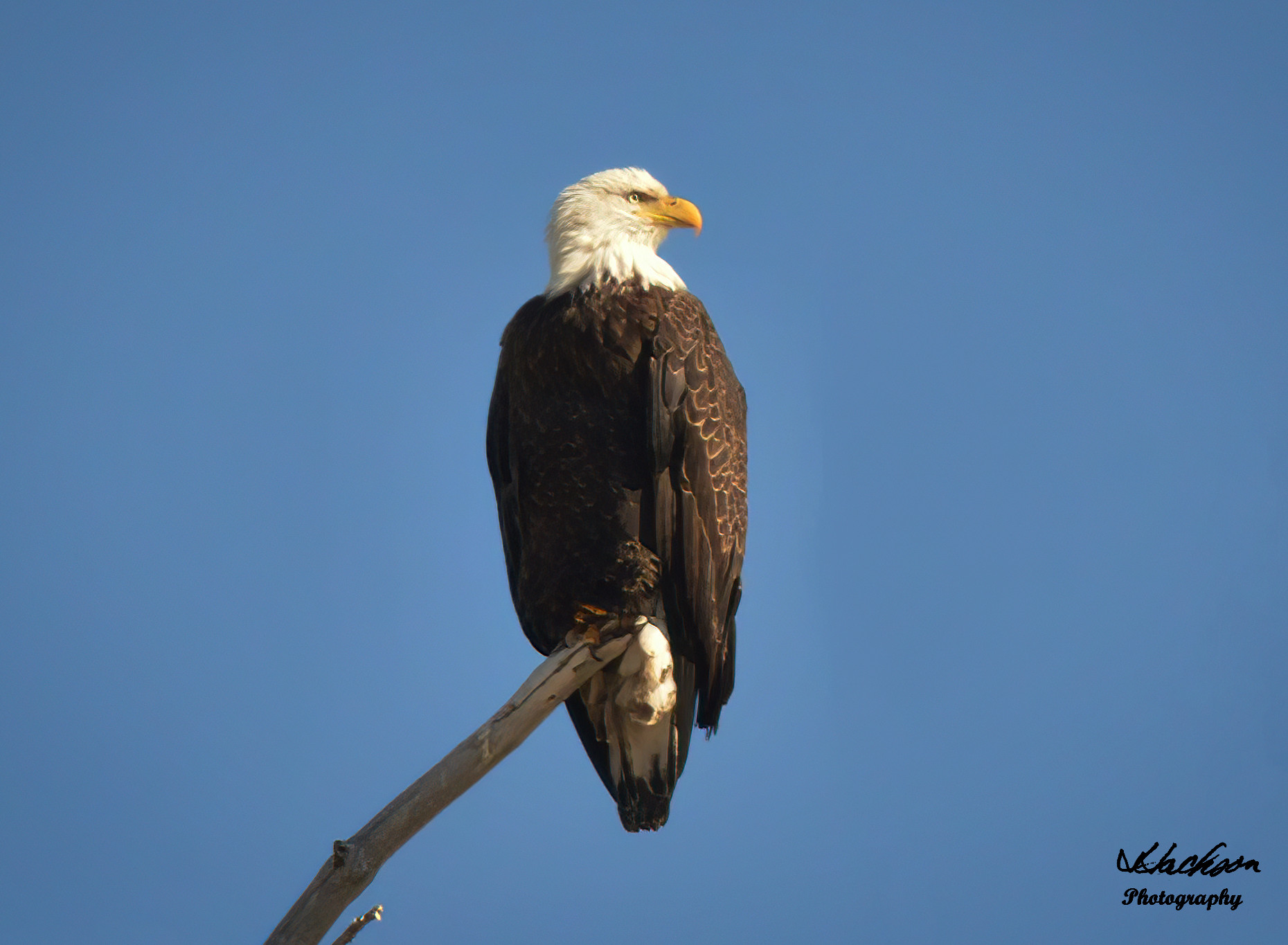 Some places in the continental USA are great for birding during winter, especially the Carson Valley town of Minden, Nevada. Every year this valley becomes a birding hot spot for several species of raptors. This event that brings numerous birds of prey to the area coincides with the annual birthing of calves in the surrounding ranchlands. 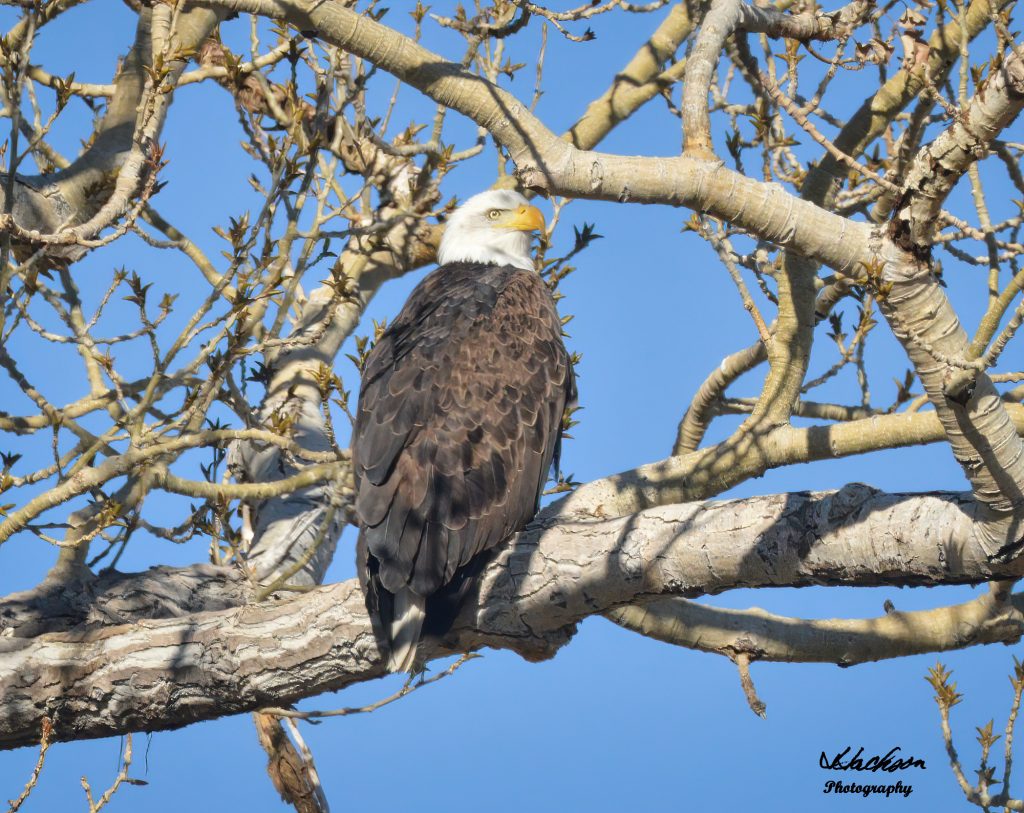 As cattle give birth, the bald eagles, golden eagles, red-tailed hawks, red-shouldered hawks, Cooper’s hawks, northern harriers, and several other species of hawks add to their nutrition during the lean months of winter by cleaning up the remains after the cows give birth. 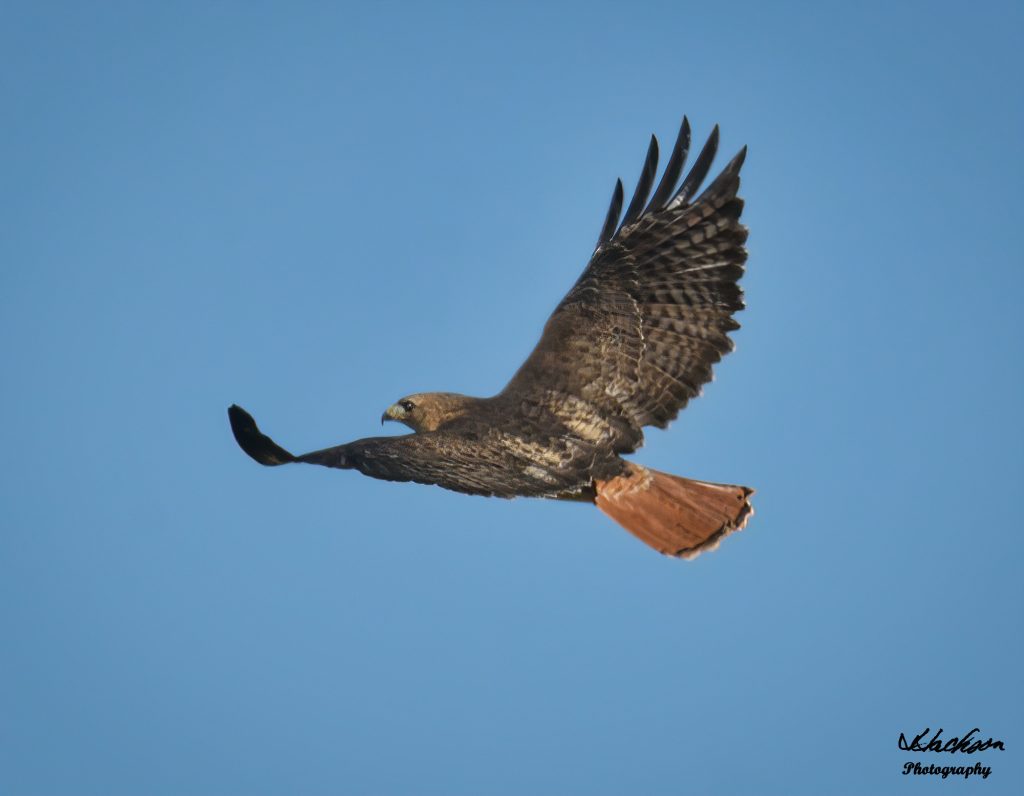 The town of Minden, Nevada lies in the picturesque Carson Valley and was named for Minden, Germany by the Dangberg pioneering family. Located along the Highway 395 corridor about 45 miles south of Reno, Nevada’s second-largest city, the town offers scenic views of the eastern side of the Sierra Nevada Mountains. 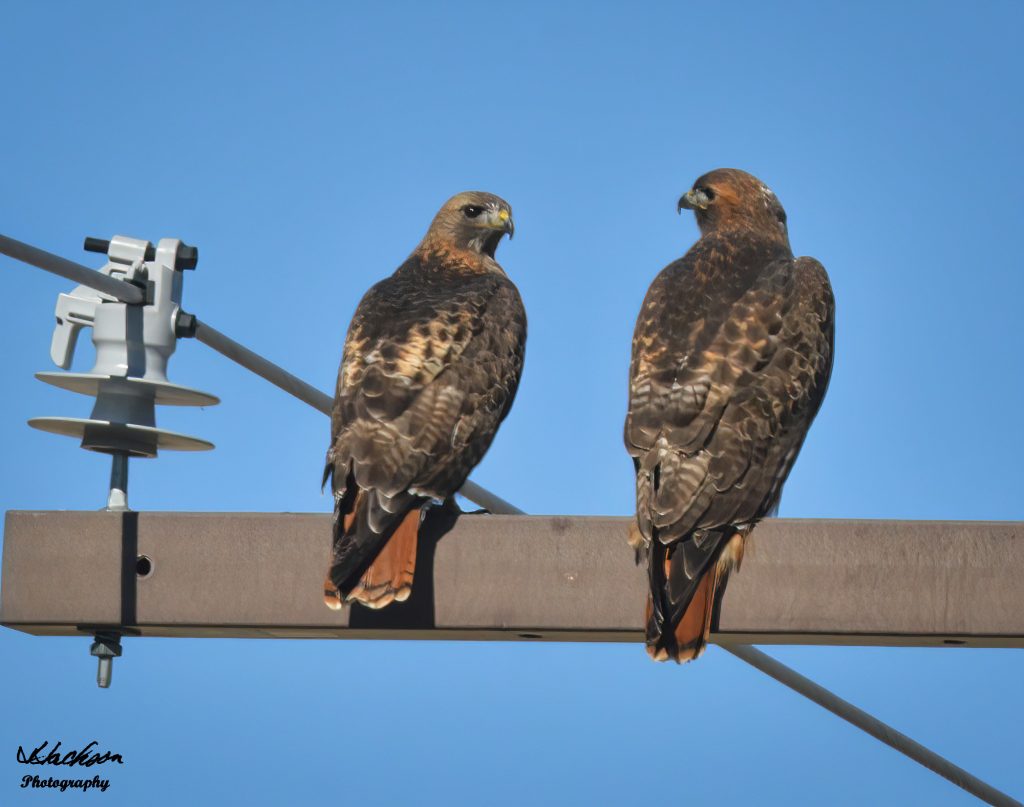 Although there are several places to enjoy birding and wildlife viewing for a fee, in general, there are numerous places to enjoy this activity in the Carson Valley without paying a fee. A drive along country roads that intersect Highway 395 will yield a variety of birds, including non-raptor species. One must, however, be mindful while pulling off the road and also merging back on. 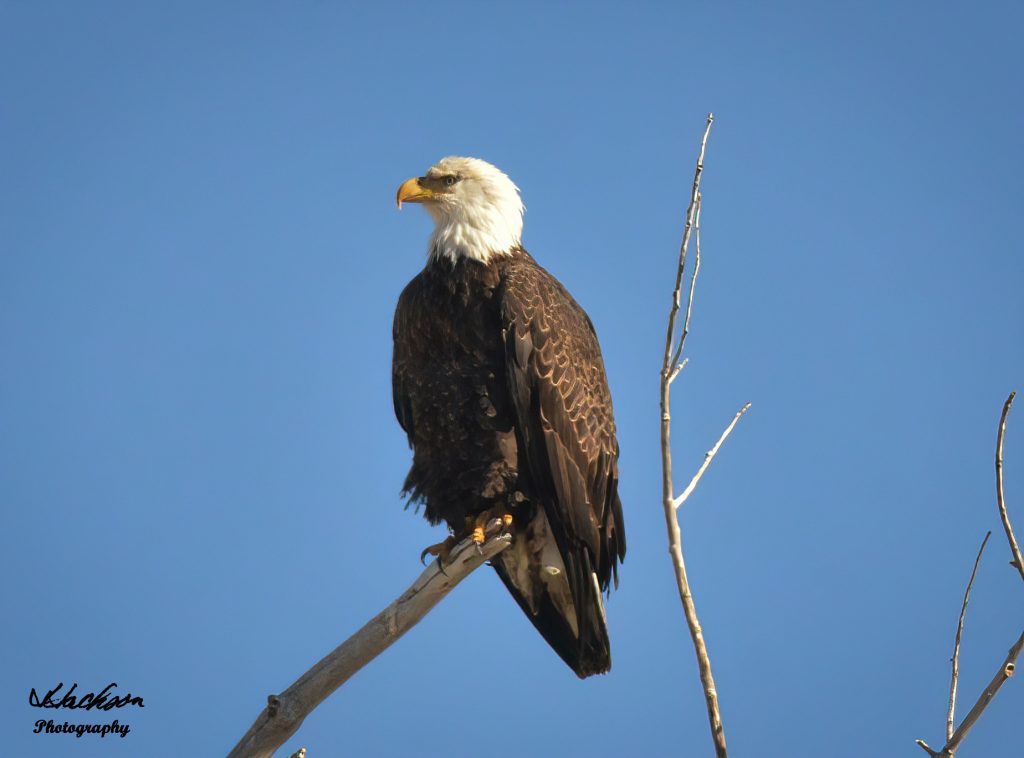 Bald eagles can be seen here in fair numbers. Binoculars, spotting scopes, and telephoto lenses greatly help in viewing these birds. The best to find them is to look for clusters of cattle where you can typically find the eagles and hawks as they scavenge the afterbirth. Keep an eagle eye out for coyotes who also scavenge the area. 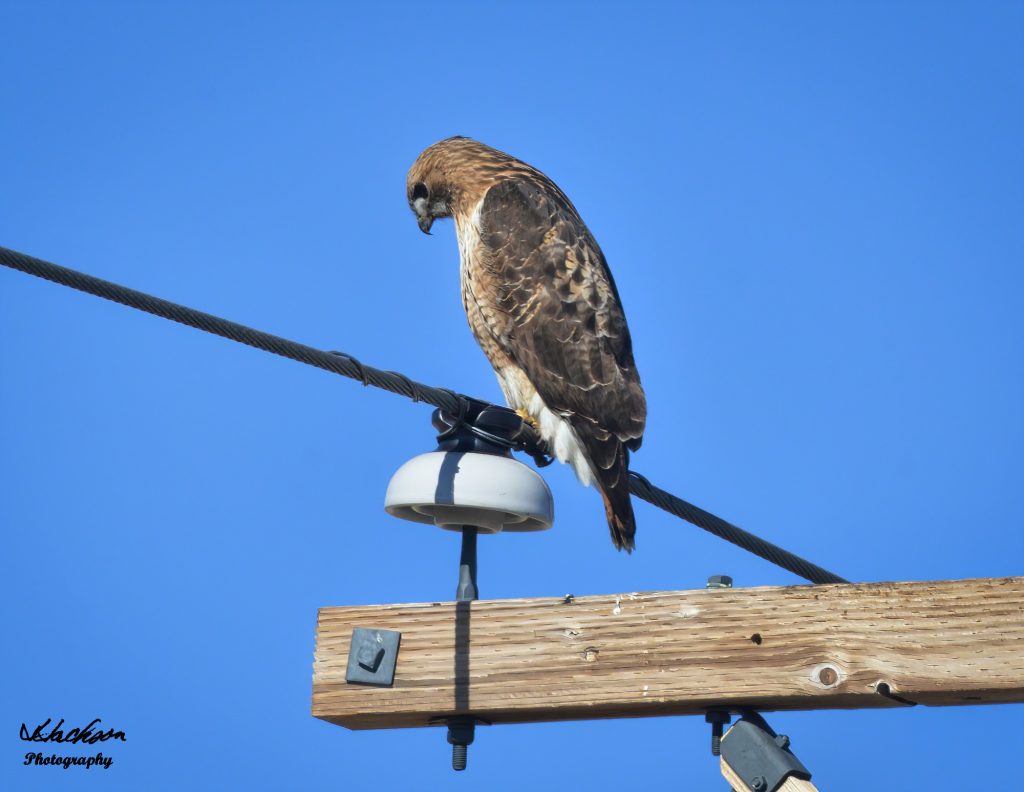 Not all birds of prey in the area spend their time scavenging and would rather capture their meals the old-fashioned way. Above, a sharp-eyed, red-tailed hawk watches for movement in the tall grasses below. 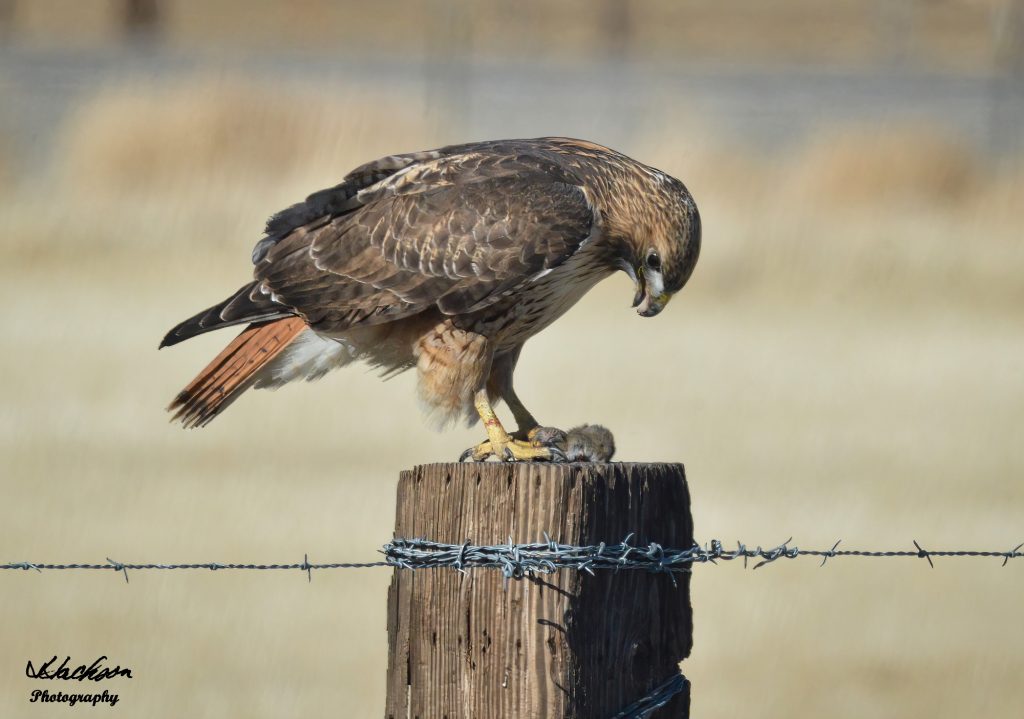 Within minutes it pounces on a hapless victim. 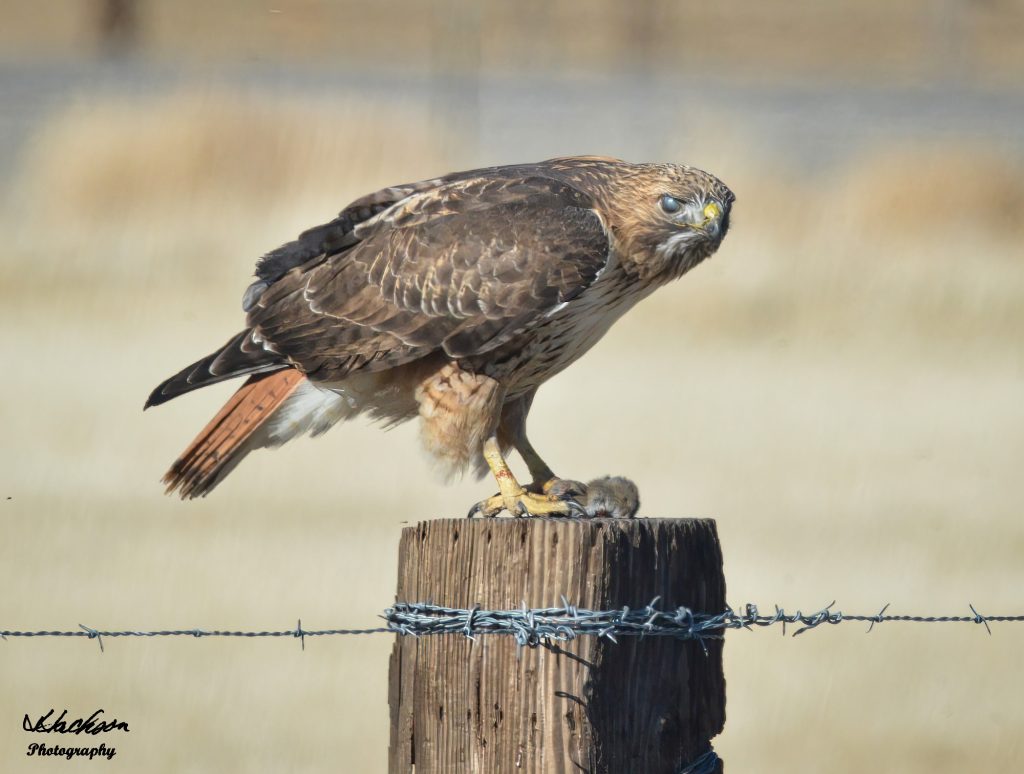 While dispatching its prey, the hawk’s nictitating eyelid covers the bird’s eye to prevent an injury. 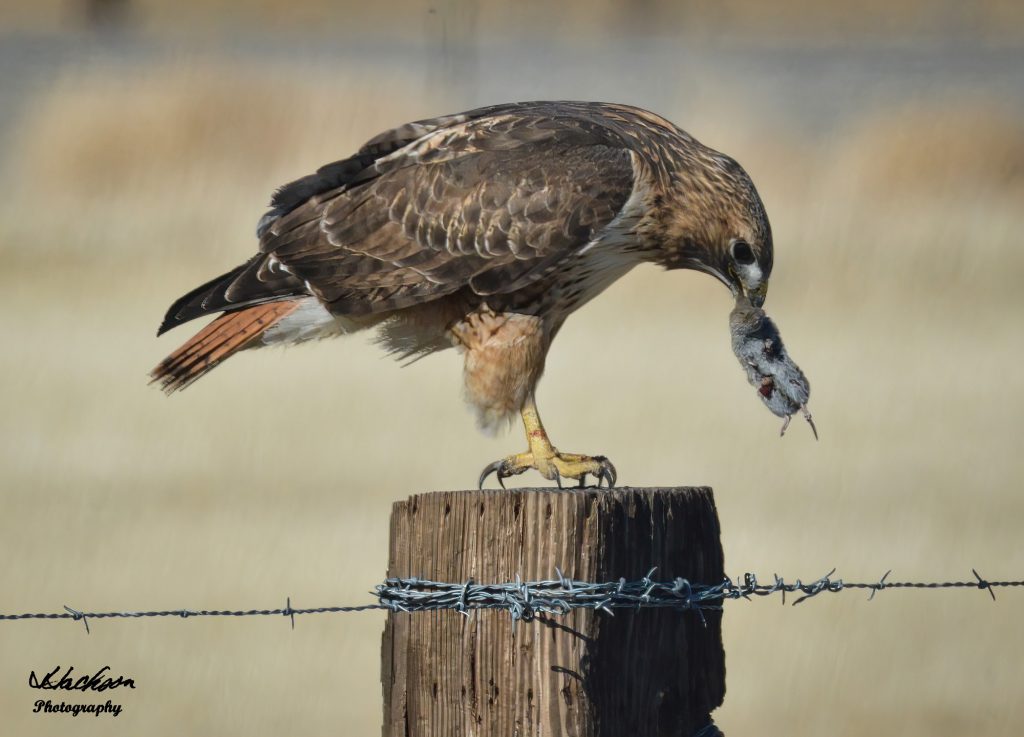 Hawks and eagles provide a great benefit to the environment by keeping the rodent population in check. 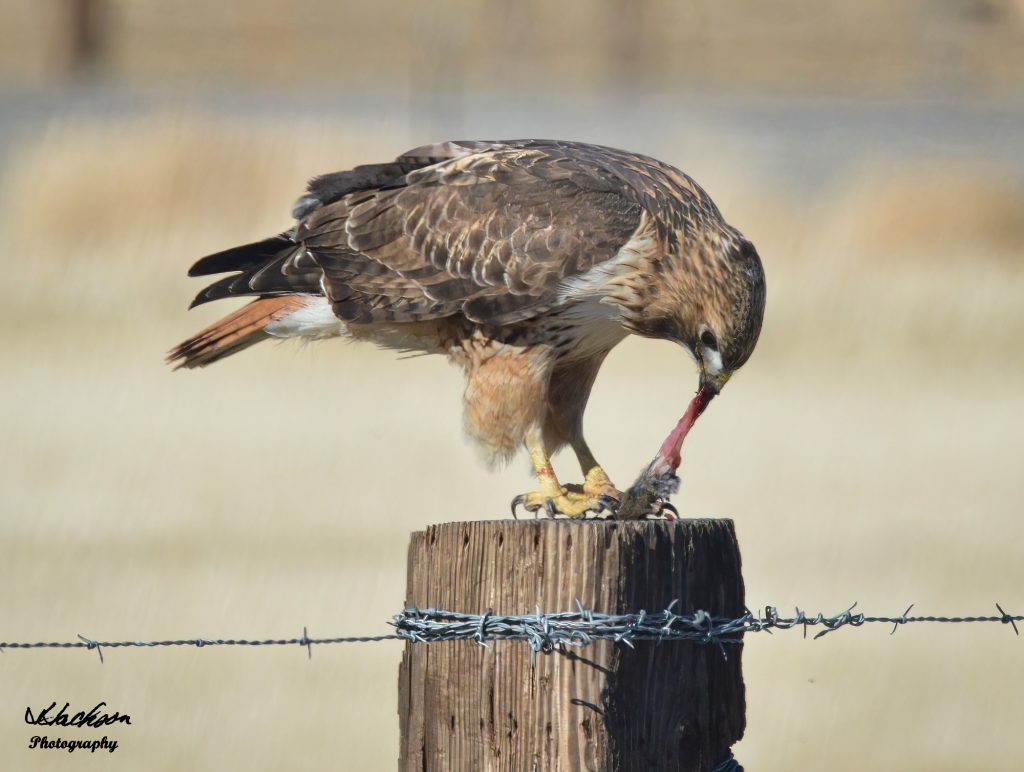 As a photographer, birder, naturalist, or observer of nature, Minden, Nevada offers many opportunities to get up close to numerous subjects. However, you must remember that these creatures are in a season when food supply is limited so be mindful to maintain a distance so as not to stress them. 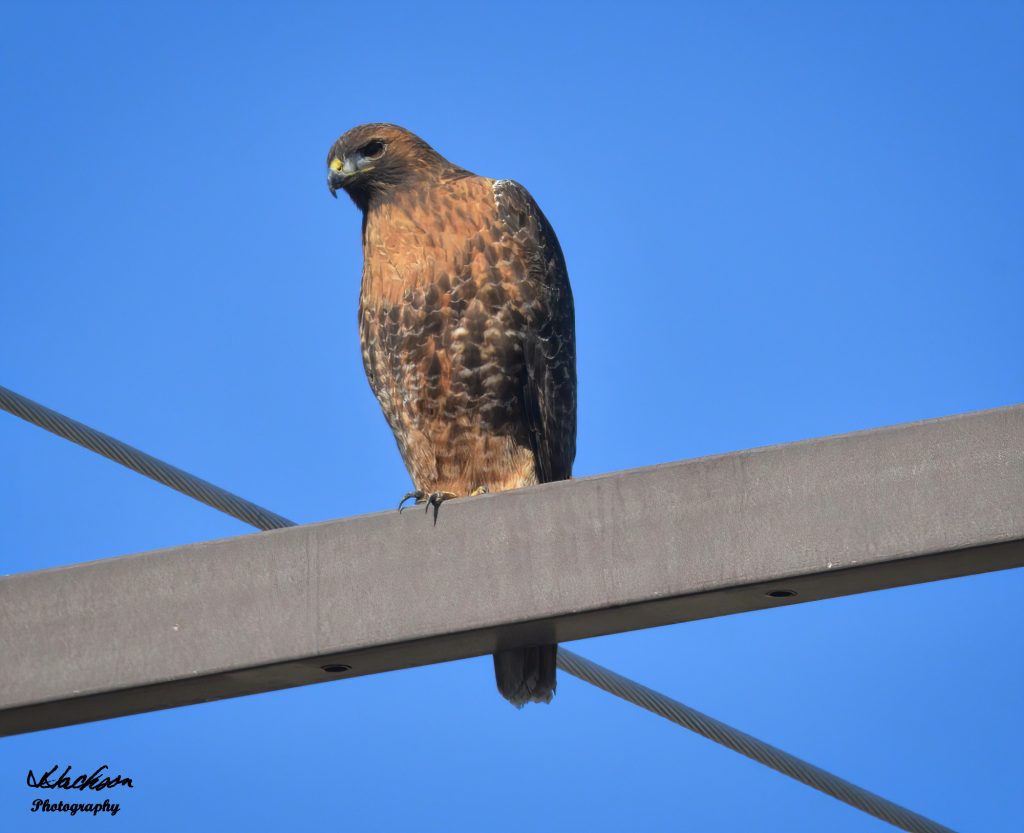 In this valley of the birds of prey, you will find not only a host of different species but also a great variety of the same species, including dark and light morph hawks. 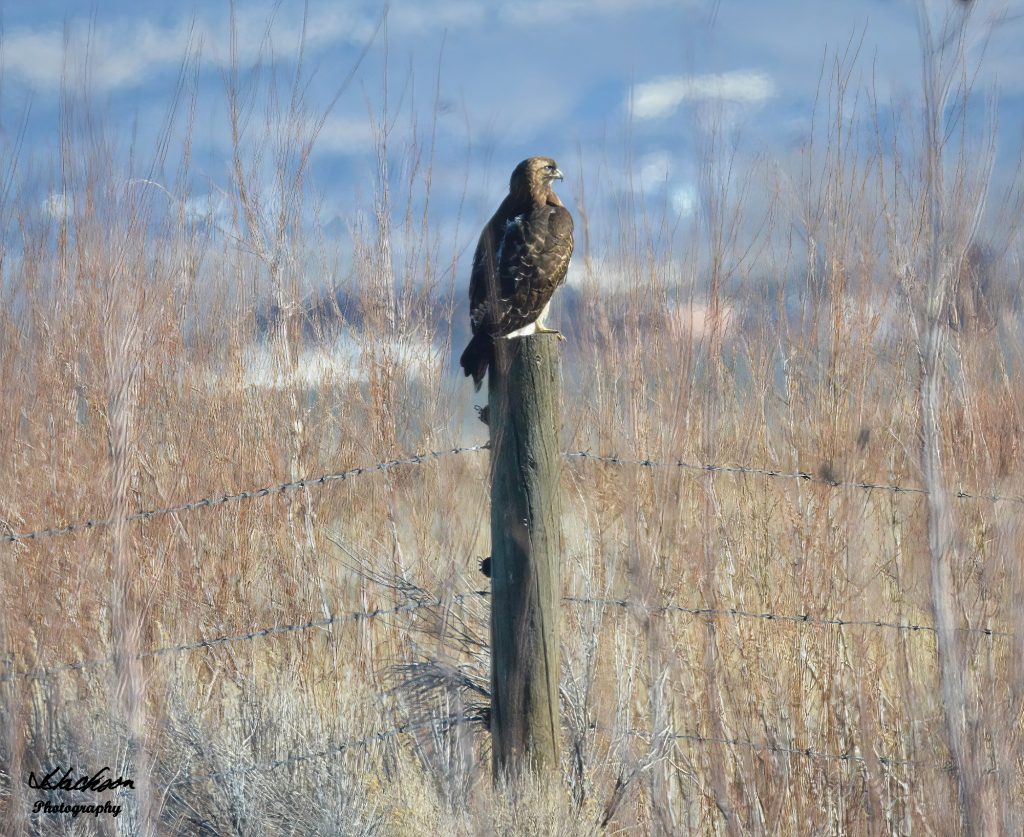 Telephone poles and fence posts provide great vantage points for the raptors and if you keep a sharp eye open, you can view them as they scout the surrounding landscape for a meal. 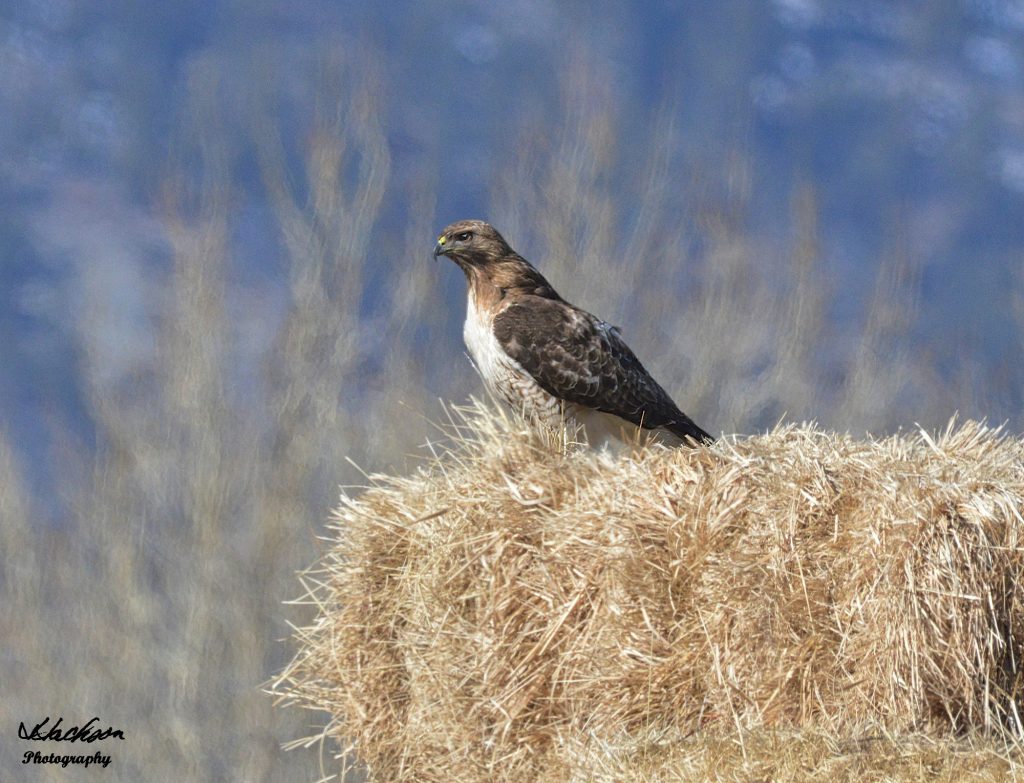 It is not unusual to spot eagles and hawks in strategic places as they survey cattle herds where the female cows are giving birth. Keep your distance as they will most likely see you before you see them and be aware that although you are observing them for pleasure, they are doing so for survival during the lean winter months. 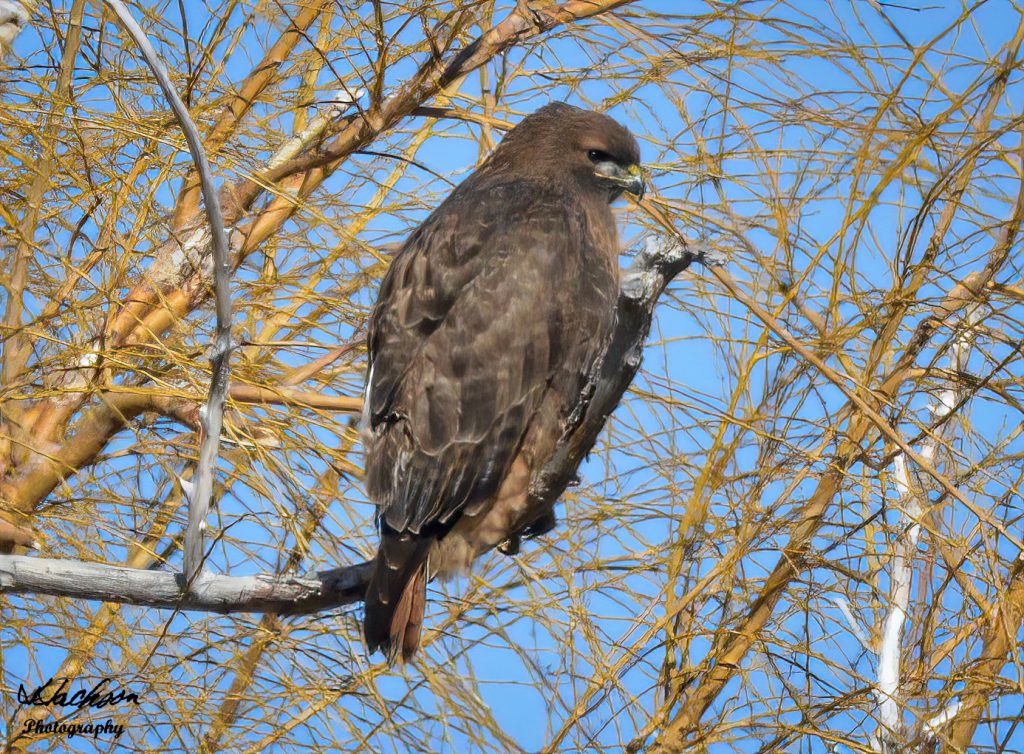 As you observe the birds in the Minden area you will note the great variety within certain species, particularly in the red-tailed hawks. There are profound differences between juveniles and adults, both male and female. Some are very light while others are so dark to you have difficulty identifying the species until it flies off and displays its characteristic red tail. 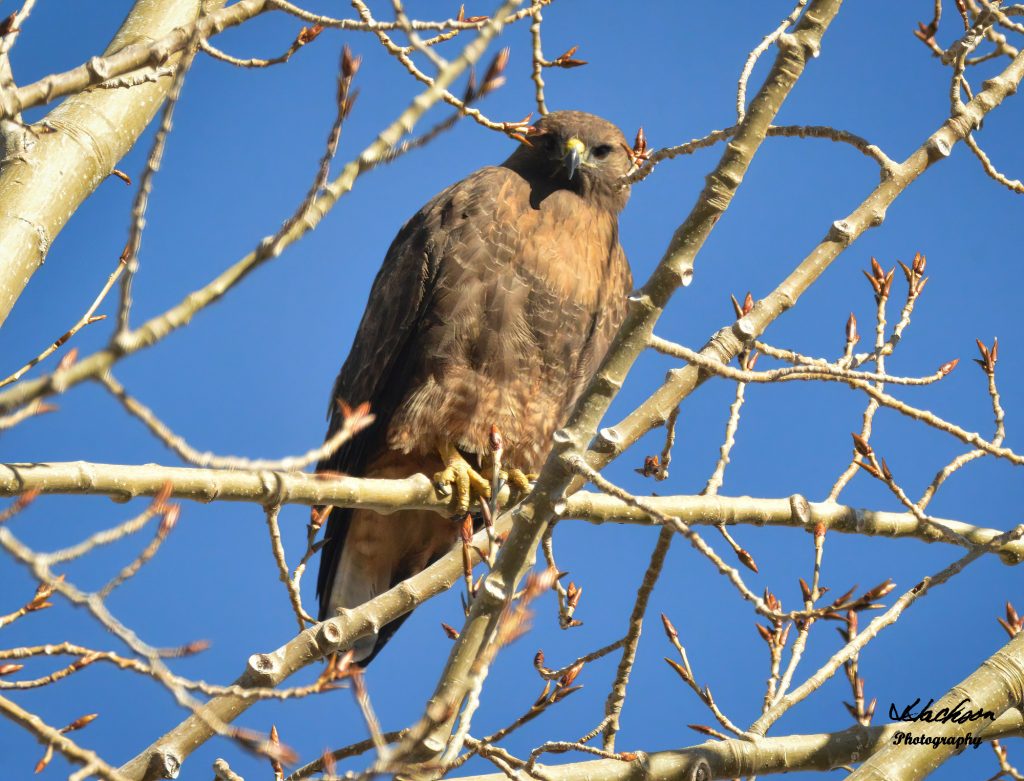 Minden is a great place to study birds of prey and to get acclimated with the numerous varieties of each species and it is a great area to learn about their subtle differences. 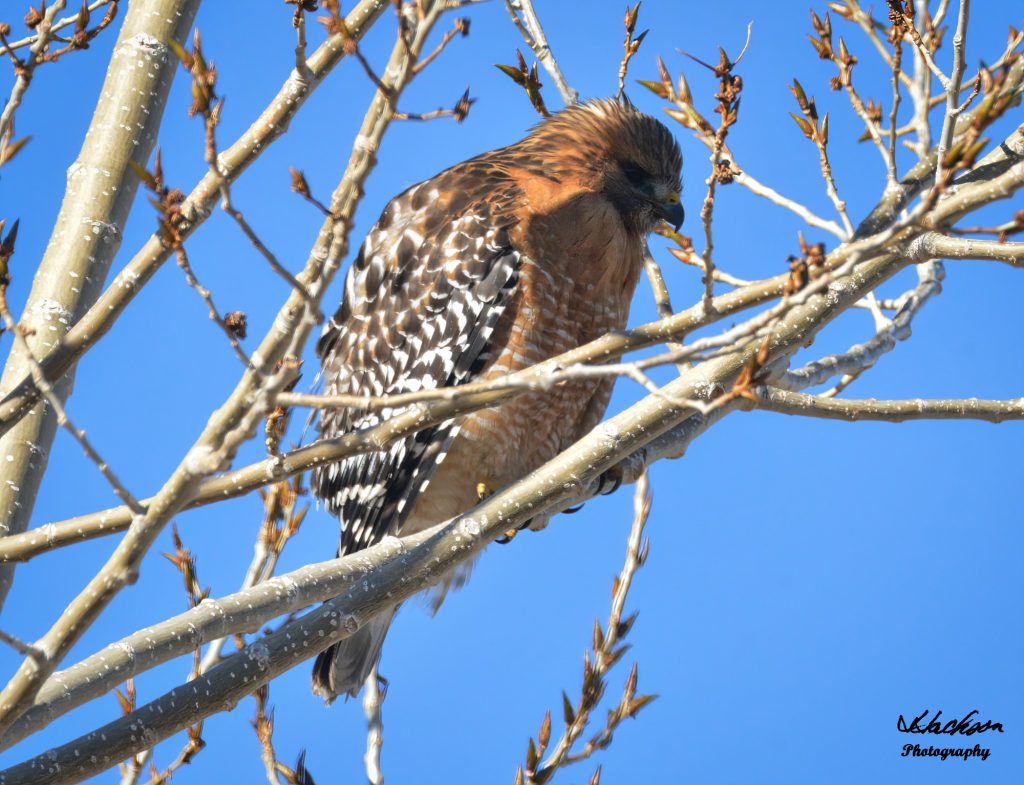 Red-shouldered hawks, above, are also part of the local bird of prey environment. They are easy to distinguish from their red-tailed cousins. 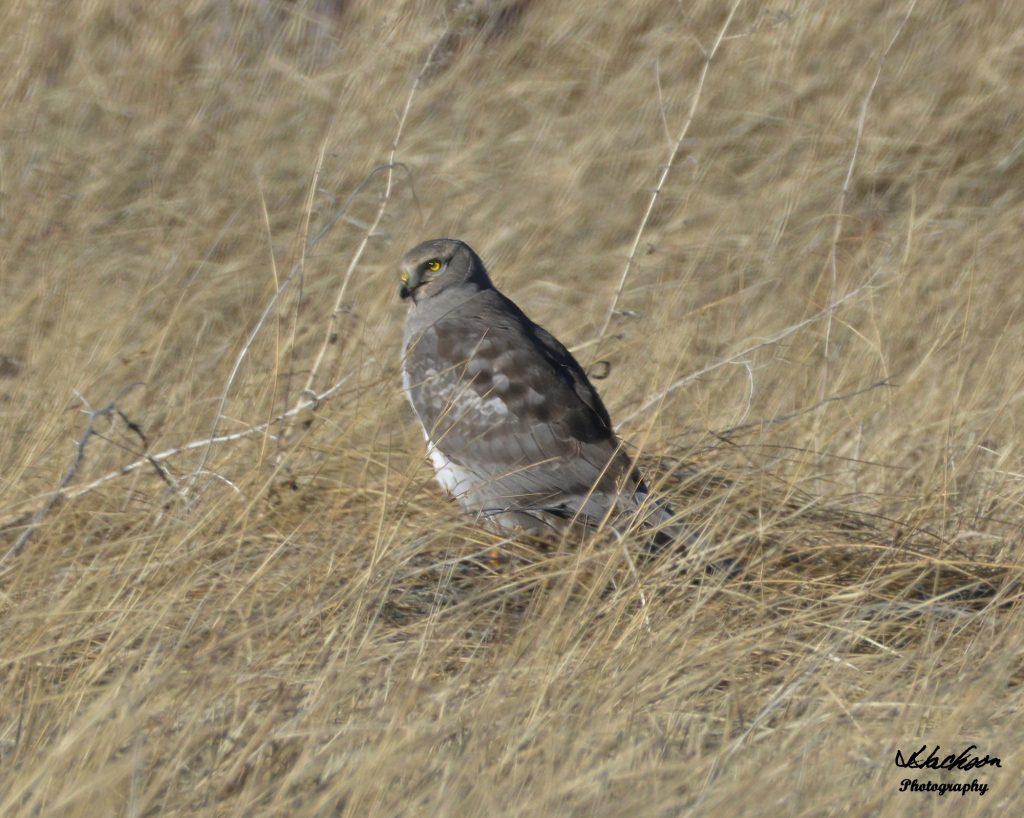 The light gray color of the male Northern Harrier has earned them the nickname of “gray ghost.” These hawks have an owl-like appearance and from a distance are sometimes confused as being an owl. 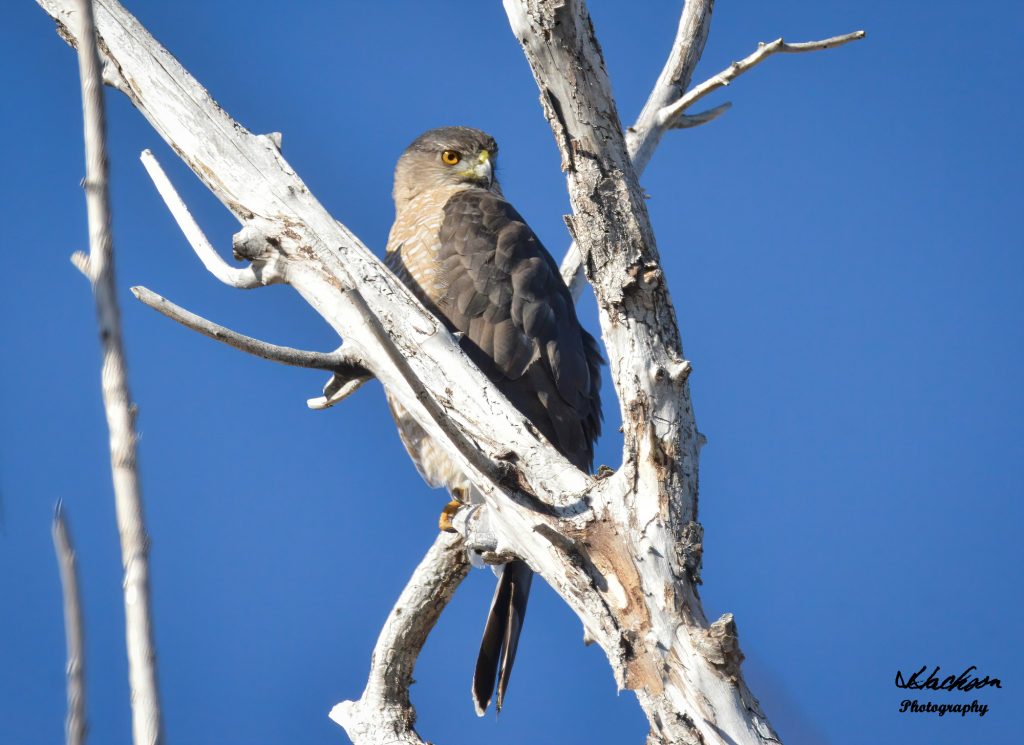 Cooper’s hawk, above, is a medium-sized hawk native to the North American continent and can be found from southern Canada to Mexico. This agile hawk can be found sitting in the trees of the Carson Valley and as in many birds of prey, the male is smaller than the female. 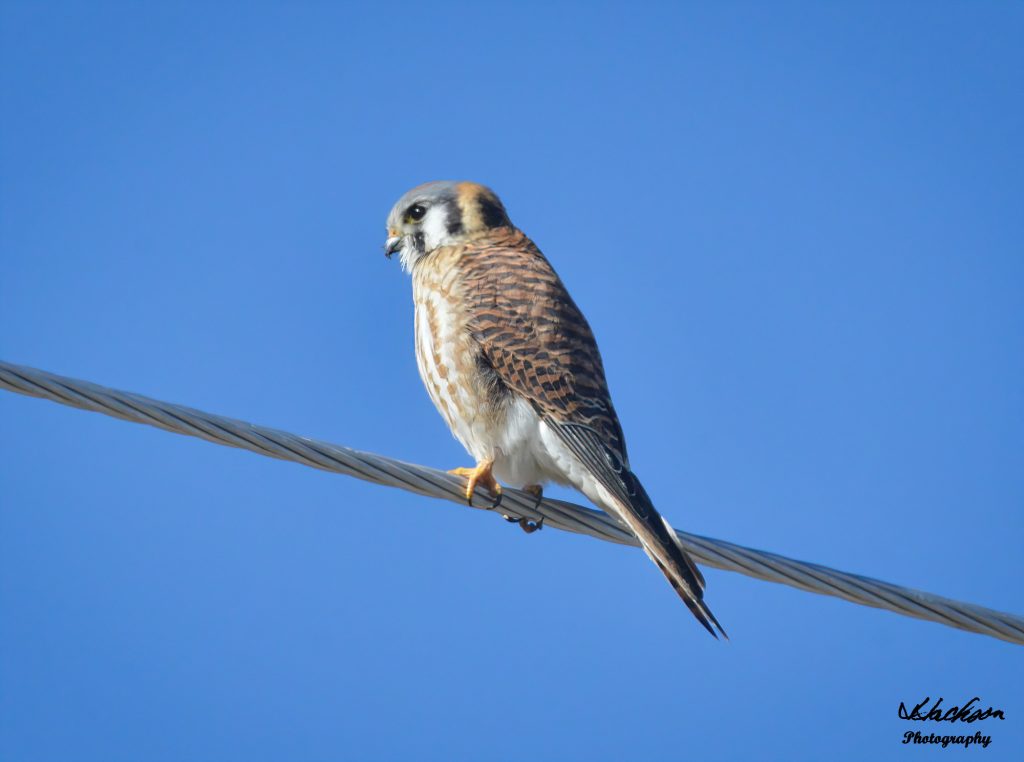 Although North America’s littlest falcon, the American Kestrel, is not in the valley for the same specific reason as the larger birds of prey, it can nonetheless be found in many places around Minden. It is known as a predator with fierce intensity packed into its small body and is considered by some to be one of the most colorful of all raptors. 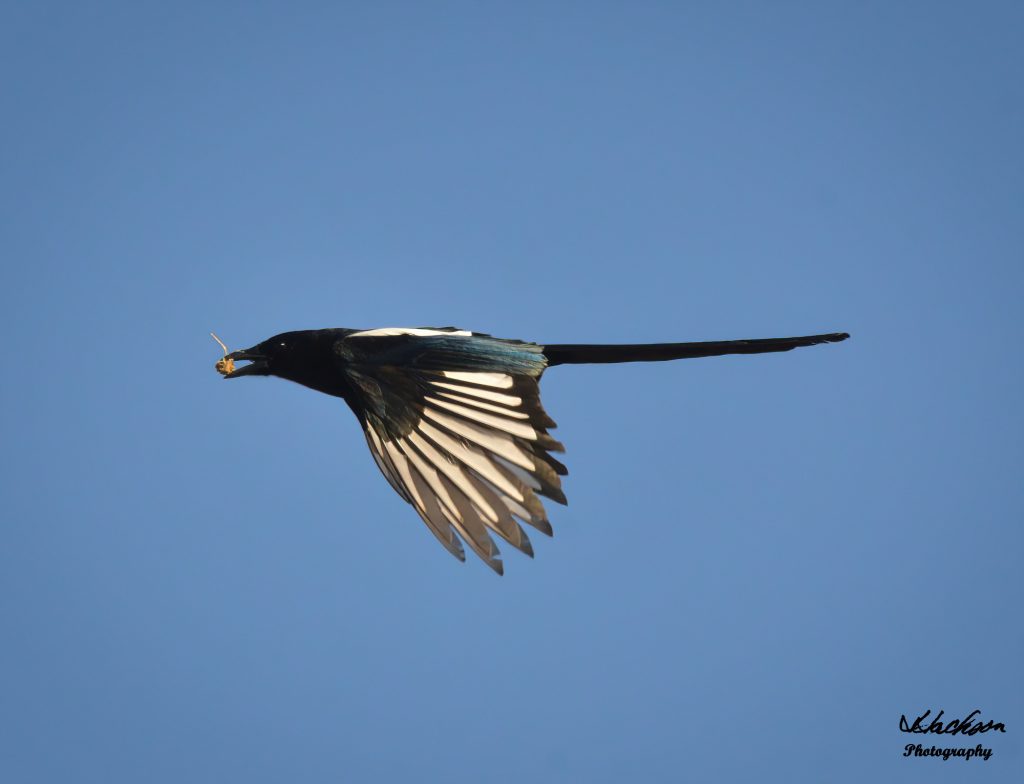 Not only can a wide assortment of raptors be found in the Minden area but numerous other bird species like the black-billed magpie. 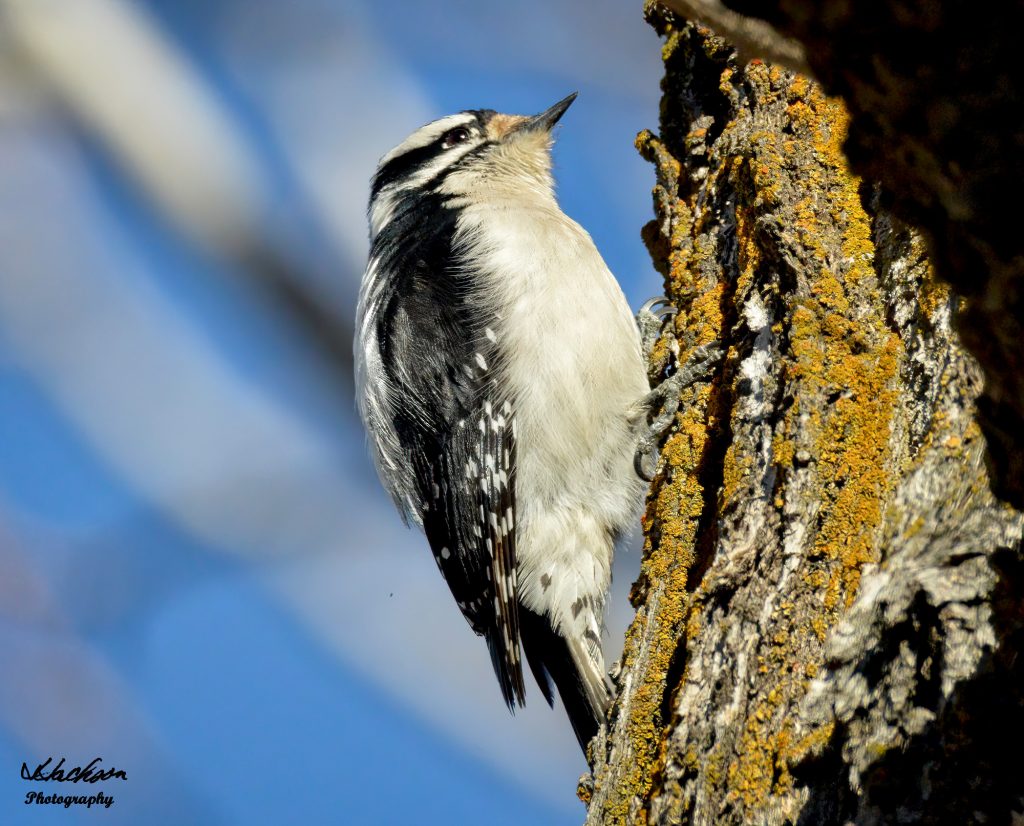 Several varieties of woodpeckers can also be found such as this downy woodpecker seen in the park at Genoa which is not far from Minden. 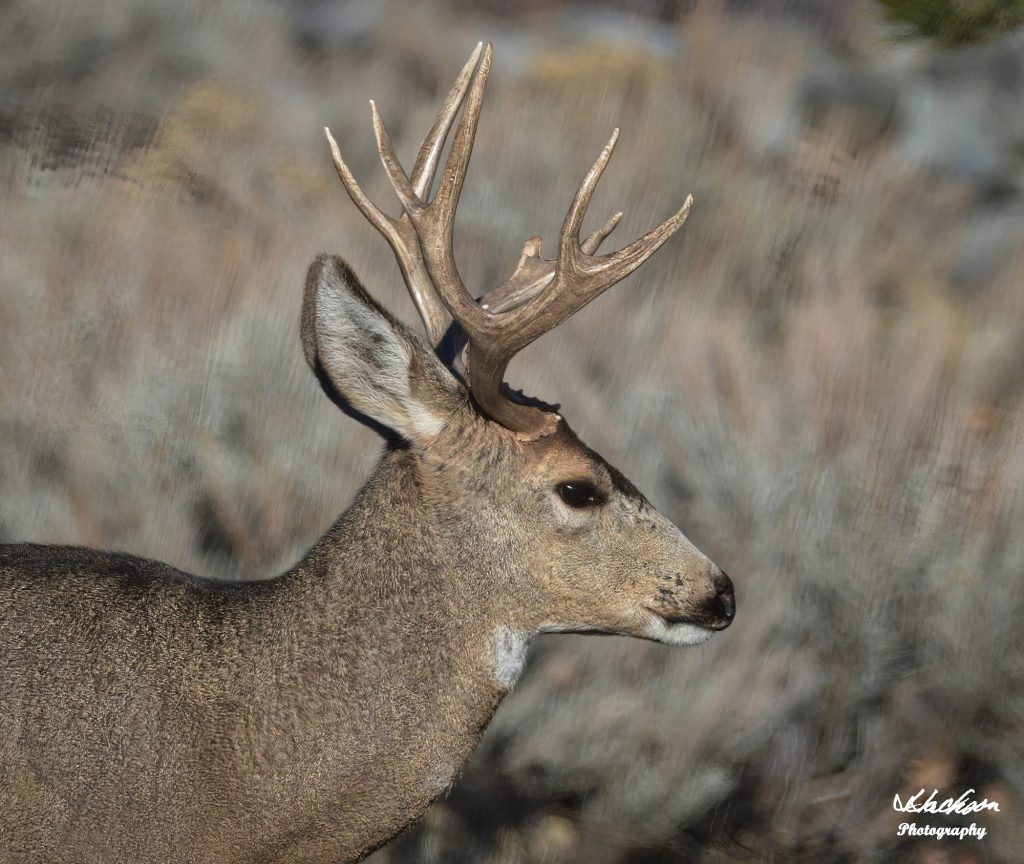 Genoa is pronounced “juh-NO-ah” not “JEN-o-wah” and for a time was called Mormon Station, Its claim to fame is that is home to the oldest bar in the state of Nevada which opened in 1853. It is also a fine area in which to observe mule deer. 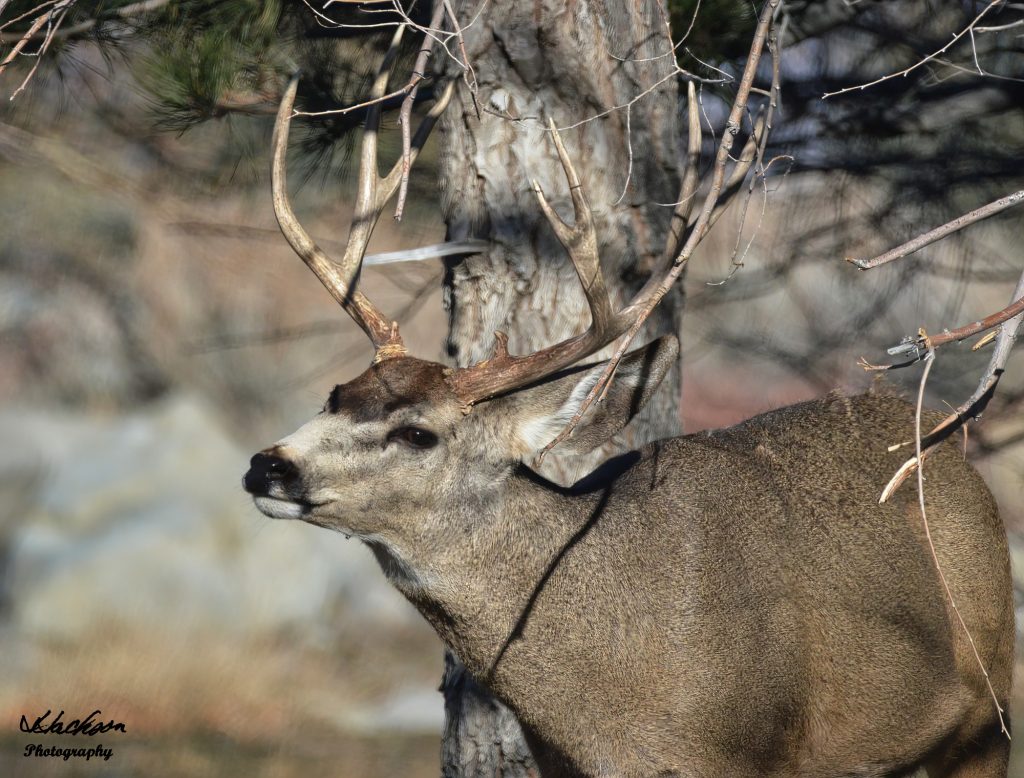 No matter if you are here for the birds, the wildlife, or just getting away from the rat race, even for a little while, the Minden area is a special place to visit. It is a great place to add more drops in your bucket of things to do in your lifetime. On top of that, the gas prices are so much lower than in nearby California!

All photographs are the copyright of Jim Jackson Photography. Please contact me with any questions, comments, or authorization to use photos or for signed, high-resolution prints.