Kofi Baker: A Tribute to his dad Ginger Baker 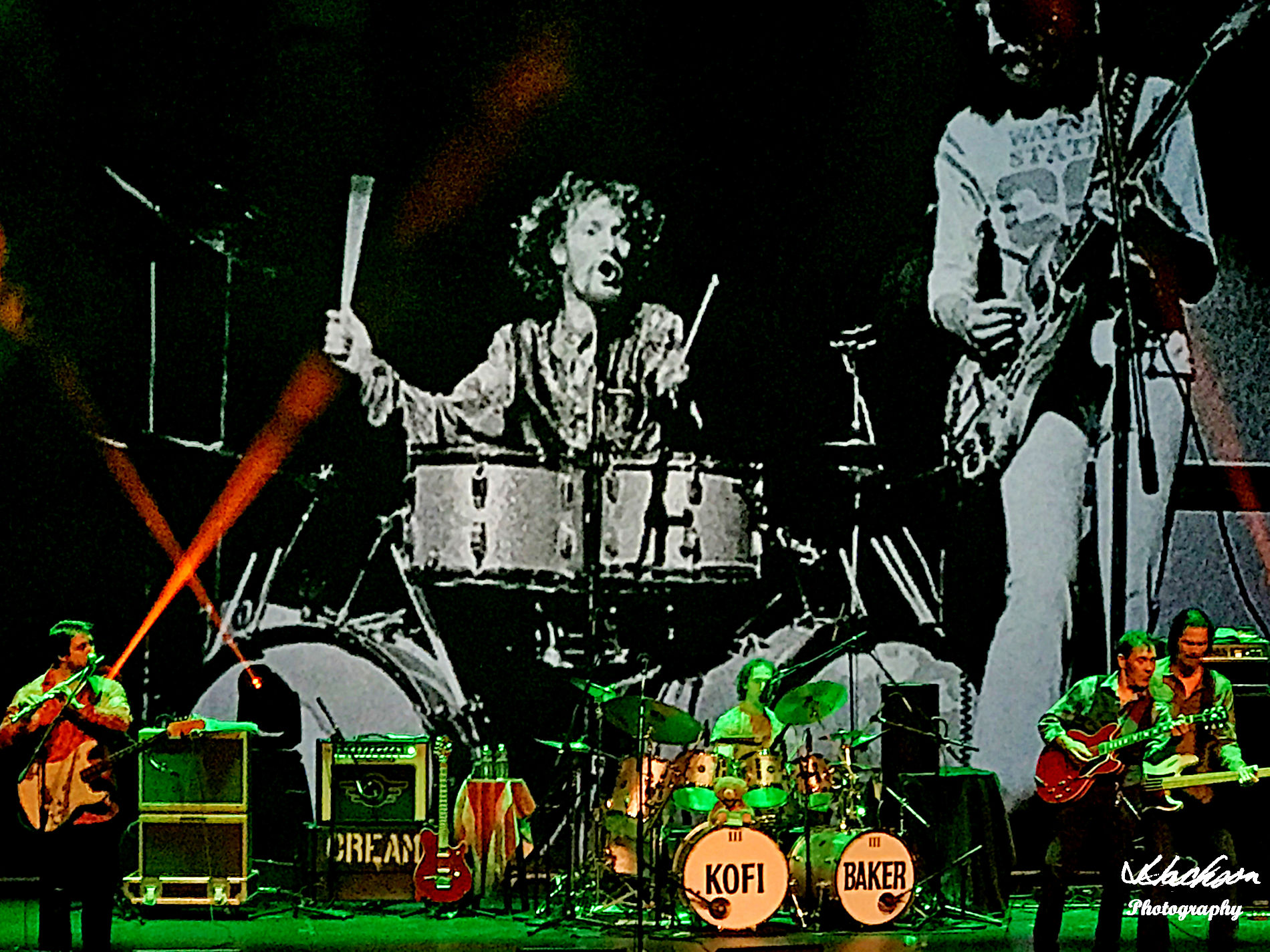 This concert and the tour is a tribute to the legendary drummer Ginger Baker who passed away on October 6, 2019. The concert featured the band of Ginger’s son, Kofi Baker, an equally remarkable drummer.

This particular concert has been a lot of time waiting as the group has not had many swings to the west coast, playing primarily in the east coast area and in Europe. They had recently played in a tribute concert in England for Kofi Baker’s dad Ginger Baker. That particular concert featured many of the legendary musicians that either knew Ginger or played with him, like former bandmate Eric Clapton. 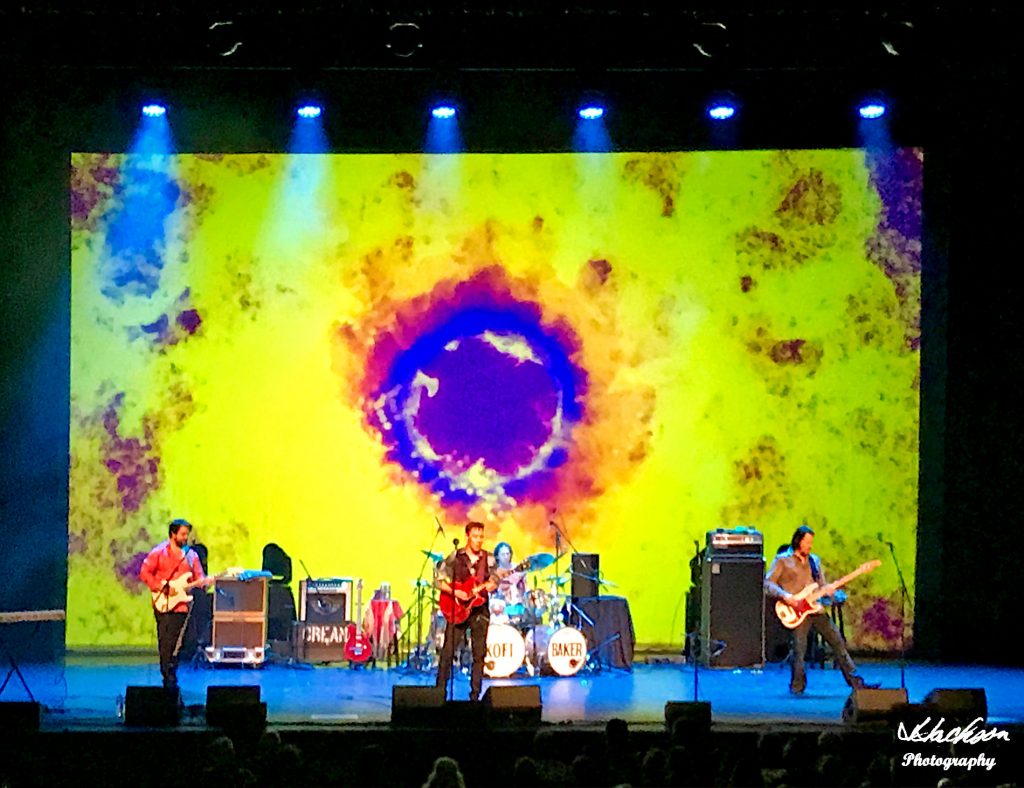 Although music is a great passion of mine, going to concerts no longer has that great of an appeal to me. Oh sure, the experience of a live concert by a really good band is hard to beat, but going to those large and crowded venues has lost me. Nowadays I prefer going to smaller clubs and small theaters and concert halls. More especially since smoking is prohibited in them. 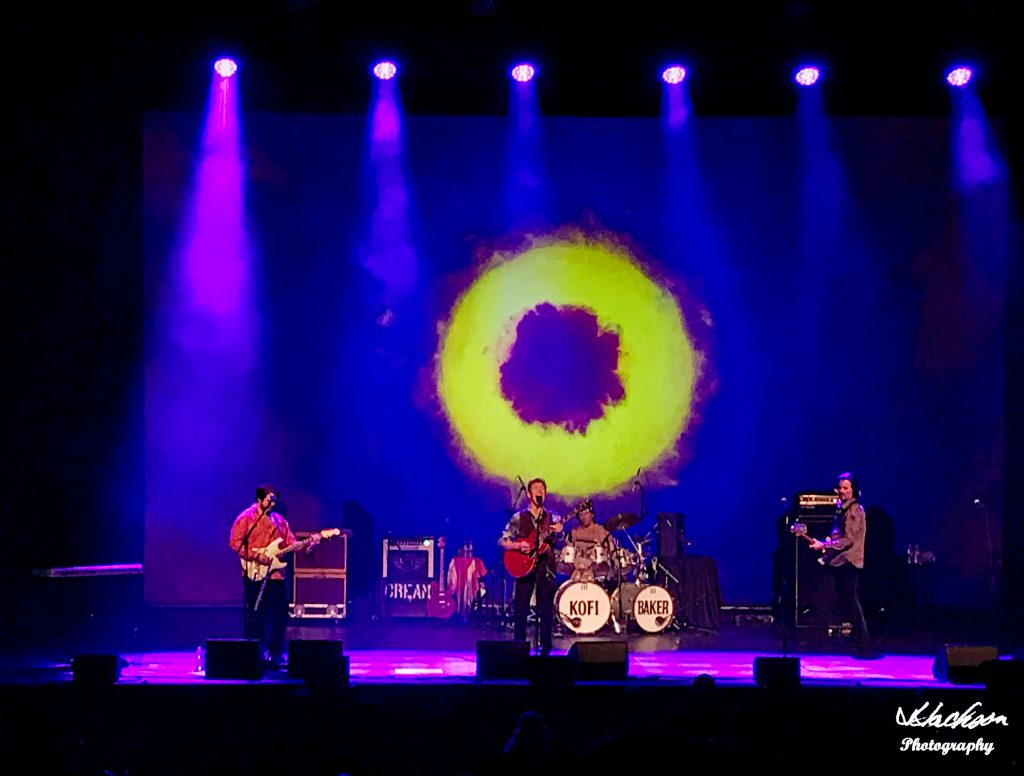 For this long awaited concert we went to the the Harris Center on the campus of the Folsom Lake College in Folsom, California. The theater complex has three separate stages with stage one holding 850 patrons, stage two holding 200 seats and stage three being more intimate with only 100 seats. The Kofi Baker concert was held at stage one. 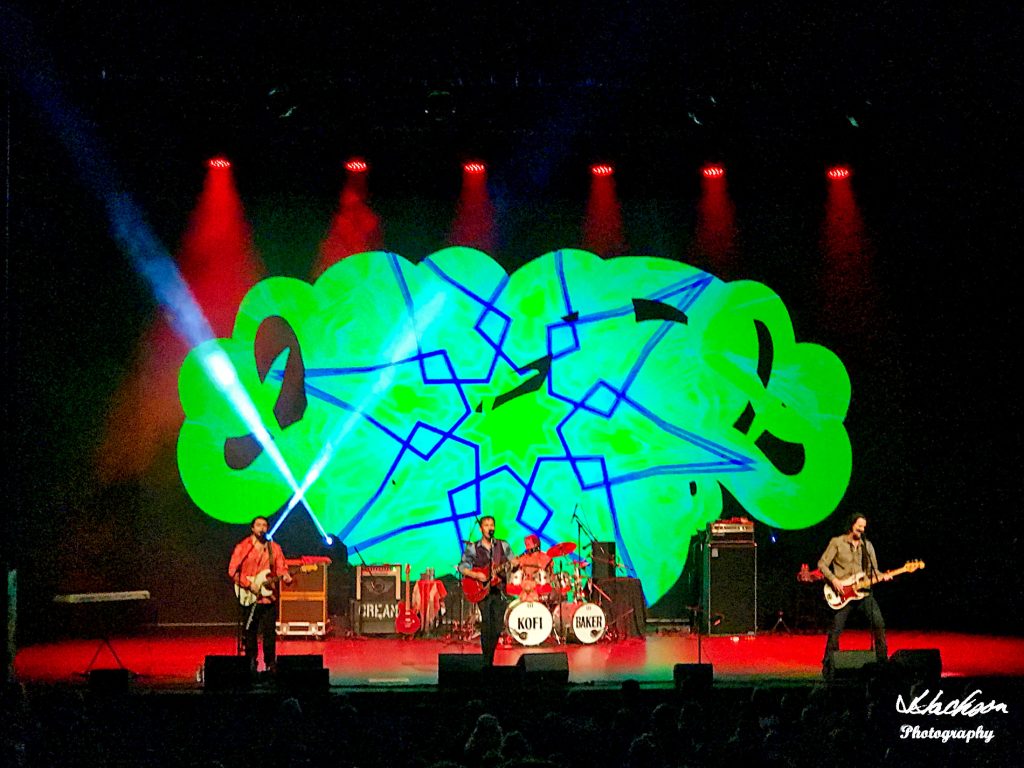 The four member band are more than just a remarkable tribute band that plays the music of the legendary band Cream and of super rock star Eric Clapton. Oh no, these bandmates have the pedigree and DNA from the members of those bands and musicians. 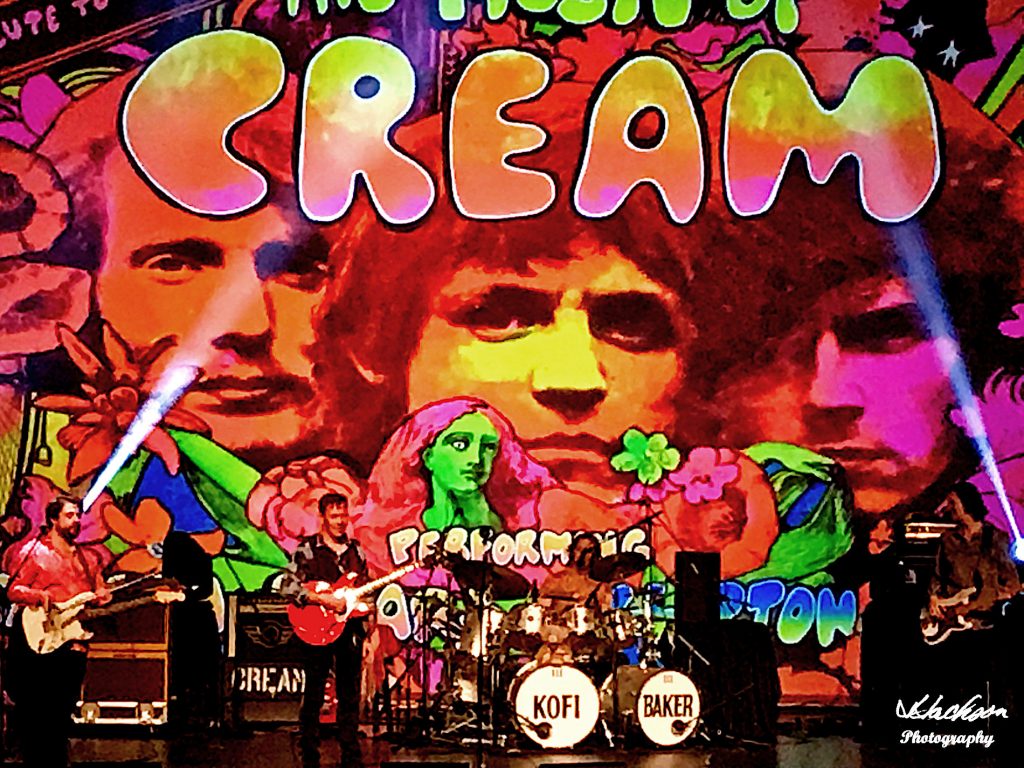 The Music of Cream began as a project in 2017 and a was followed by several concerts in Austrailia and New Zealand to commemorate the 50th anniversary of Cream, the band that was formed by Jack Bruce, Eric Clapton and Ginger Baker. 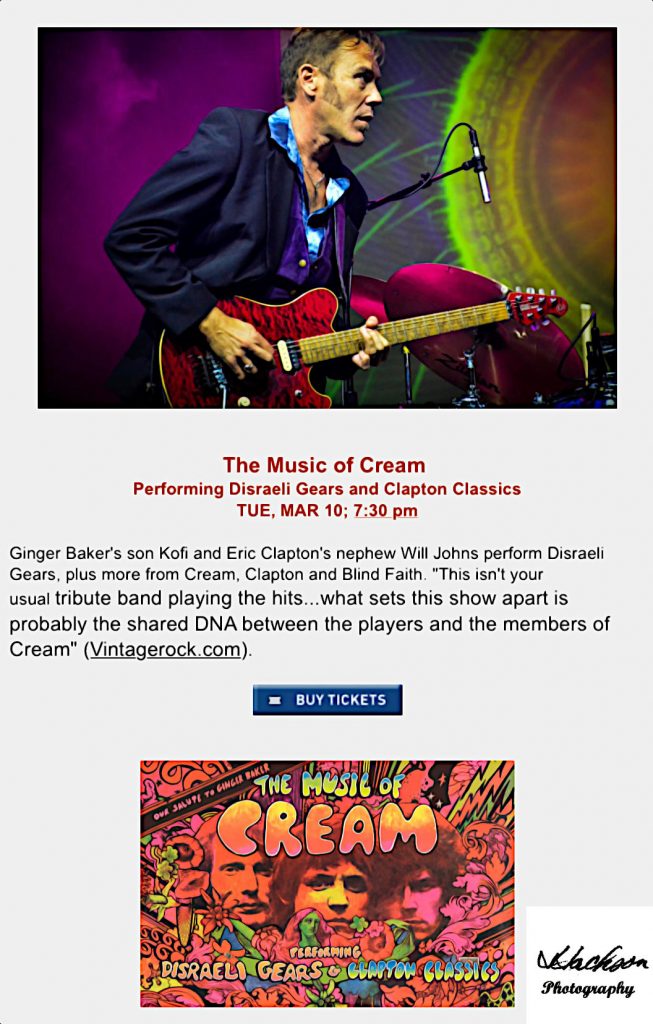 Above, the playbill from the concert at the Harris Center. 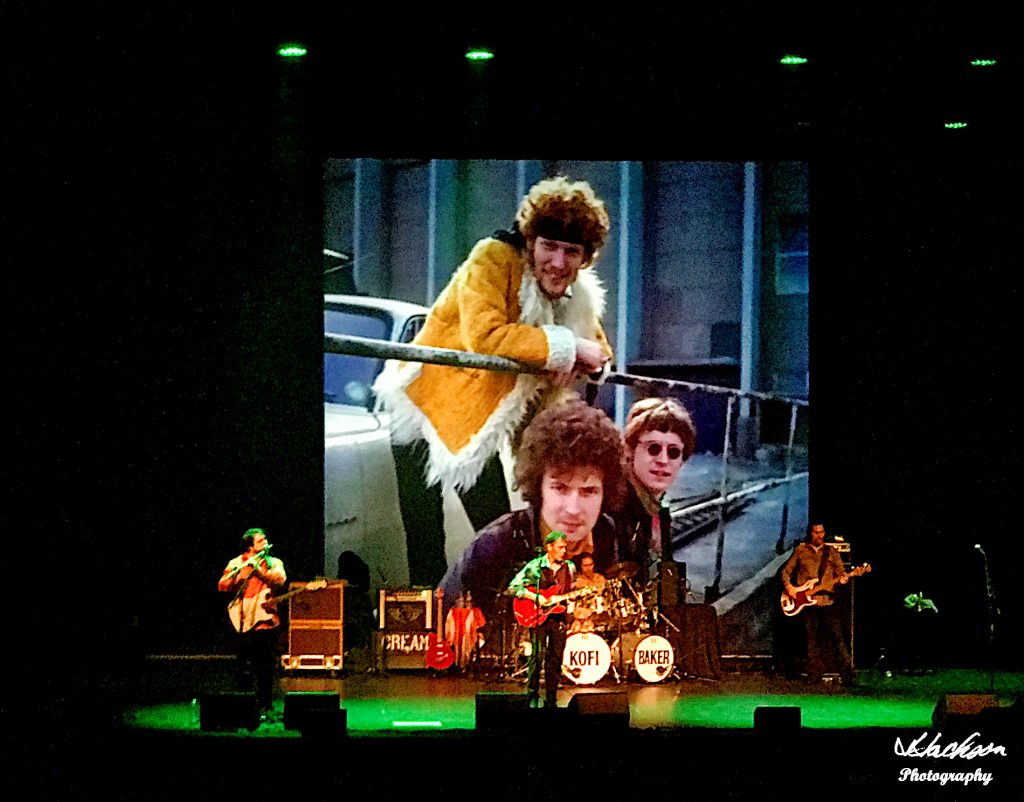 The genetic makeup of the band features Kofi Baker, the son of Ginger, on the drums. On guitar is Will Johns, the nephew of Eric Clapton through his ex-wife Patty Boyd’s sister Paula Boyd and music producer Andy Johns, of Led Zeppelin and Rolling Stones fame. 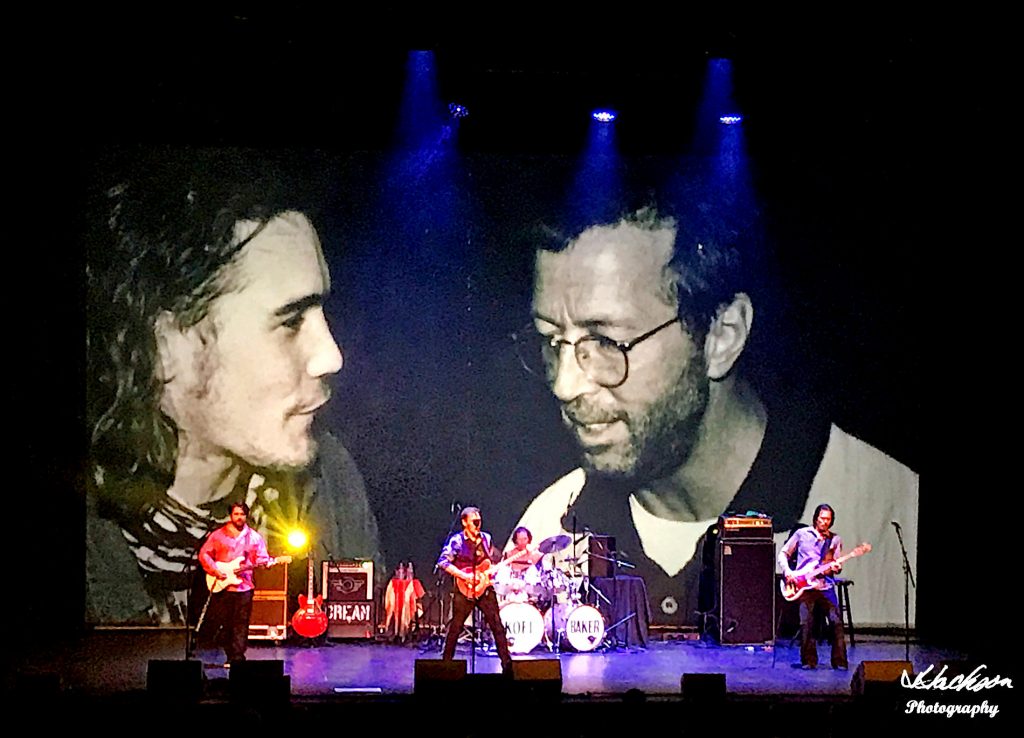 Will Johns was encouraged at an early age to play the guitar. His uncle was Eric Clapton who had caught him playing the drums at his house one early morning. Clapton told the kid that he “should learn a proper instrument.” His other uncle was the famous recording engineer Glyn Johns of Eagles, Eric Clapton and Who fame. If that wasn’t enough musical DNA, his other uncle was Mick Fleetwood. All played a huge role in his musical direction. 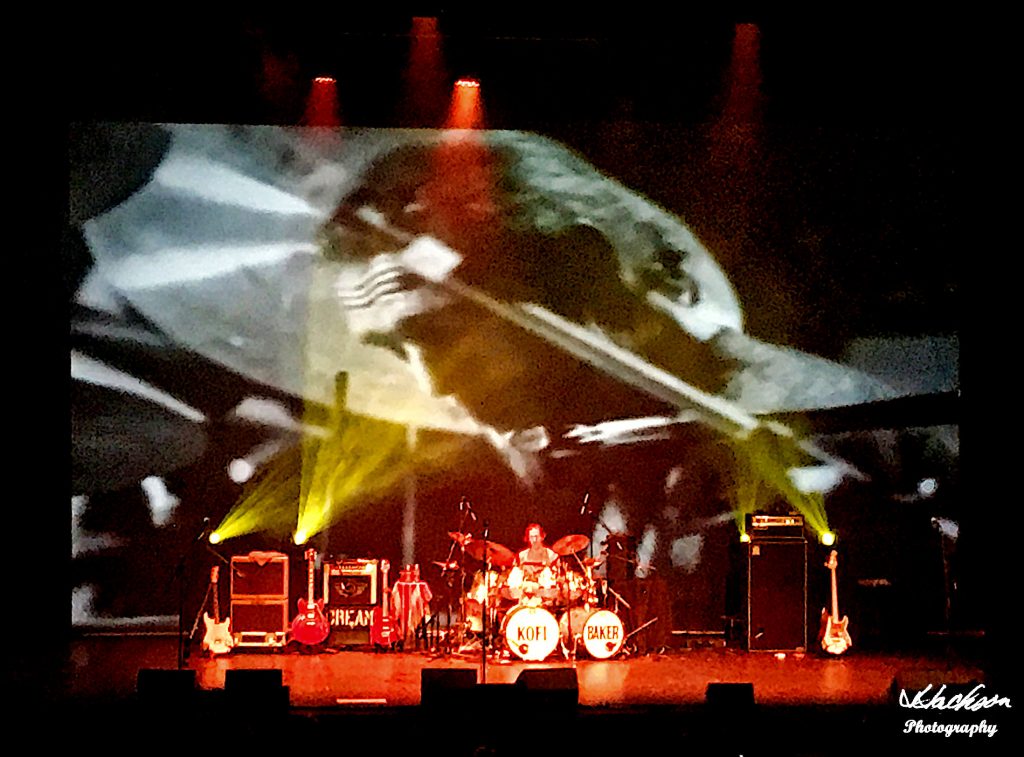 Along with talented musicians Sean McNabb and Chris Shutters, the center stage clearly belongs to Ginger Baker’s boy, Kofi Baker on the drums. 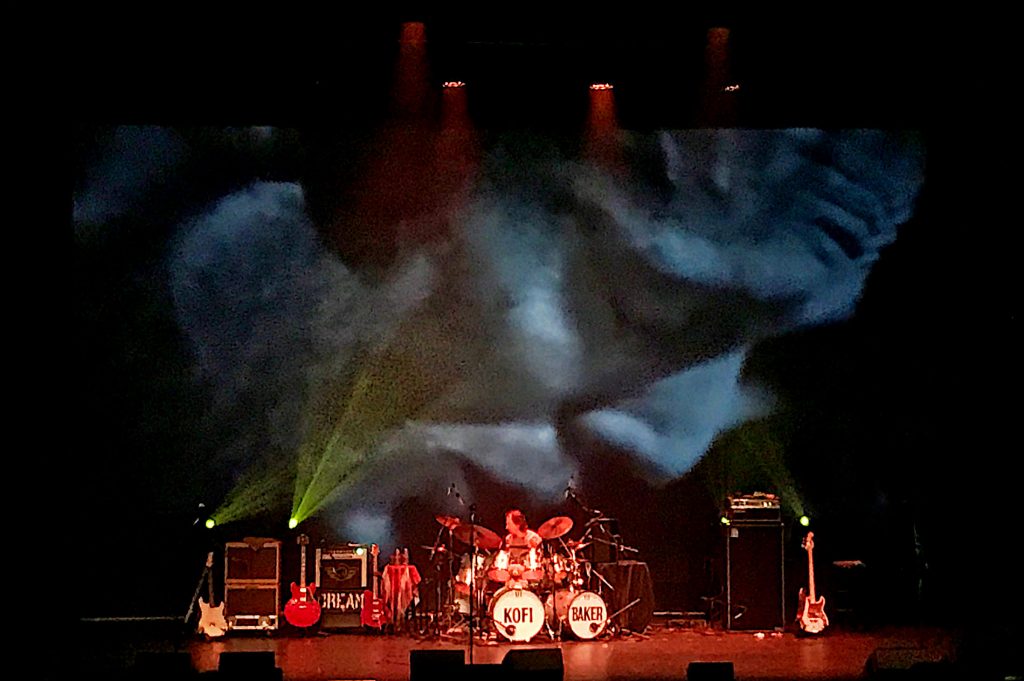 Drumming heaven as Ginger looks down on his son while replicating one of Ginger’s signature drum solo “Do What You Like.” A film of Ginger drumming to the same song was playing in the background and made you feel that the father was watching his son. 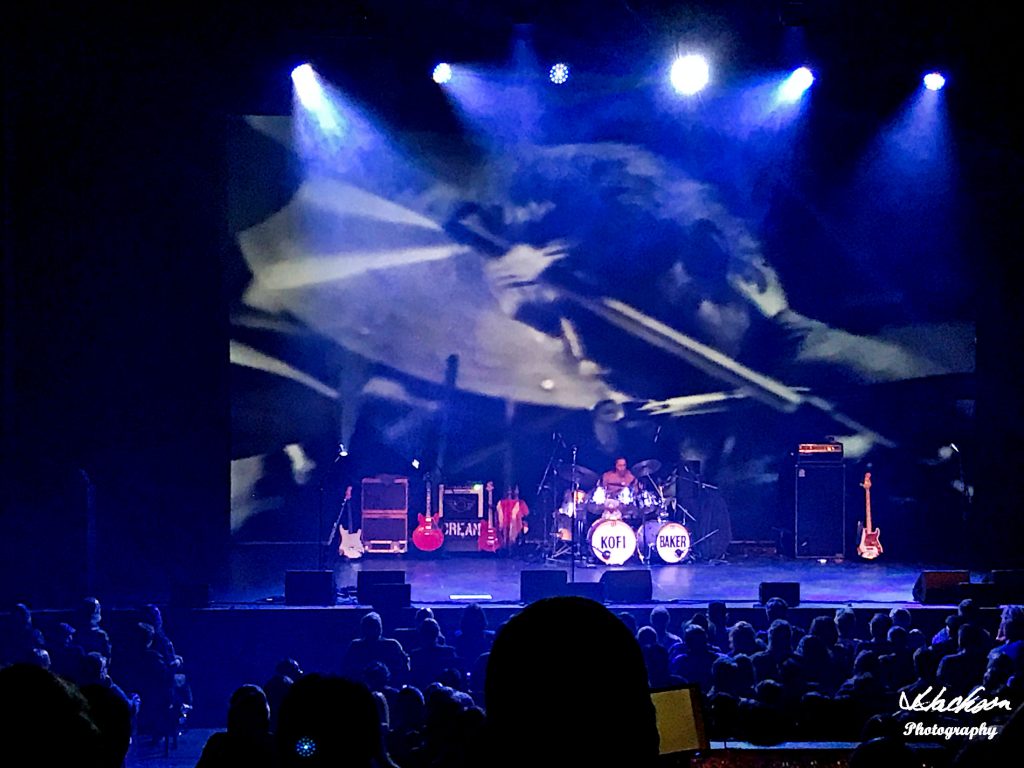 This concert featured the entire Cream album of Disraeli Gears, the band subliminal work that was released in November of 1967. It was a key album in the days of the hippie and the Summer of Love. 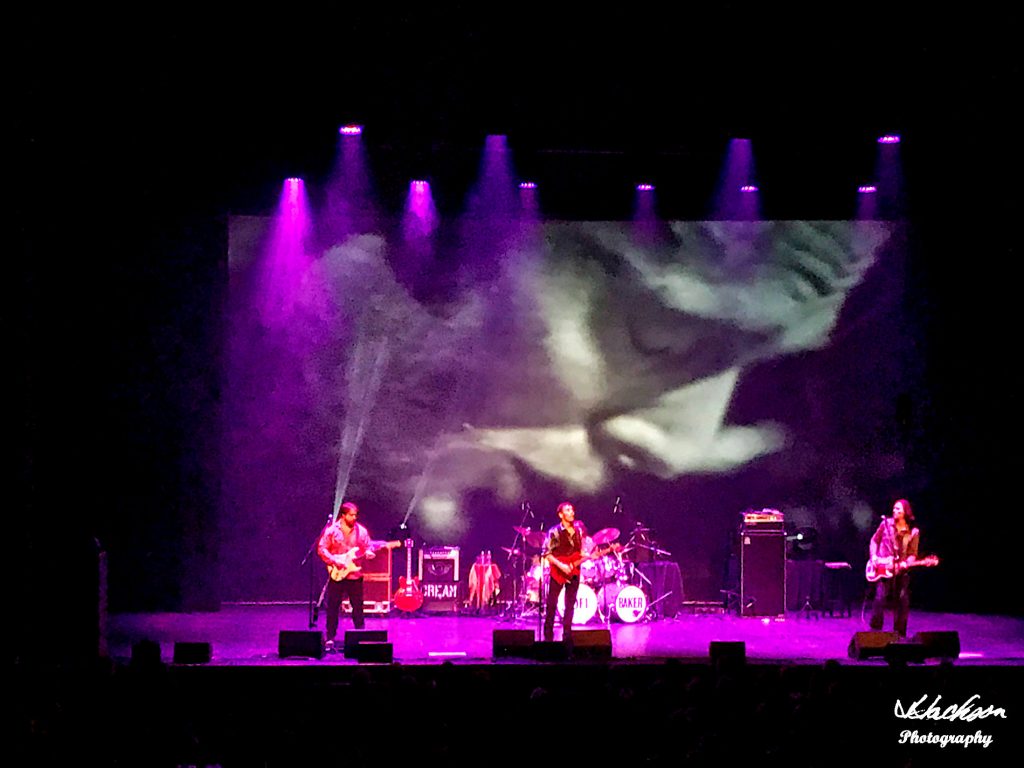 The band played the songs of Cream but also performed songs from Blind Faith, a band that Ginger Baker and Eric Clapton formed after the breakup of Cream. At one point guitarist Chris Shutters played the slide guitar using a flute for his slide! 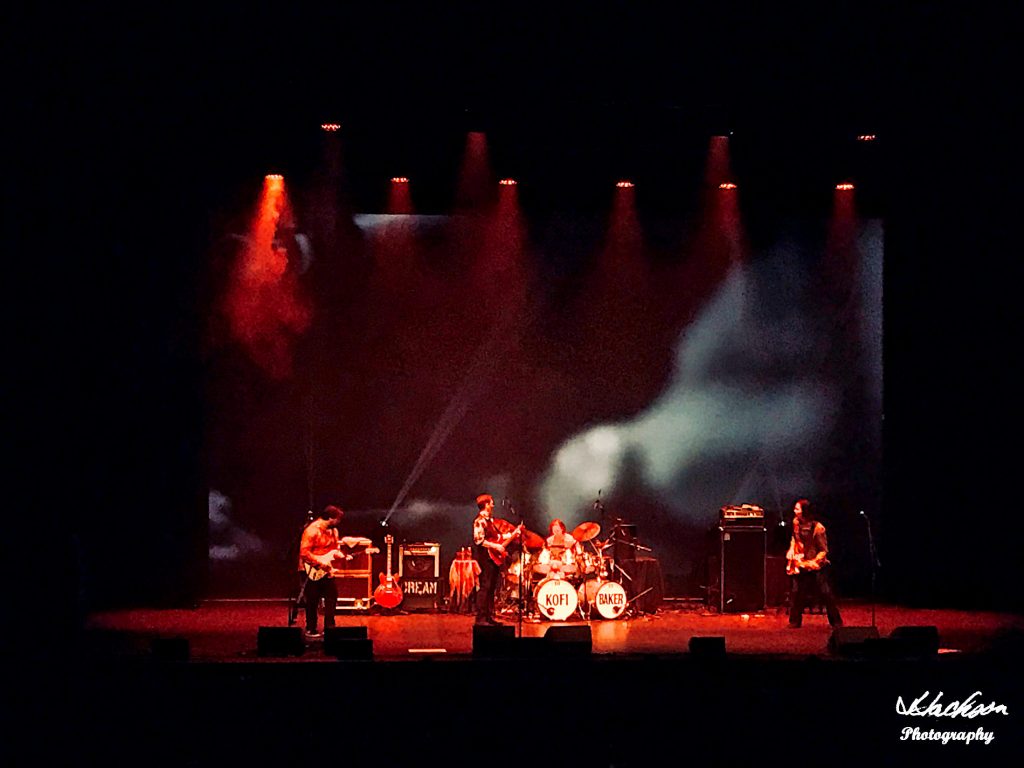 I must say that if I had a complaint, it would be the lighting and the sound control. Far too many lights going off in wild, uncontrolled directions and the house lights going on when not wanted and not going on when the band wanted them on. And more than once there was feedback and sounds that cut out. This was not the band’s fault but those that controlled the lights. 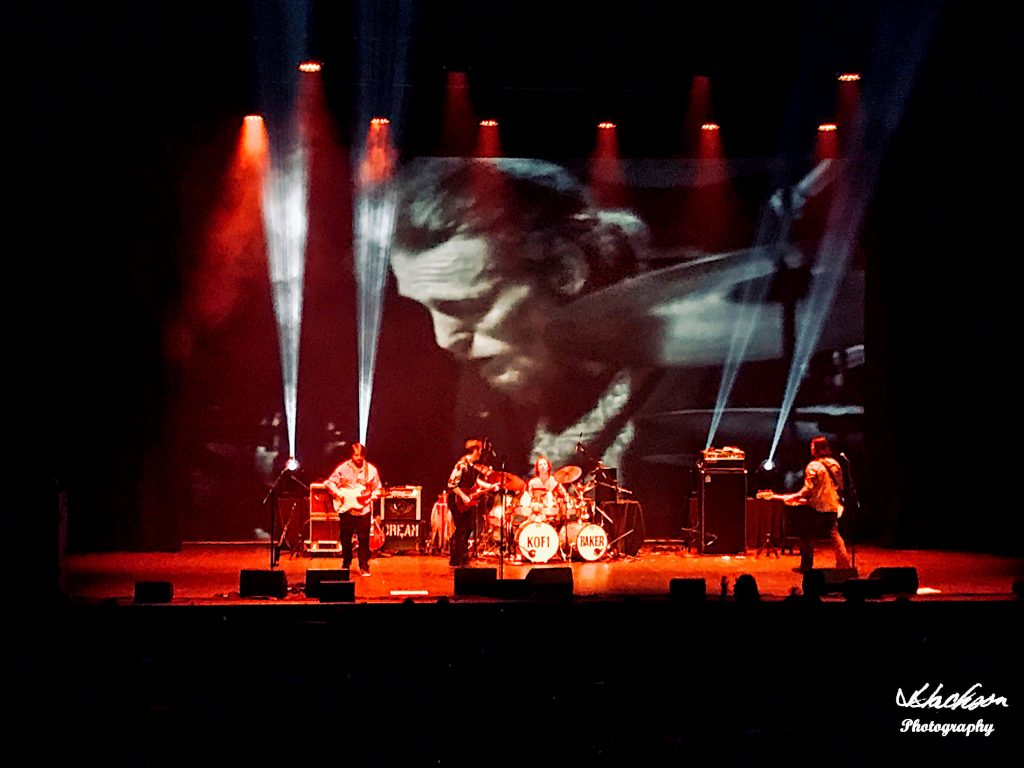 All in all it was a masterful performance that few typical cover bands can rightfully perform. I mean who can play bass better that Jack Bruce and guitar better than Eric Clapton, or drums better than Mr. Ginger Baker? 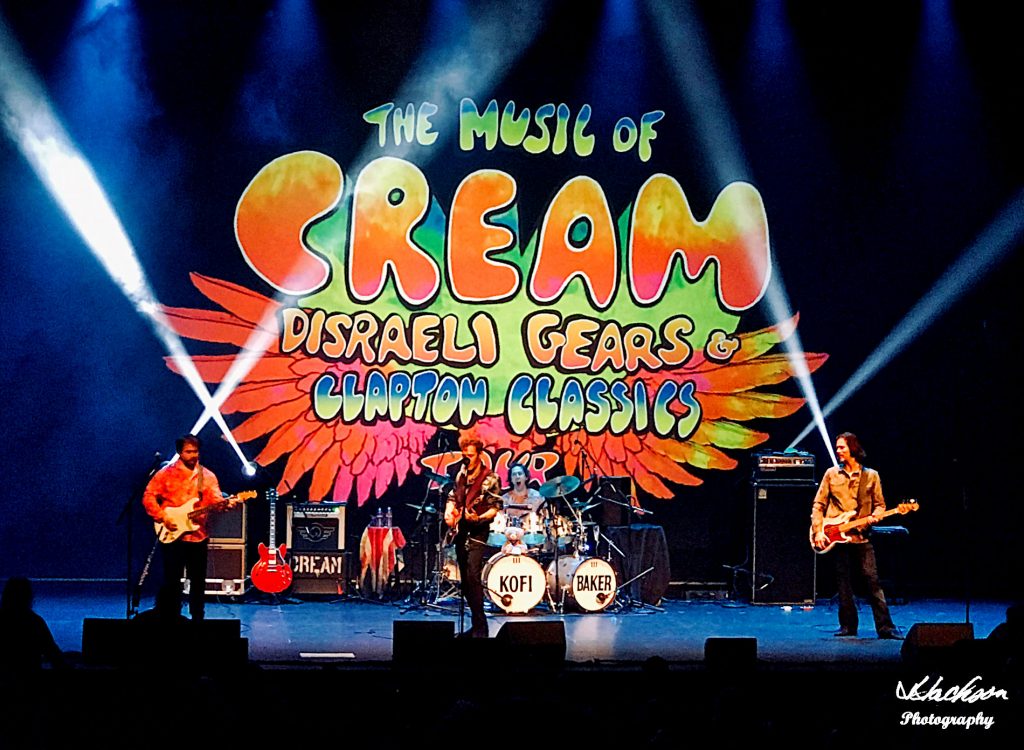 This was a wonderful concert tonight, with the exception that they played Wonderful Tonight which I really love but it has been overplayed. 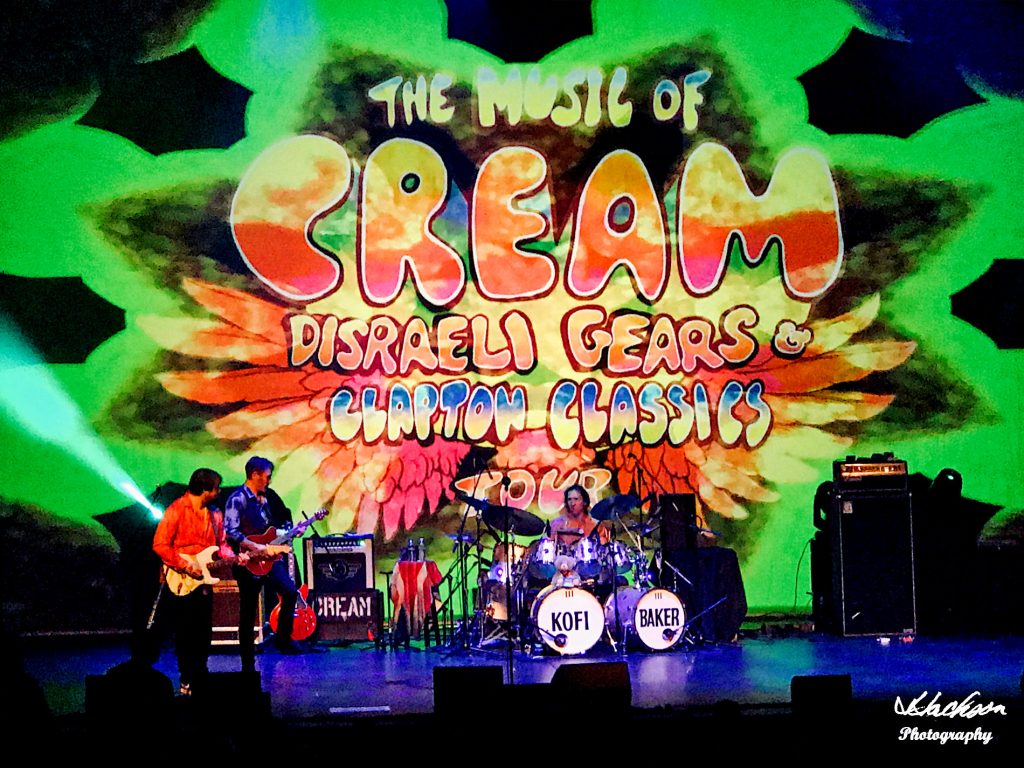 I do have to say that the music was great, the vocals and instruments were tight and the performance rating a venue much larger. The highlight of the show was not just Kofi Baker’s drum solo in unison with his father playing the same song in the background, but also the stories the band member told of their growing up around musical legends and the lives they led. 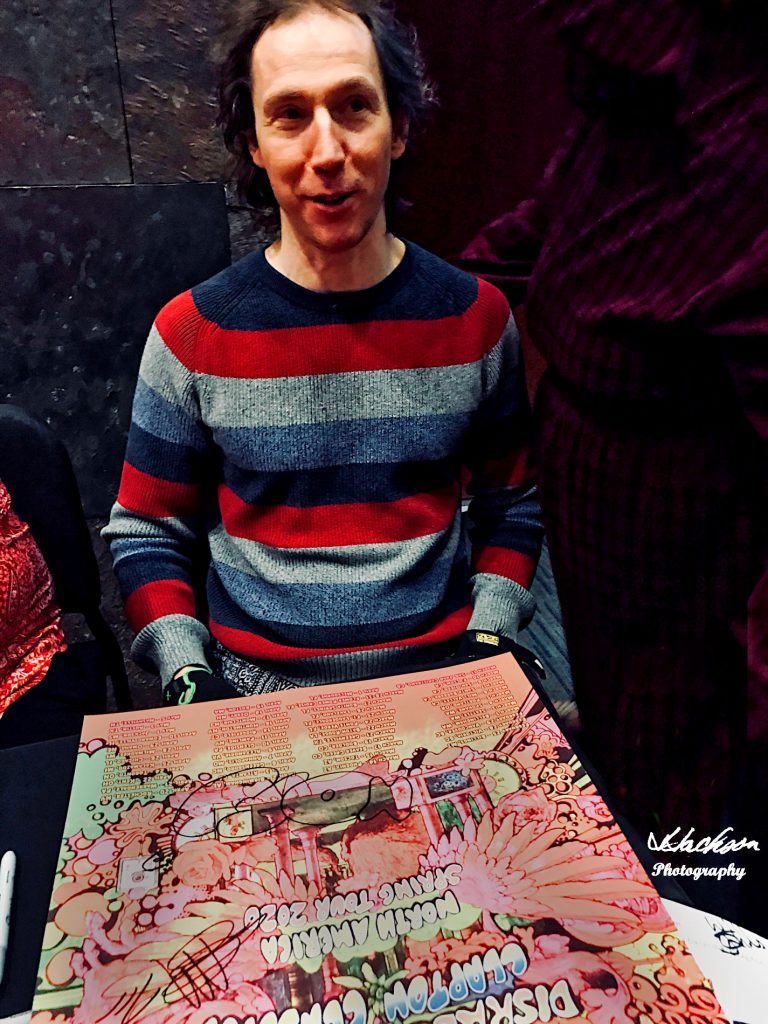 One of thre great things about small venues and bands that are fan-friendly is that they come out after the show to meet and greet their fans. Kofi Baker and the band signed our concert poster and our program. 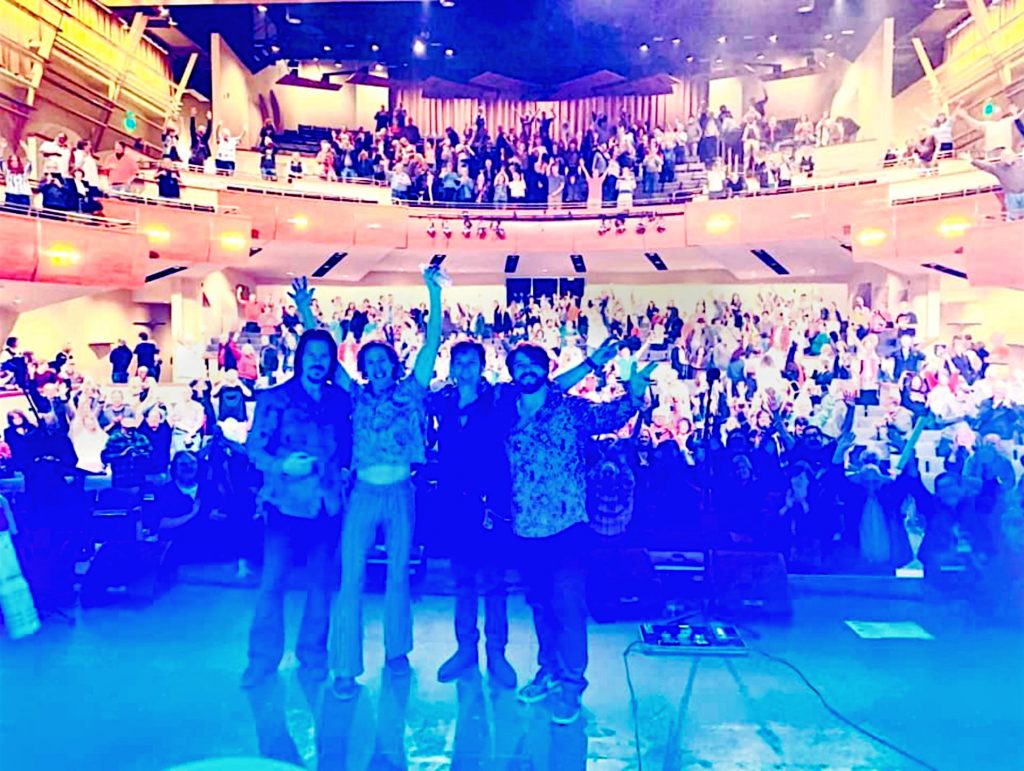 Above, just after this photo was taken at the end of the concert in Folsom, the band announced that they were postponing the remainder of the tour due to the Coronavirus outbreak.

As an amateur drummer, I found it incredibly exciting to see Ginger Baker when his band Blind Faith made a tour stop in Oakland, California in the early 1970s. To see him play that long drum solo was amazing. But then to see his son play that exact same song with the master looking on from above, was simply magical and another drop in the bucket!