A Journey to the Center of the Earth: The Moaning Caverns

Way back when I was a young boy, I watched the fantastical movie Journey to the Center of the Earth. As a wannabe geologist and paleontologist, I was fascinated with the concept of finding a cave and then going down into its depth where a whole different world existed. 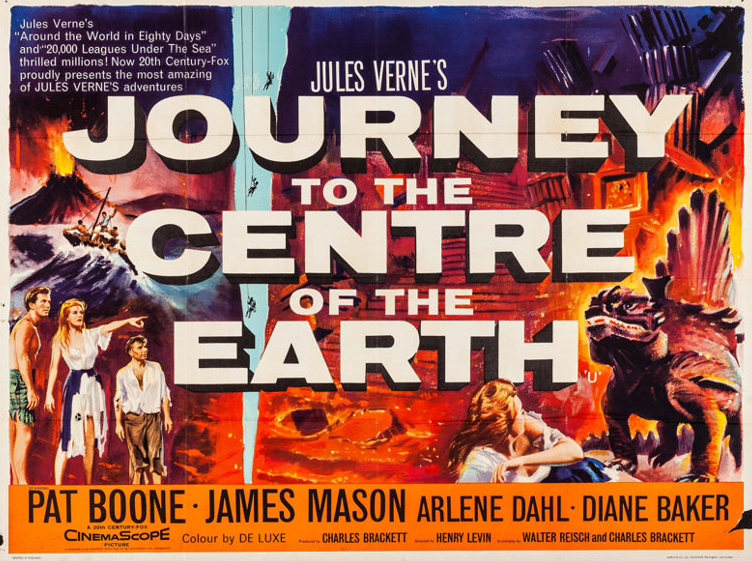 Of course, the movie was a rather loose interpretation of the novel that was written by Jules Verne who was a great fiction writer of his time but had really no concept of what was lying a mile underground. But both the movie and the film captured the imagination of many, especially me. And although there are several caverns in the world, I only recently was afforded the opportunity to visit one not that far from my home near Sacramento, California. 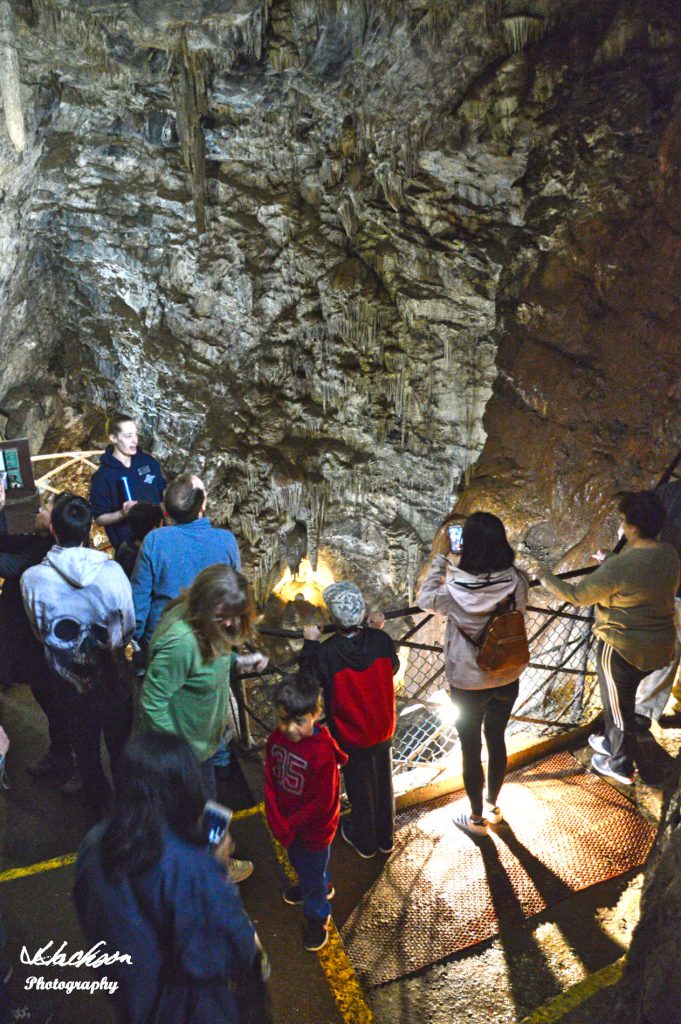 The Moaning Caverns are located about 2 hours from Sacramento in Calaveras County, near Vallecito, California. The location of this mighty cave is in the heart of the state’s Gold Country and in fact, its modern day discovery was made by gold miners in 1851. However, there is evidence that the cavern has been known to prehistoric man well before the white man came to California. 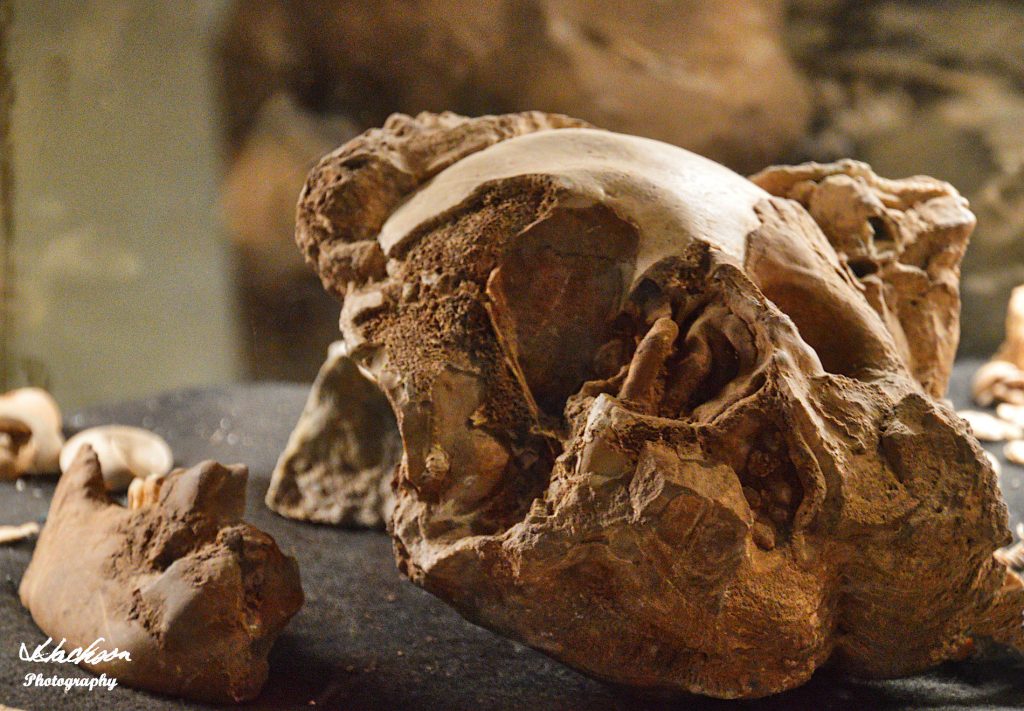 Above, a prehistoric human skull that was found in the deep recesses of the Moaning Caverns. Along with many human bones, the bones of prehistoric animals have also been found there. Perhaps they were lured there by the strange moaning sound from air that echoed out of the cave. Or perhaps they entered the cave to seek shelter and became lost and disoriented as the depths are pitch black. 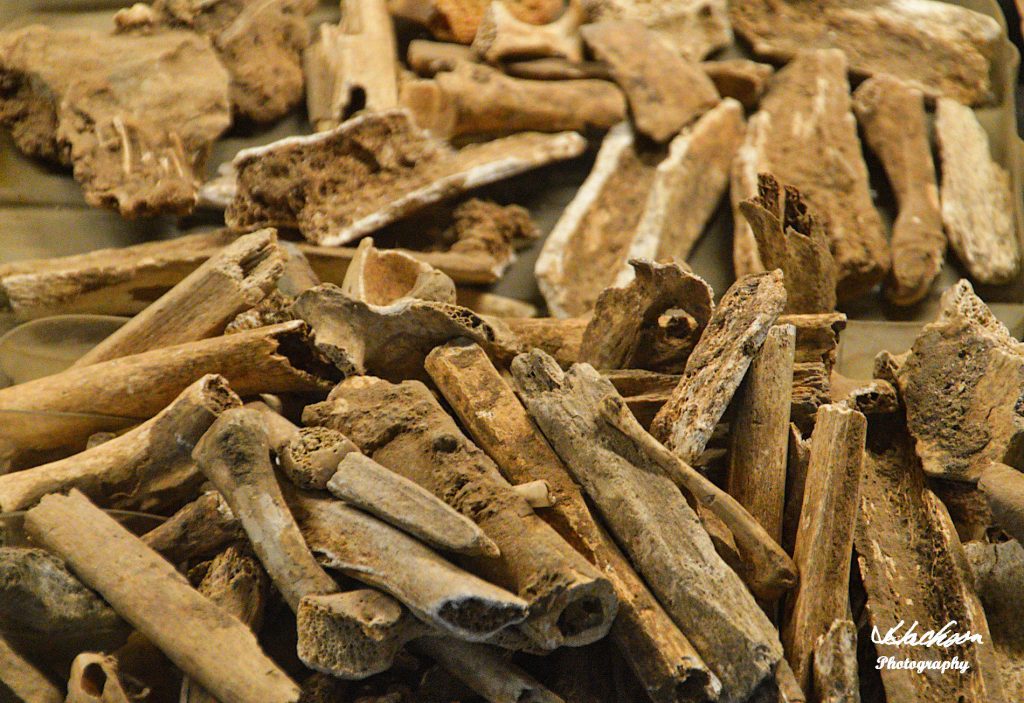 In the early 1990s the caverns were developed for tourism. The portion that is easily accessible for tourists consists of a 165 foot vertical shaft that leads to the bottom via stairs and a unique 100-foot-high spiral staircase. The actual shaft, steps, stairs and spiral staircase are not too difficult to manage but care should be taken to wear appropriate shoes. 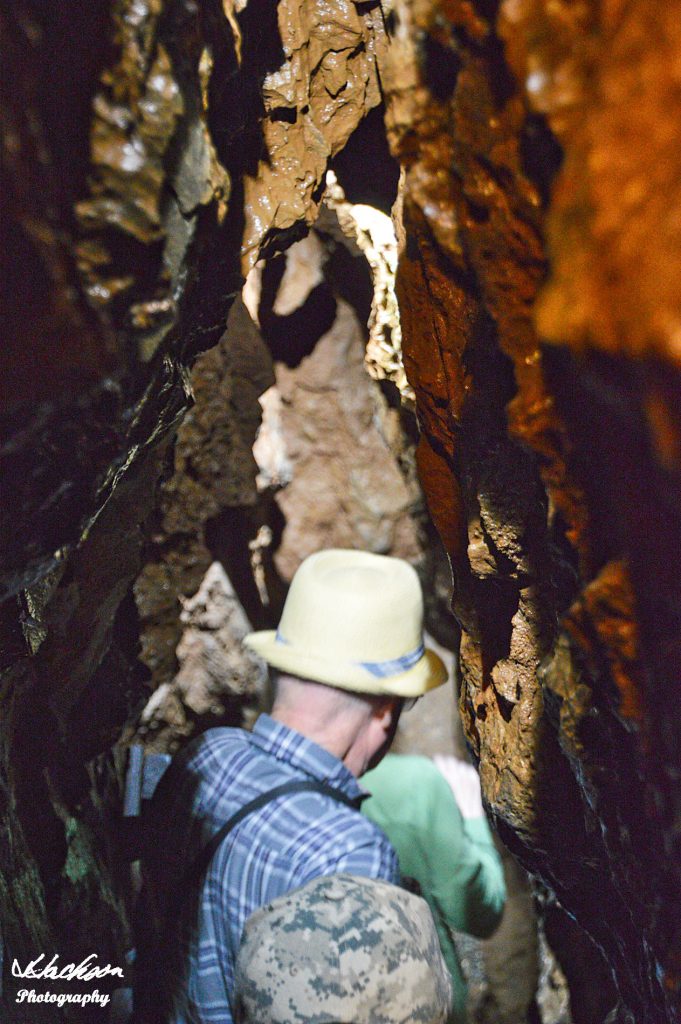 The Moaning Caverns are open for tours, which you sign up for at the visitor center. You can also do some spelunking in the cave system that reaches a depth of 410 feet (124 m). The hours vary by season so check their website as you plan your trip: 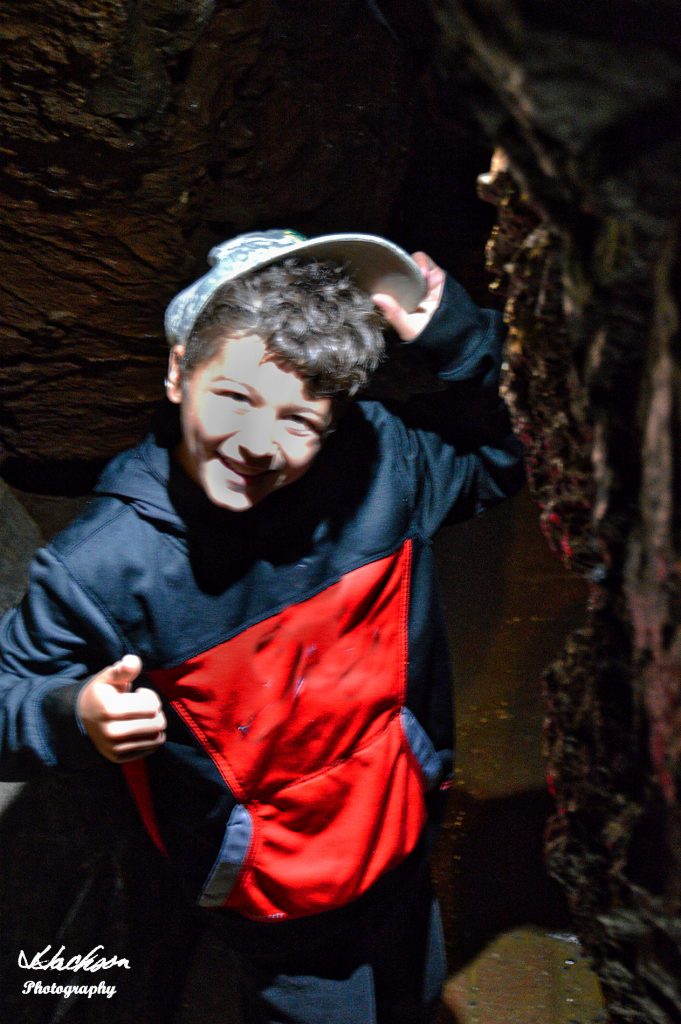 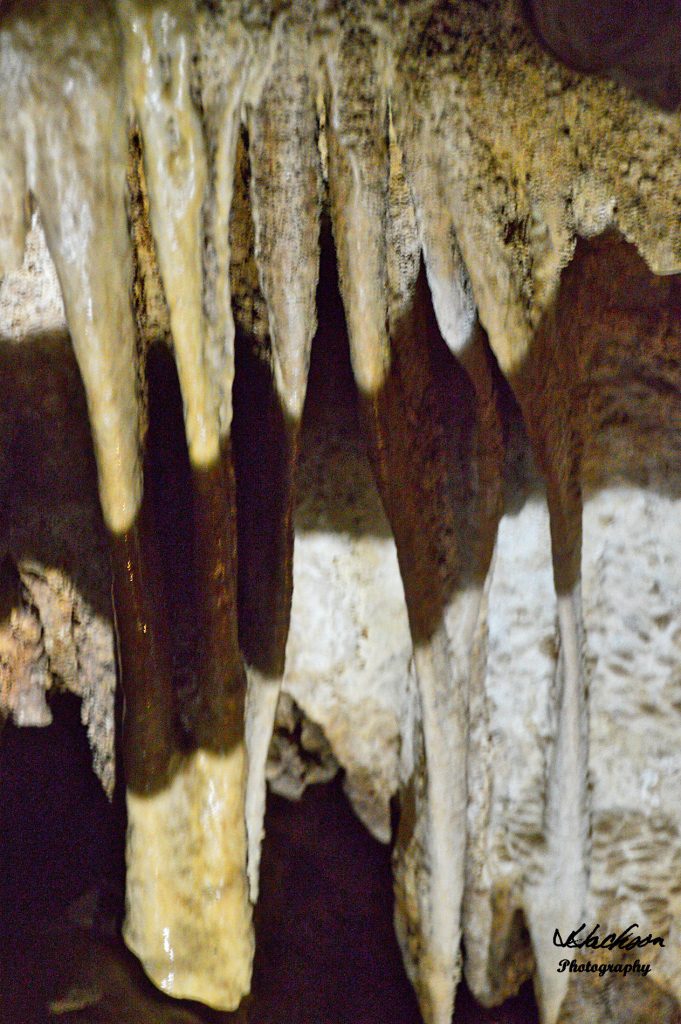 Ticket sales will close five minutes prior to the start time of a tour. Last minute additions are at the discretion of the ticket sales counter. Once a tour has begun, no more tickets will be sold for that tour time. 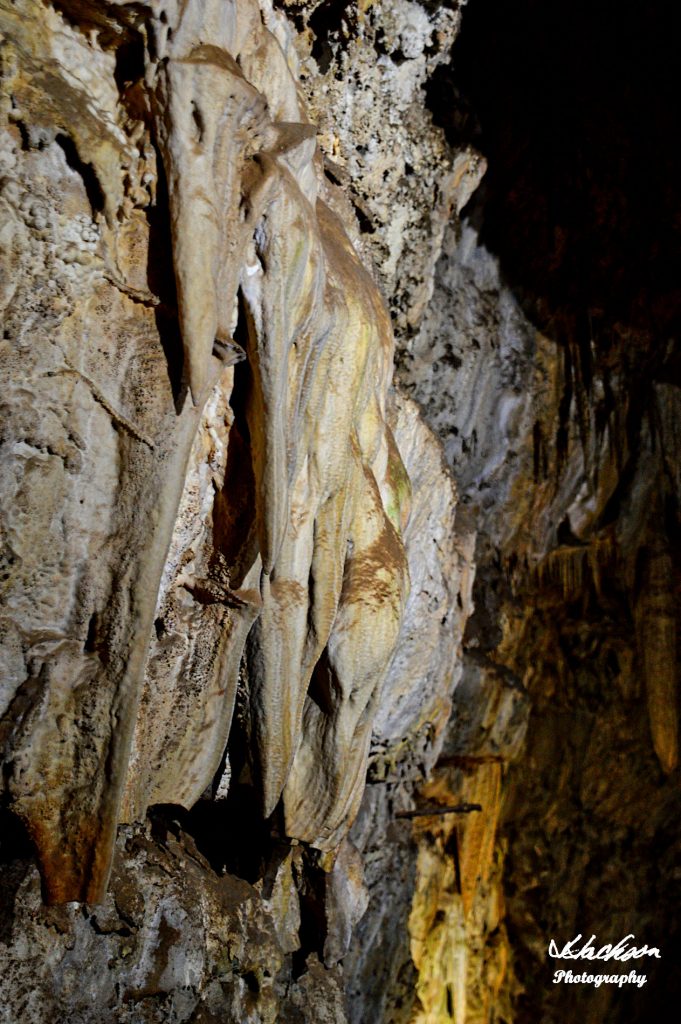 Remember that this place is a significant archaeological site and some of the oldest human remains known in America have been found here. The oldest of these human bones are about 12,000 years old and were discovered under about 16 inches (420 mm) of speleothem (*) mineral deposits. The Moaning Caverns seems to have been the final resting place for many prehistoric humans as well as up to more recent periods as many human bones have been found inside the cave system. Whether they fell in through the cave opening, or were lost in the system while exploring, or by some other method such as a sacrifice, is not known.

(*) A speleothem is a formation inside a cave from a secondary mineral deposit like limestone. 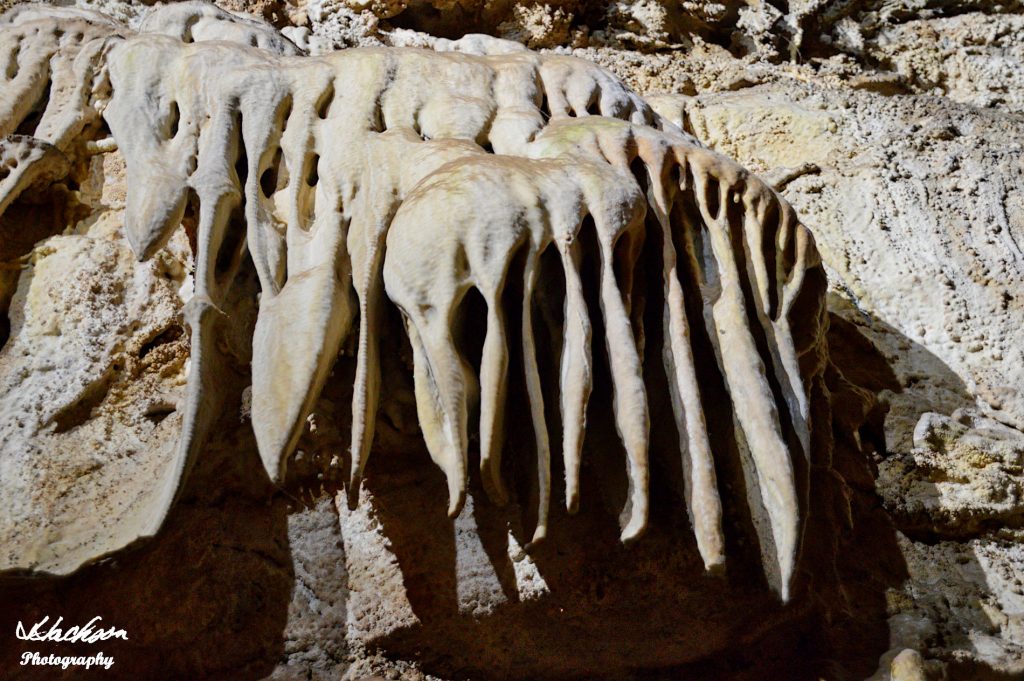 The massive 180-foot chamber inside the Moaning Caverns is the largest single cave chamber in California. Numerous smaller passageways channel away from the main grotto which has a ceiling that is about 30 feet thick in some places. The grotto chamber is actually tall enough that the Statue of Liberty, without its base, could sit inside of it. 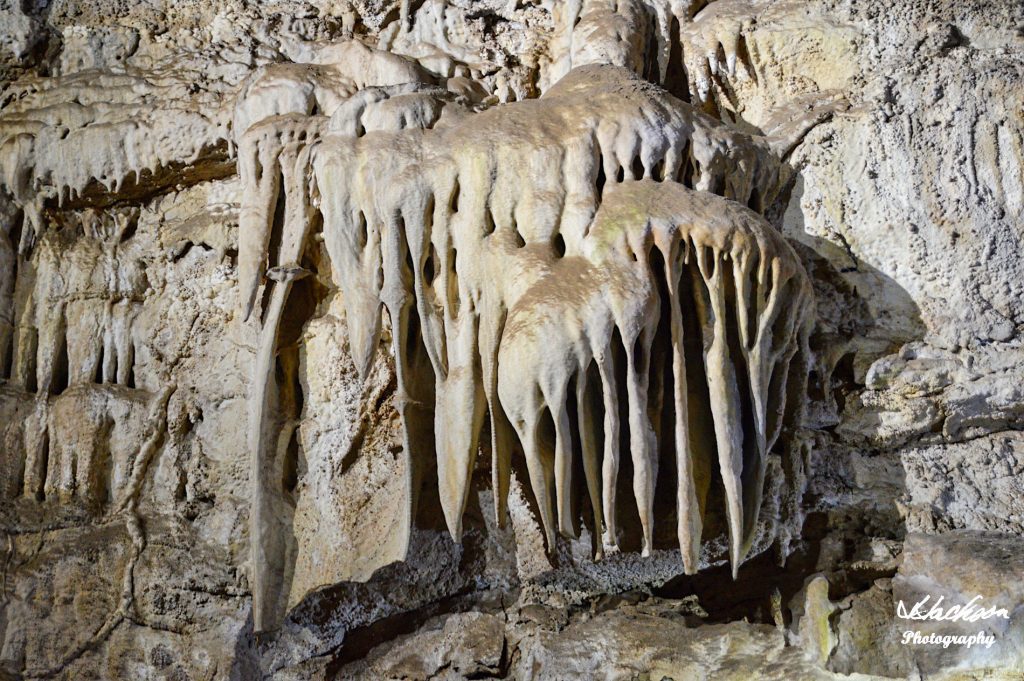 From the time you enter the cave, which only has one known natural entrance, you will see incredible limestone stalactite icicles and stalagmite pillars, including a 25-foot tall flow formation known as the Igloo. 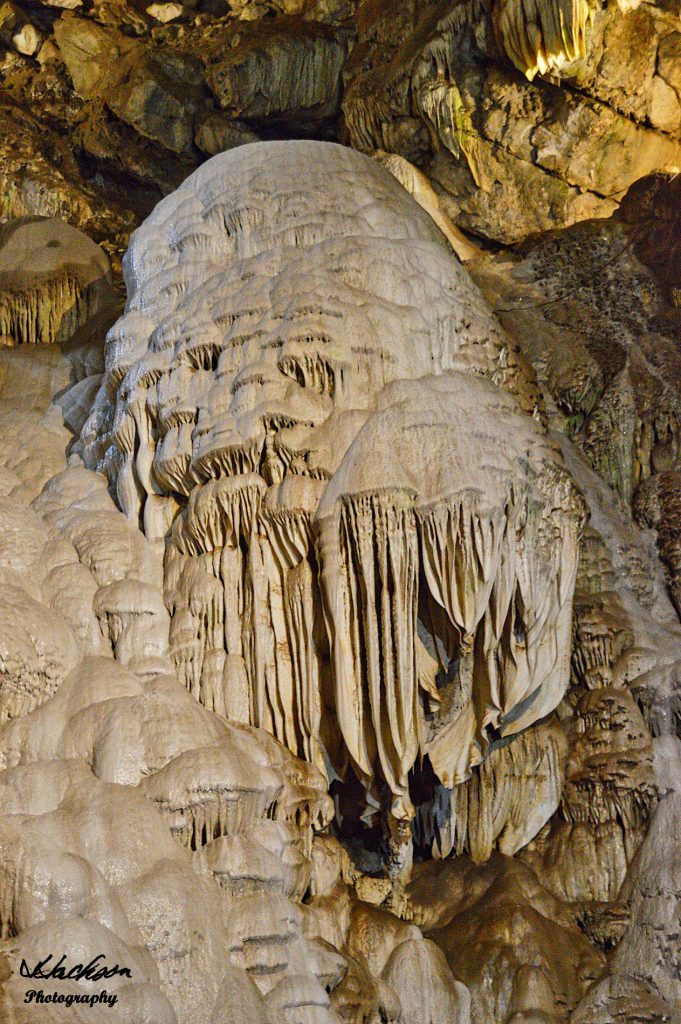 The early settlers to this region were eager to explore the cavern in their quest for gold. This was made difficult because there is only once entrance at the surface which drops vertically about 30 feet straight down into the center of the main chamber. When the search of the cave for gold didn’t pan out, it was decided that a commercial venture might prove to be lucrative. But the small cave opening would not suffice so dynamite was used in the mid-1800s to make the opening larger. The opening was expanded so that a set of stairs was built which ended at a large platform sone 65 feet below. From the platform, there is the famous spiral staircase that descends some ten stories to another platform as the base of the cave. Unfortunately, when the larger cave opening was created, it reduced the moaning sounds that the cave emitted. 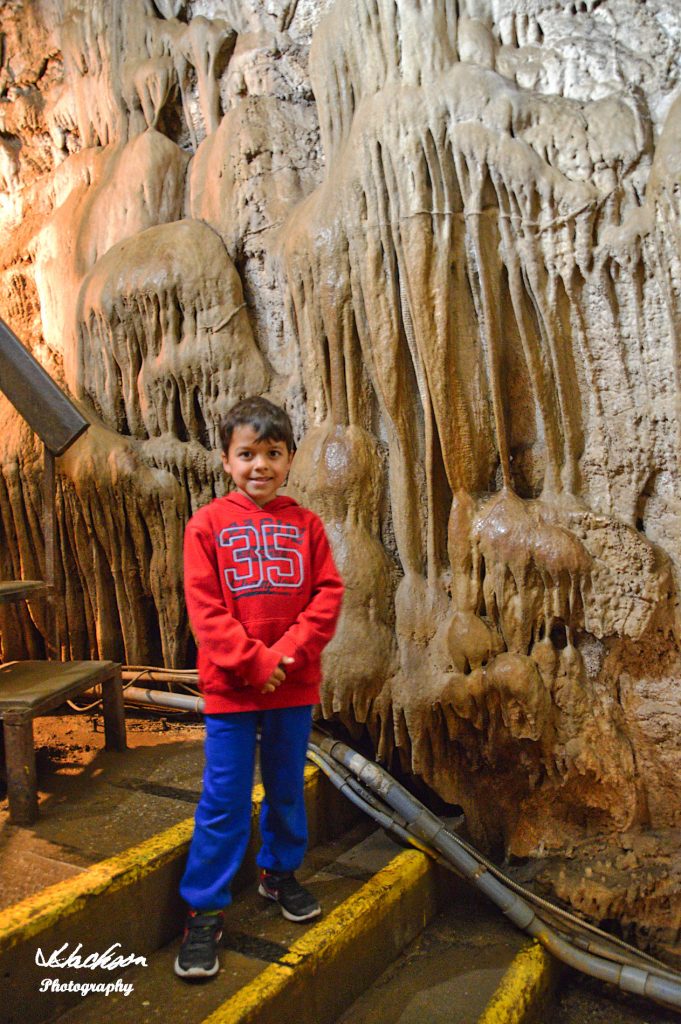 Young and old amateur spelunkers will enjoy the ambiance and the sights within the cave. The interior temperature remains pretty much constant all year round and is actually pleasant. 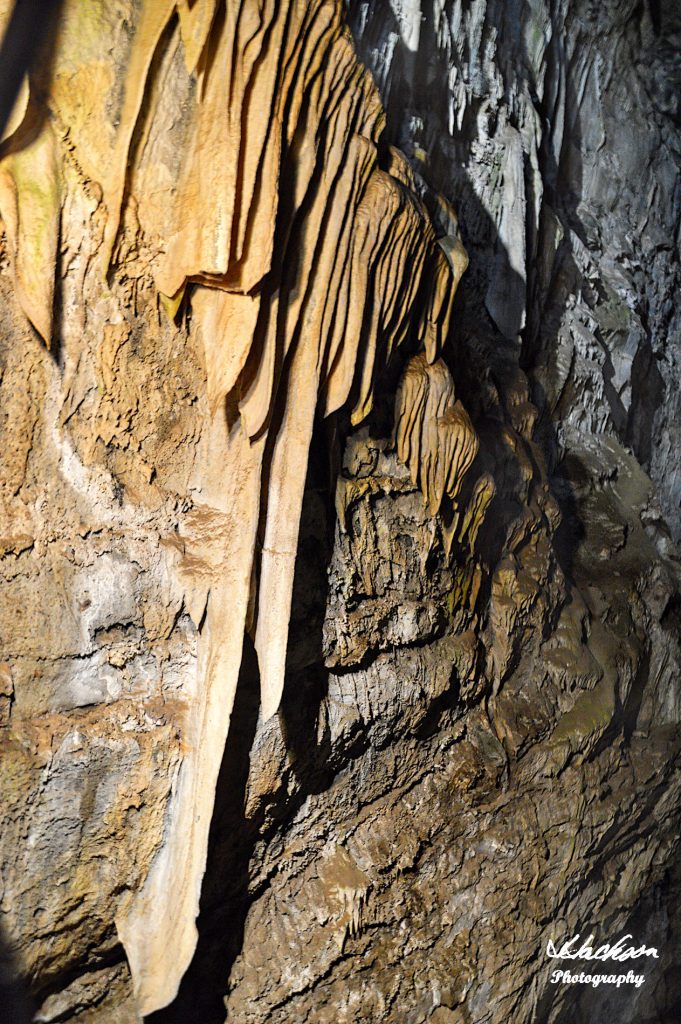 The Moaning Caverns also offers an Expedition Tour which allows cavers to spend about two hours exploring undeveloped passages deep inside the cavern. There are no lights, stairs, or walkways but hard hats with lights are provided. Visitors who take this optional tour get to explore a maze of tight passages by crawling on their stomachs and climbing through constricted, snug-fitting chambers. Guides are provided. Contact the Moaning Caverns for more information. 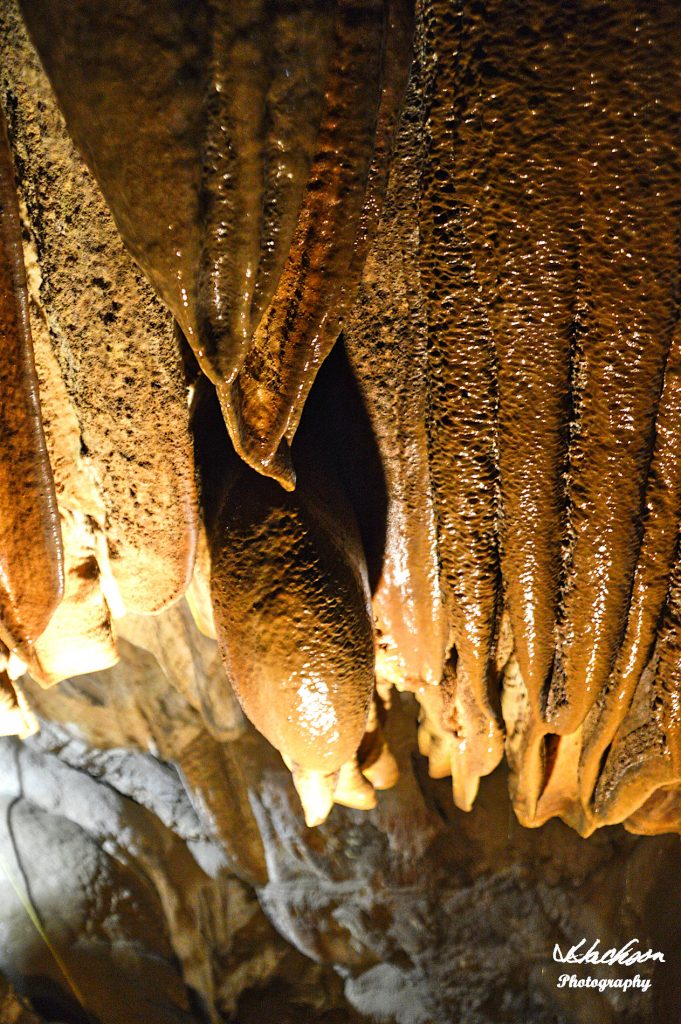 What will you see? You will see a vast assortment of unique, one-of-a-kind limestone formations that are still growing and changing as the calcified water continues to its ceaseless dripping. 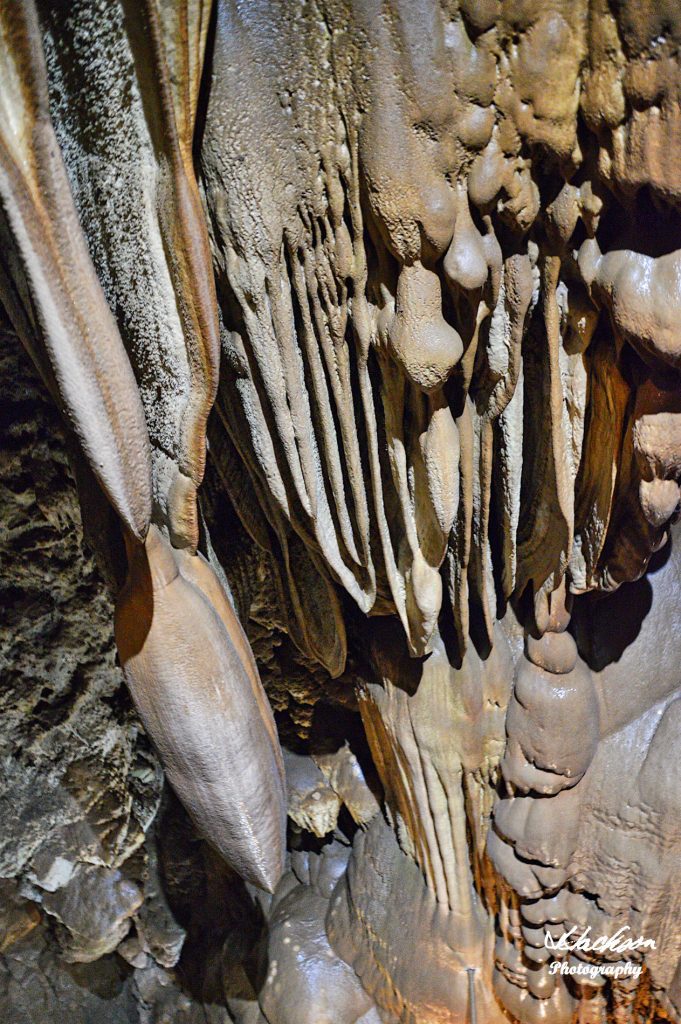 Remember that as you explore these magnificent cave system not to touch these exceptional structures. They have been growing for eons and skin oils may change them. There are places where you are allowed to touch the stalactites and stalagmites, but only where the guide tells you. 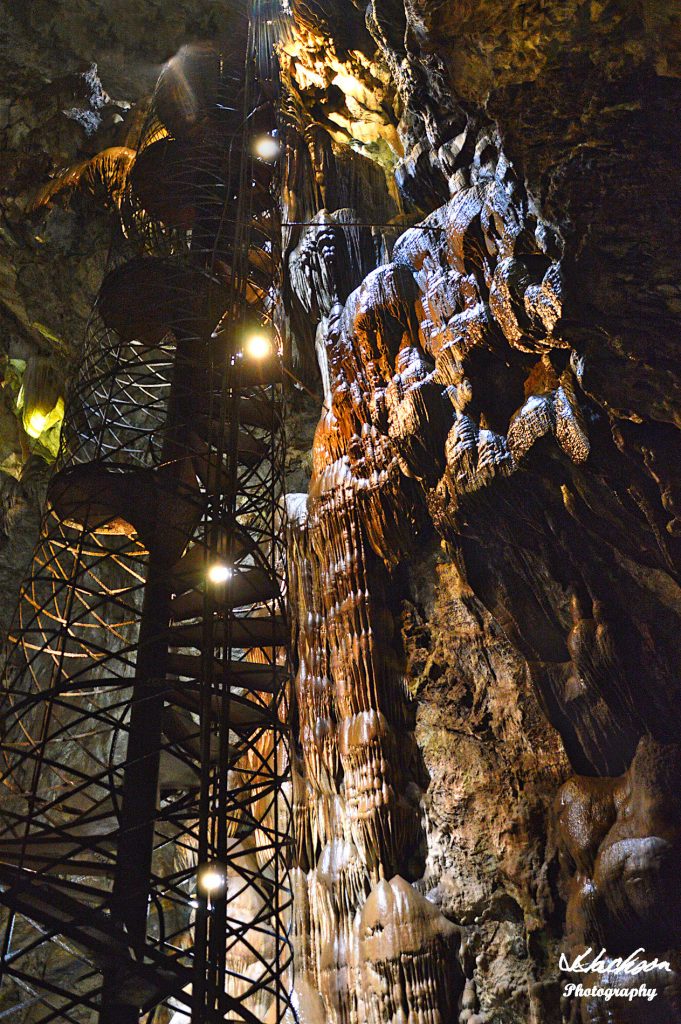 At the bottom of the ten-story spiral staircase is the base of the amazing Moaning Caverns. You are surrounded by unsurpassed beauty and natural wonders. Take your time, enjoy the experience and always remember that the going back up is more difficult than the climb down. 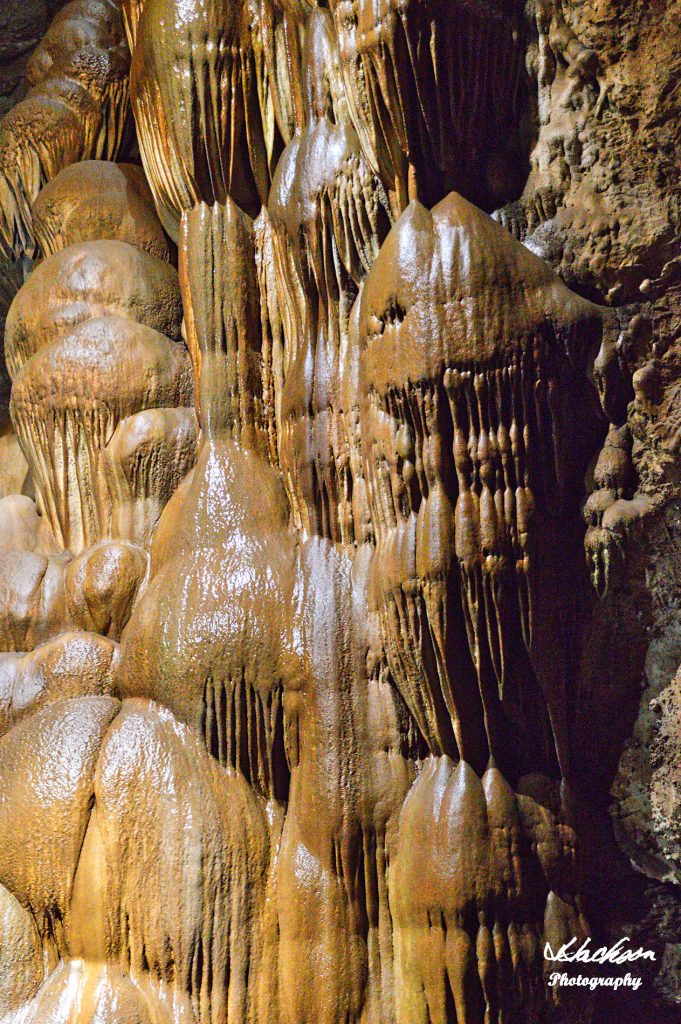 It has taken thousands of years to create these magnificent formations. 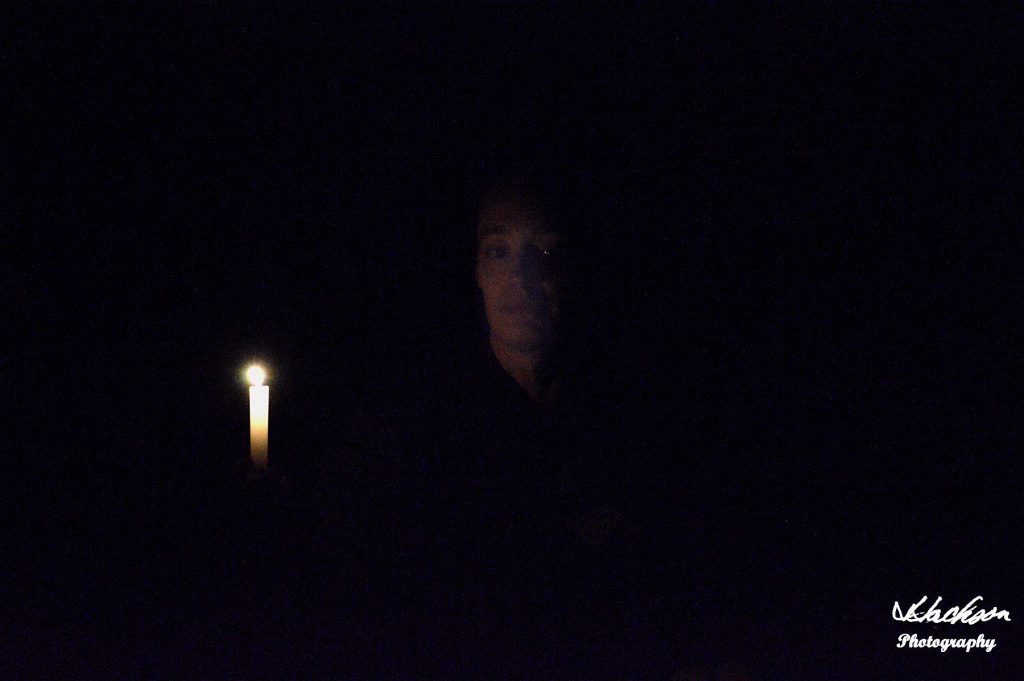 One of the highlights of your journey to the depths of the earth is when you reach the bottom of the cavern and have had some time to get acclimated to your surroundings. The massive chamber glows under many artificial lights, until your guide tells you to remain still and then turns out the lights! You get a sense of how deep you are and what the early explorers faced while only having candles. 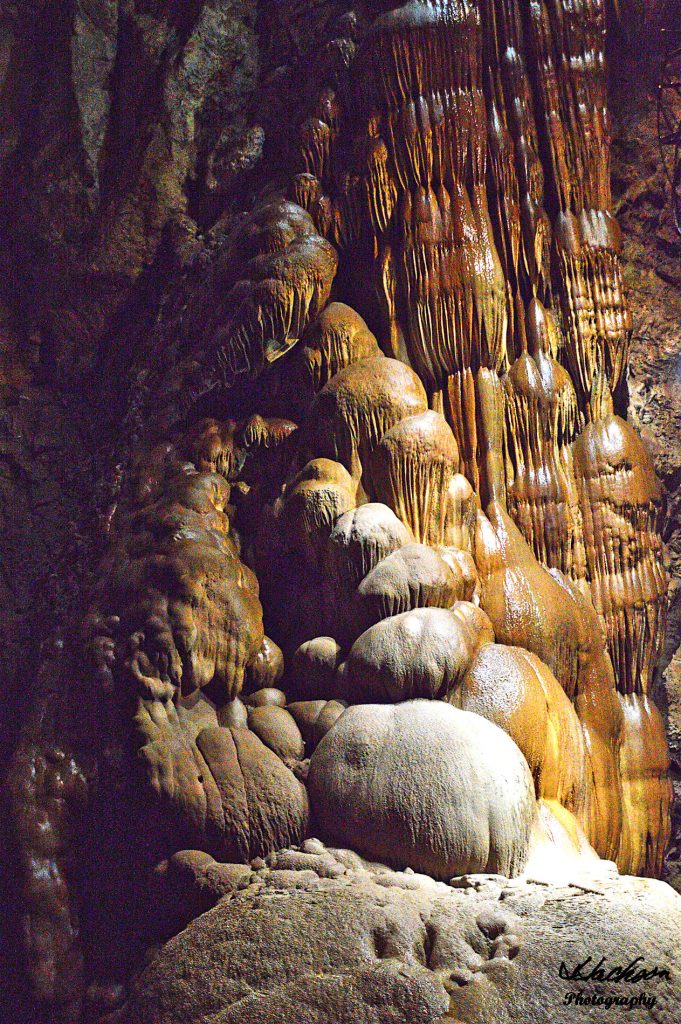 When the lights come back on, the surroundings seem even more magical! 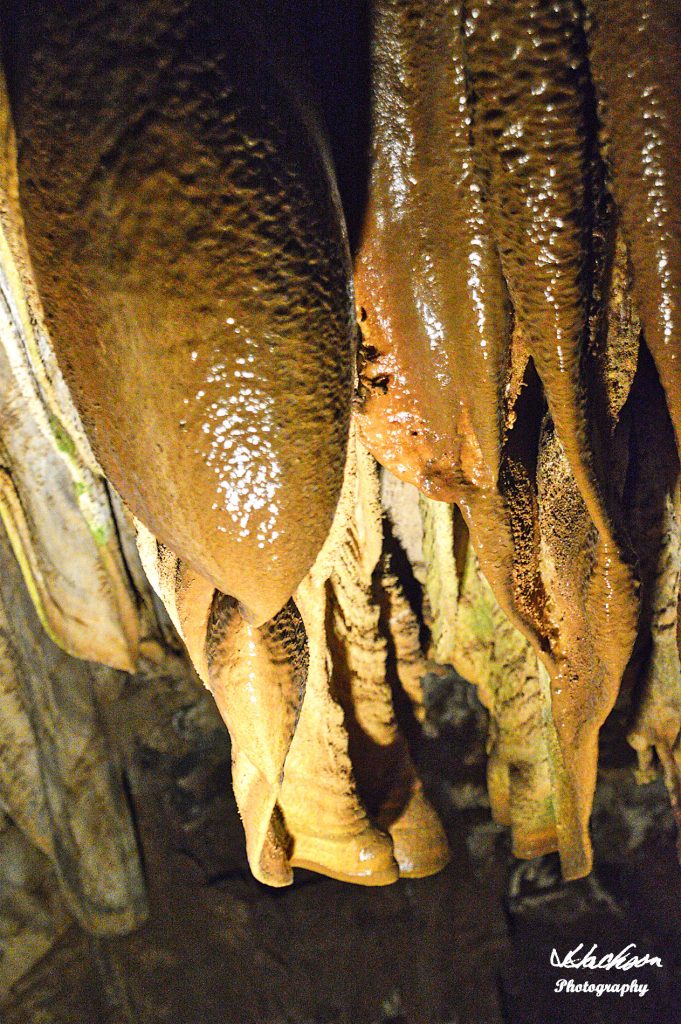 Using your imagination, you can see all sorts of strange formations like the one above that looks like gigantic strips of bacon. 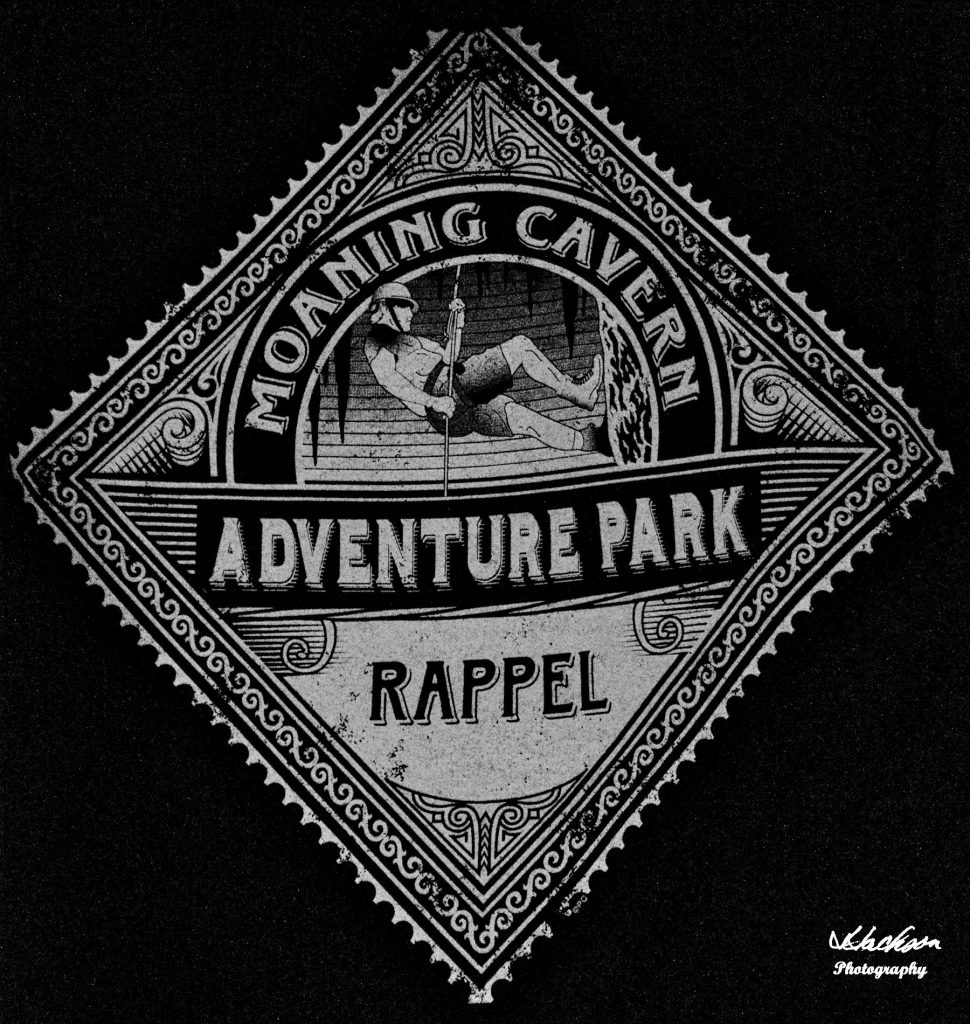 Back at the topside you can explore the gift shop, enjoy a picnic on the grounds, climb and rappel a rock wall, or purchase souvenirs and some colorful tumbled gems and minerals. 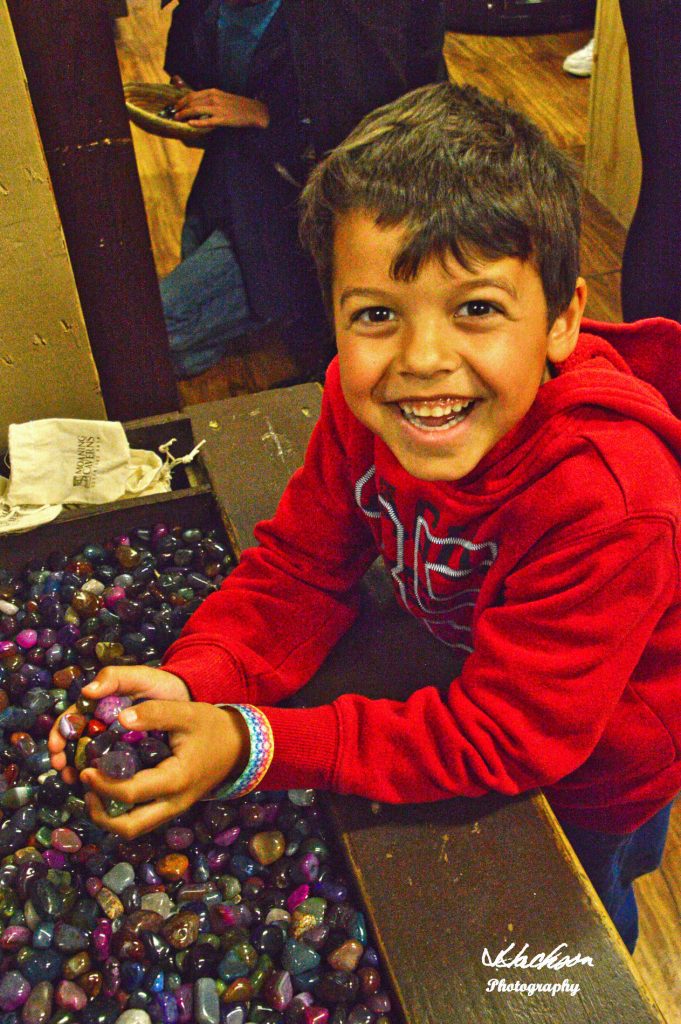 Can you tell that this was a great memory for this young man? It sure was for an older one who had this on his bucket list since he was that age!

The price of admission to the Moaning Caverns also includes a climb on their outdoor rock wall! 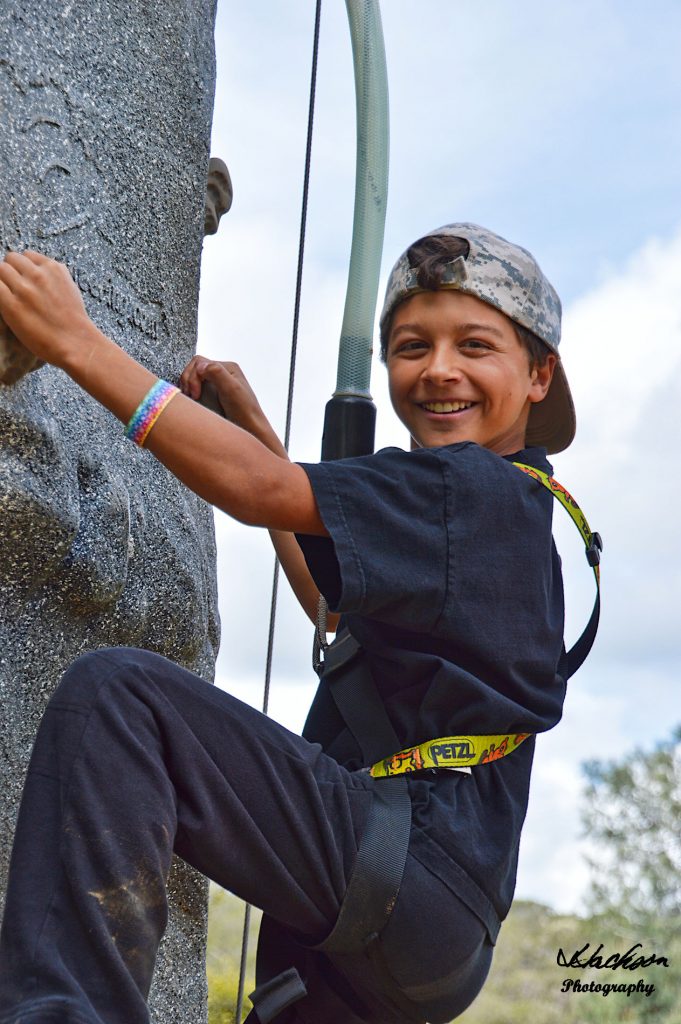 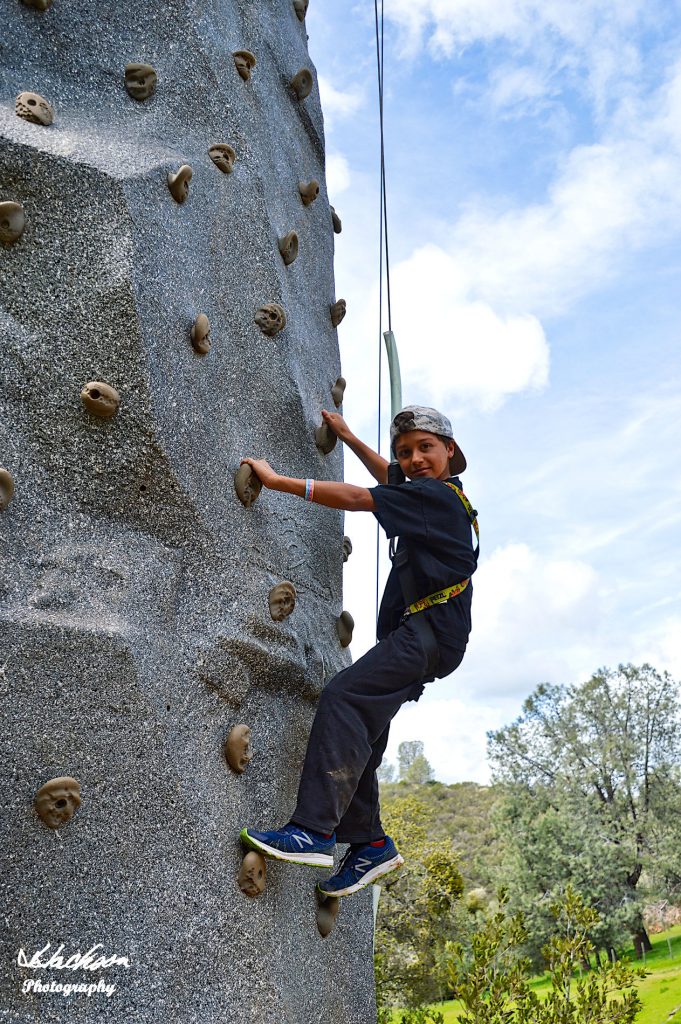 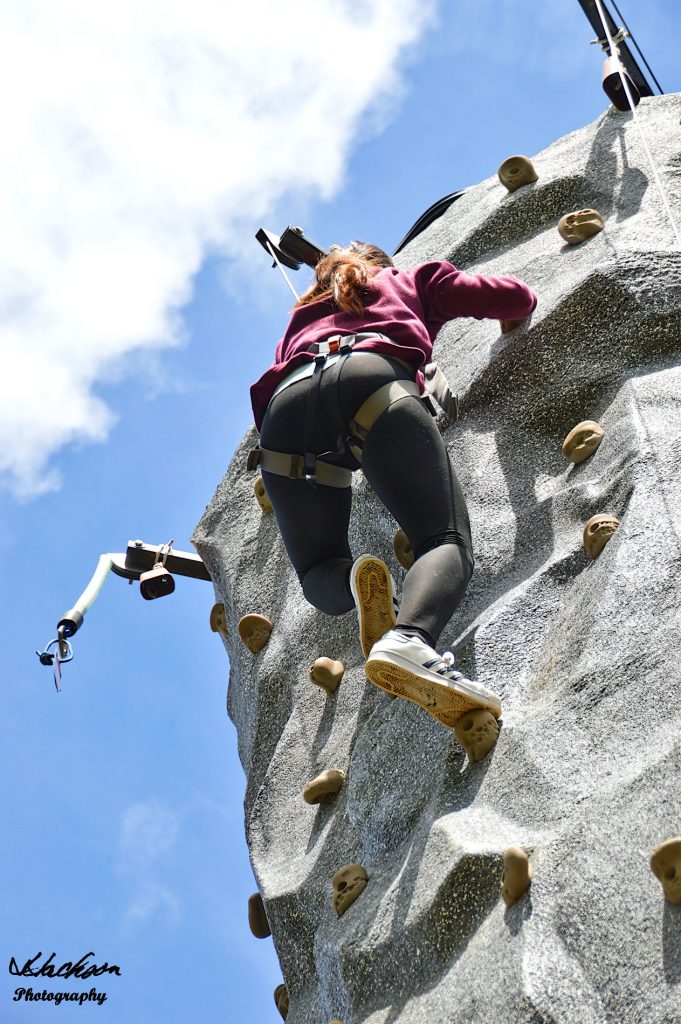 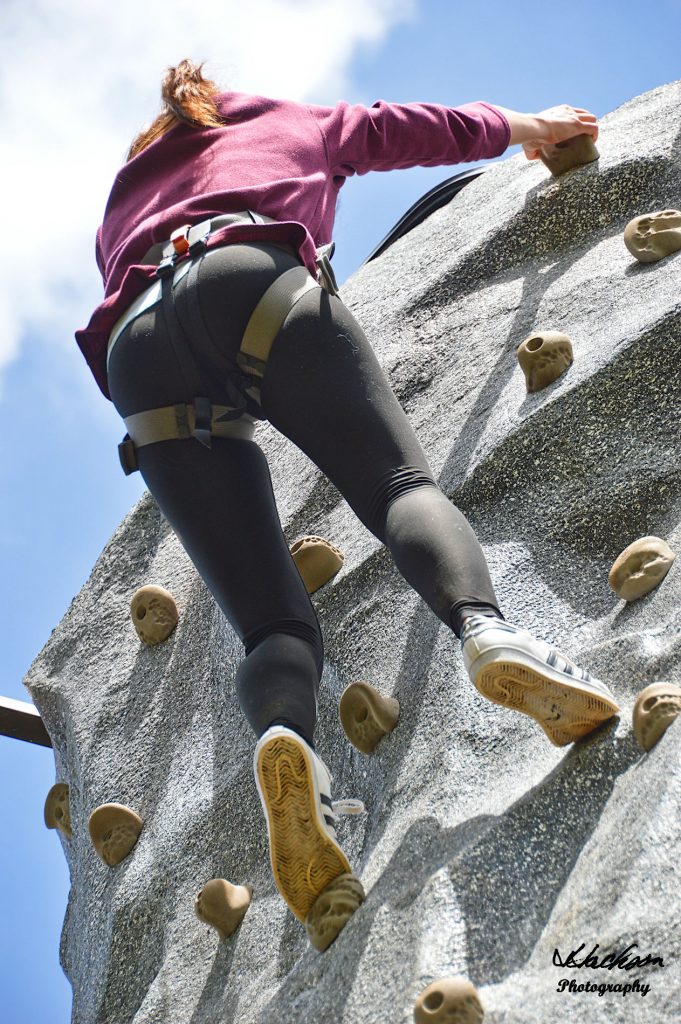 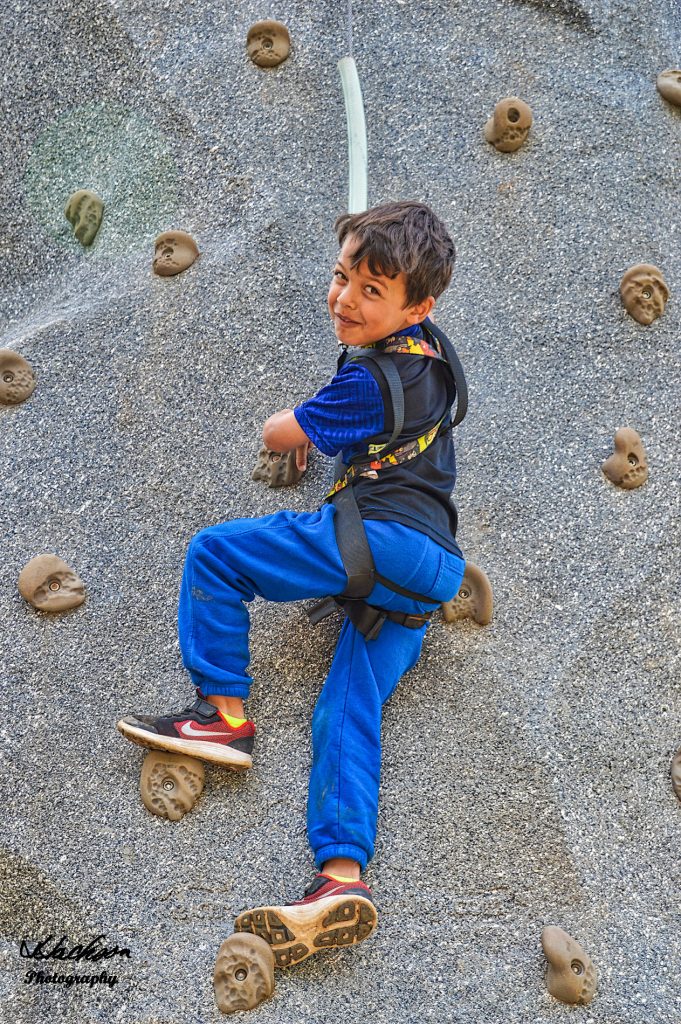 No matter your age, a visit to California’s amazing Moaning Caverns is an experience of a lifetime. A visit to middle-earth will add another drop in the bucket!