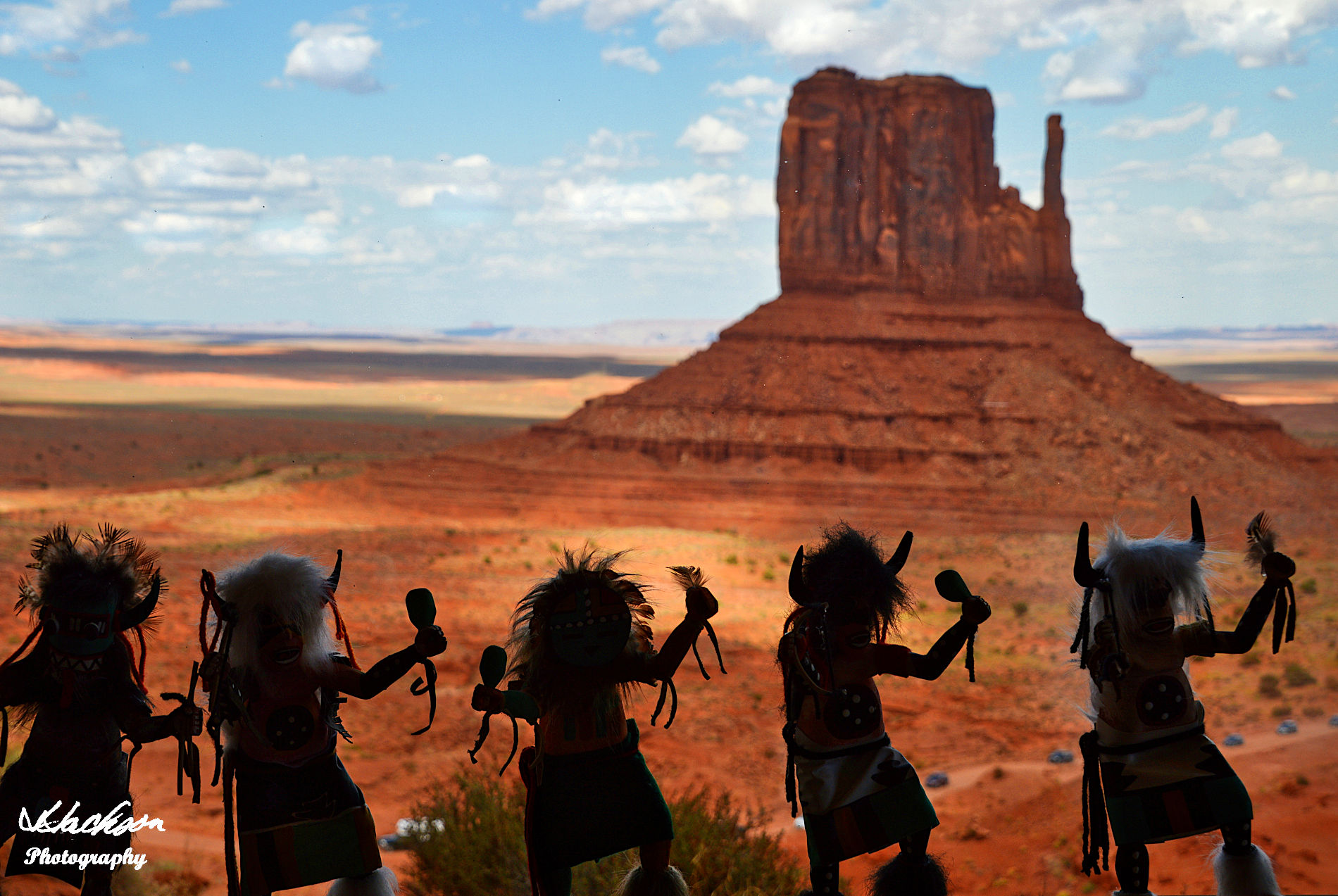 It is said by the people who live in this “valley within a rock” that this is where the earth meets the sky.  And those that live here understand that this magical place has sustained their people through simple living and an appreciation of what the land has given them. 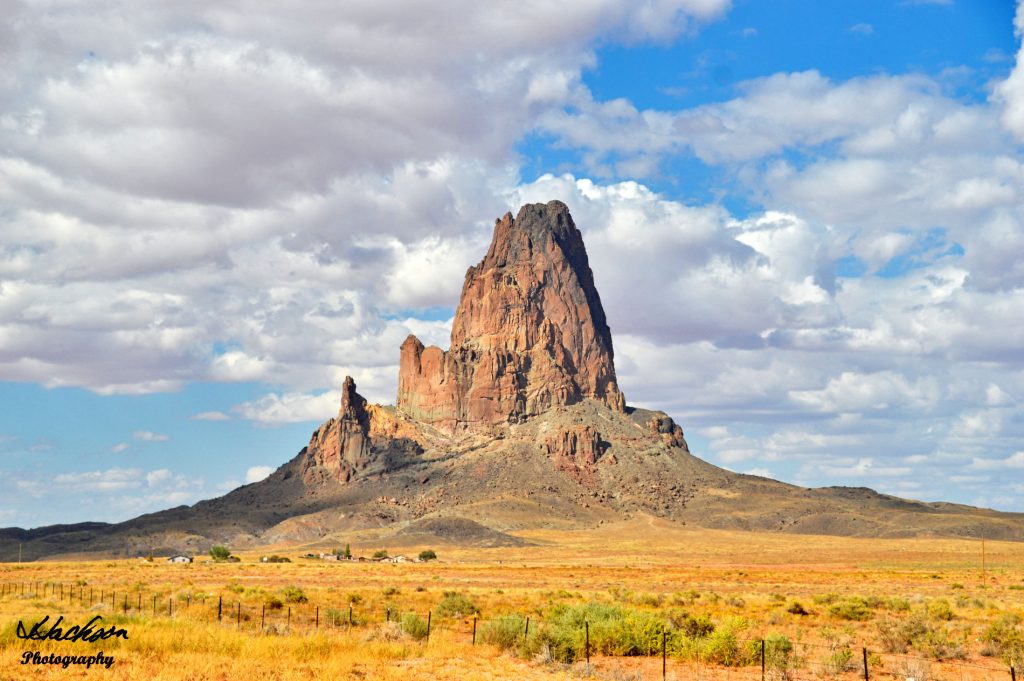 Above, Agathla Peak, the name comes from the Navajo name aghaałą́, meaning much wool, for the deer and antelope fur that was found around the ancient volcanic plug.  In Spanish, this peak, which is over 1,500 feet (457 meters) above sea level,  is known as El Capitan and is a beacon that can be seen on the drive on US Highway 163 from Kayenta as you get near to Monument Valley.

This majestic mountain is considered sacred by the Navajo people. 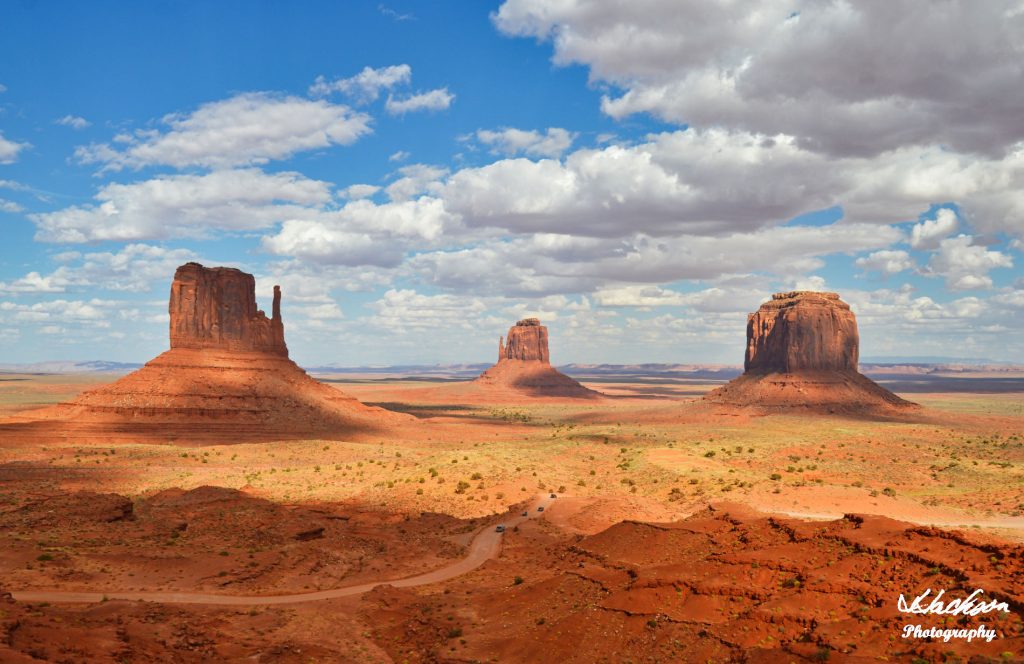 The best way to get to Monument Valley depends on which way you are coming from.  We came from the Salt Lake City area and stopped at the Four Corners along the way.  Then we drove west to Kayenta, Arizona, then north on Highway 163.  This route takes you through Arizona, then you briefly enter Utah, then head slightly southeast into Arizona and the Monument Valley Navajo Tribal Park.

Keep in mind that this is not a USA National Park, therefore no National Park or Golden Eagle passes are accepted. 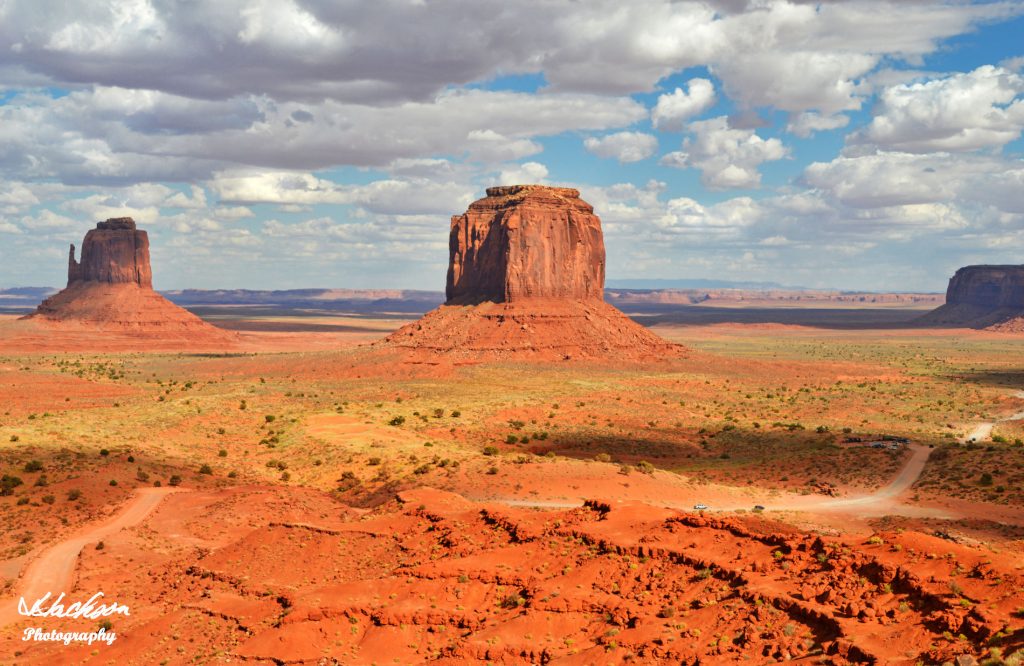 From the visitor center, you will see the monuments in a panorama in front of you.  You will also note the butte just in the center of this photograph and that you are in equal height.  Millions of years ago this valley was under the ocean and as the sea receded, eventually it became solid red sandstone mesa that continues to erode over time. 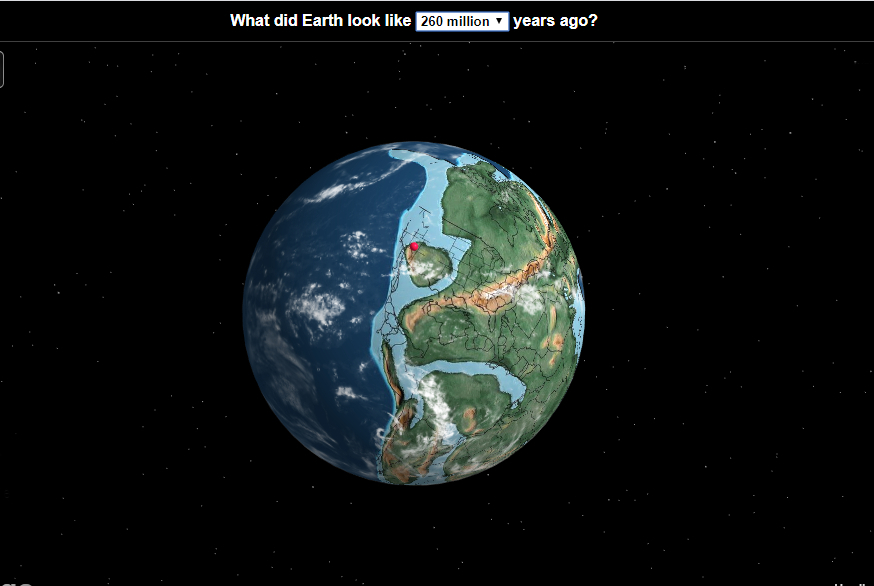 Above, what the area of Monument Valley looked like 260 million years ago, as a great island. 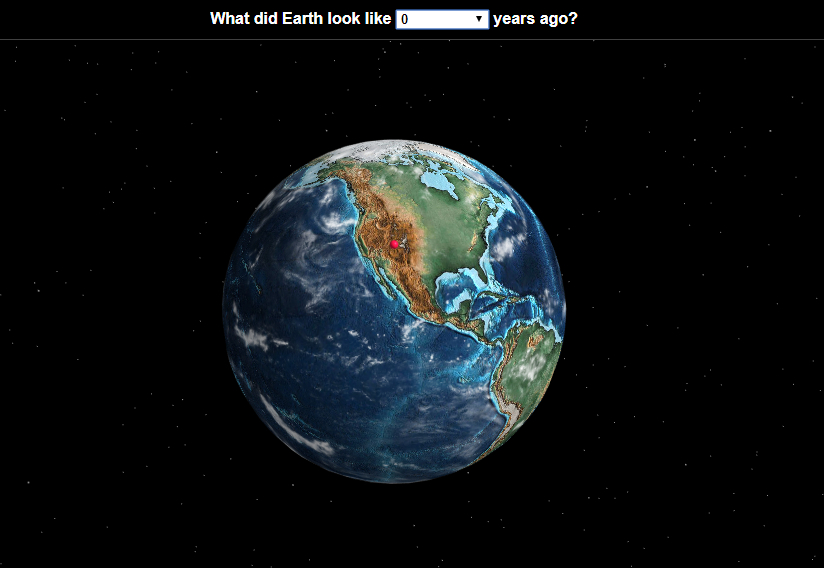 This site allows you to look at different places in the world to see how it has changed over time:    https://dinosaurpictures.org/ancient-earth#0 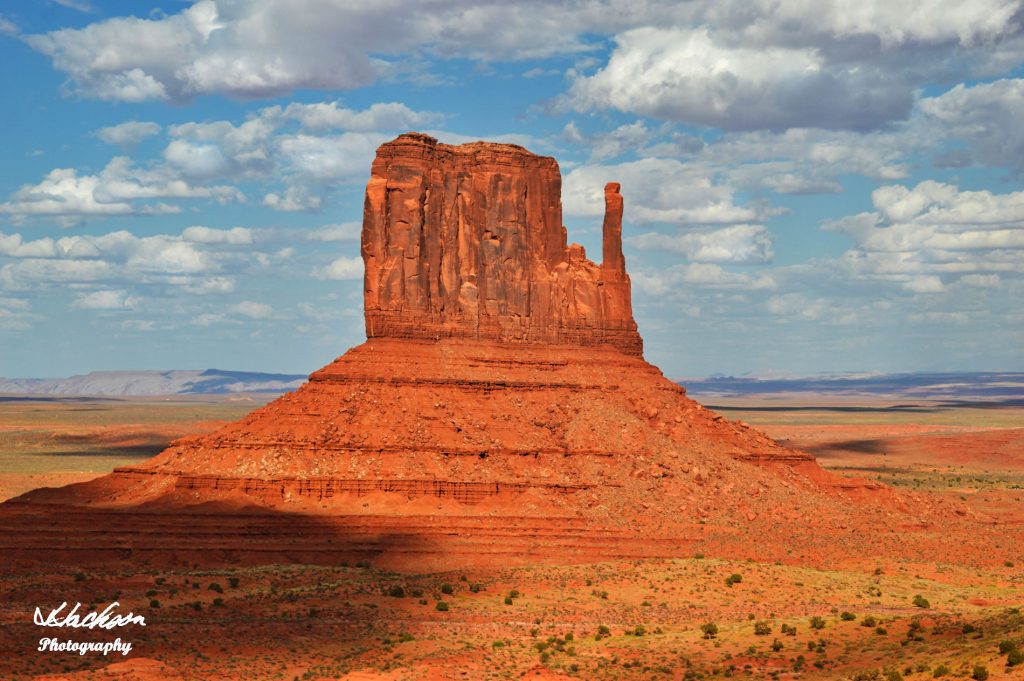 Above, the iconic left mitten in the valley that John “the Duke” Wayne called “God’s Treasure.”  The entire Navajo reservation covers about 45,000 square miles and is among the wonders that include the Monument Valley. 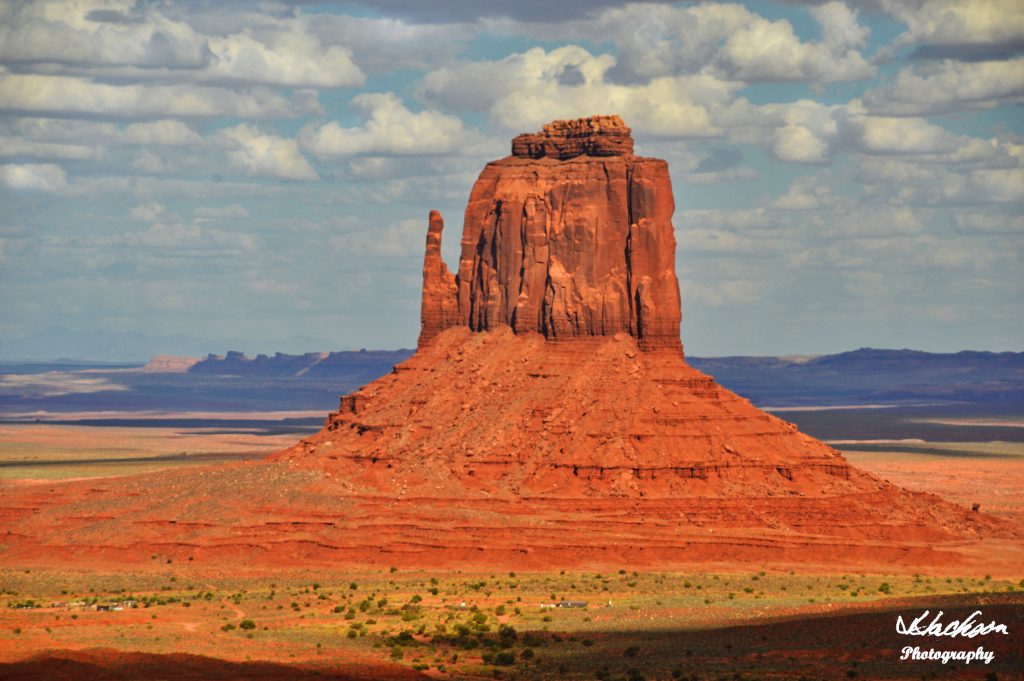 Above, the right mitten that was once part of a massive, solid red sandstone plateau.  As part of the admission price, you are allowed to take your vehicle along the 17-mile valley trail.  The road is unpaved but in reasonable good condition and begins just past the visitor center parking lot.   Make sure to obey all the signs and know the guidelines before you begin the drive.  They are posted inside the brochure that you will get when you pay your admission. 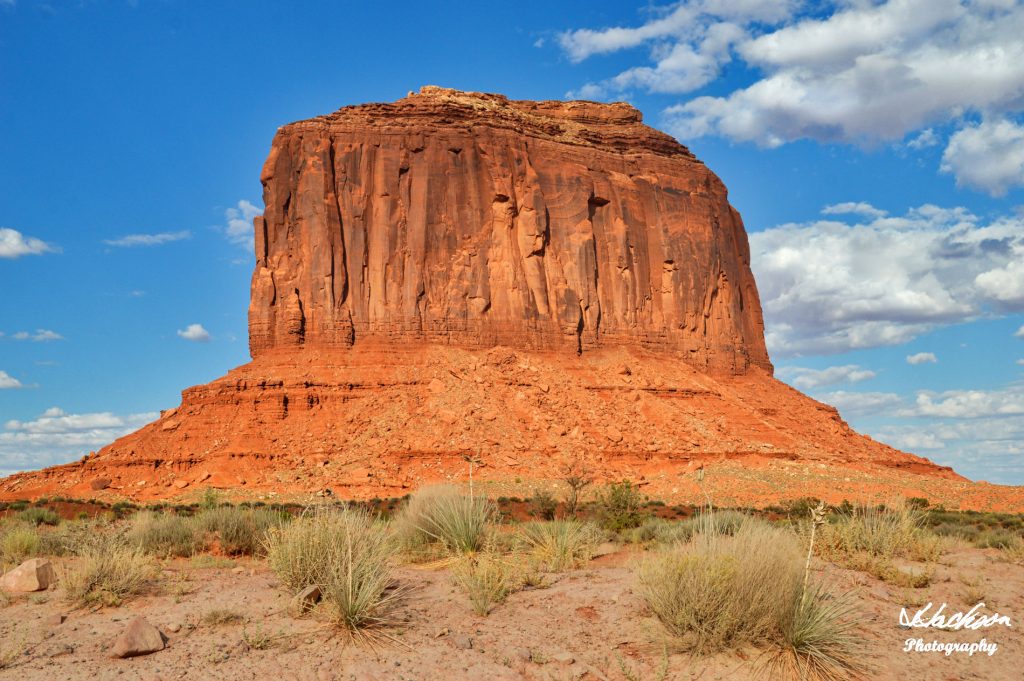 As you take the drive try to understand what geological formations you are seeing. There are three basic types: buttes, mesas, and spires.  Above is Merrick Butte which is best photographed in the afternoon to capture the full sun on this stunning creation. 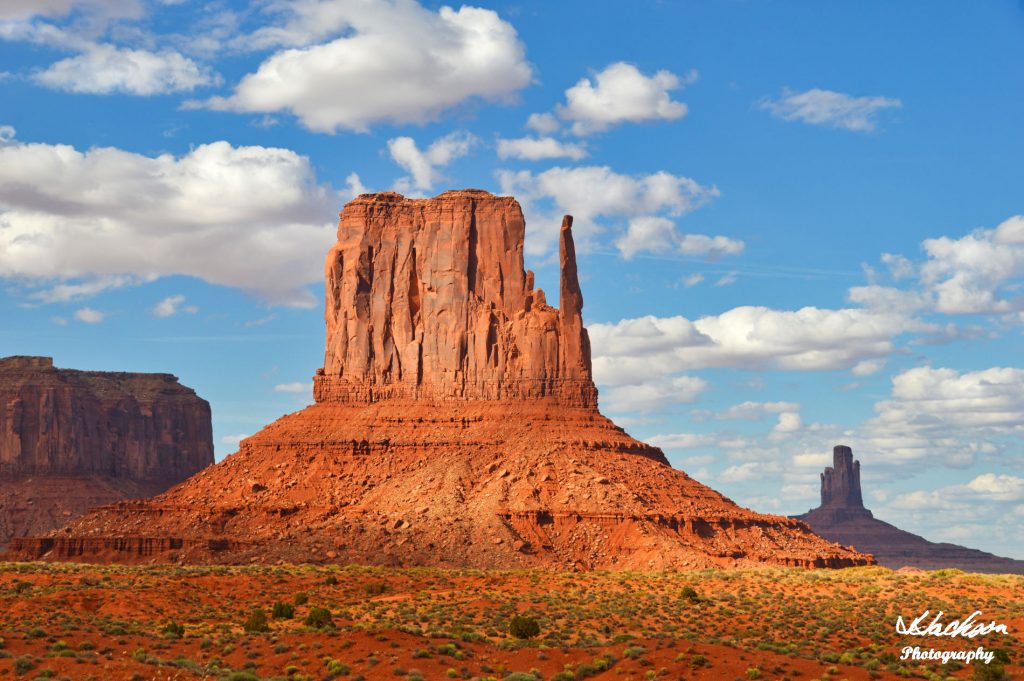 The right and the left mittens are also buttes.  As with many of the monuments in the valley, they change throughout the light of day and with the changing of the weather.  My favorite time is when the sun lights up their dramatic face and the clouds dapple the red sandstone in mild shadows. 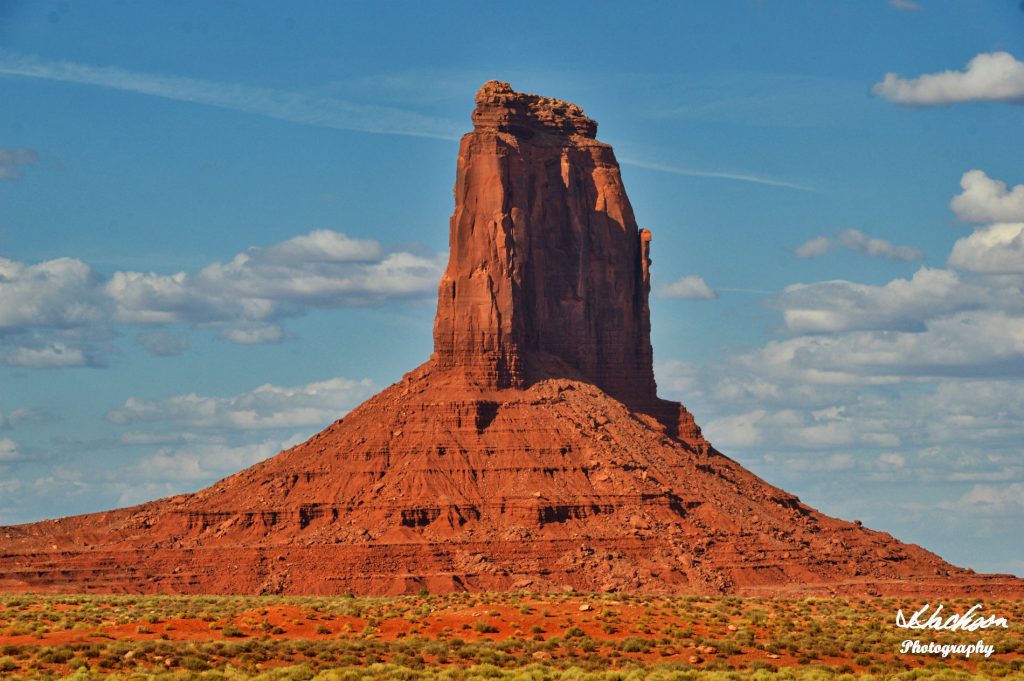 Above, if there was one thing that the world-famous photographer Ansel Adams hated was vapor trails from airplanes getting in the way of one of his majestic pictures.  It seems that with modern world travel, this becomes a normal daily occurrence:  Vapor trails that pass right through an iconic shot and perhaps a once in a lifetime opportunity. 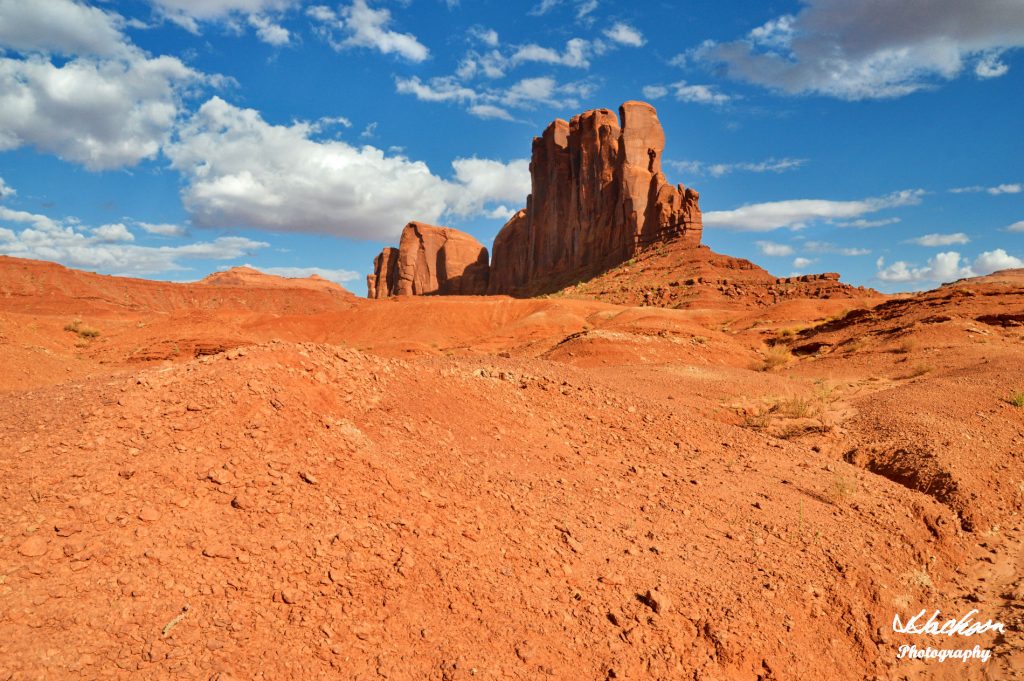 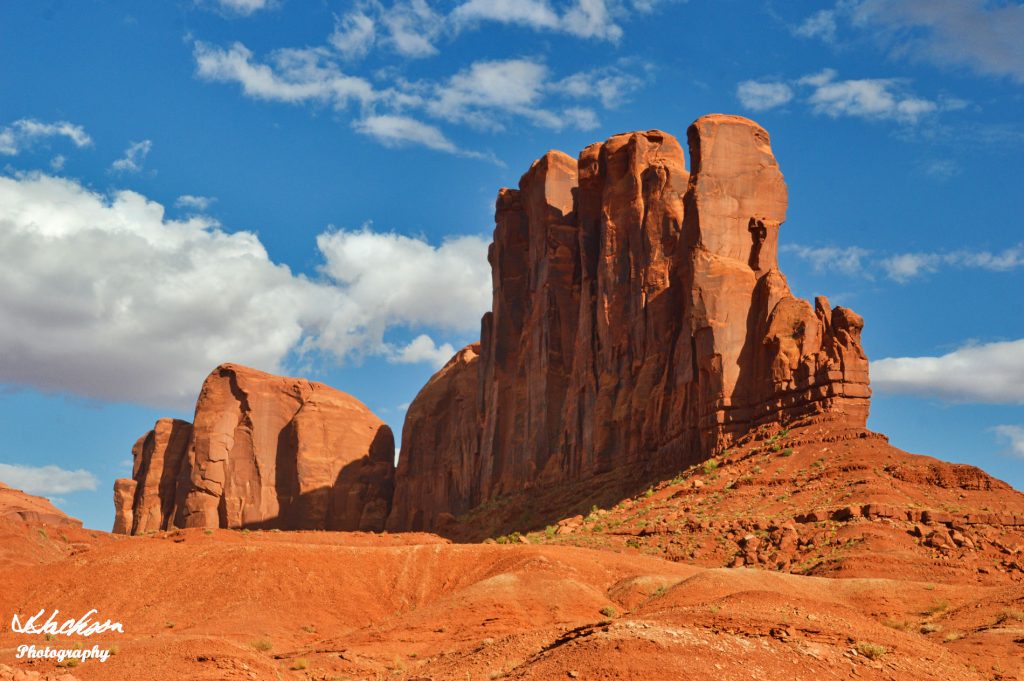 Above, this is Elephant Butte which is immediately recognized as you traverse through the valley.  The rich, red sandstone makes for an amazing contrast with the heavenly blue skies and the white puffy clouds. 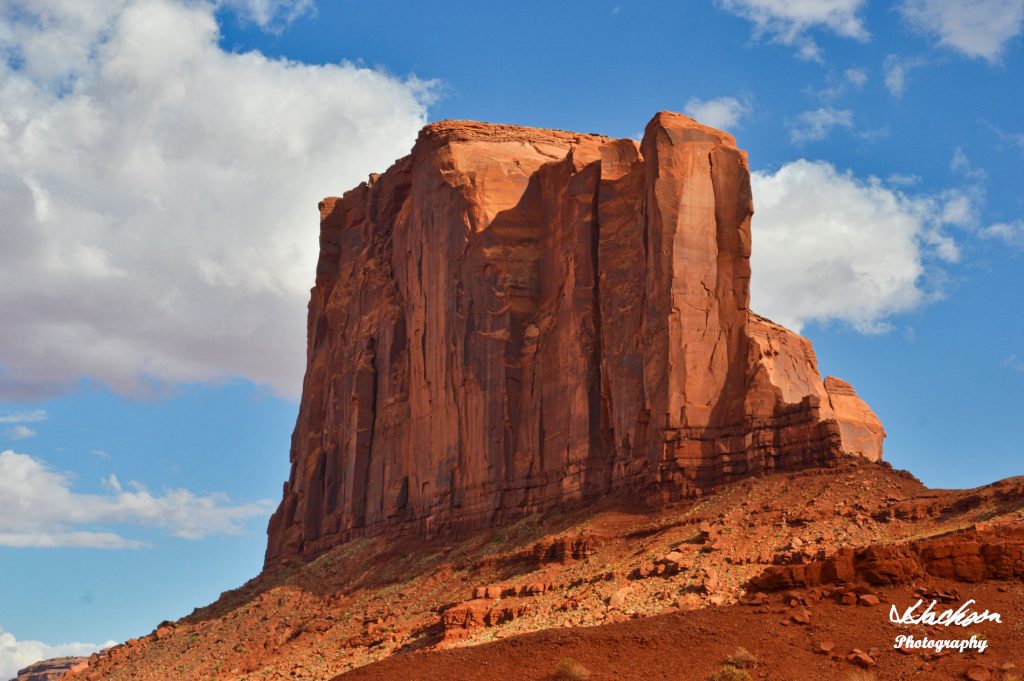 The valley drive is an unmarked two-lane road from the entrance at the visitor parking lot until you reach John Ford’s Point, named in honor of the Hollywood director who filmed the movie Stagecoach here.  John Wayne played the Ringo Kid in that Academy Award-winning movie. 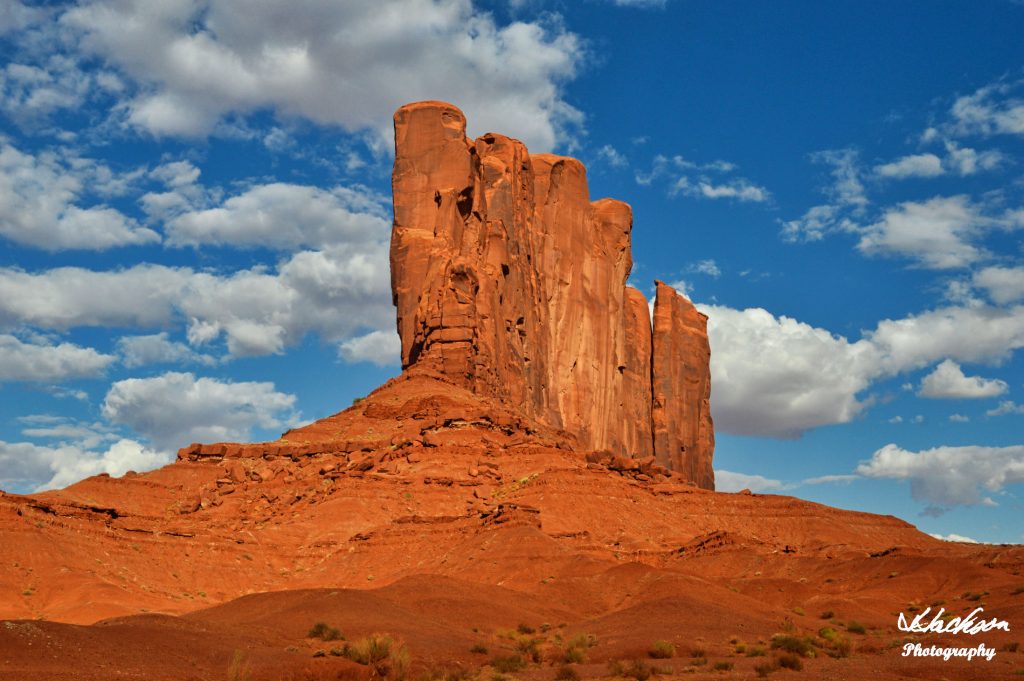 Above, Camel Butte near John Ford’s Point, which took us a little time to find the right angle that would give the camel’s appearance.  As an aside, I have always found it odd in this place where there are typically always white puffy clouds and yet so little rain. 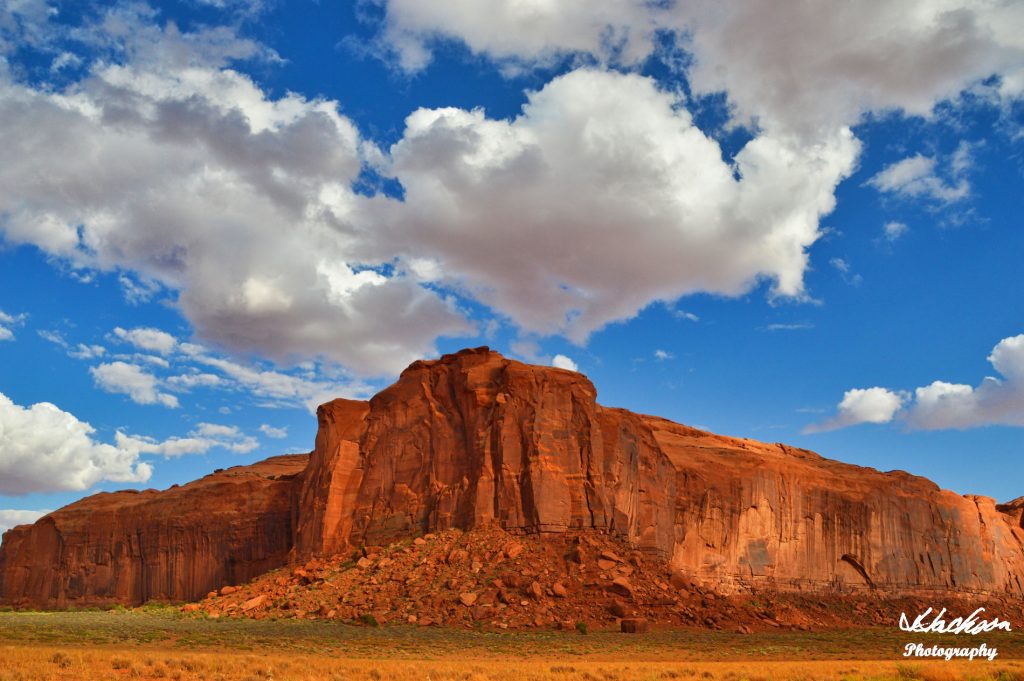 So, we have seen many examples of buttes, and now we can see a mesa, the Rain God Mesa, where the Valley Drive becomes a one-way road.  This mesa is the geographical center of the park and is a place where the Navajo medicine men prayed and gave thanks to the Rain God.  In the photo above you may notice the deep red-brown streaks along the cliff face.  These streaks are made by water seeping out of the mesa and running down the side to the base of the monument.

Above, the southern face of the Rain God Mesa, is dramatic to behold when the Sun God casts its light upon the sheer cliff of this magnificent monolith. 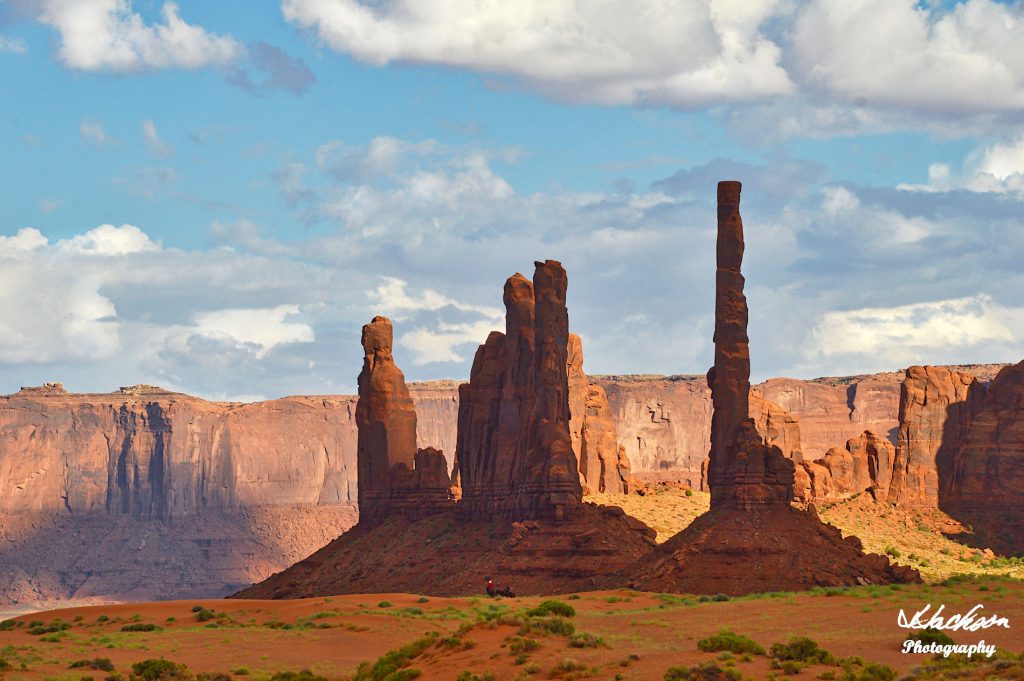 When you see these red sandstone features you can easily recognize them as spires, the third of our geographical formations.  The one on the right is the Totem Pole spire, and the group on the left is the Yei Bi Chei spires, a formation resembling Navajo spiritual dancers emerging from their Hogan. 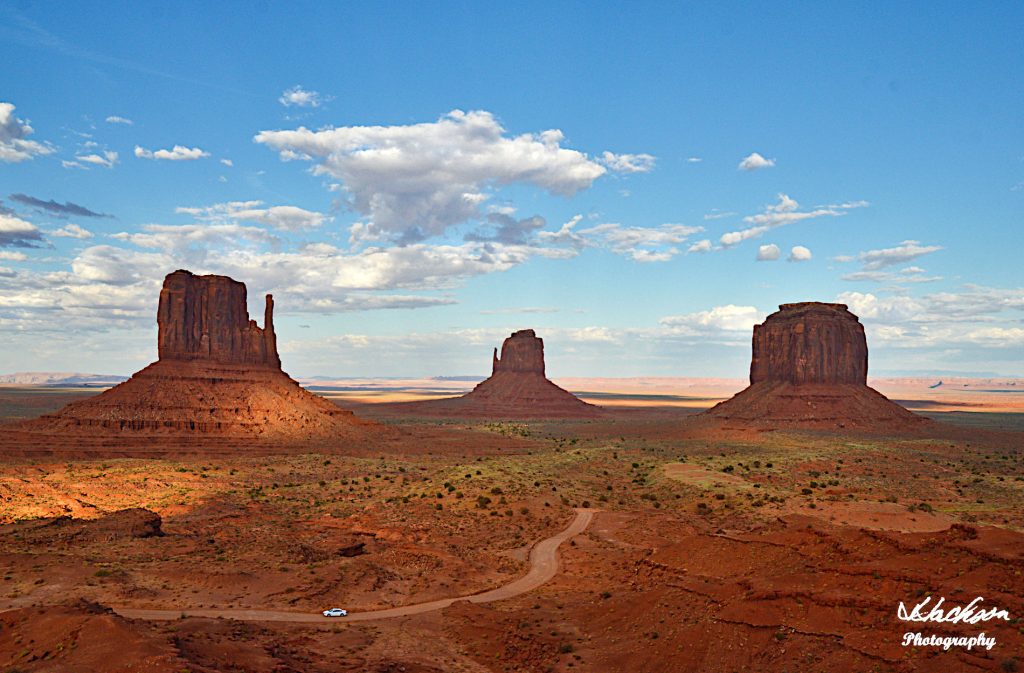 As a photographer, it is sometimes difficult to express perspective, especially in a place of this size and grandeur.  In this photo, you can see a white car as it is driving along the Valley Road and it should give you some idea of how large the monuments are.  This is the left and right mitten and the Merrick Butte. 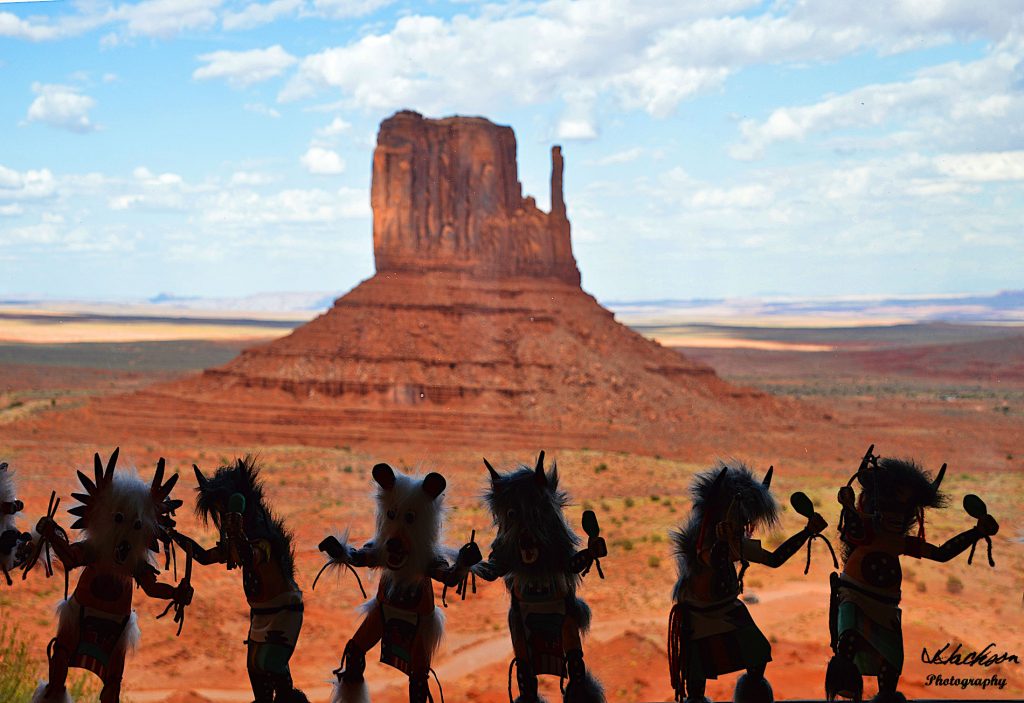 The Monuments Men, Navajo Kachina dolls, are storytellers that the Hopi Native American Indians originally created.  They have been adopted by the Navajo tribe but are more so an artistic item to them.  In the Hopi culture, they are more spiritual and given only to those who are or will be responsible for the respectful care and well-being of the doll. 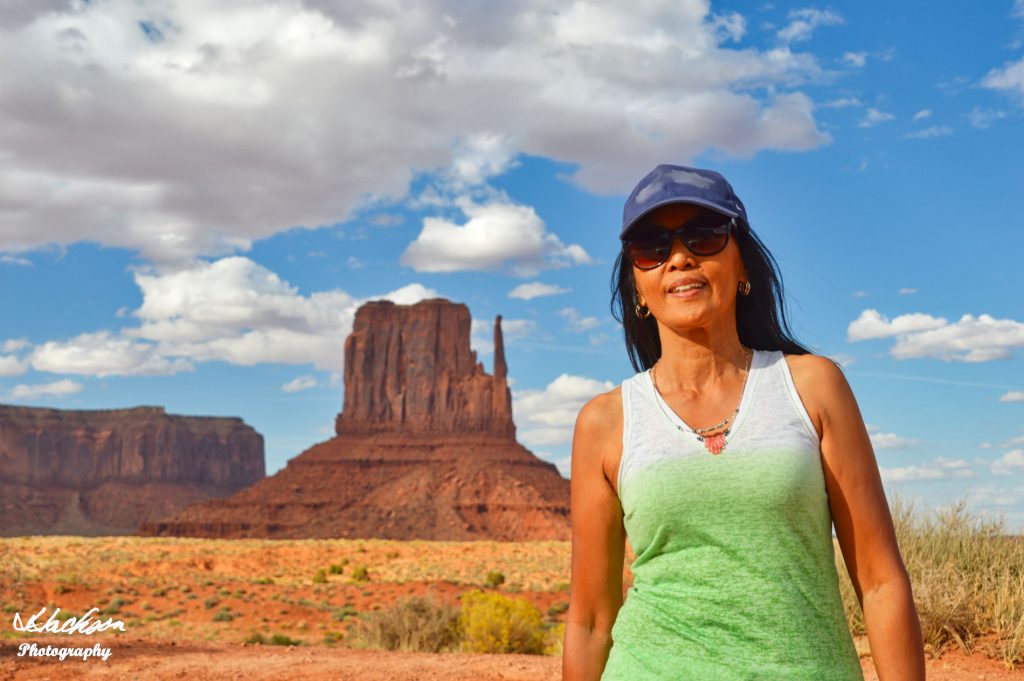 When you are in the Monument Valley, look around you and consider what it took the great Mother Earth spirit to create these gigantic monuments. 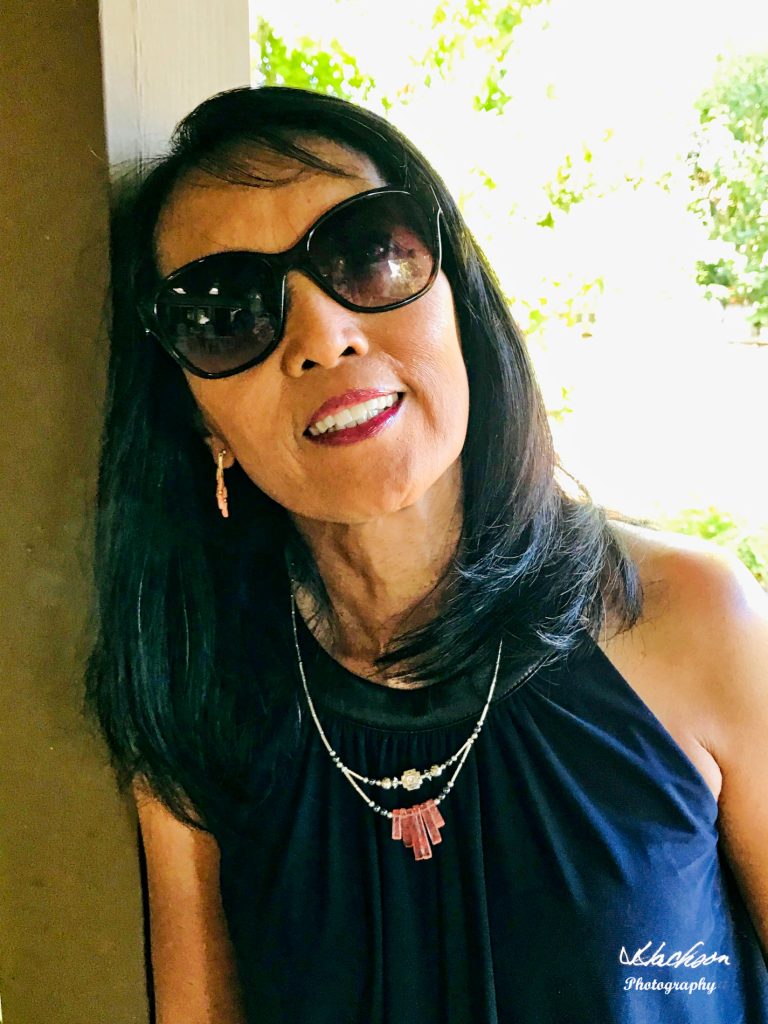 A souvenir of a hand-made Native American necklace makes a wonderful gift and a great remembrance of a very special and magical place. 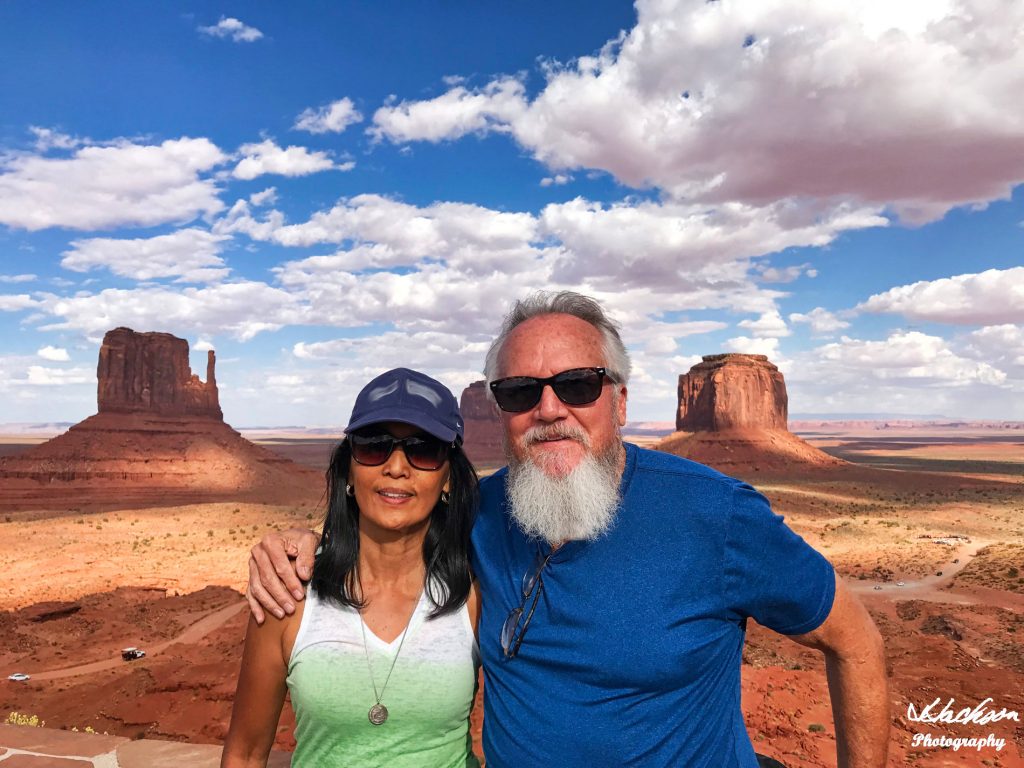 Monument Valley is considered one of the 7 Wonders of Navajoland and when you journey there you will understand why many consider this spiritual place one of the world’s greatest treasures.

You will be humbled as you put another drop in the bucket.

All photographs are the copyright of Jim Jackson Photography. Please contact me with any questions, comments, or for authorization to use photos or for signed, high-resolution prints.