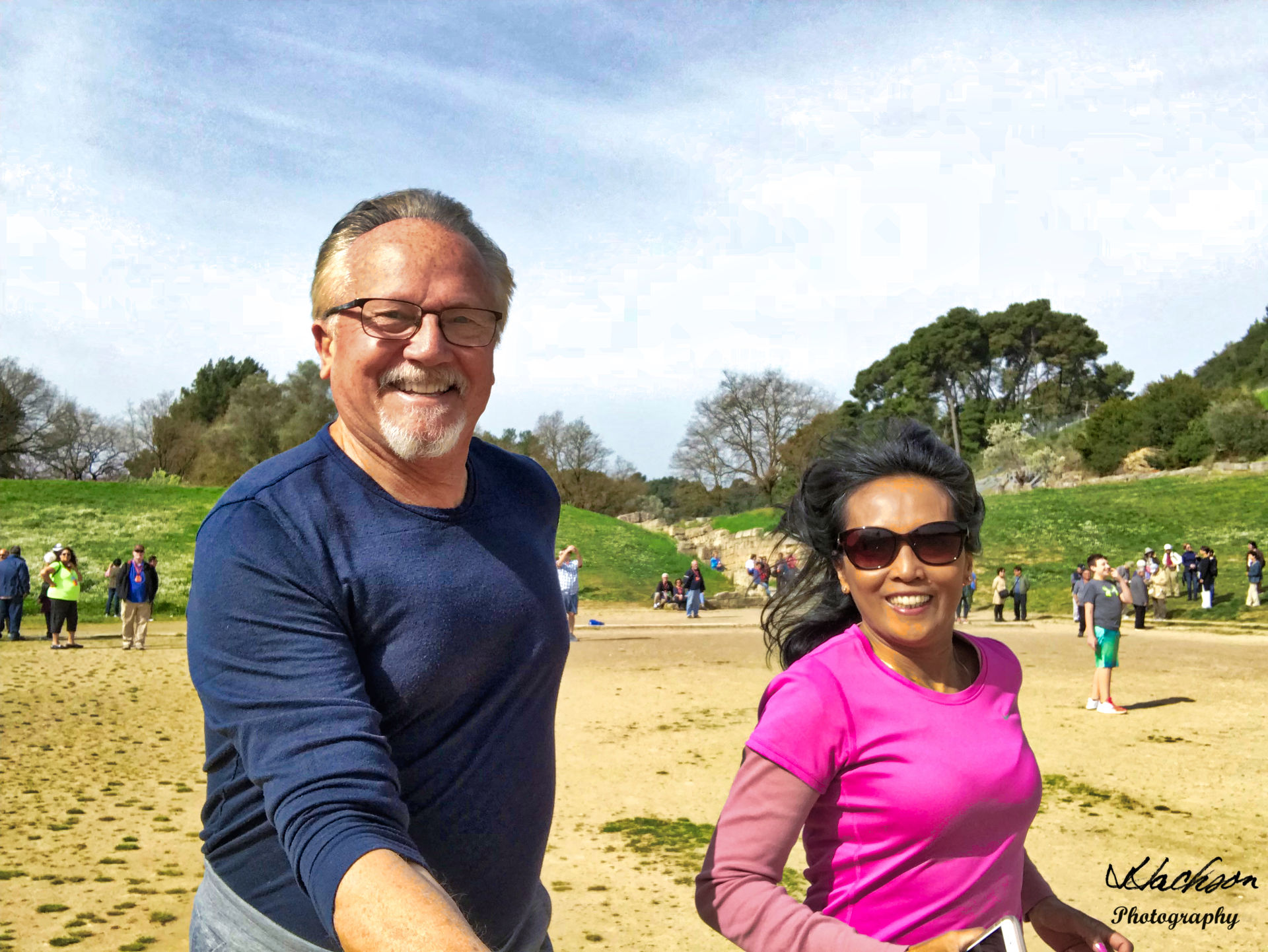 On this trip to Greece, I haven’t been paying much attention to the time of day or for that matter, what day it is. Our tour manager is great at coordinating everything and telling us when to be ready and when we would be going someplace or leaving someplace to go to another place, or when we would eat breakfast, lunch or dinner. Eventually, I stopped bothering to keep track of time.

I do know that today is Saturday and somewhere in the world, they are celebrating St. Patrick’s Day. How do I know? Well, for one, there is a lady on our tour group who is wearing a gaudy, green plastic necklace with lots of shiny plastic shamrocks around her neck, so I knew it must be St. Patrick’s Day. 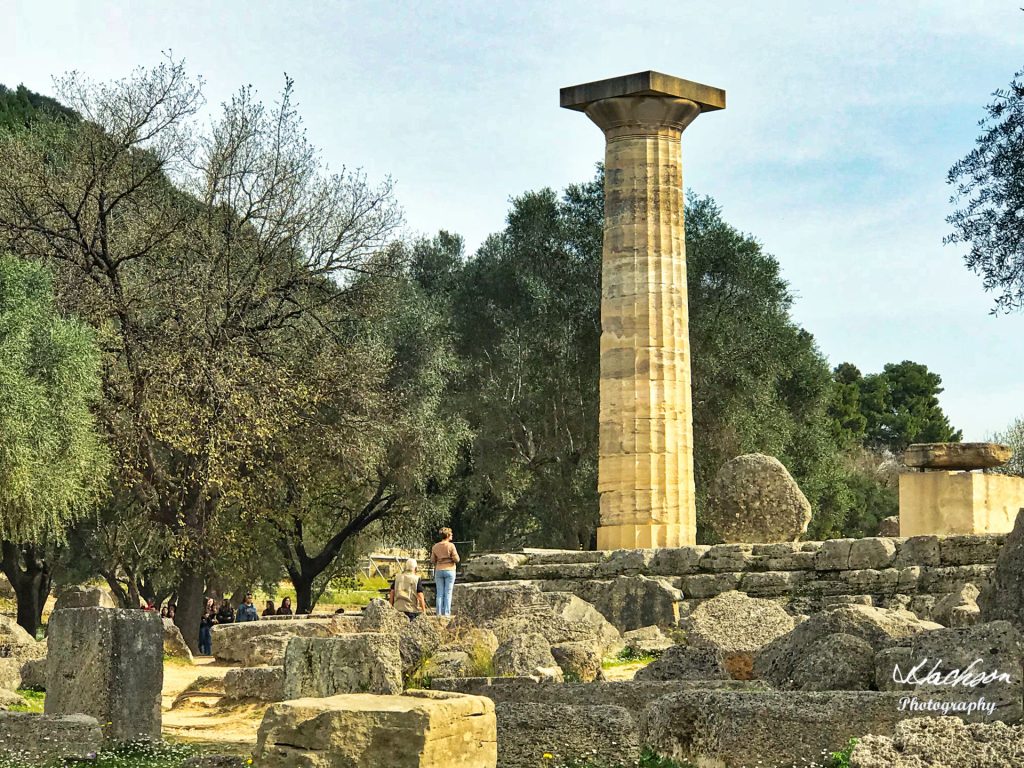 Above, the site of the very first Olympic games held in 776 B.C.

Not having to worry about what day of the week it is or what date is on the calendar is a sign that this tour management is doing a great job. Anyhow, after breakfast, we left our wonderful hotel and drove by bus to the nearby archaeological site of Olympia. This site is significant as the Sanctuary of Olympian Zeus, and of course, the ancient stadium where the first Olympic Games were held in 776 B.C. 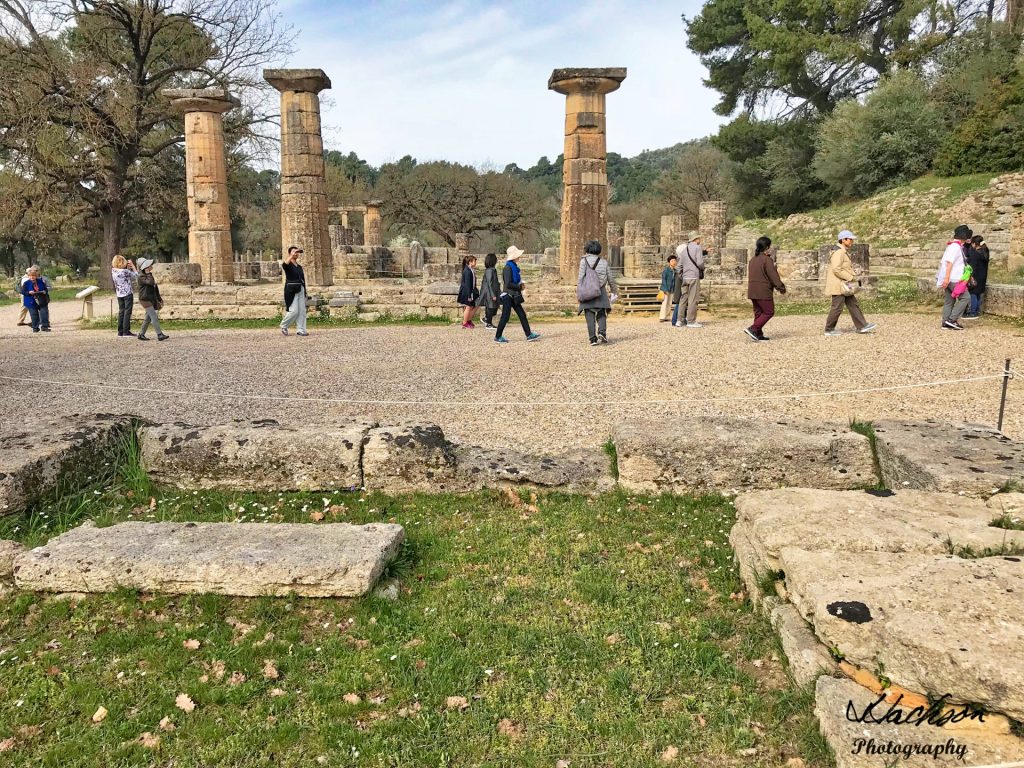 Above, the vast archaeological grounds of the first Olympic village

Before we came on this trip to Greece, my wife Nida and I had known that this was the site of the first Olympics and also the site of the very first marathon. She has run two marathons thus far and we both enjoy running and so we hoped that we would have an opportunity to run the marathon track. We wore our running gear just in case. We had received conflicting reports as to whether it was allowed to run on the track, let alone walk on this sacred site. We were beyond thrilled to find out from our hotel manager that we could! 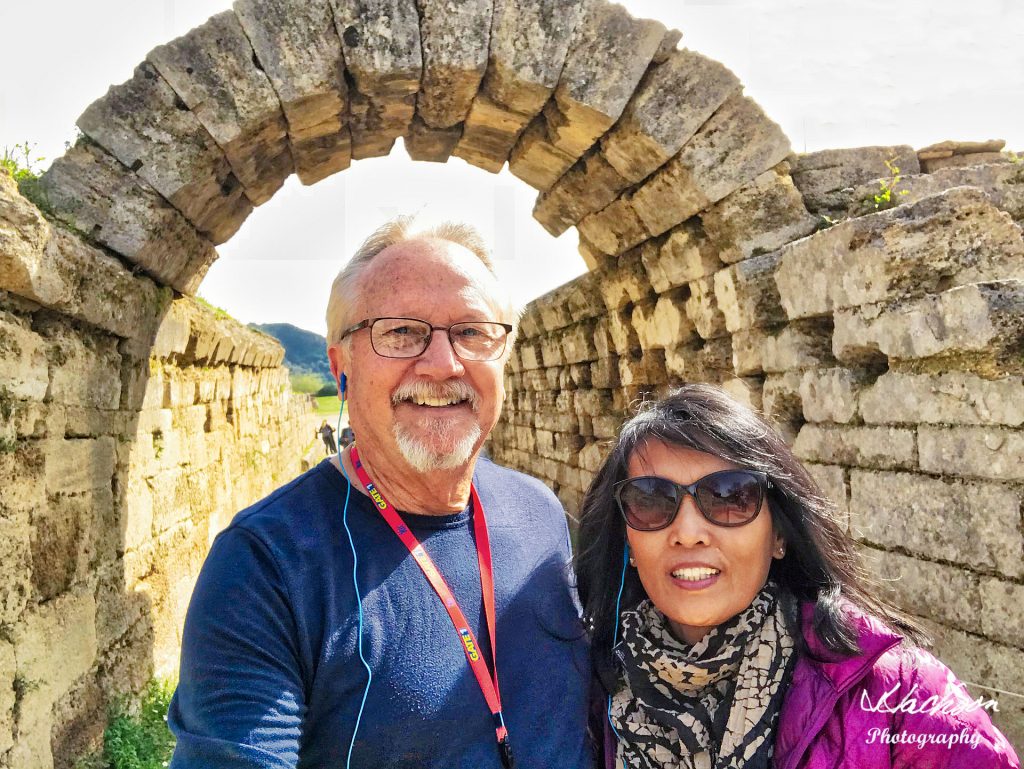 The archway where every Olympian entered the track

When you first arrive at the Olympian complex, you immediately realize how vast it is. There are ancient ruins scattered all about, some have been set upright, some lay helter-skelter in heaps where they fell, perhaps hundreds of years ago. 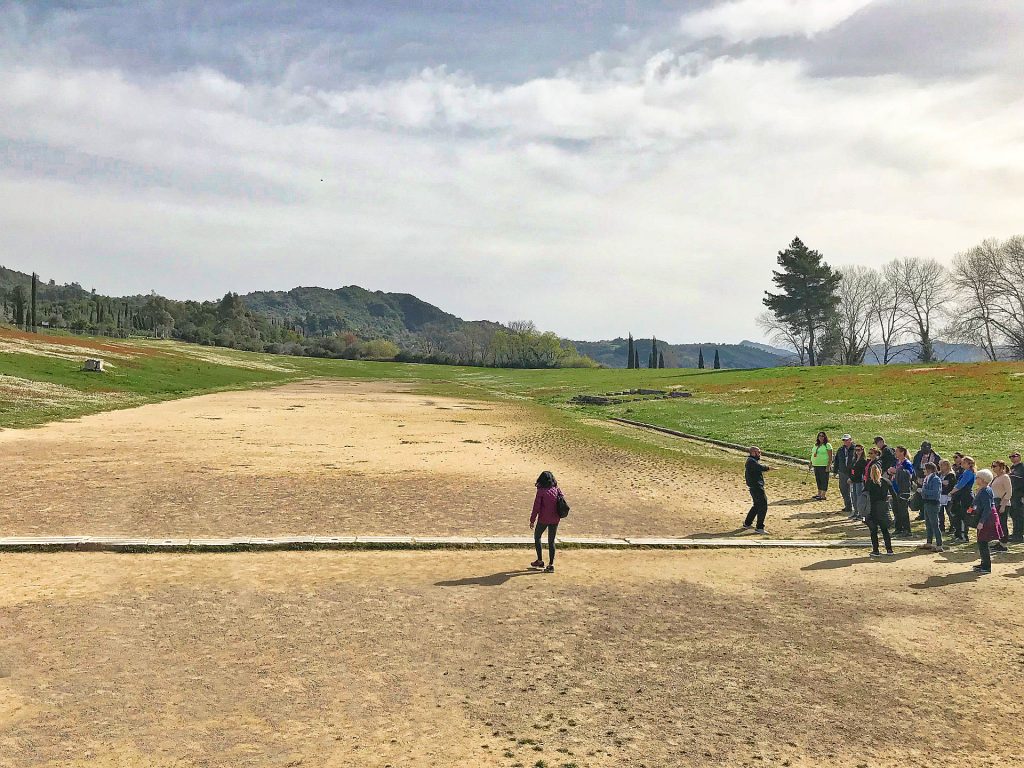 Before we even reached the Olympic track, our tour took us through several acres of ancient ruins. We walked along narrow paths, worn by several decades of foot traffic among the crumbling marble, limestone, and granite. It is an amazing scene and an equally amazing time to be here as there are vast fields of brightly colored wildflowers in full bloom. It was as if Picasso had splashed his wild color pallet among the Greek landscape. 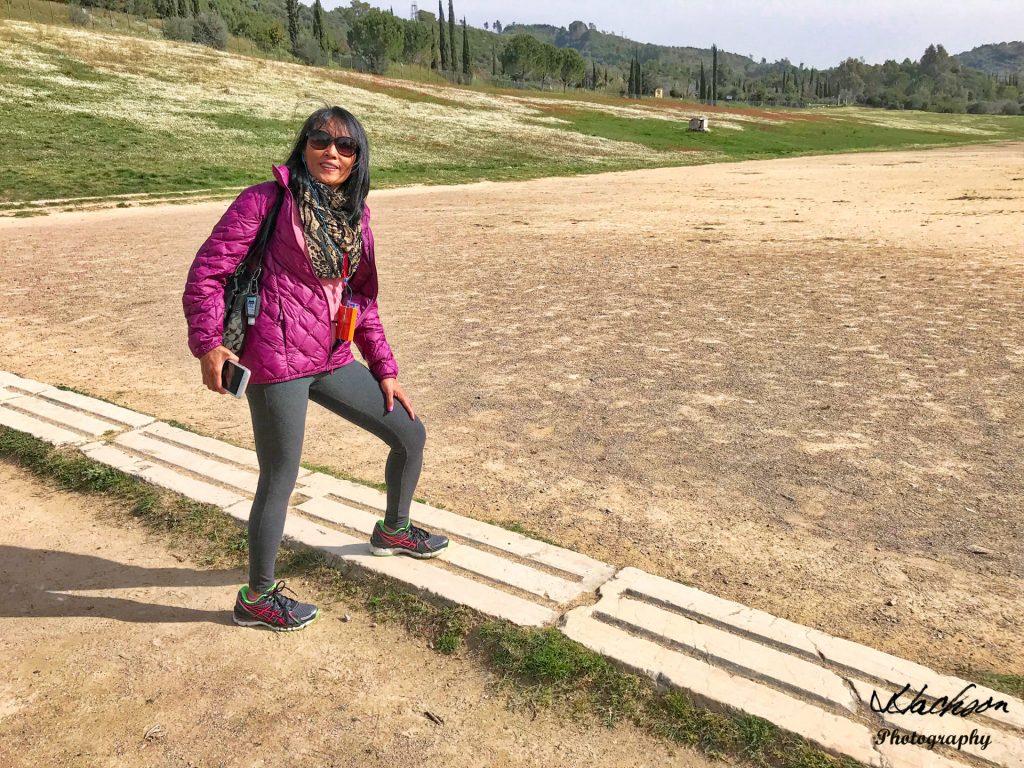 Above, the Olympic track is lined with a variety of colorful wildflowers as Nida takes her mark on the original marble starting line

After walking through an immeasurable amount of ruins, we finally walked through a narrow stone archway where the first Olympians had also entered as they made their way to the Olympic track. As we walked through the archway it opened to a long, football-size track, covered in crushed rock. There was a wide marble line that went from one side to the other. The dirt track was surrounded by very low hills covered in wildflowers. Now here is where I was a bit taken back. I was expecting a standard circular track like you would find at most high schools and colleges. But this track wasn’t oval at all, it was just a large rectangular track that the contestants ran from one end to the other. The original Greek marathon was 26.2 miles and included a great distance outside the actual stadium.

Below, we are ready to begin our run on the ancient Greek marathon track: 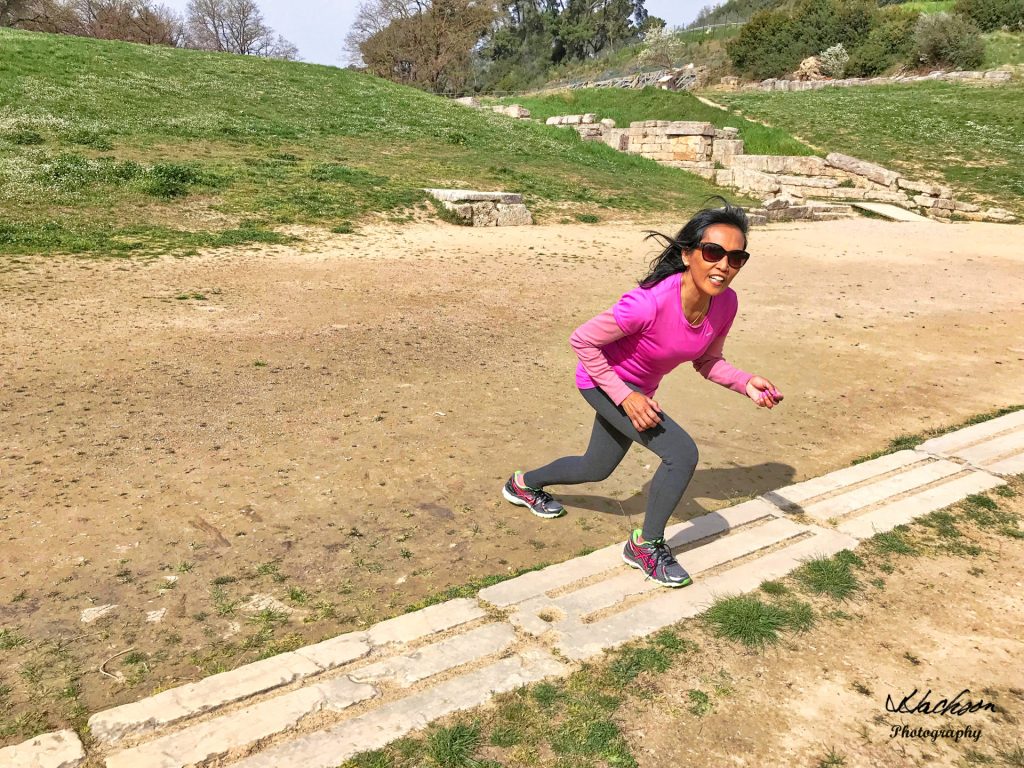 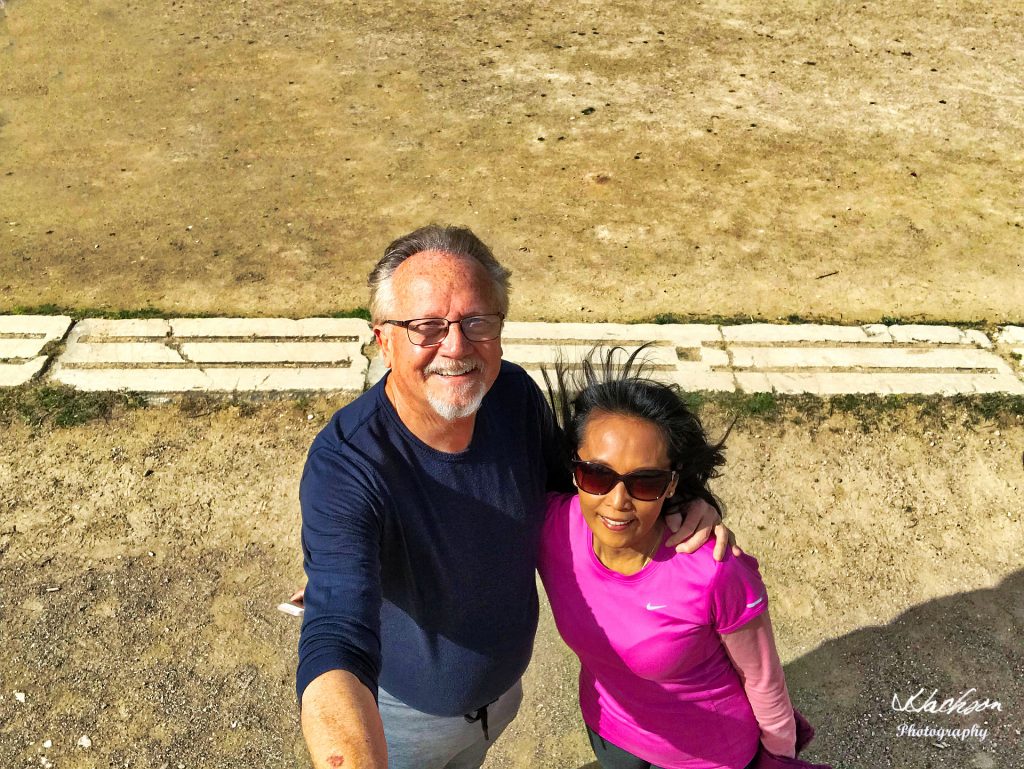 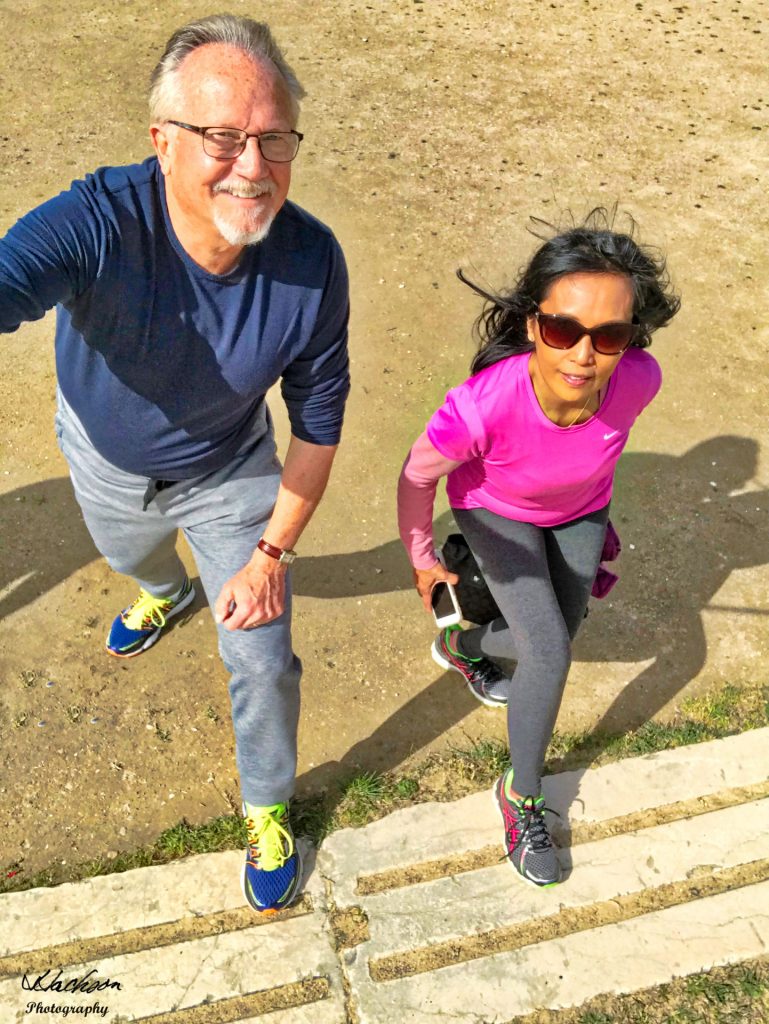 This time of the year, at least in this part of Greece, it is a bit cold. Although the elevation here is 226 feet above sea level and compares to that of Los Angeles, it is a bit cooler here this time of the year. We dressed appropriately for running at the cooler temperature, plus we knew that we probably wouldn’t have much opportunity to change if we wore running shorts, so we opted for our sweats. 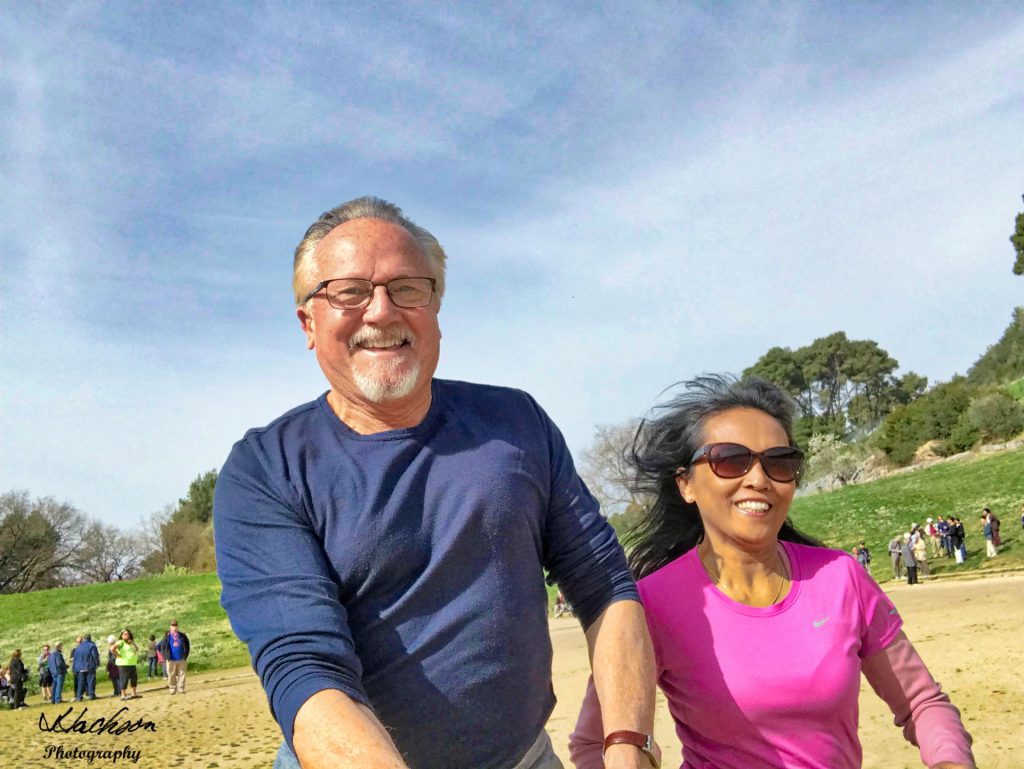 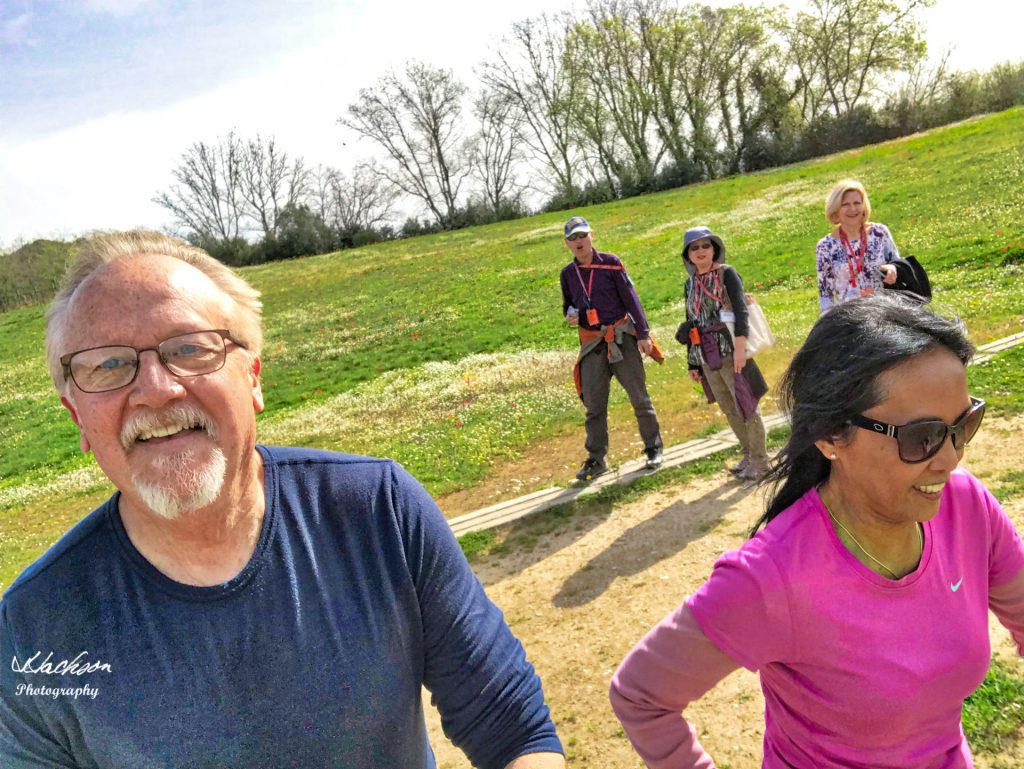 We ran the entire length of the track which began at a long slab of white marble that was the actual starting line back when the first Olympics were held here. People watched as we ran the course and one spectator joined us on our mini-marathon. 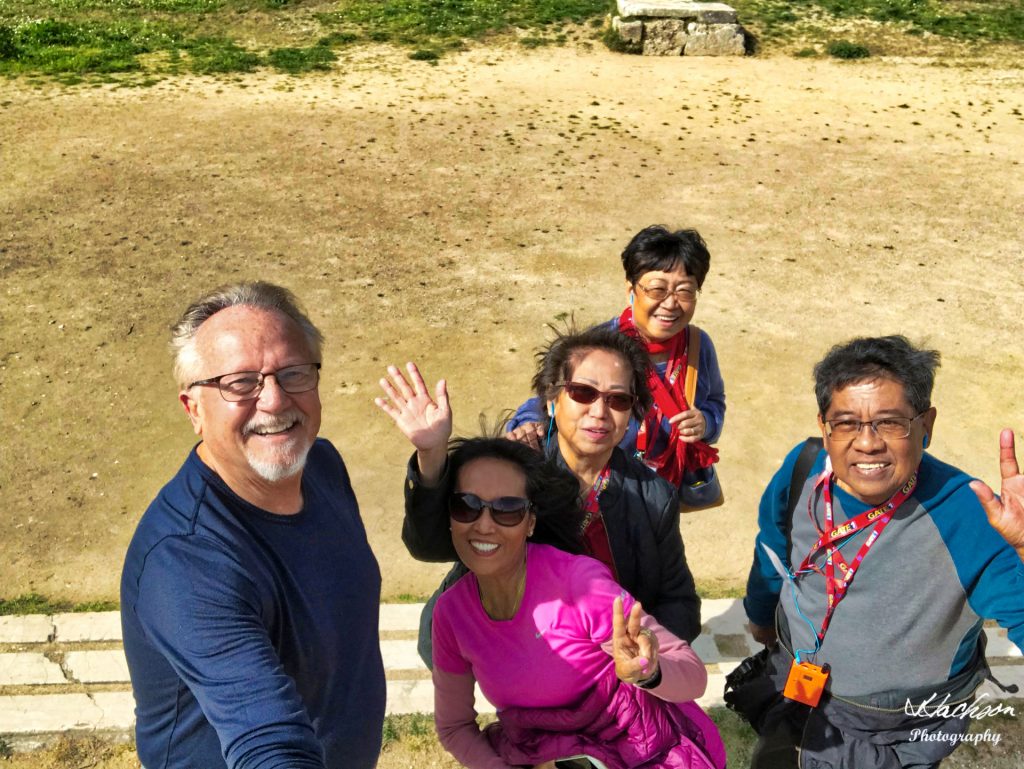 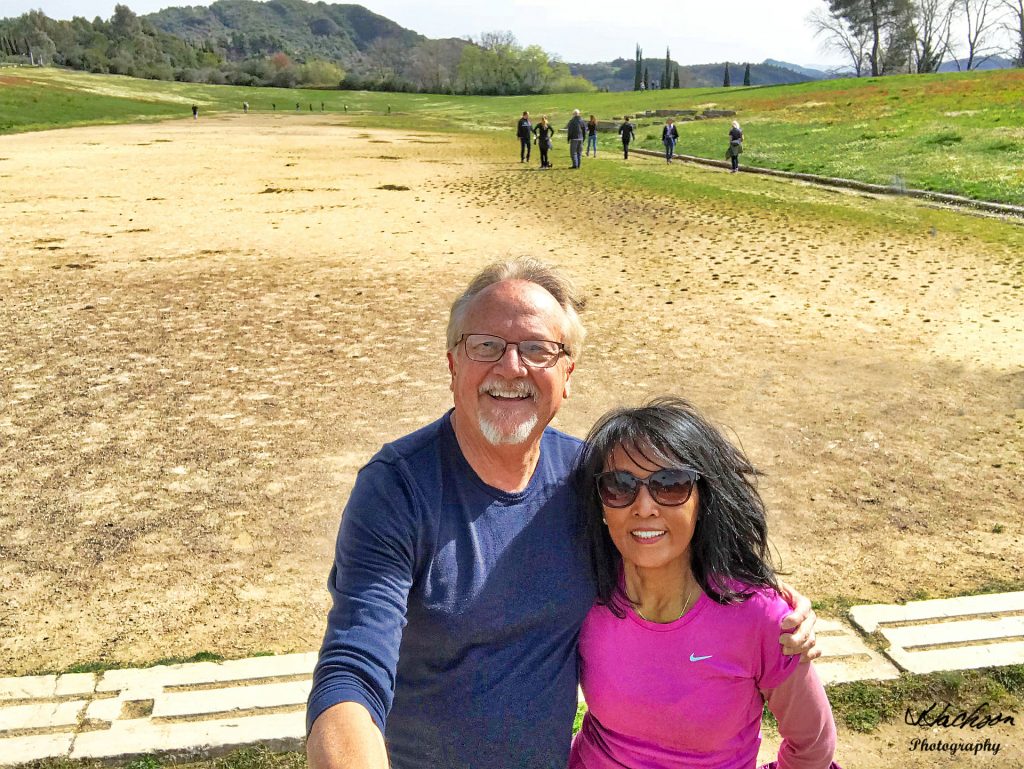 We reached the far end of the track, taking selfies along the way, then we crossed the marble finish line at the other end, turned around and ran full speed back to the starting line. People who were standing on the sidelines cheered as we ran by, and it gave us great encouragement! As a man moving beyond middle-age, and the onset of my seventh decade on Earth, I felt a major sense of accomplishment and would always consider this as a major triumphant achievement. 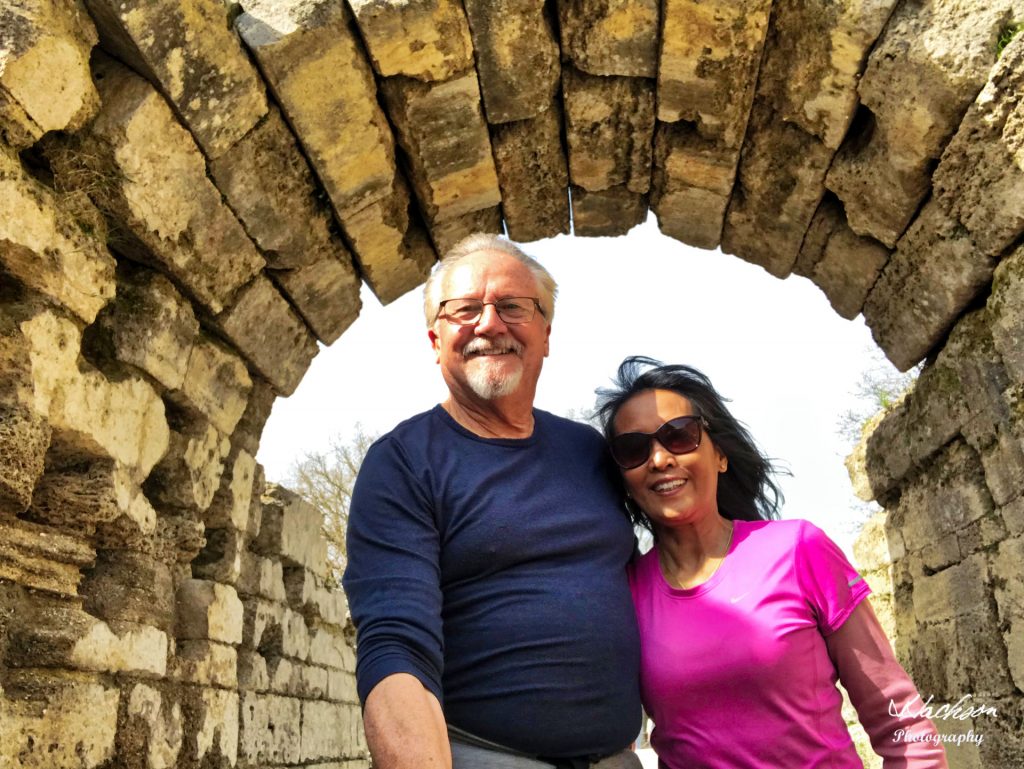 We exited the Olympic stadium through the same ancient stone archway where we had entered before our run but now feeling rather honored to have been able to run on this “sacred” site.

Add another drop in the bucket!

All photographs are the copyright of Jim Jackson Photography.  Please contact me for authorization to use or for signed, high-resolution copies.