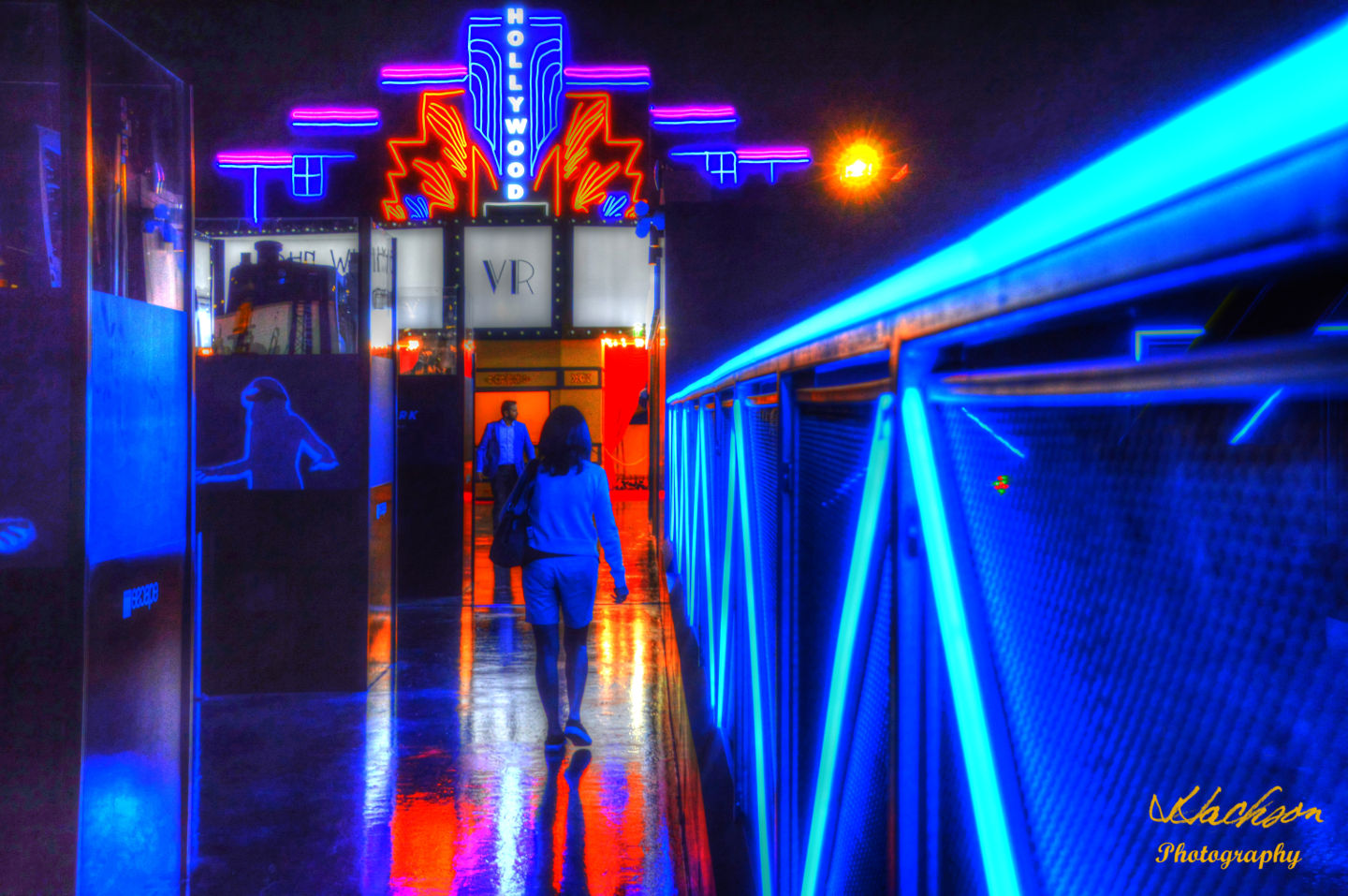 The Dubai Mall is the largest mall in the world based on total area. Would you expect anything less from Dubai? As of April 2017, the UAE holds 186 Guinness World Records, 139 of those records are held by Dubai alone. Now, as for me, I am not a huge fan of shopping malls and will do just about anything to get out of going to one, especially at Christmas time. However, I cannot say the same for the Dubai Mall, a part of the 20-billion-dollar downtown development that includes over 1,200 shops. But it is not just the stores that capture your attention; it is the overall “theme park” atmosphere that grabs your interest. 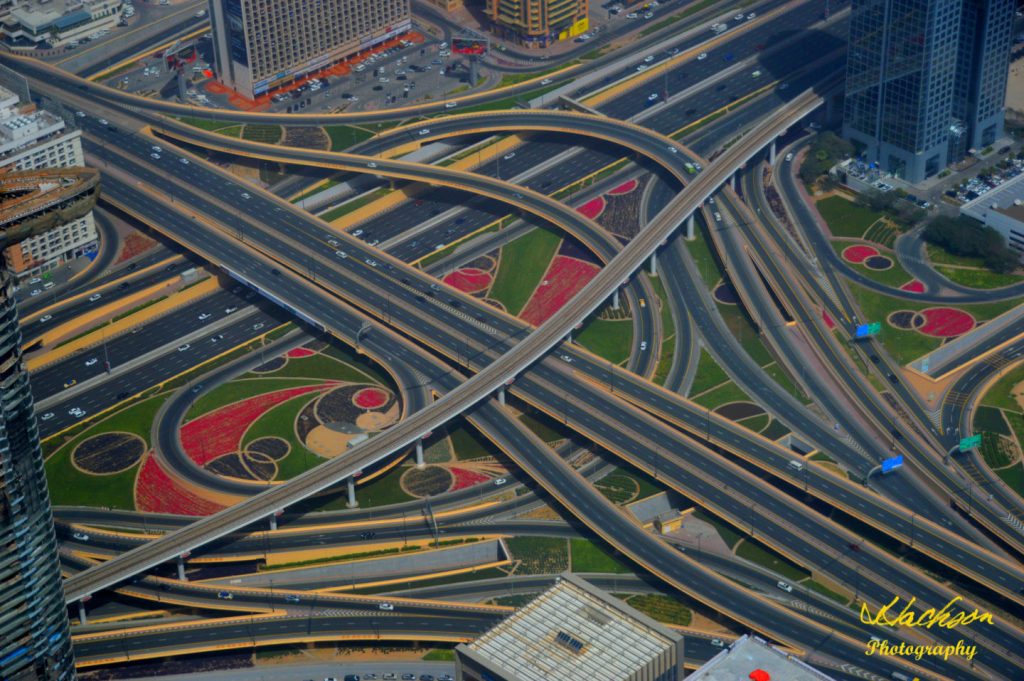 All roads lead to the Dubai Mall 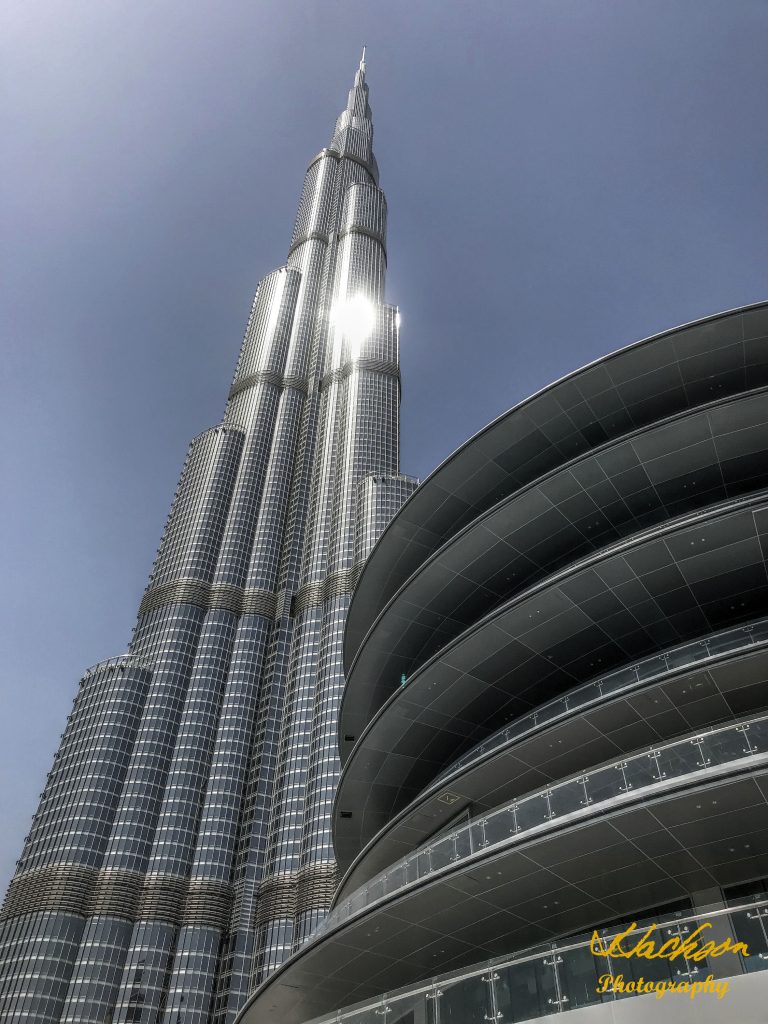 The Dubai Mall sits in the same complex as the Burj Khalifa and in fact, you can enter the mall to reach the tallest building in the world. 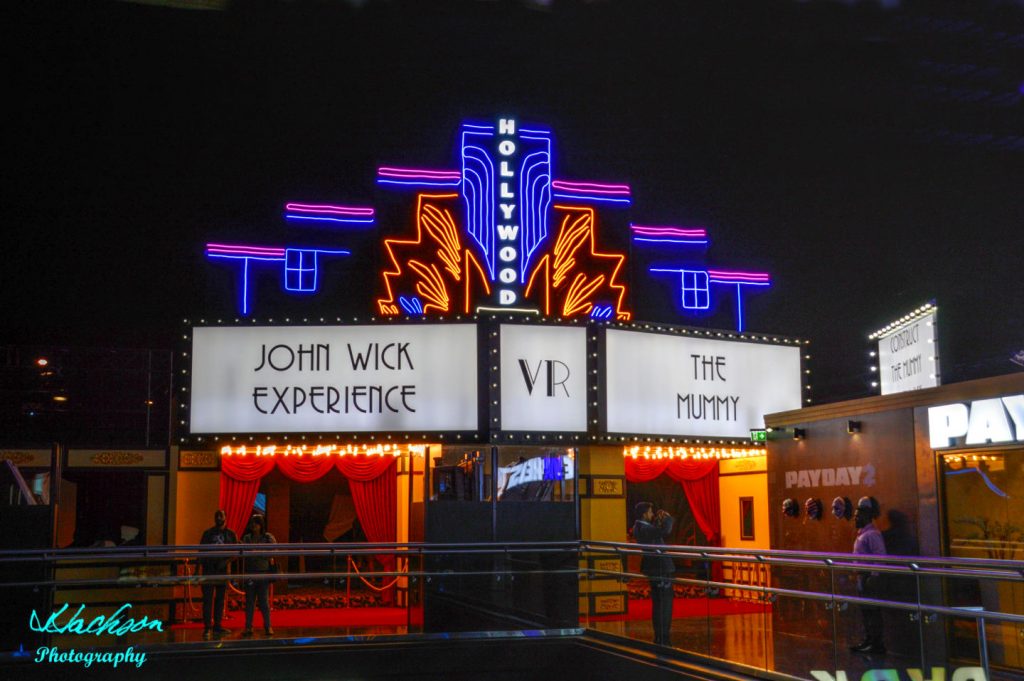 Consistently the Dubai Mall ranks as the most visited building on the planet, attracting over 54 million visitors each year. Opened in November 2008, with about 1000 retailers, making it the world’s second-largest-ever mall opening in retail history. Second? I wonder if anyone lost their job over this debacle! 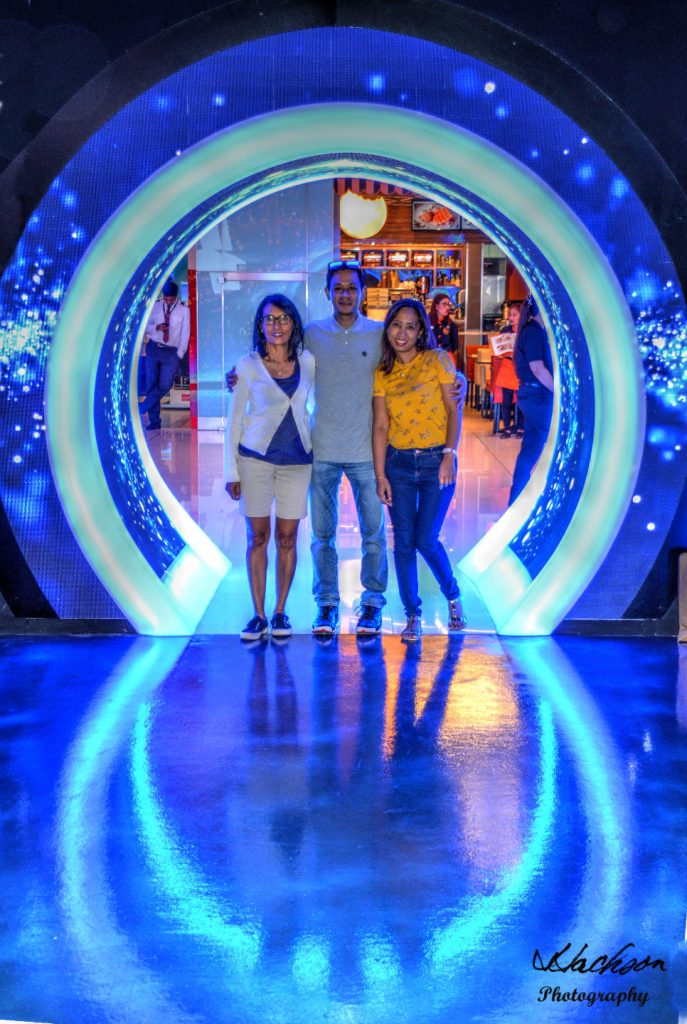 Regardless if they came in second, the most stunning element of the mall and perhaps the finest in any mall is the spectacular waterfall that reaches all four levels of the mall. 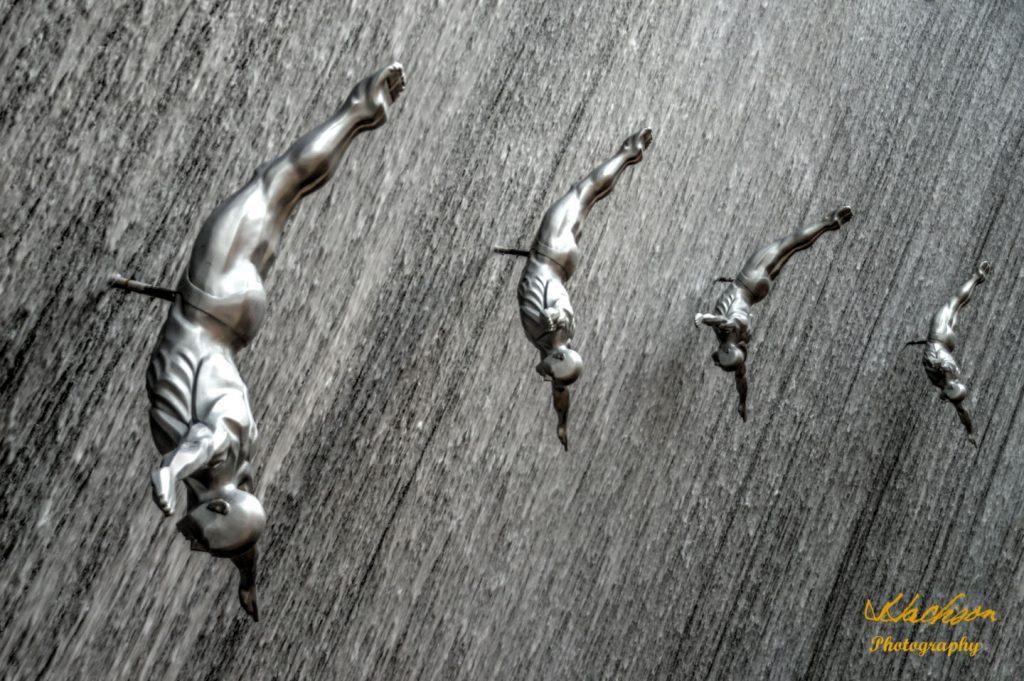 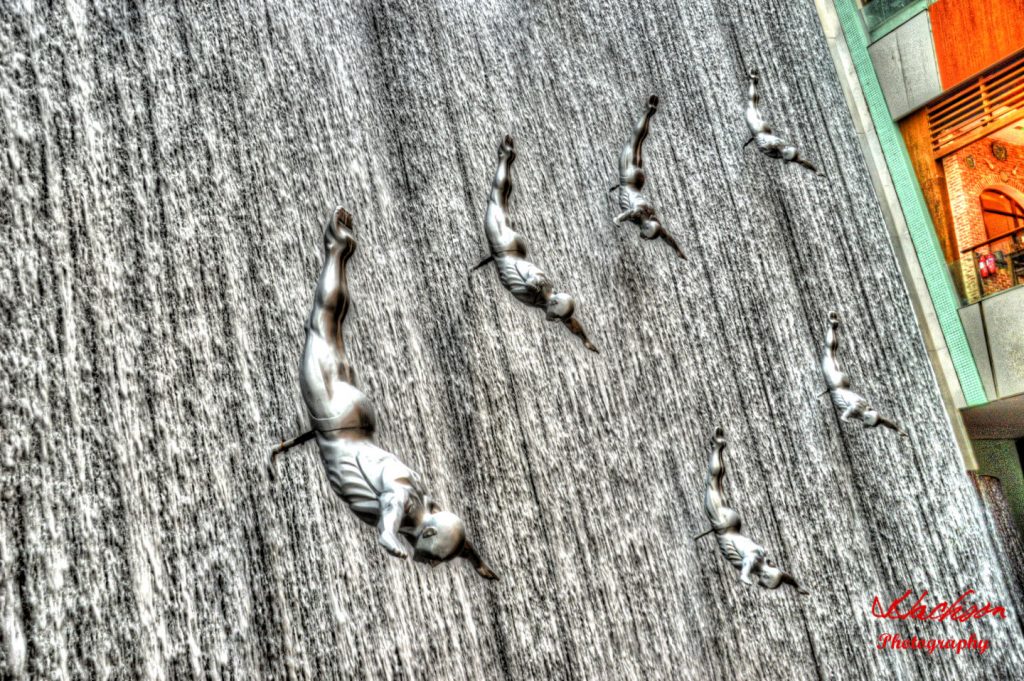 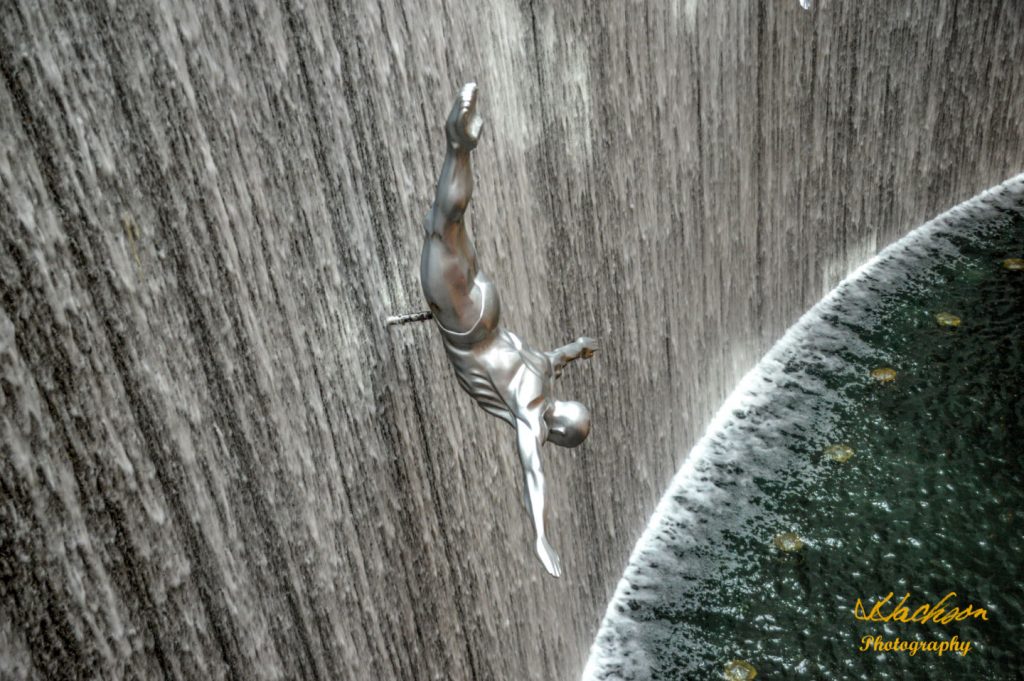 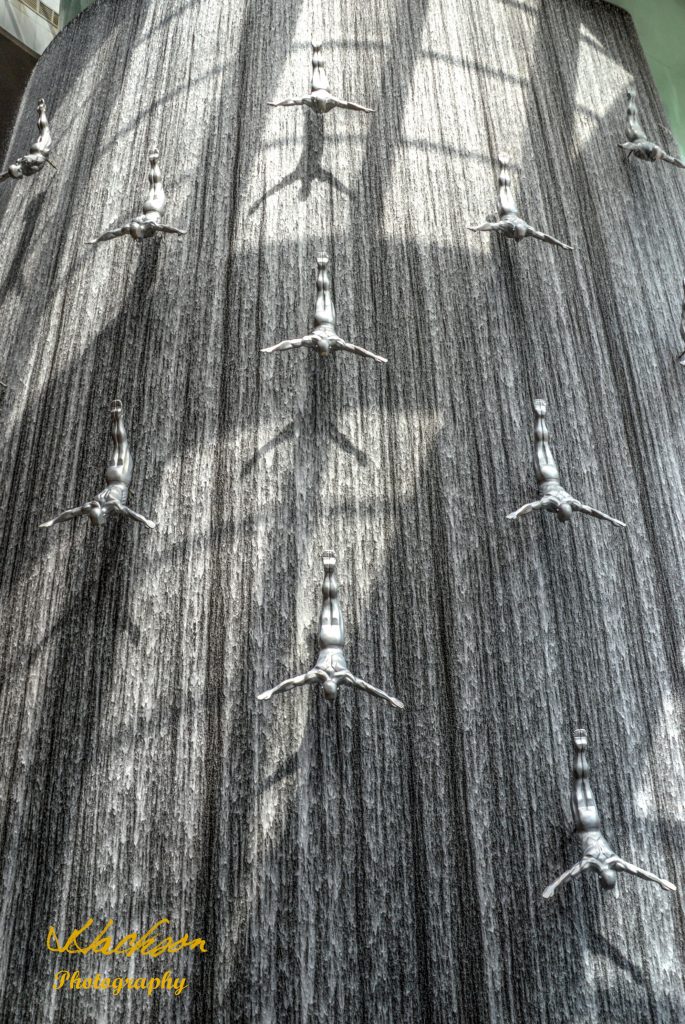 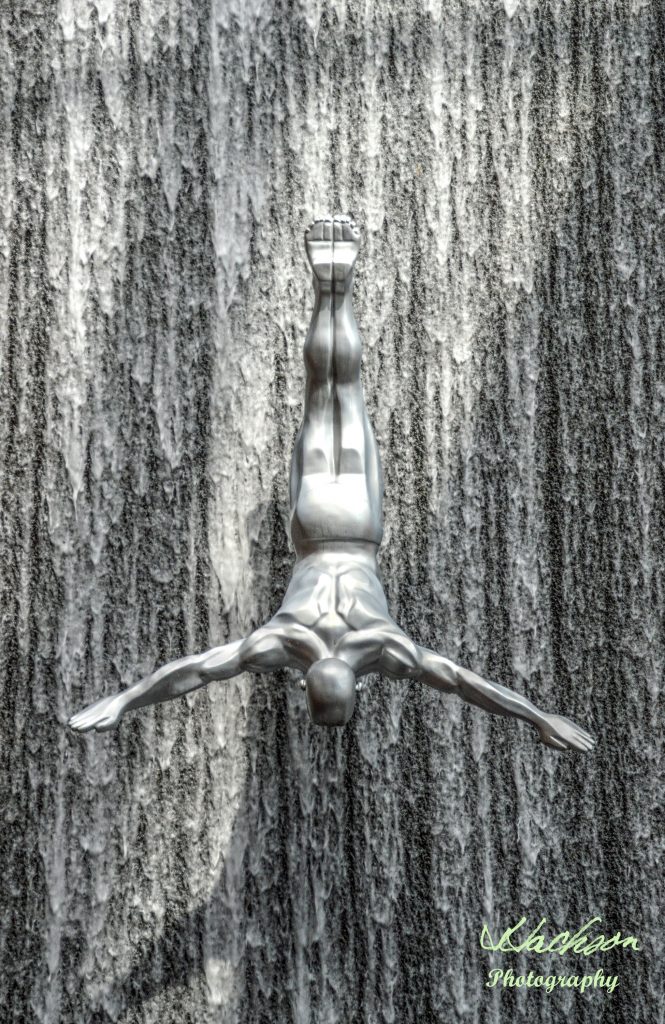 Above, the spectacular waterfall at the Dubai Mall

Installed in 2009, the waterfall was designed by DPA Architects of Singapore and pays homage to the Emirate’s early romantic history of pearl diving. Situated along the flowing waters are sculptures of divers made of specially designed fiberglass material that makes their bodies shimmer against the sparkling, cascading falls. The effect is dramatic and mesmerizing with the hypnotic, cascading flow of the water. 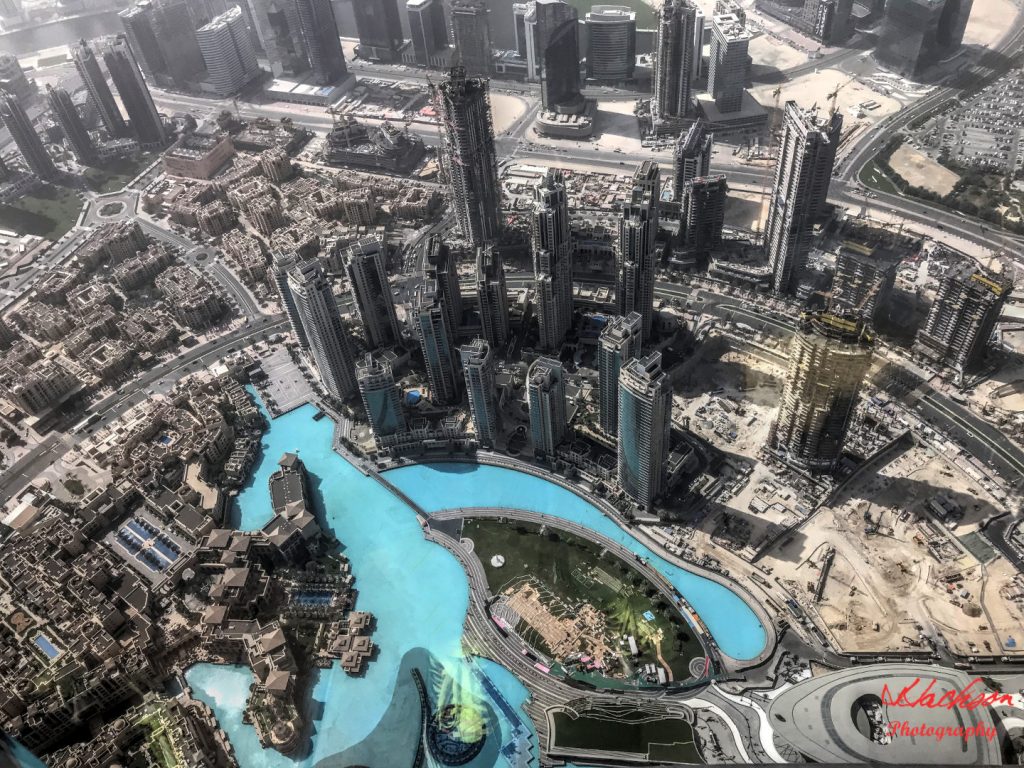 Above, the Dubai Fountain as seen from the 148th floor of the Burj Khalifa

Just outside the mall is the Burj Dubai Lake, which features the Dubai Fountain, a world-class water, light, and music spectacle. It serpentines to over 900 ft (275 meters) in length, which makes this display about 25 percent larger than the Bellagio Fountain in Las Vegas in total area.

The four of us wandered about the mall, stopping for lunch in one of the nice restaurants to enjoy our lunch. My wife and I had somewhat tacky photos taken while we were up in the Burj Khalifa. To add to our unconventional tackiness and overall general amusement, all four of us dressed as sultans and their harem and had numerous photos taken at a studio in the Dubai mall that was disguised as a Bedouin camp. They were expensive, but I bought them all! It was great fun to spend time with people that we really like and quite honestly, having time to spend with our niece and nephew was priceless. 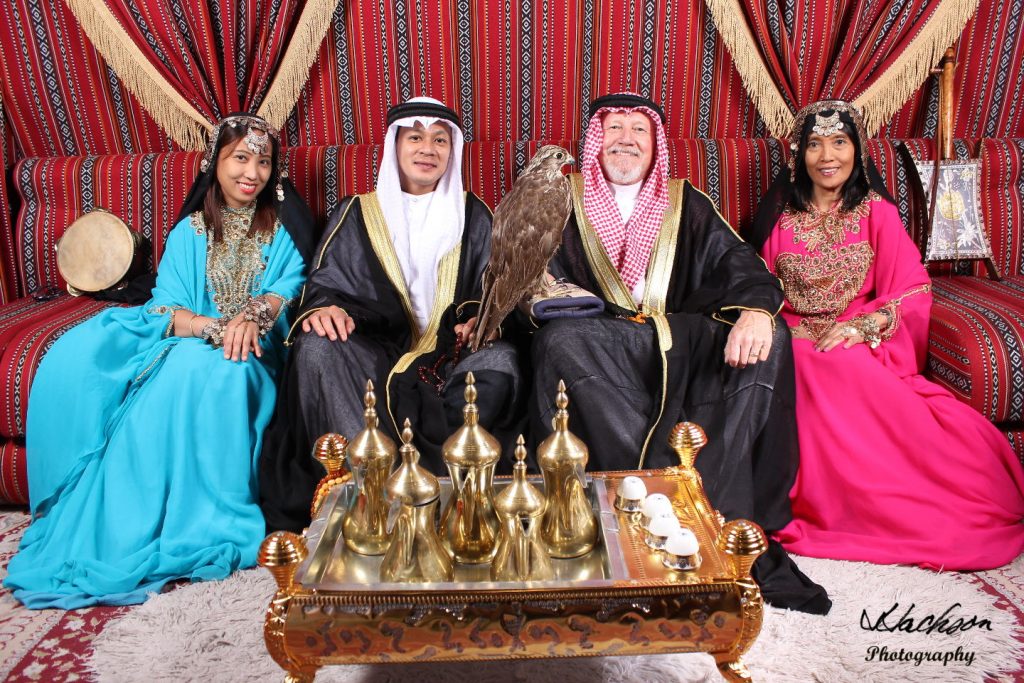 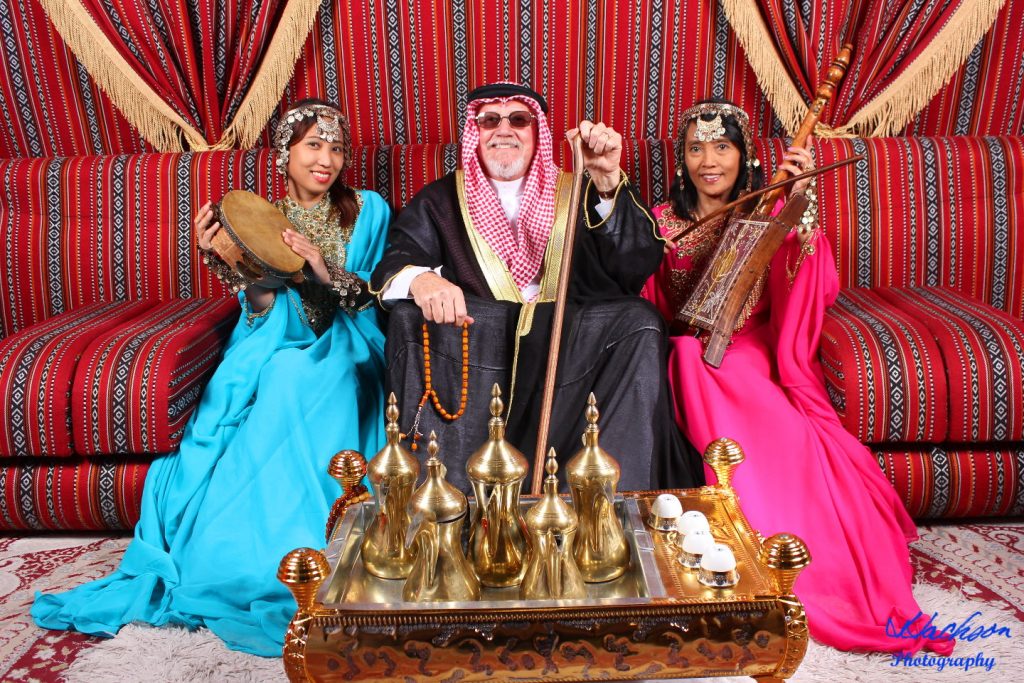 We just could not resist the tacky tourist shot!

Inside the mall, there is so much to do. There is an aquarium inside the mall that rivals any aquarium in the world, even the one in Monterey, California. The one in the Dubai Mall is free! As I mentioned, I really do not like malls, but I could spend hours in this one as there is enough to do to keep me occupied and not have to do any shopping! The aquarium is filled with a vast amount of fish and many, many species of sharks. I could have spent many hours just watching them! 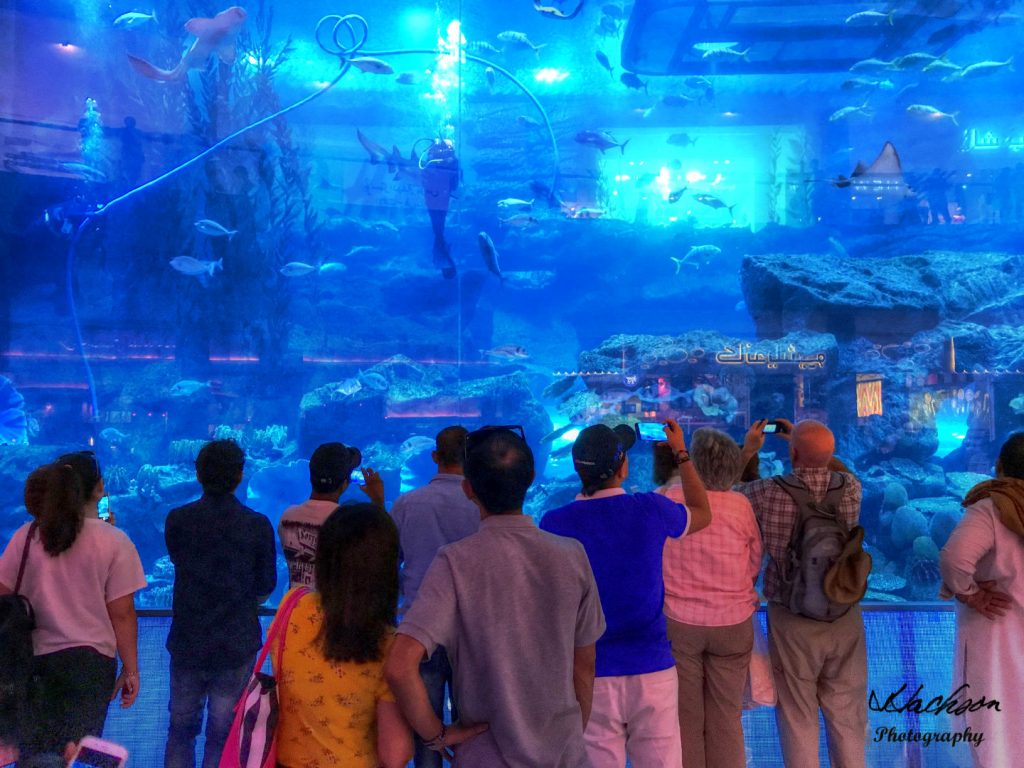 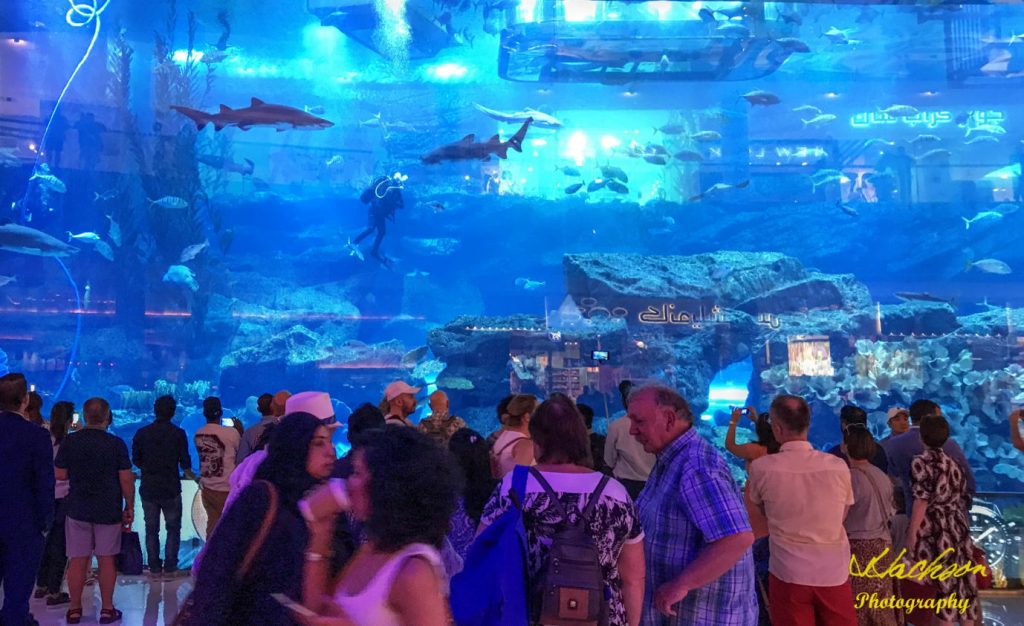 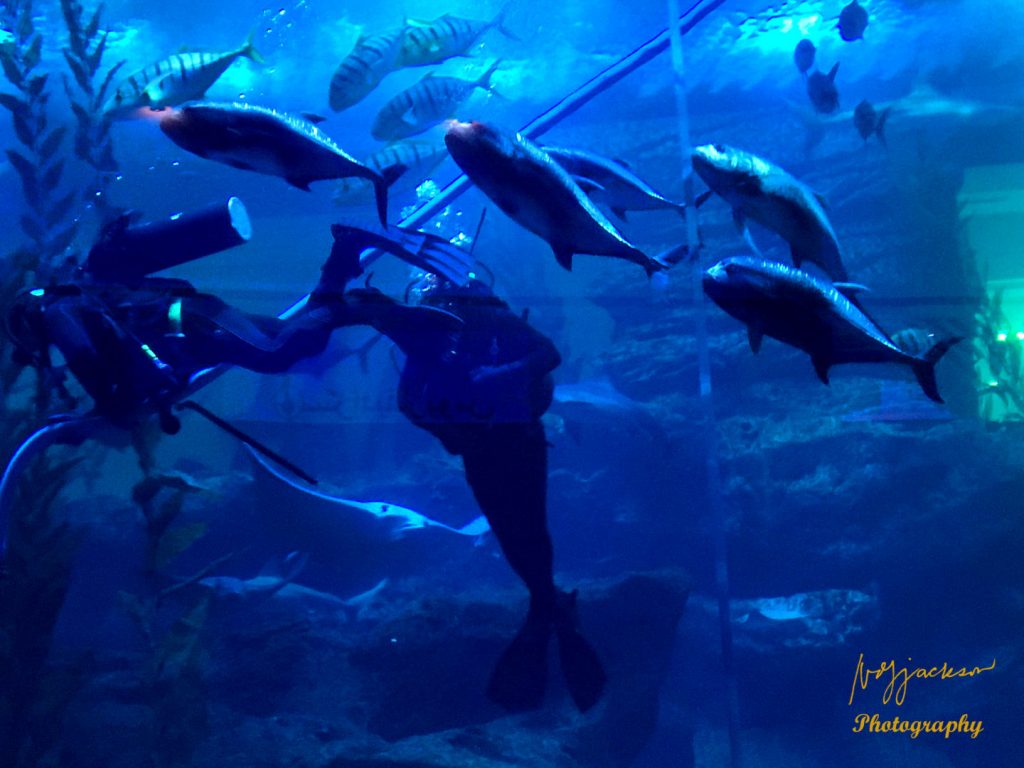 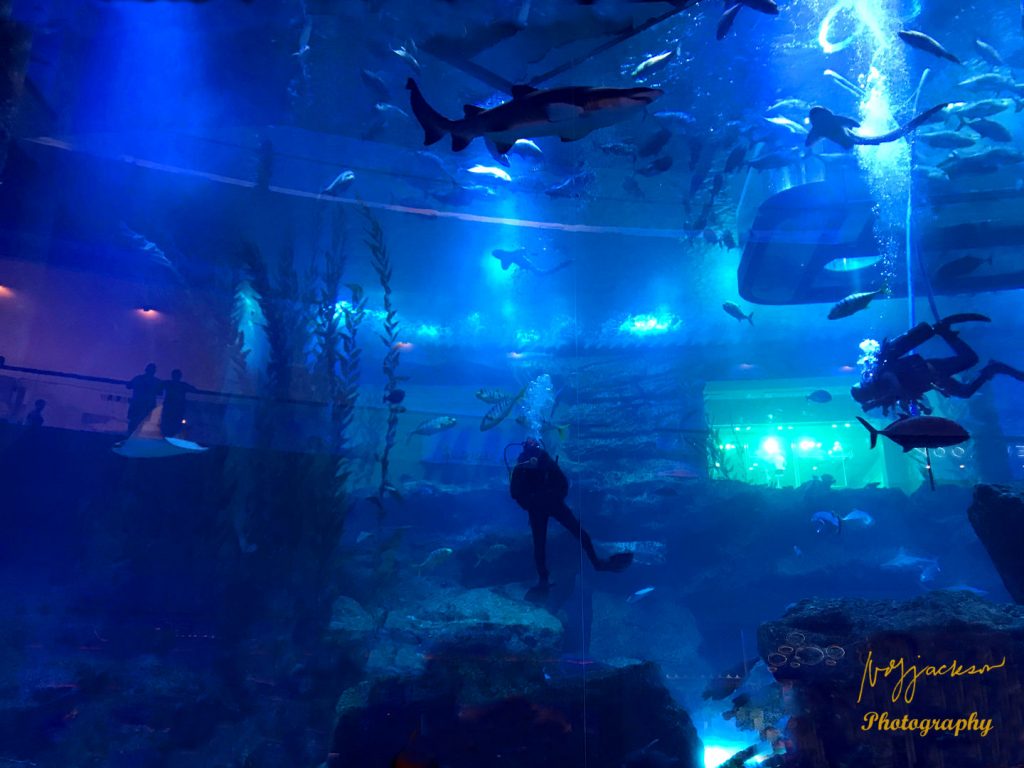 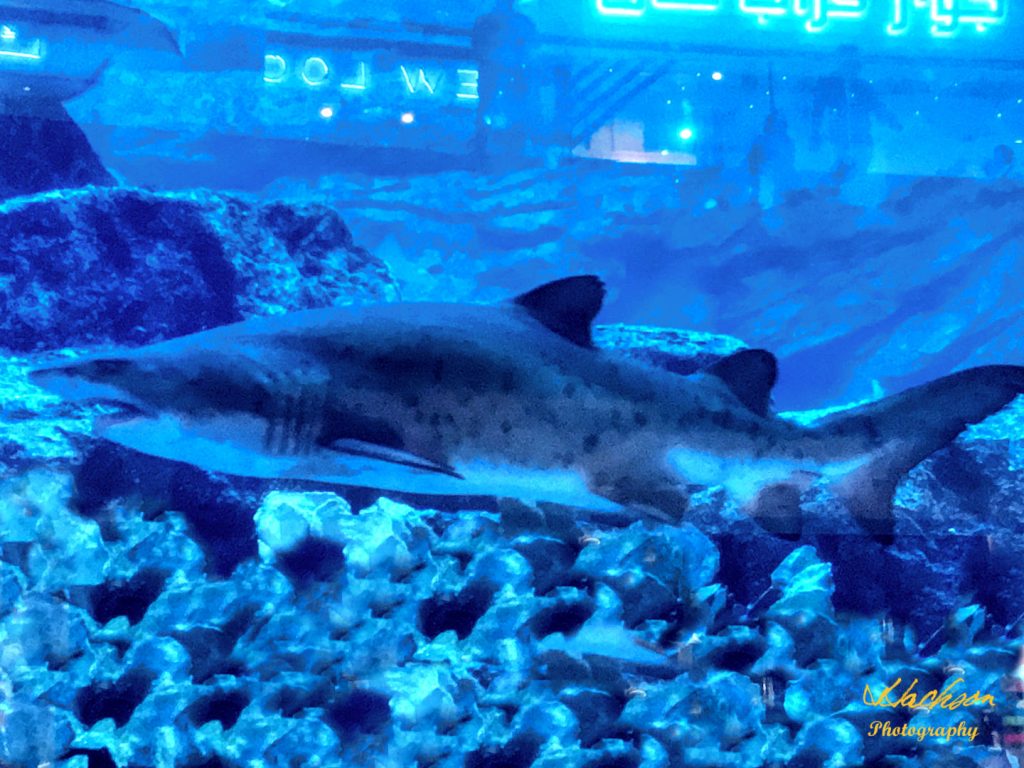 There is even a real and dinosaur skeleton inside the Dubai Mall. The dinosaur fossil, which is a Diplodocus, was a vegetarian that lived over 150 million years ago. The skeleton of the Diplodocus longus is about 90 percent complete which makes it one of the rarest in the world of paleontology. It was purchased for “several million dollars.” 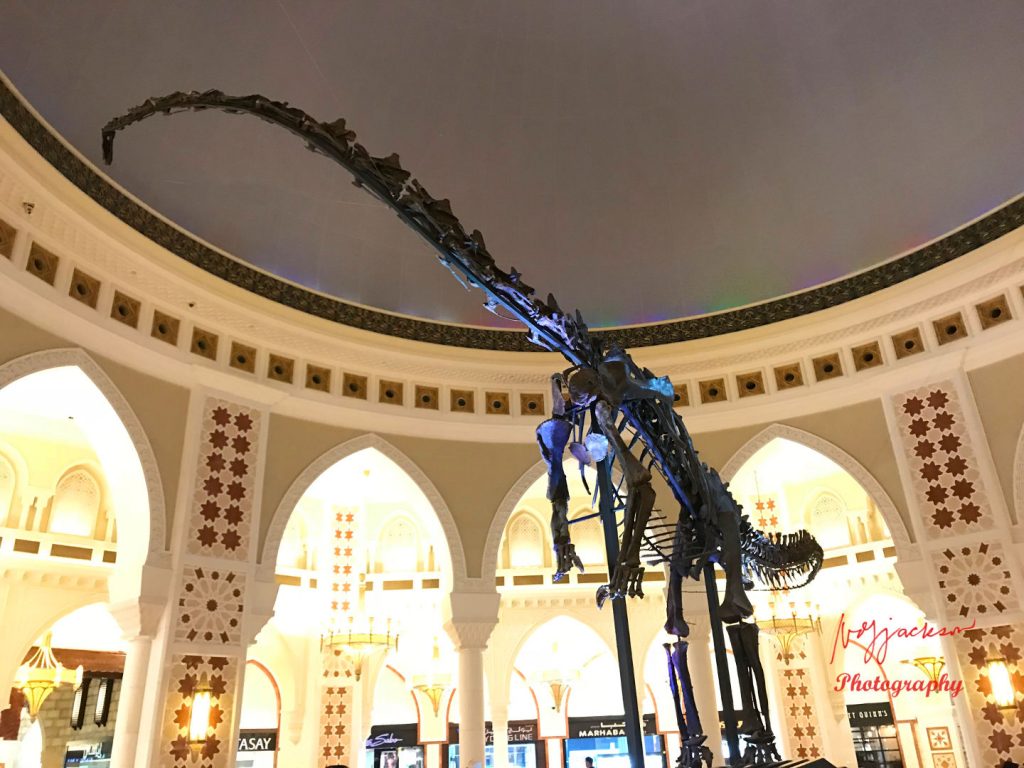 The Diplodocus skeleton in the Dubai Mall

The massive dinosaur was discovered in the Dana Quarry in Wyoming, USA where it was excavated by German Paleontologist Raimund Albersdoerfer in 2008. It took five years to excavate and prepare the bones. In an effort to give the fossil dinosaur a name (and of course to drum up some publicity) the Dubai Mall held a name-the-dinosaur contest. They selected the name DubaiDino and the 155-million-year-old dinosaur fossil stands proudly in the Dubai Mall. When Albersdoerfer was asked why he chose a mall to display the rare find, he said that no museum in the world would garner the high number of visitors as the Dubai Mall. And there is no charge to view it! 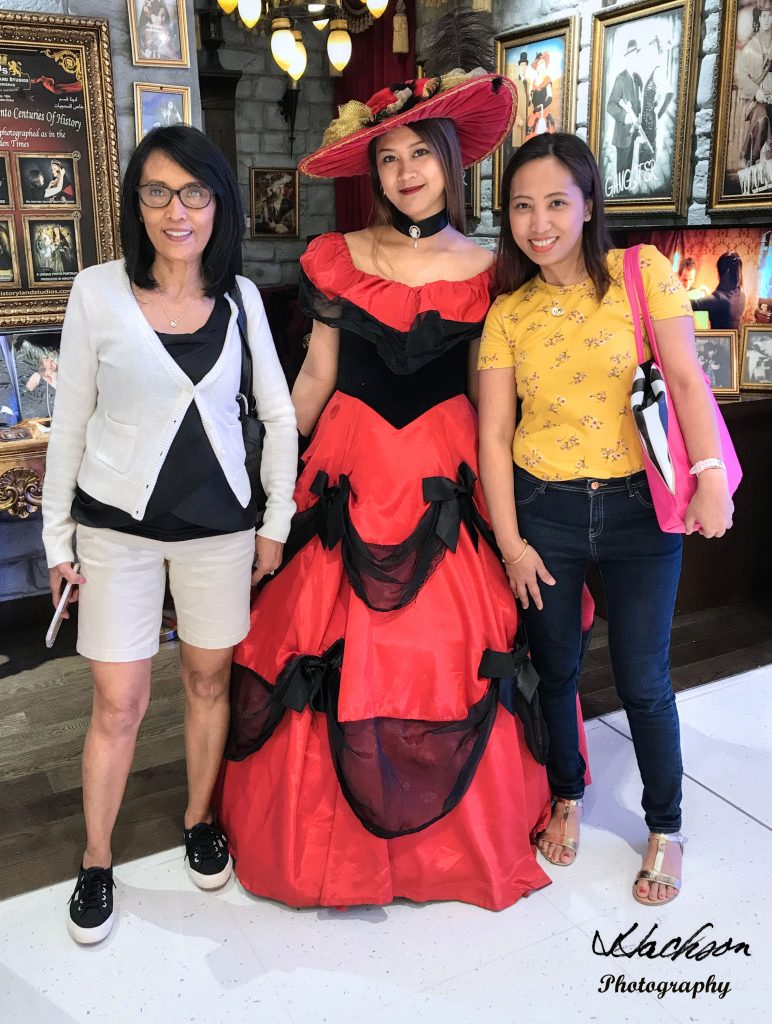 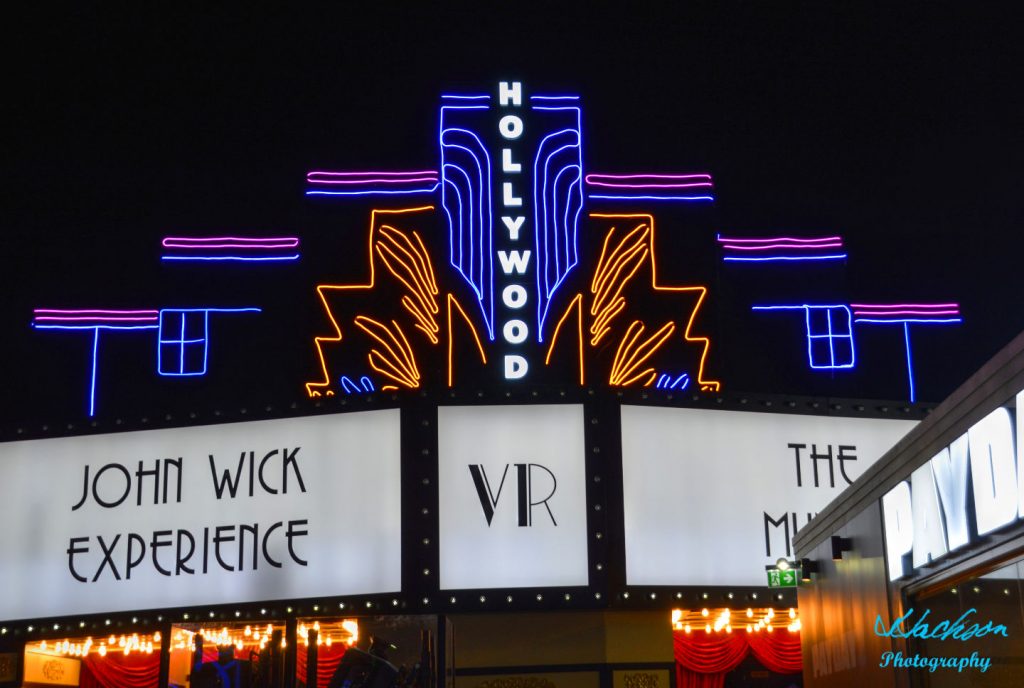 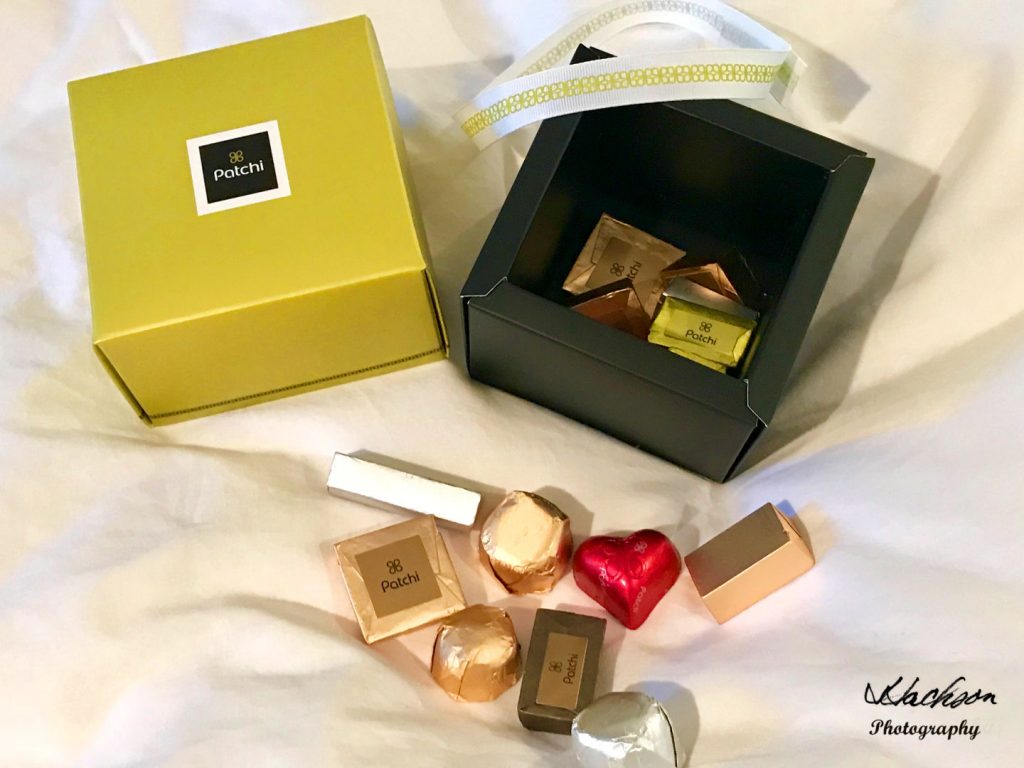 Above, a Western-themed photo op, a world of virtual reality and perhaps, the finest chocolate in the world.

For our afternoon break, we had a snack of tea and coffee and the best buns ever! But sadly, this trip to Dubai and the United Arab Emirates would have to end today as tomorrow we head to Turkey and then on to Greece. We caught a taxi back to our hotel where the four of us enjoyed a meal before saying our good-byes. 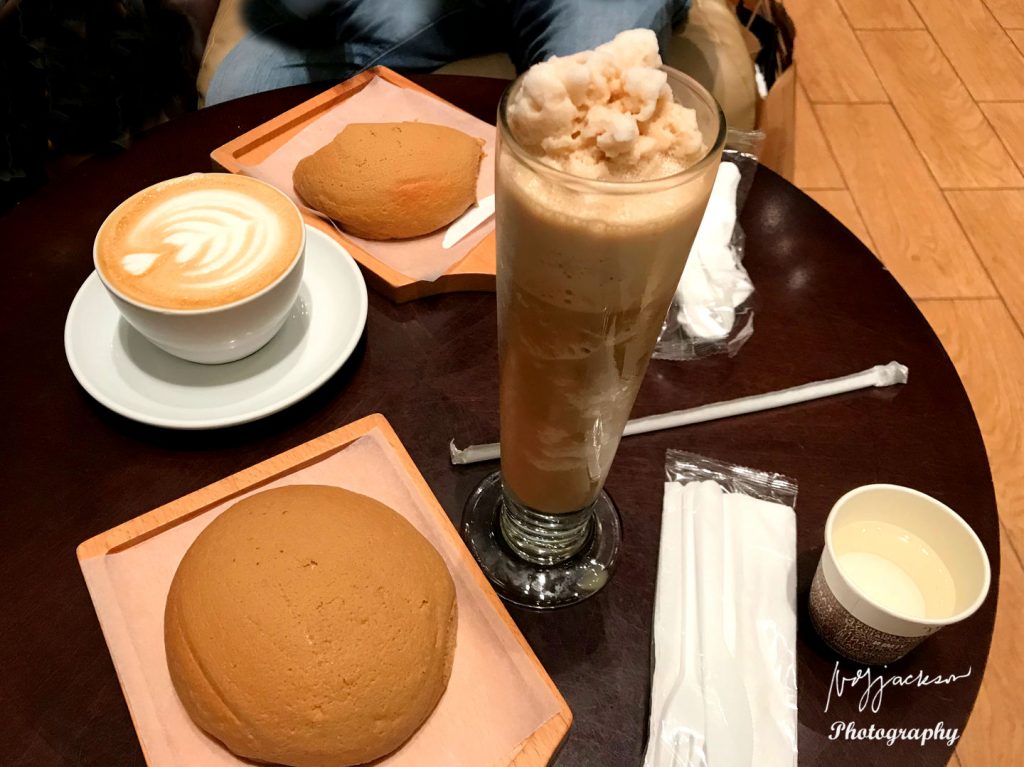 Talk about a place where you can fulfill several items on your bucket list!  The nearby Burj Khalifa, the Burj Dubai Lake and Fountain, the massive and complete dinosaur skeleton, the incredible aquarium and what has been awarded as being the finest chocolate in the world!  This is one place where you can place many drops in the bucket!