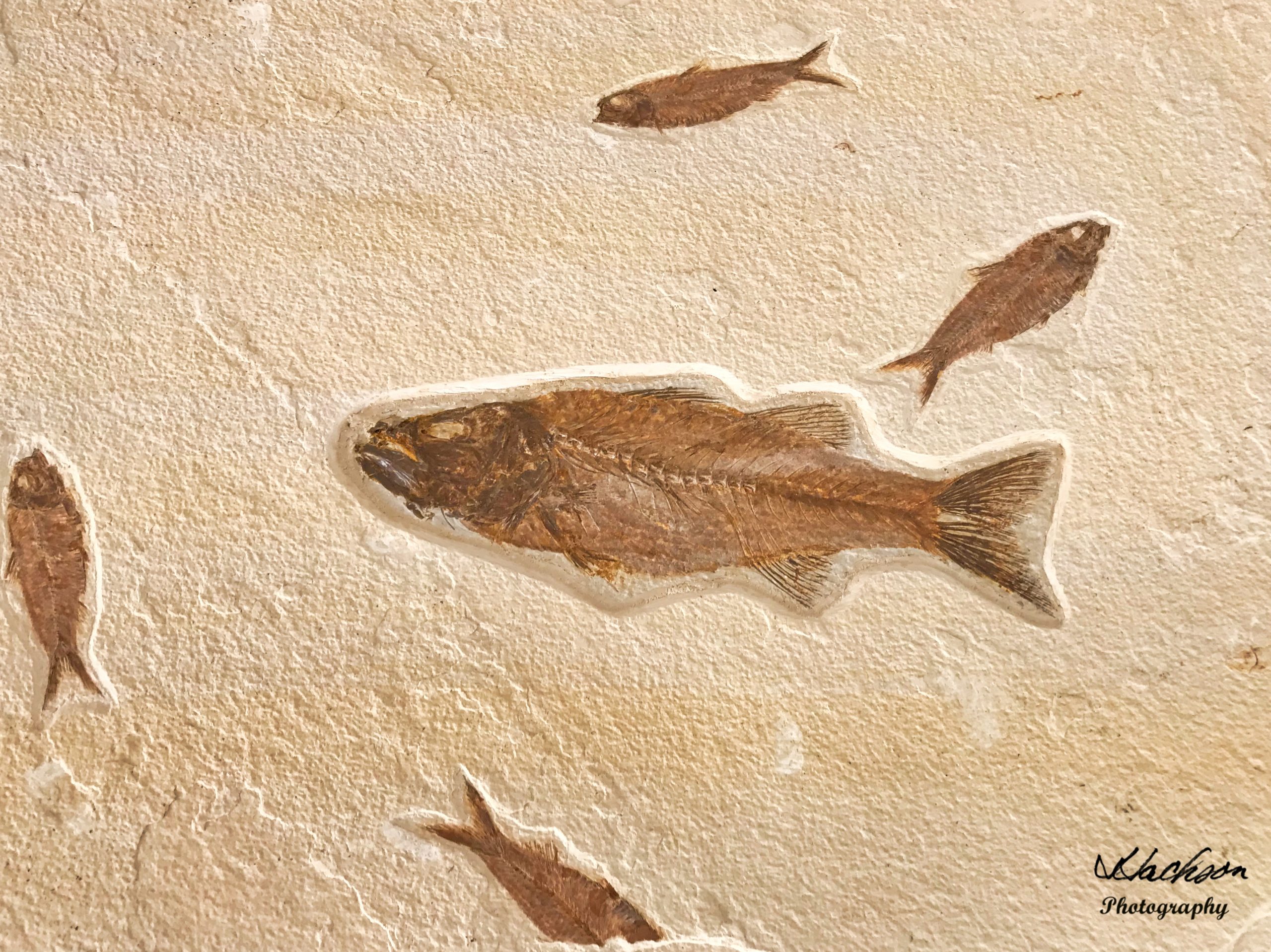 Want to take a trip back 50 million years ago to a land where ancient animals roamed the middle of America? Want to see firsthand where fish swam in seas that were bombarded by volcanic ash? Want to see the fossil remains of creatures that lived in these dried-out seas? Now you can at American Fossil in Wyoming. 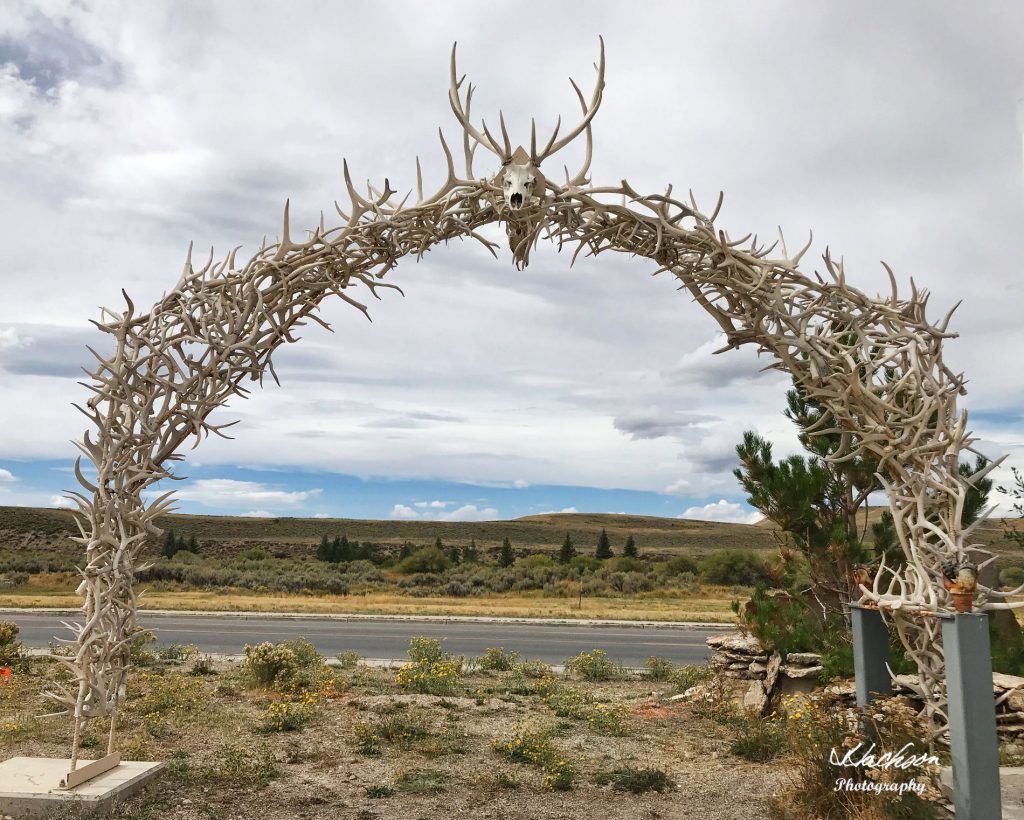 At this quarry you pay a very small fee, and you get to keep everything that you find. Check their website for open dates, fee schedules and detailed directions to the site http://www.fishdig.com/. Located just outside Kemmerer Wyoming, it is only 45 minutes from Bear Lake and Evanston, 2 hours from Park City, Yellowstone National Park and Salt Lake City. 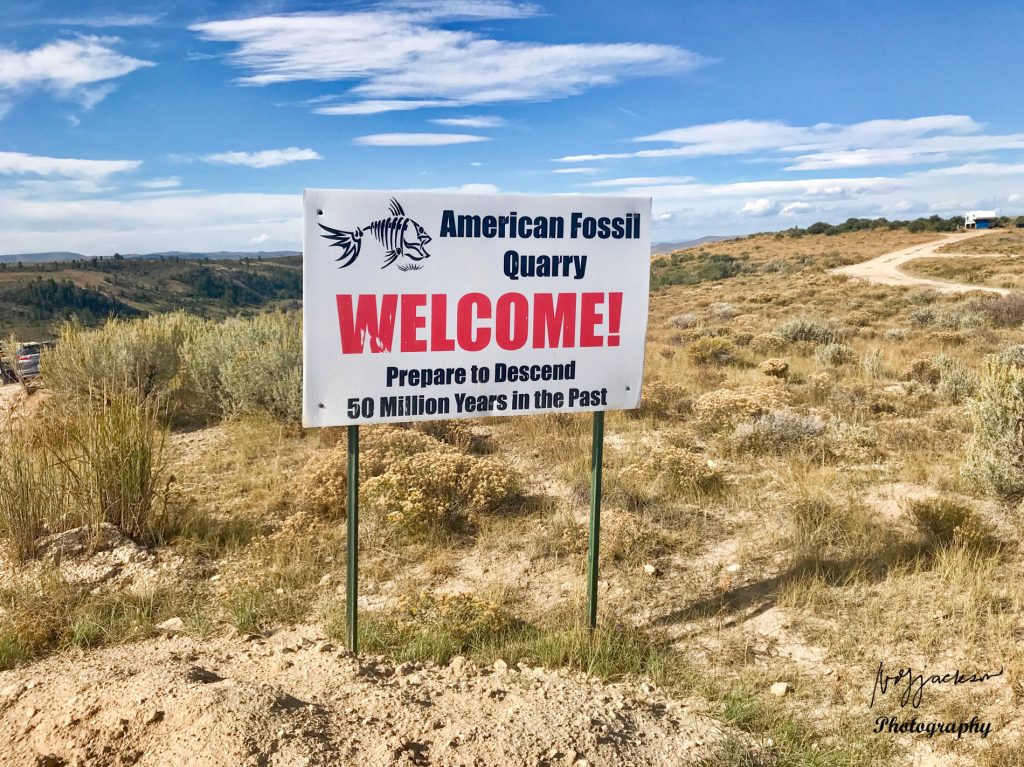 The drive from our starting point at Salt Lake City, Utah offered many splendid views and amazing scenery. The roads are great until you pass Kemmerer, where the road is unpaved but still not too bad. You do not need a four-wheel drive vehicle, just take care where you are driving. The scenery is beautiful, keep your eyes on the road so you don’t wander off into the scrub brush! 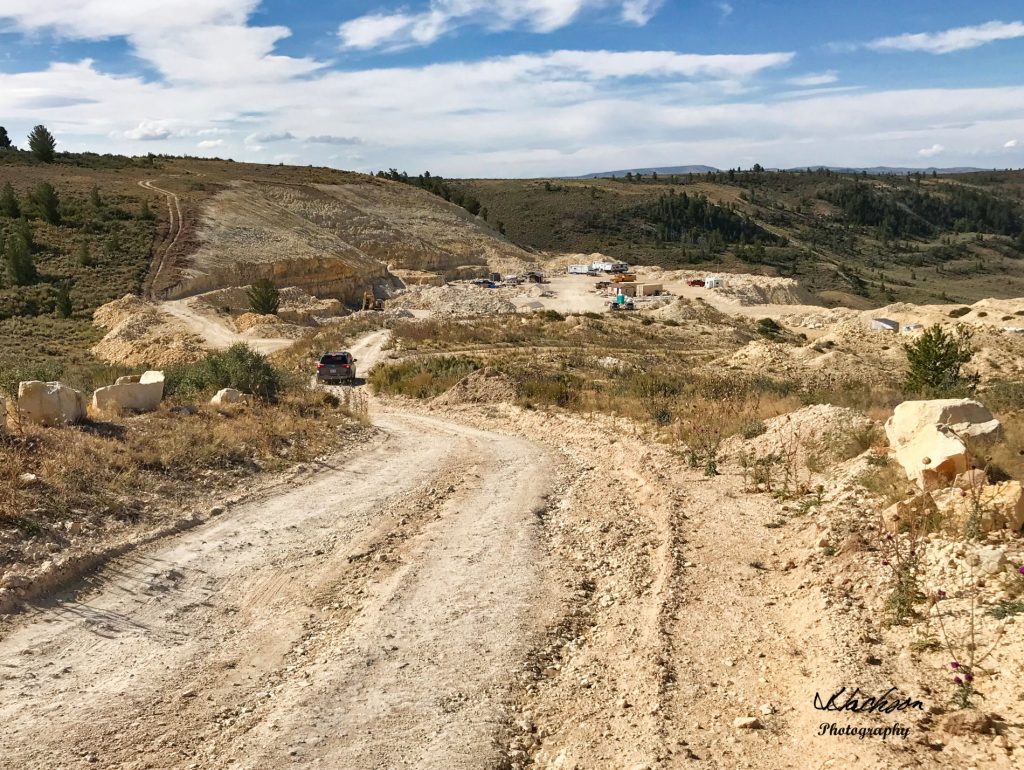 The road getting to American Fossil is easy to follow. There are signs so keep an eye out for them at crossroads, which are not too many. As you descend, you can almost feel what it was like in this area some 50 million years ago. Look around and try to imagine what this place was like back then. Remember, it was under the sea and surrounded by active volcanos. 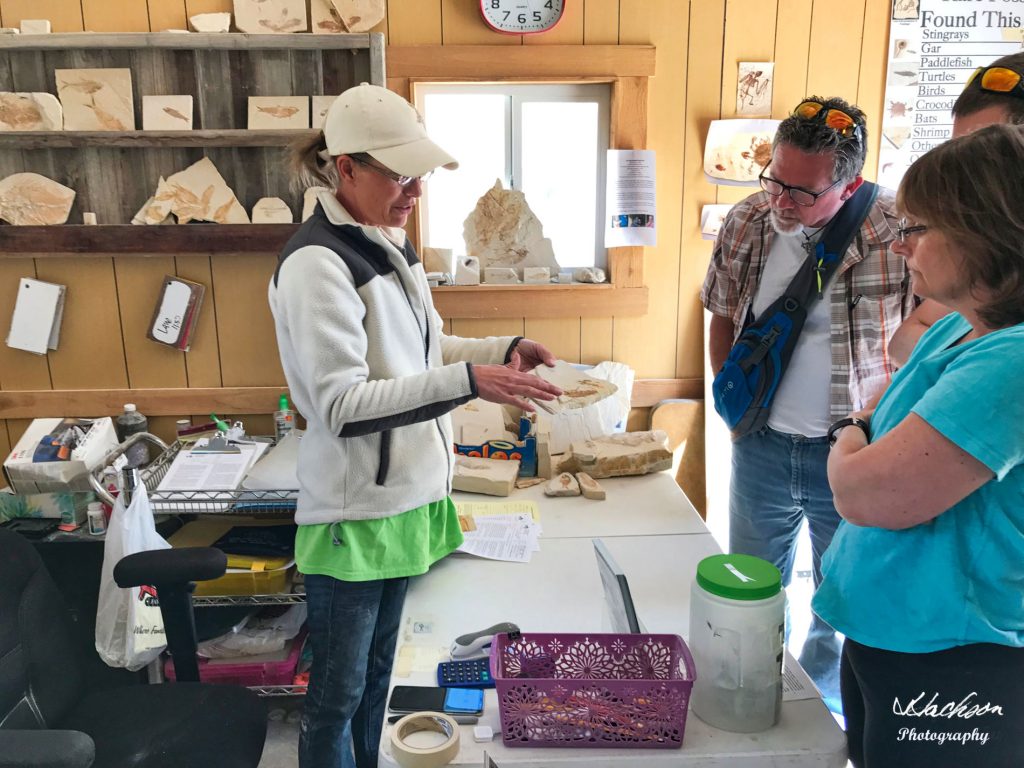 Your first stop is at the office of American Fossil where you check in, get a brief indoctrination and safety tips as well as your tools. American Fossil provides a high-grade rock hammer, a specially designed chisel, plus a shelf to put your finds on and a wheelbarrow to carry them. In addition, they have several rock saws where you can cut and trim your fossils. 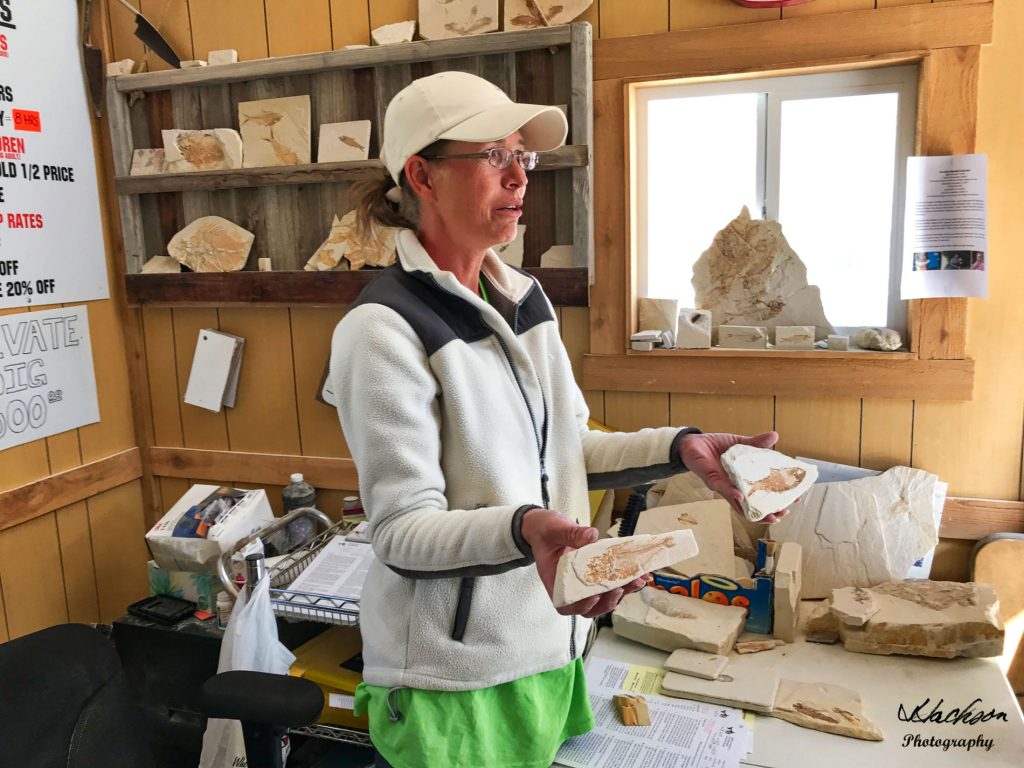 Don’t break the large fossils in an attempt to reduce their size. Leave them large and let the rock saw do the job for you. They discourage you from using your rock hammer to trim the fossils, which typically damages them. Inside the office you can see what you are about to hunt for. 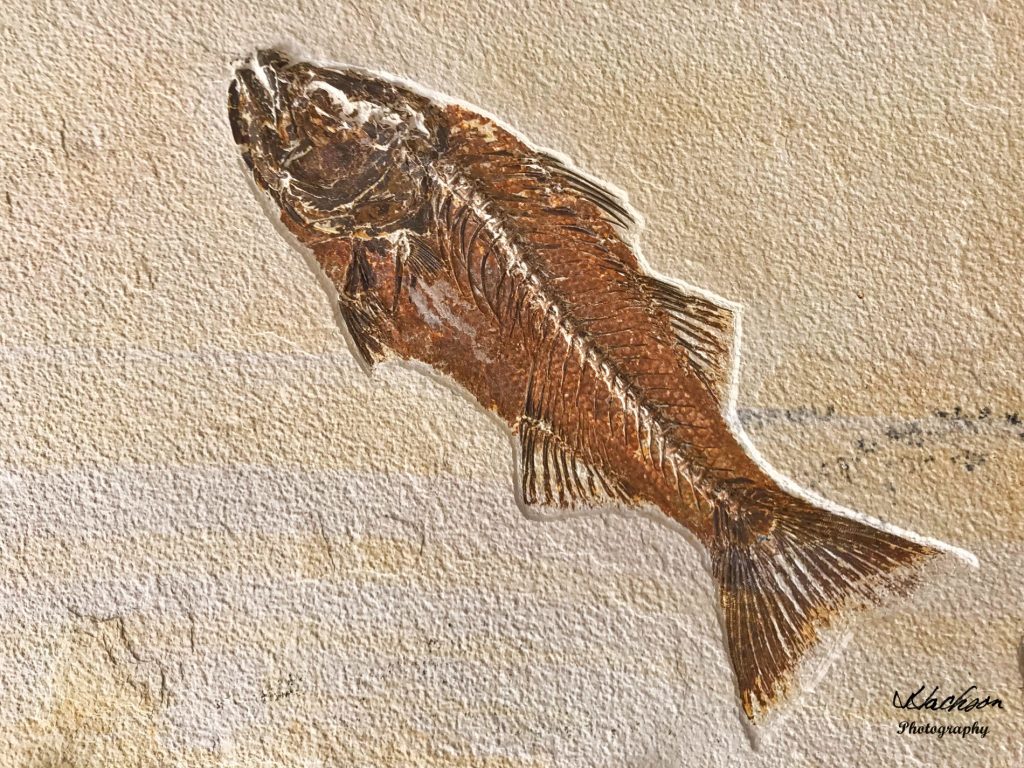 How’s that for a beautiful looking fish fossil? You won’t get skunked on this fishing trip!  And fish are not the only fossil that you can find here.  American Fossil is only one of two locations in the world where a complete 3-Toed Horse has been found. You may get lucky and find a stingray, shrimp, gar, paddlefish, pike, turtles, crocodiles, bats, birds, rhinos, camels, and even primates! 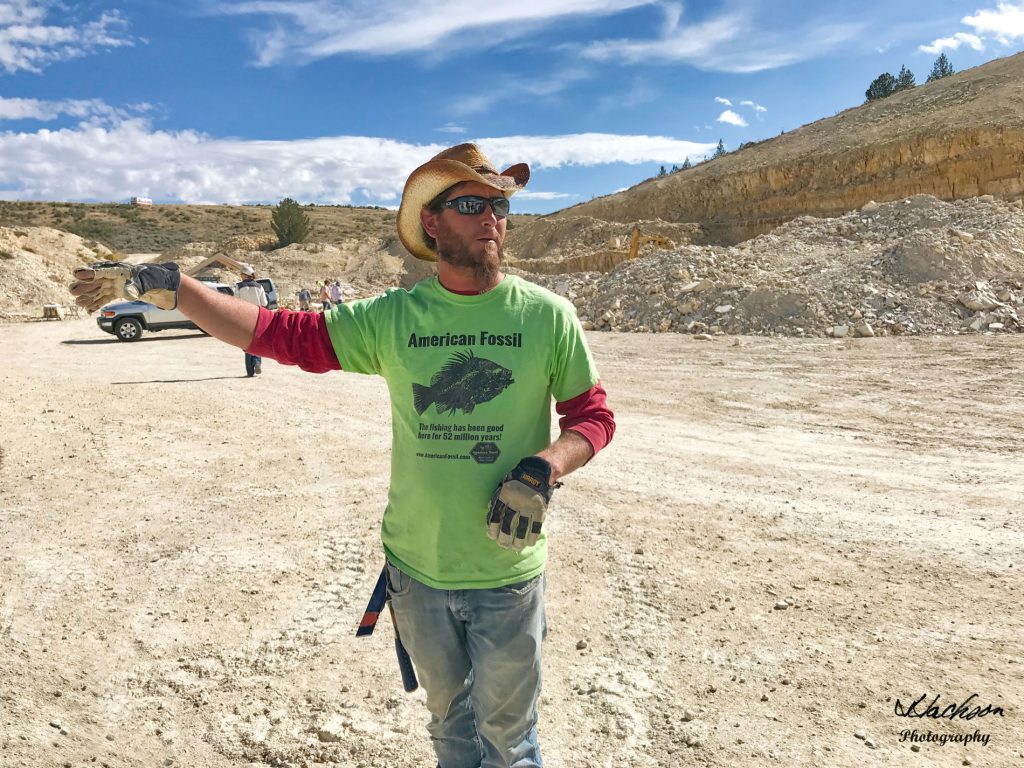 At American Fossil they don’t just make you pay and leave you find your way around. They do it right! Our guide above took good care of us and led us to a spot where we scored! Let me go back a few hours as we drove toward Kemmerer. As we drove, I told my wife that I would feel lucky if we just dug up one small fish fossil. We had paid for an hours dig and within a few minutes after our guide turned us loose, we had several amazing fish fossils!

The above photo should give you an idea of where you will be digging for fossils. The hill just off to the right contains layers and layers of soft material that were deposited over time by volcanic action. With each eruption millions of fish and other animals were buried in the sediment. 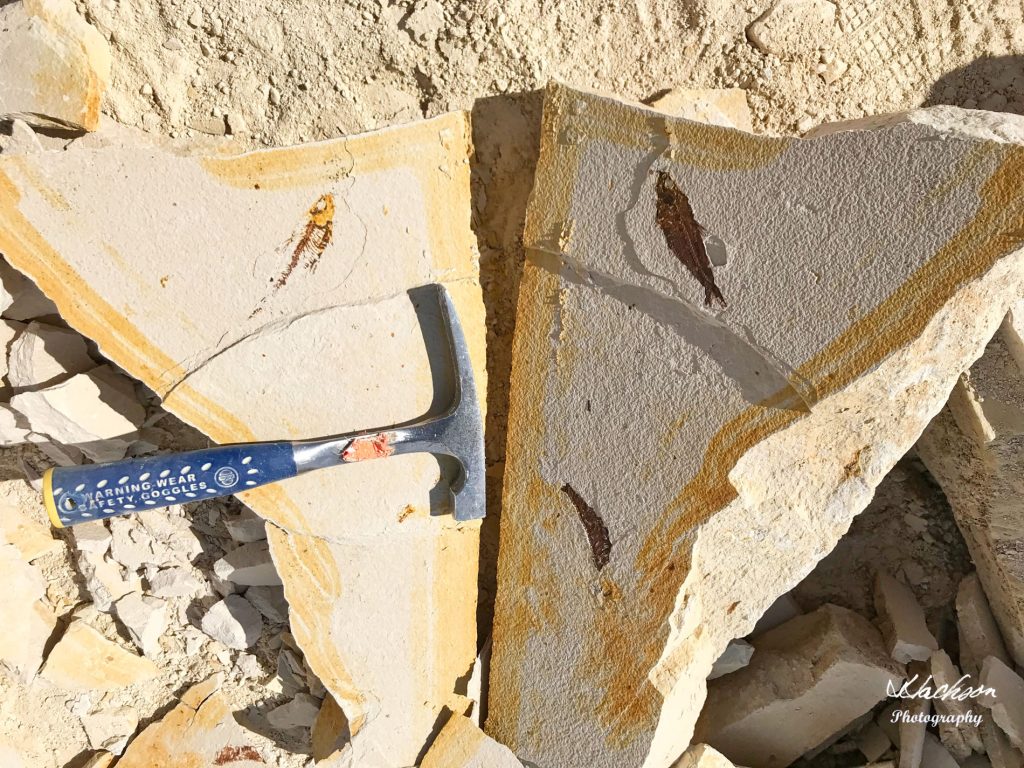 Our first piece was to double fossil which also had a imprint on the other half that we split open. The material is very soft and very easy to split open to find the fossils inside. However, being this soft, they are also easy to damage if you are too eager to see what’s inside. Don’t worry, they have been buried for millions of years and have absorbed moisture. Once exposed, they begin to dry out. 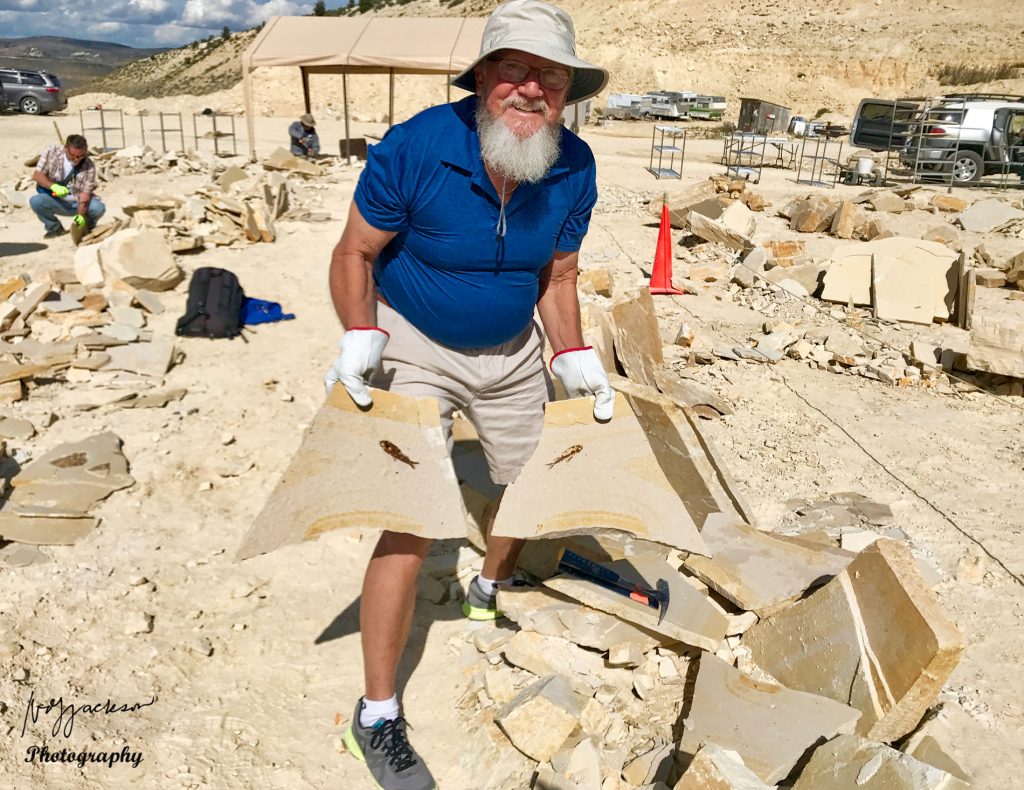 Here is another photo that shows what we found within just a few minutes of digging and cracking open the slabs of material. This is another typical fossil that shows a mirror image. You can see the light-colored yellow bands on the rock which is from moisture trying to get inside the material. 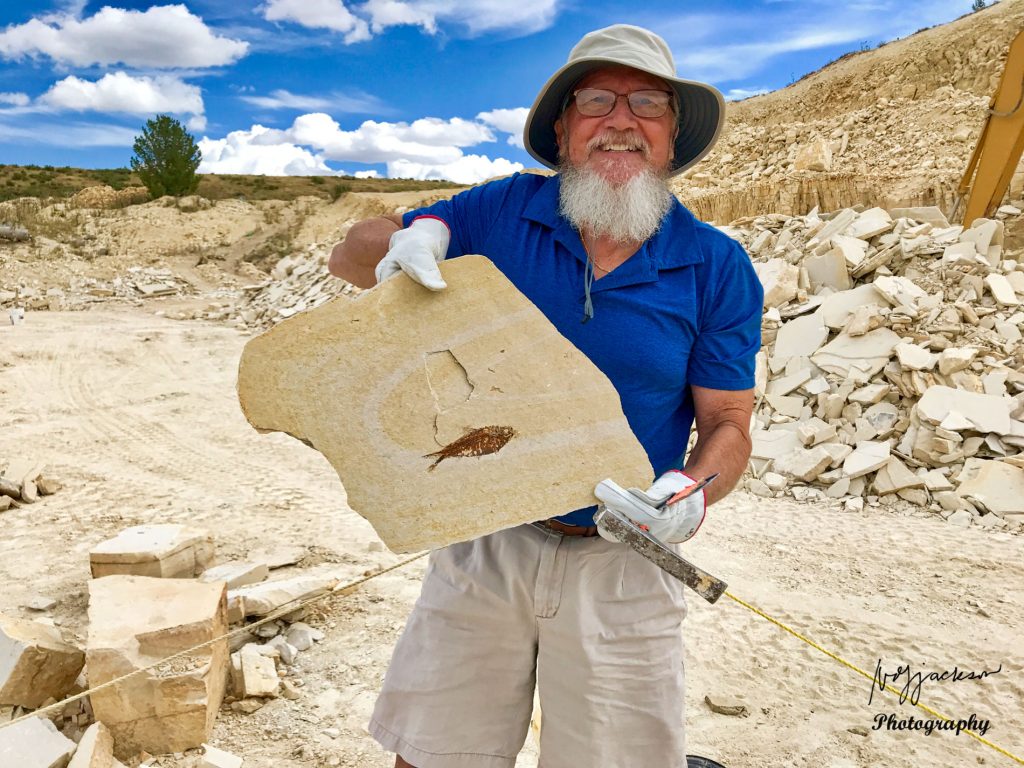 How is that for a great looking specimen? The fossil I mean! No old people jokes please! 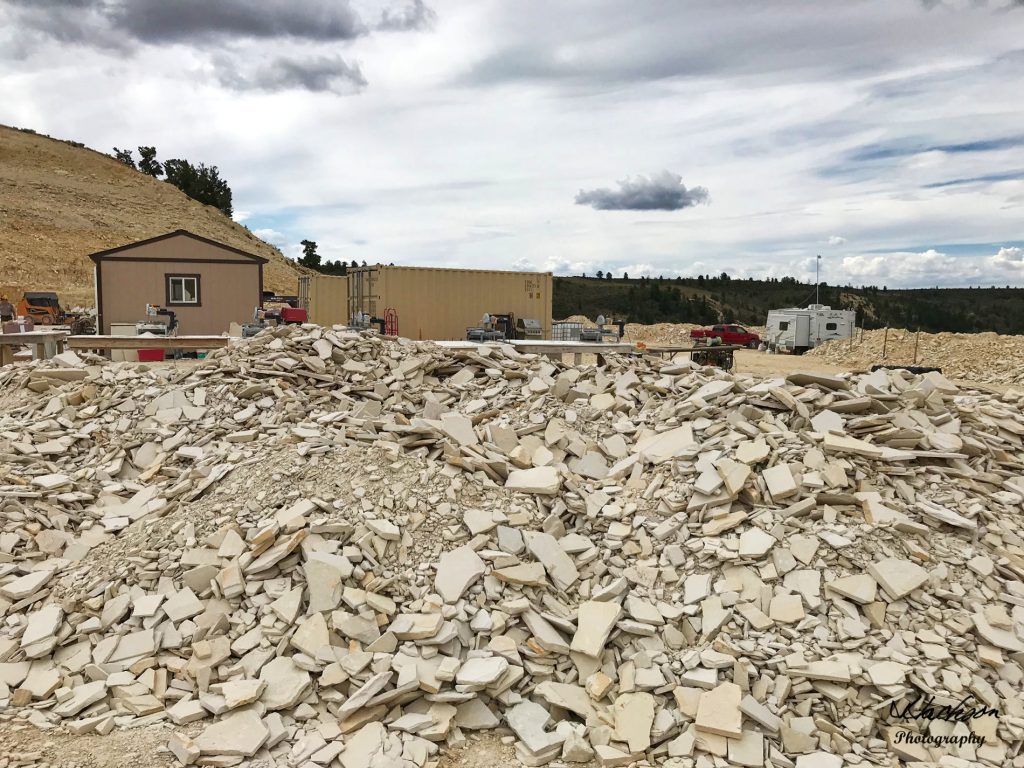 There is literally a fossil inside every piece that you break open. Some are very tiny and there is a lot of petrified fish poop. What did you expect? There were a lot of fish here! 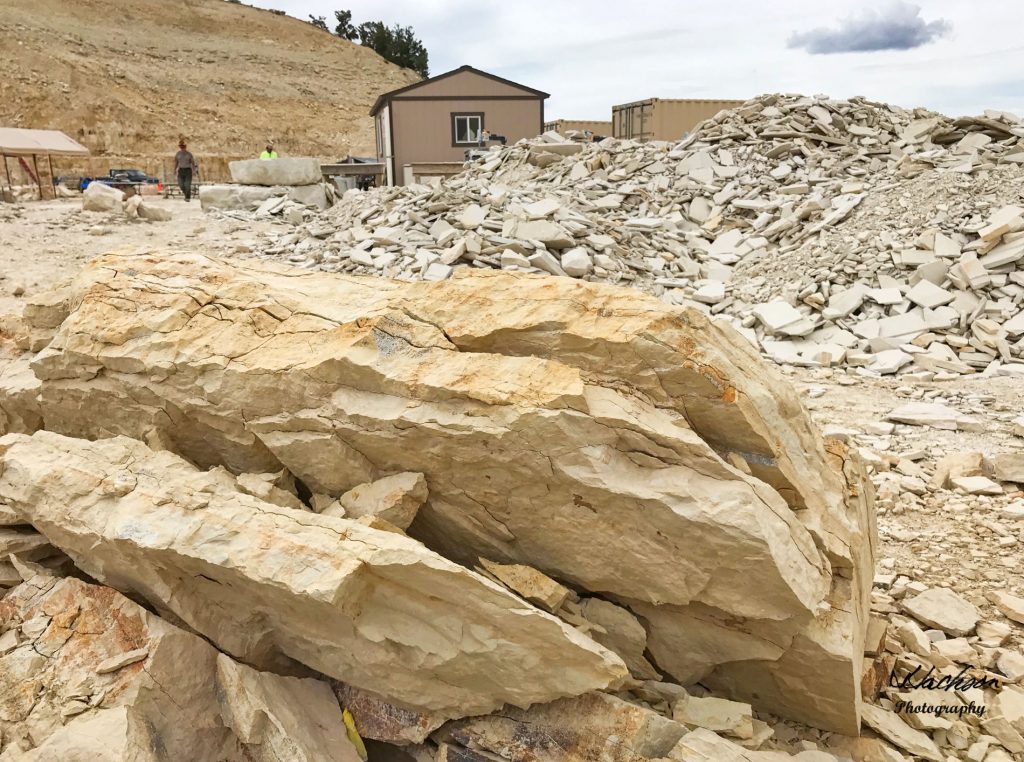 The above rock was just too big to tackle but it is a sure bet that it has something cool inside of it! 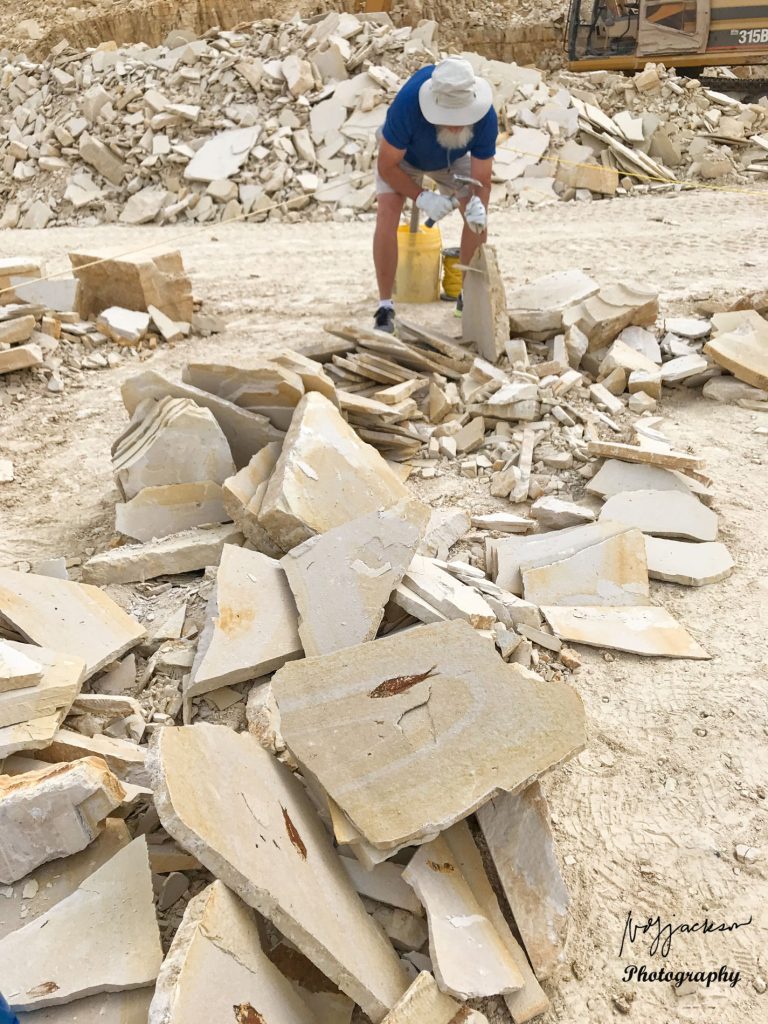 Above and below, our finds after an hour of digging, chiseling and sorting. We found much more than we ever expected and then can the task of hauling our loot from the shelves to the rock saws and then to our car. A word of advice: Since we didn’t really expect to find much, we hadn’t bothered to bring something to wrap, store and transport our amazing fossils. Bring a few cardboard boxes and cloth or newspaper to wrap your fossils. We continued our trip through Utah for a few more days and I was always afraid that they would break or get damaged by rubbing against each other. We had some blankets and extra towels and newspapers, so they all survived. 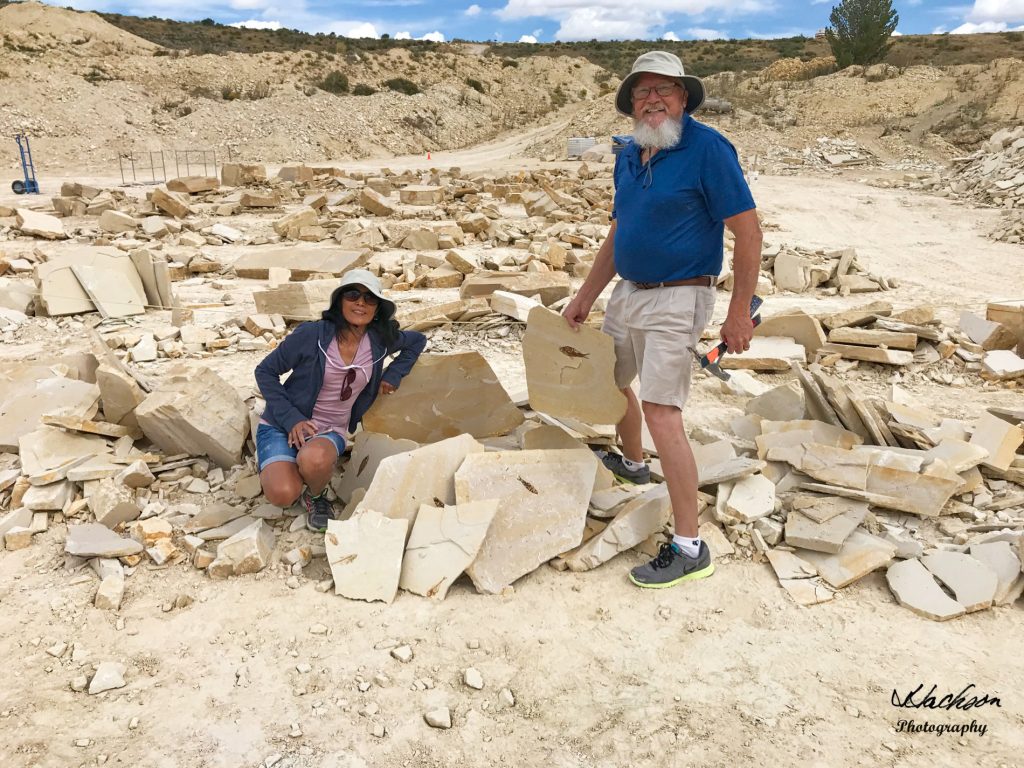 Not a bad haul! Now comes the time to take our fossils to the rock saws where we cut them down to more manageable sizes. 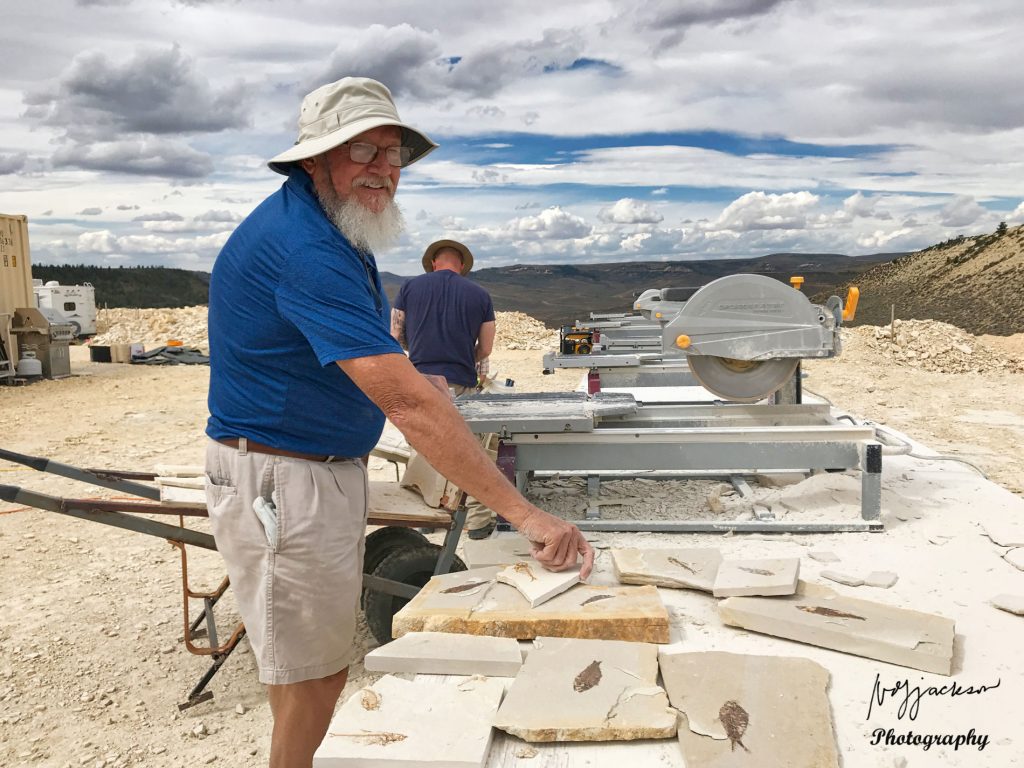 American Fossil has plenty of high-grade rock saws that cut through the fossil matrix rock like butter. Don’t wear gloves when you use the saws! Make sure that you bring a dust mask, which I forgot! 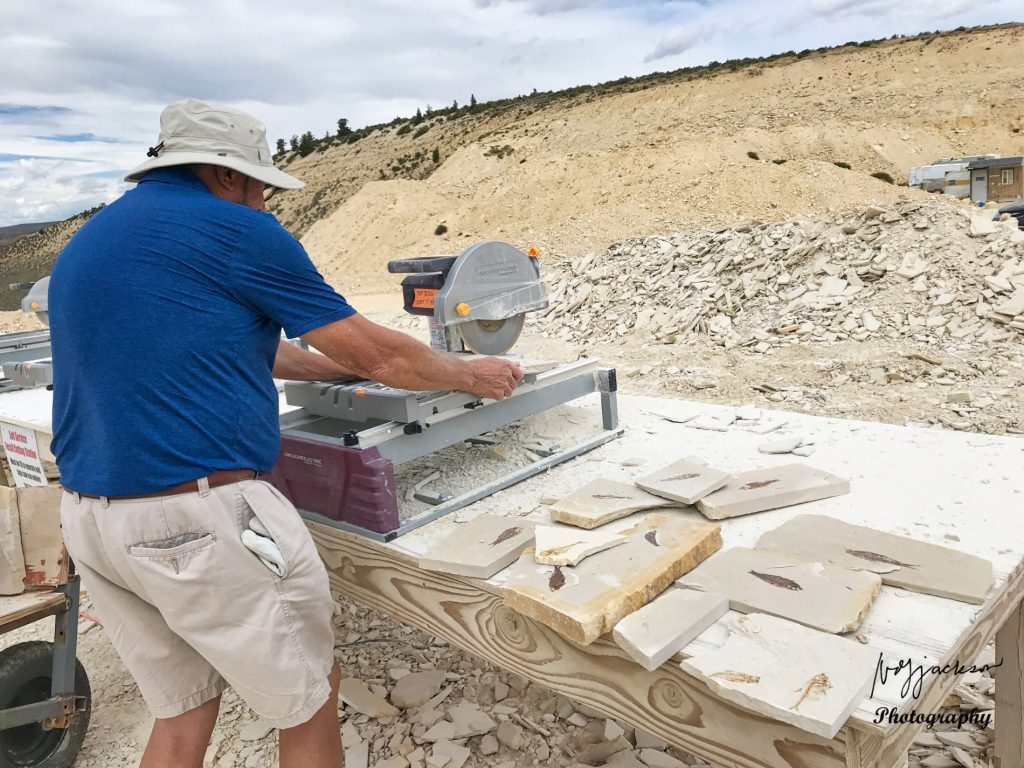 Here’s me trimming my fossils on the rock saw. The pile just off the right is trim material that was discarded. It’s a safe bet that there are still some fossils inside the cast-off slabs! 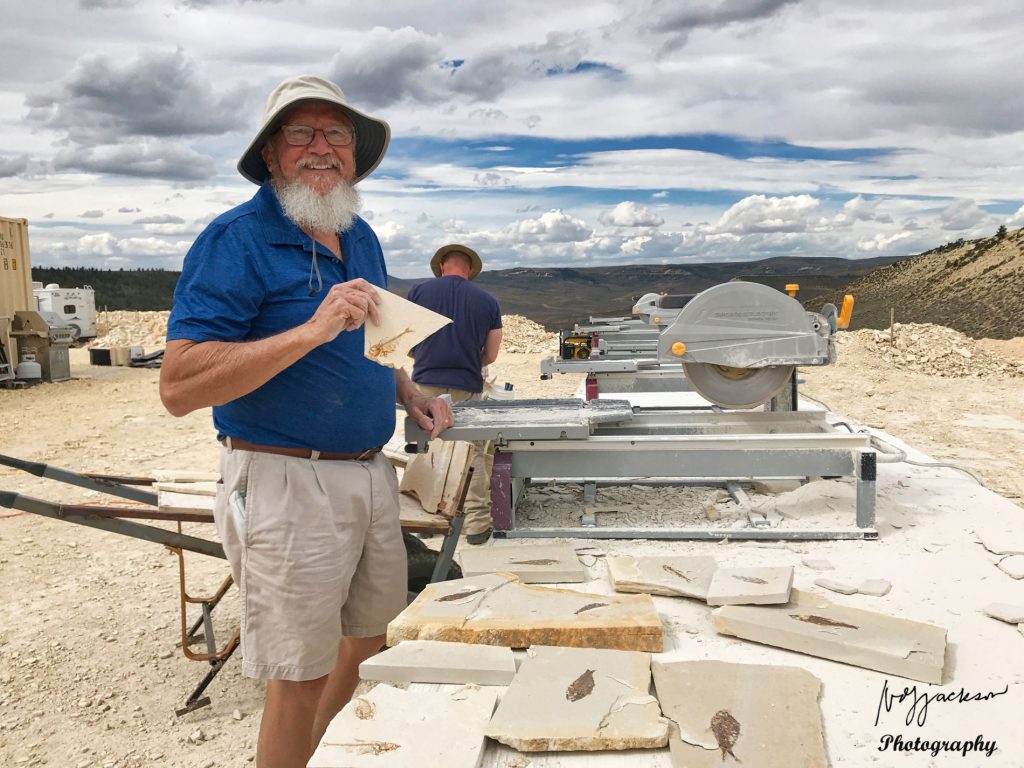 A cool little fossil that I trimmed. It was on the edge when I chiseled it open and I almost ruined it with my eagerness to crack it open. 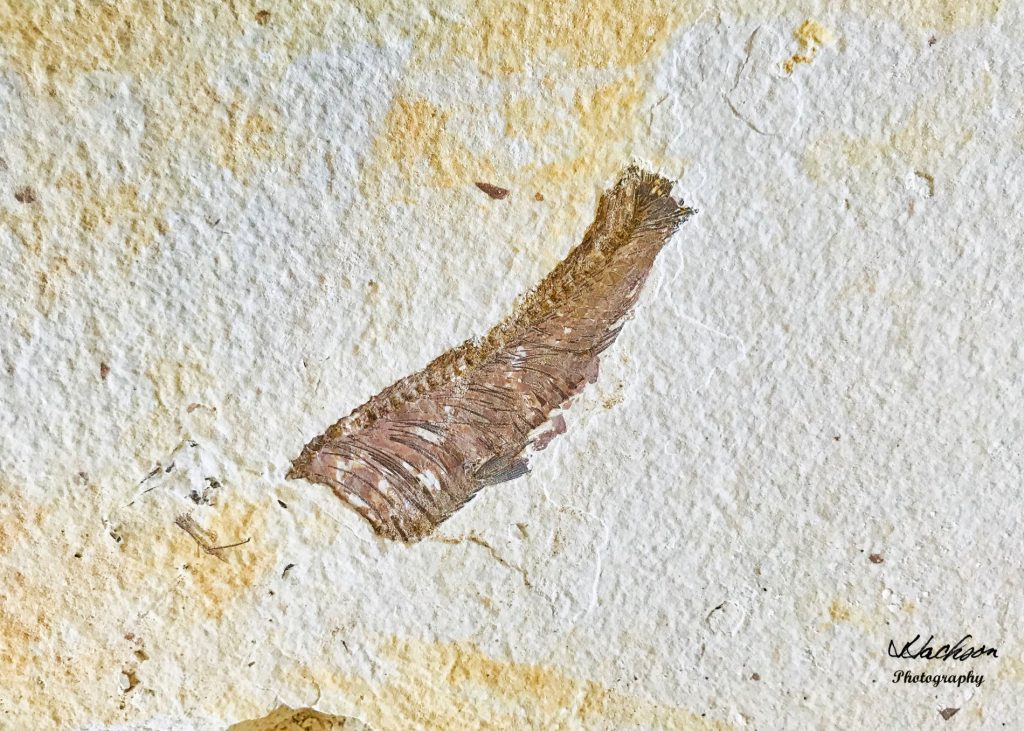 I felt there was more hiding around this fish fossil and our guide gave us some pointers on how to expose more of our fossils. He suggested letting them dry out for a week or so, then take your fingernail and pop away the material around the fossil. The next two photos show the result of that simple effort: 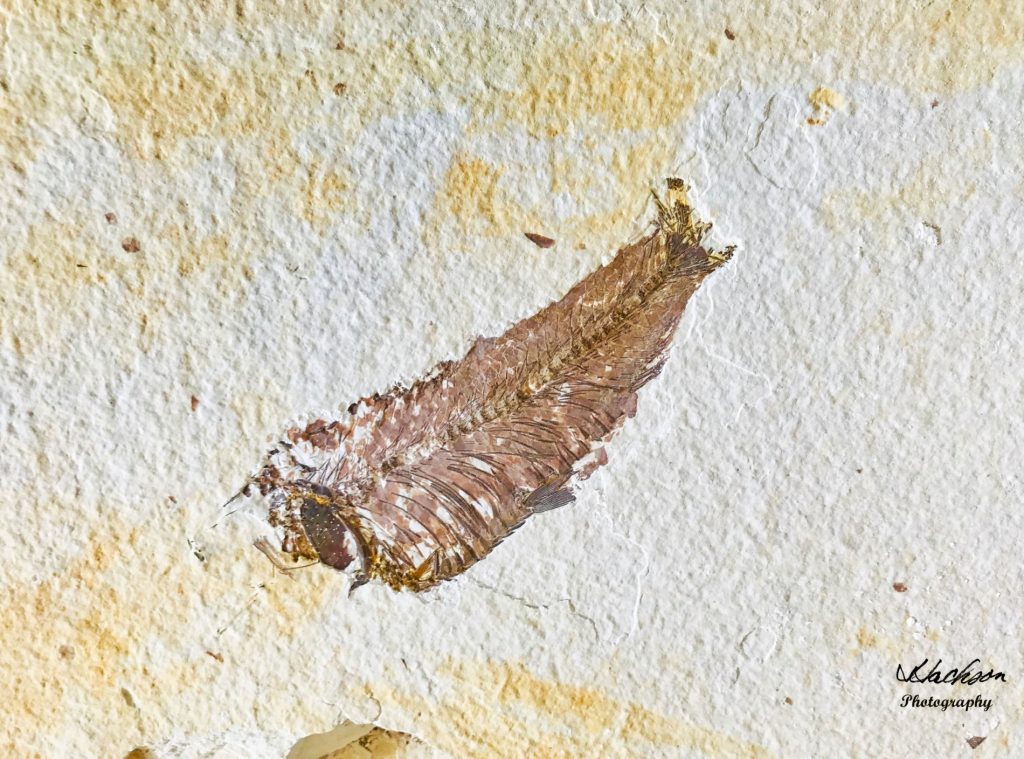 More and more of this fish fossil is exposed by simply popping off the excess material with my fingernail. If you use a small pick, be careful so you do not damage the fish’s scales and bones. 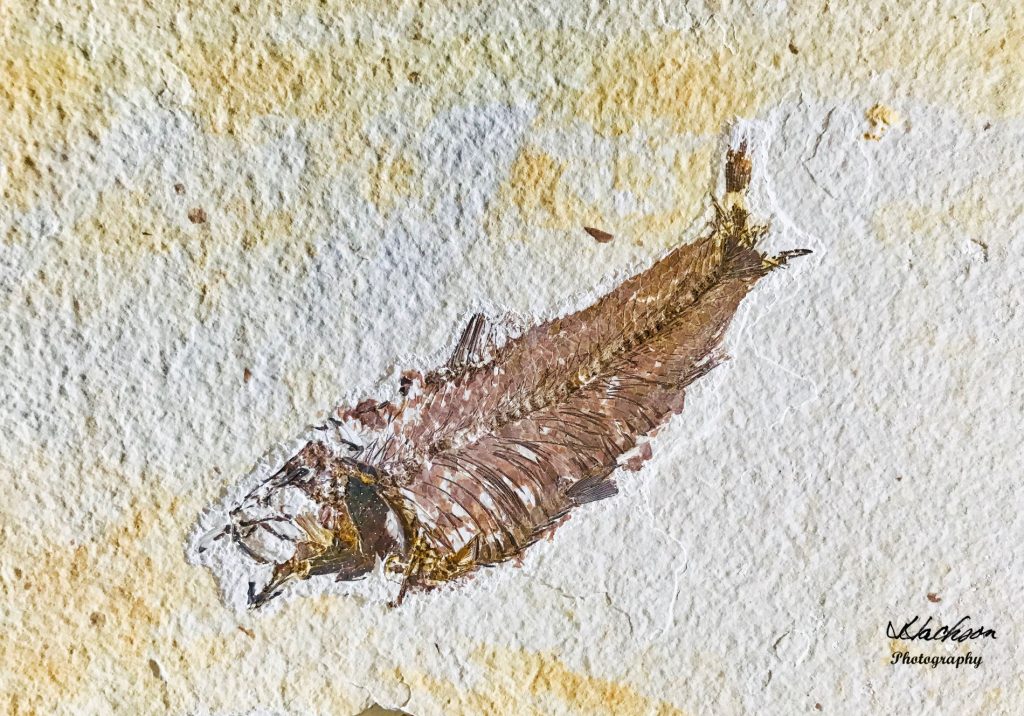 Would you look at that! My fish fossil is now completely exposed after being buried for 50 million years! 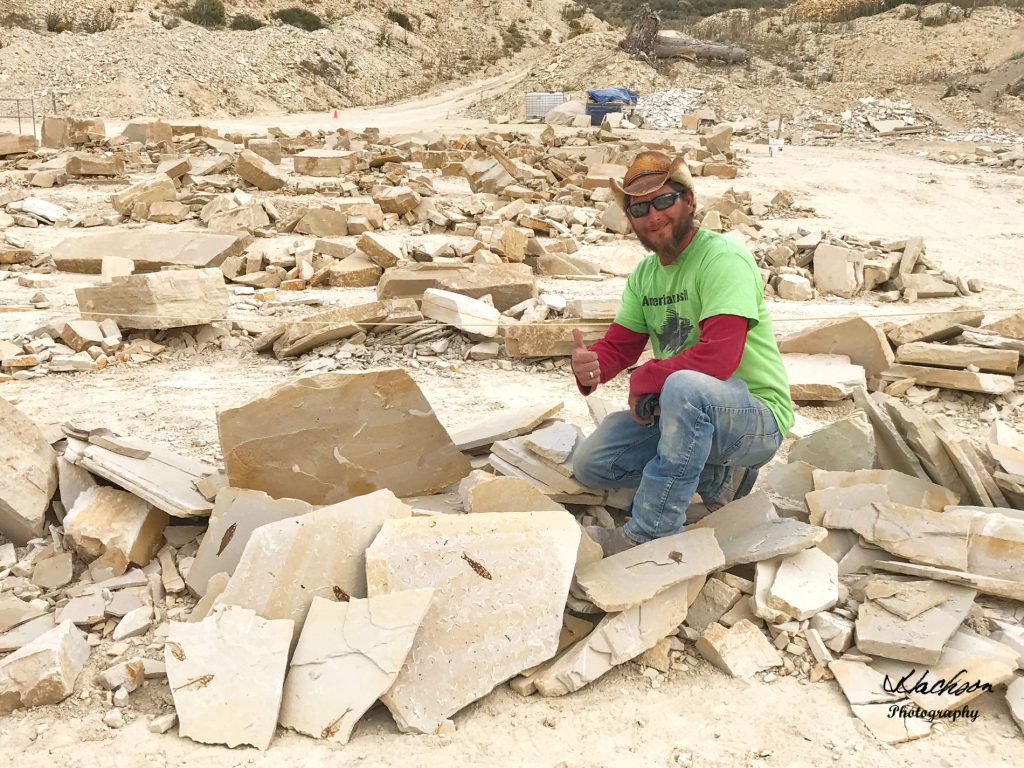 While you are in Kemmerer, don’t forget to stop by the very first store that James Cash Penney started there. The JC Penney store, originally called The Golden Rule Store, was opened April 14, 1902 and by 1912 he had 34 stores. As of 2018, the store is still open but with shorter hours and is closed on Sundays.

As an amateur paleontologist I have always enjoyed hunting for fossils. This adventure to American Fossil was way beyond my expectations and made for a great day. If this amazing place is not on your bucket list, it should be, it will be one of the oldest drops in your bucket!