My niece lives in Dubai with her husband who is a sushi chef in one of the top restaurants in this city.  We are here in Dubai for a week to spend some time with them, explore the city and immerse ourselves in the culture.  Tonight they took us to the Global Village. 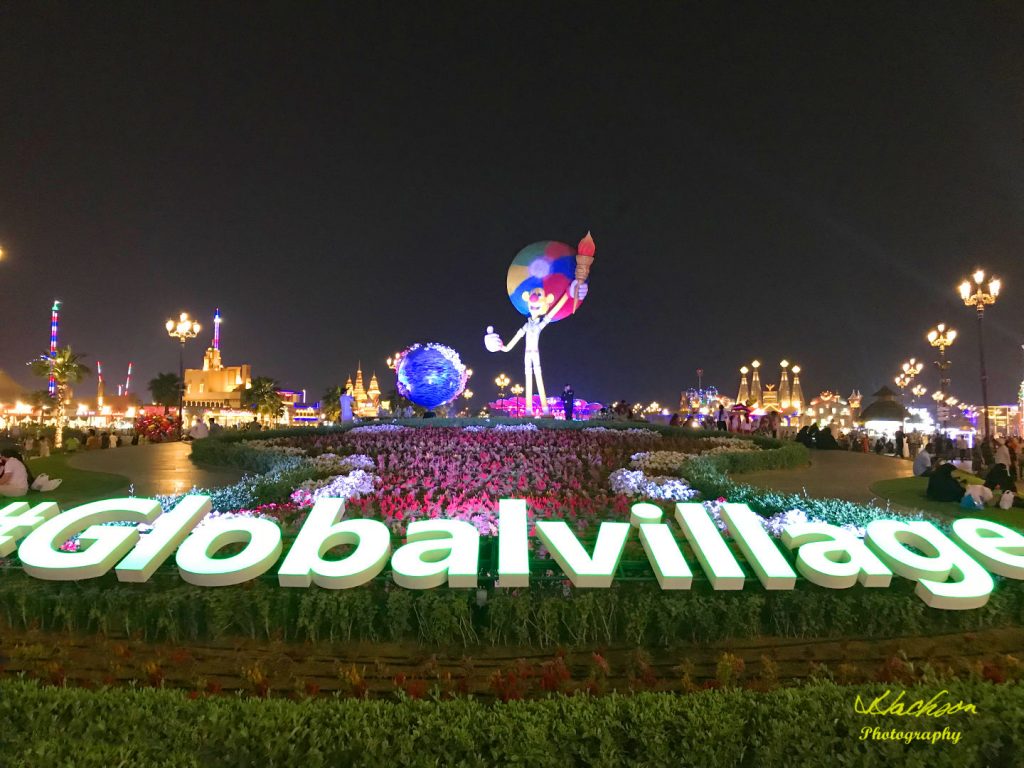 Initially I had been led to believe that we were going out for Arabic food, so I had anticipated spending the evening sitting in a cheesy rundown middle eastern restaurant eating strange food that I would be unsure of its origin, age and sanitation. 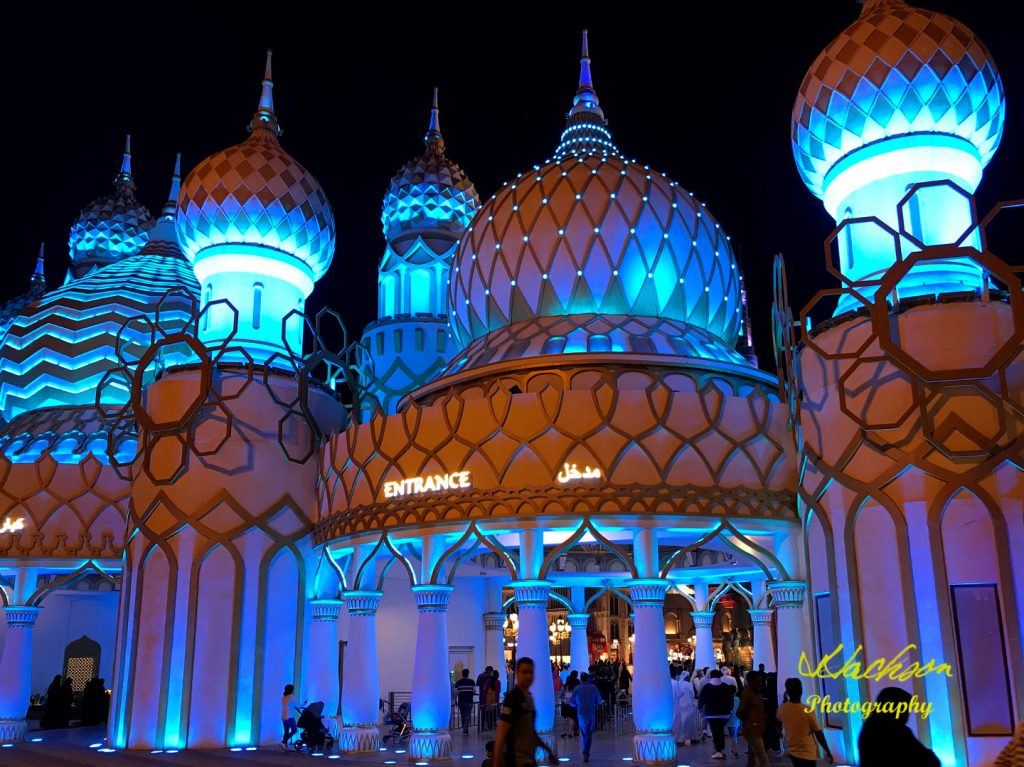 We caught a taxi at our downtown hotel and after negotiating Dubai city traffic we were heading southwest along the Sheikh Mohammed Bin Zayad Road, a rather well maintained, and very modern highway. As we traveled further away for the entanglement of collossal skyscrapers that fill the Dubai horizon, I couldn’t help but notice the vacuity and emptiness of this part landscape. It is vast and open and all I could see was the spectacular, colorful Dubai skyline far off behind us. There is coral-colored sand everywhere and the new construction that was so prevalent in the city proper of Dubai is almost non-existent out here. 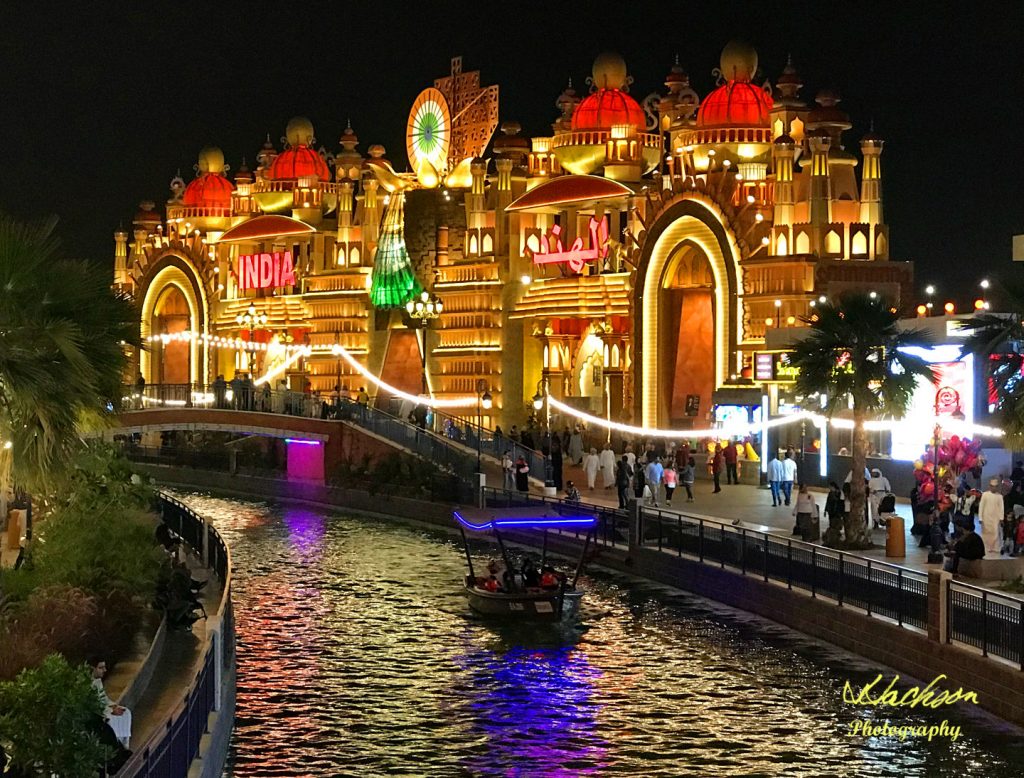 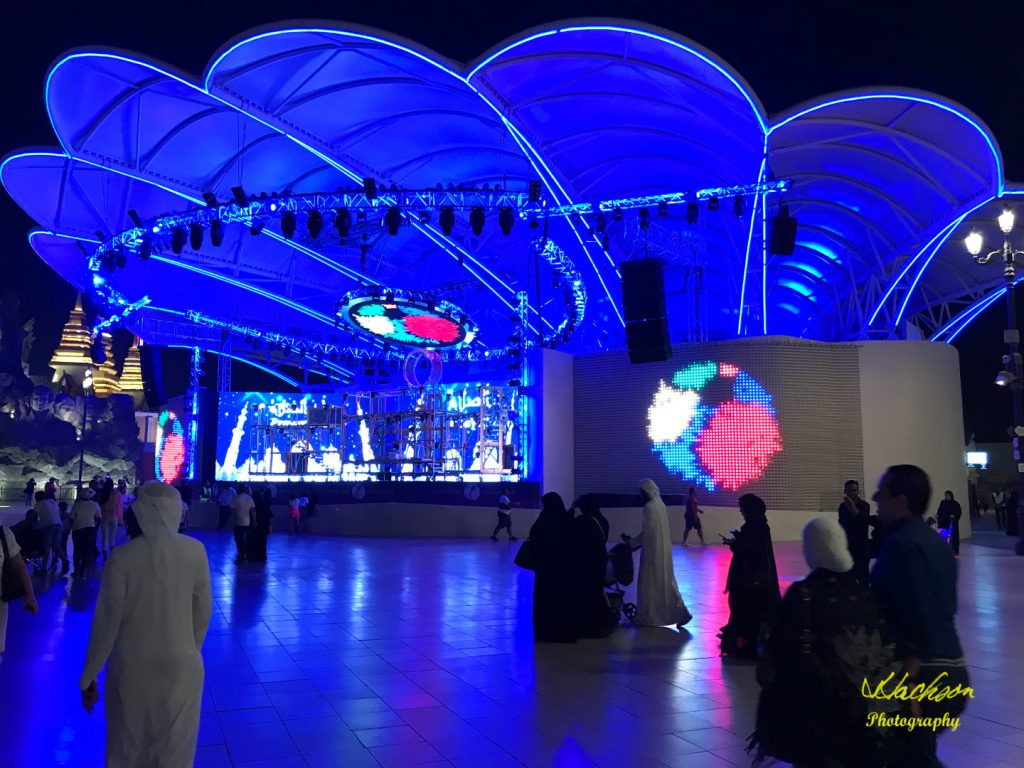 After a few minutes of leaving the city proper of Dubai, I hadn’t seen anything at all that closely resembles a place where we could find something to eat.  For that matter, there were hardly any buildings at all. I am thinking that this could be quite an adventure and I secretly hoped that wherever we stopped for dinner, it would be a low risk since this was only the beginning of our trip.  I had no desire to do the Travelers Trot dance from some hole-in-the-wall restaurant!

I could not have been more wrong.  Instead, we went to what is called the Global Village, a massive, Disneyland style complex.  It bore a slight resemblance to Epcot Center but on steroids, filled with dazzling lights and huge pavilions dedicated to virtually every country on earth.   It followed the same pattern as much of Dubai: to be the biggest and the best.  After arriving we met up with several more of our family members who live here in Dubai.

I was truly mesmerized by the dazzling lights and the overall huge scale of the complex.  The wonderful smell of spices and cooked food filled the air.  Families strolled about, ducking in and out of massive pavilions.  They rode the high-tech amusement rides and we watched as screaming riders defied gravity and were plunged many stories down a tall tower, or flung haplessly around on a hyper-speed, 3-dimensional Ferris wheel.  One young passenger was spinning madly out of control on a ride tht contained many small revolving airplanes, apparently having not paid attention to specific instructions on how to navigate the wild ride.  You apparently control the yaw and the pitch by levers on the wings next to you.  But this kid was spinning madly out of control and screaming loudly and equally madly. 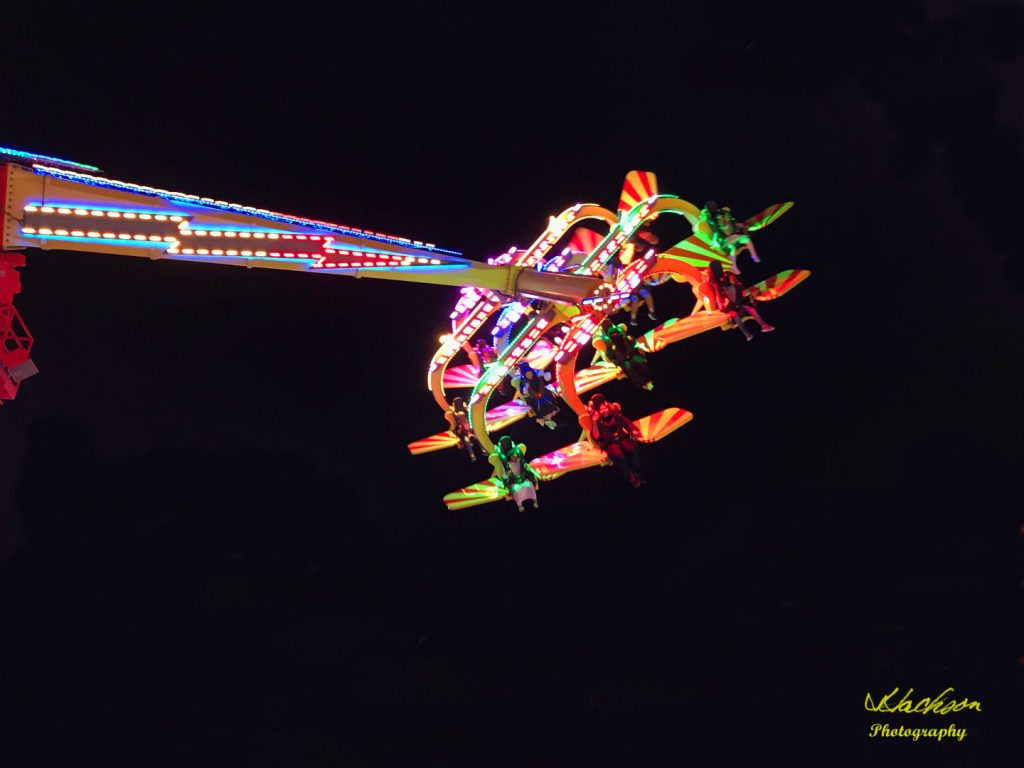 Click on the following to watch a video of the hair-raising ride through the skies over the Global Village in Dubai: 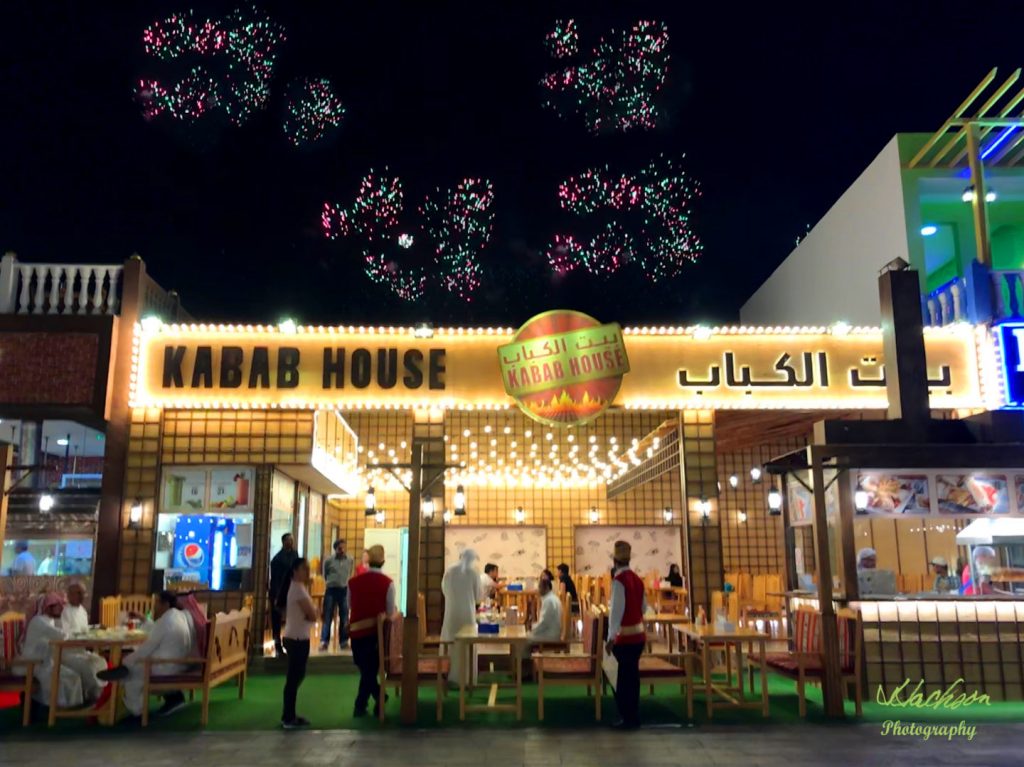 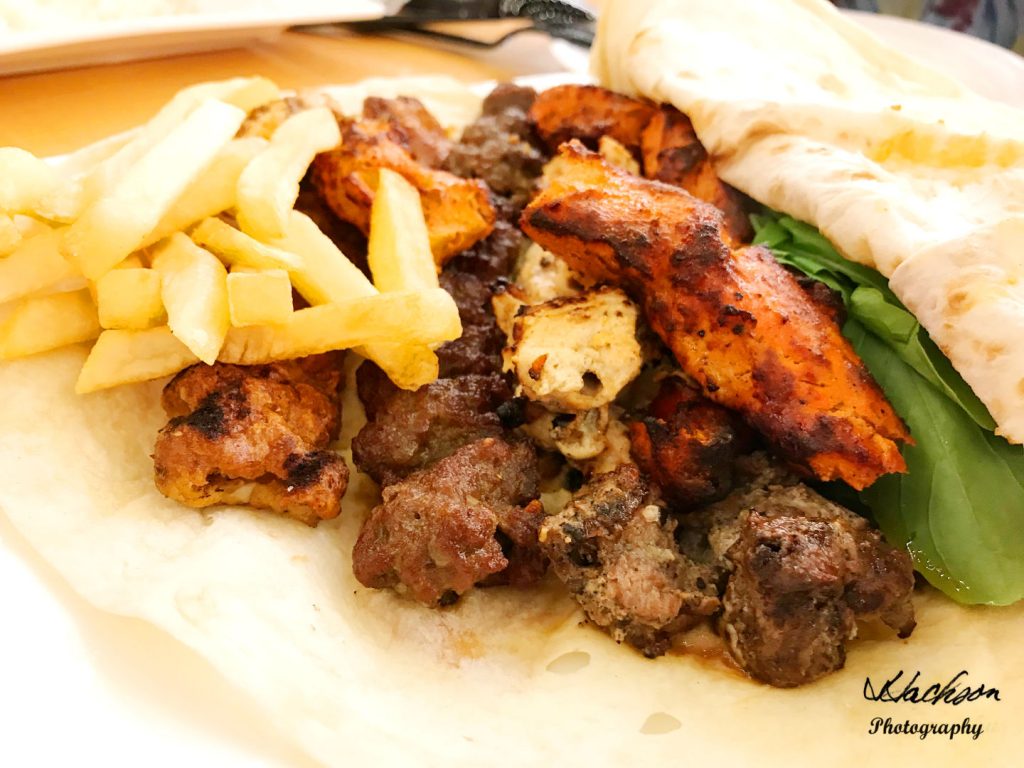 I tried several samples of food from the pavilions we entered.   Yemen, which I had no idea, is famous for honey.  Inside their pavilion were hundreds of gallon-sized jars, all filled with different types of honey.  I ate sunflower seeds that were the largest that I have ever seen, and they were, without doubt, the best tasting.  I ate some things that I have no idea what they were, not bizarre things, but things that looked appetizing and tasted good. 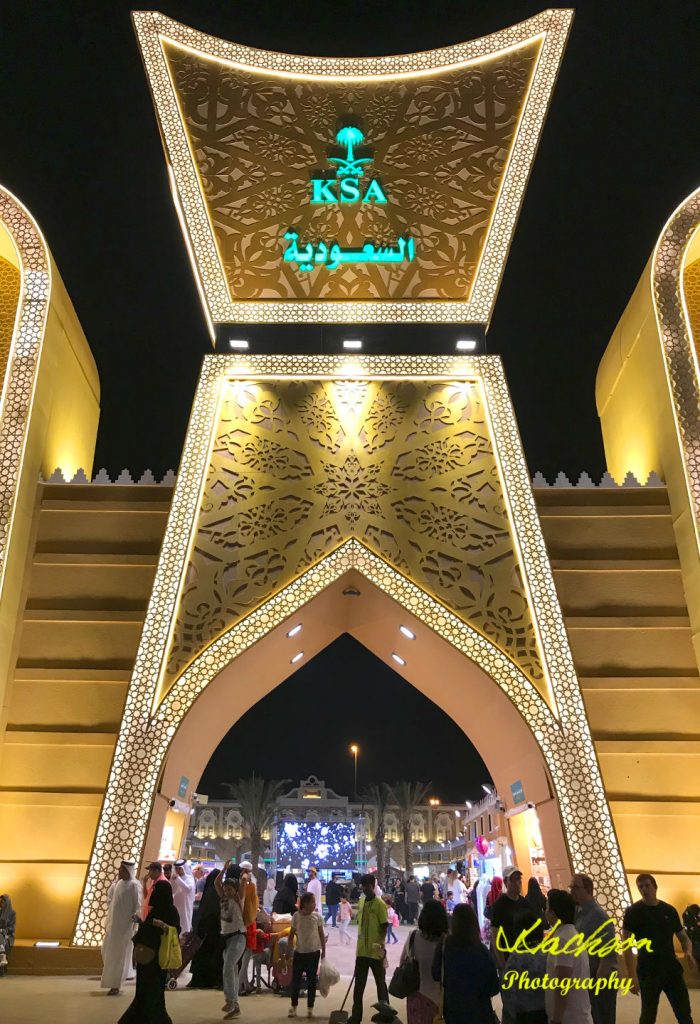 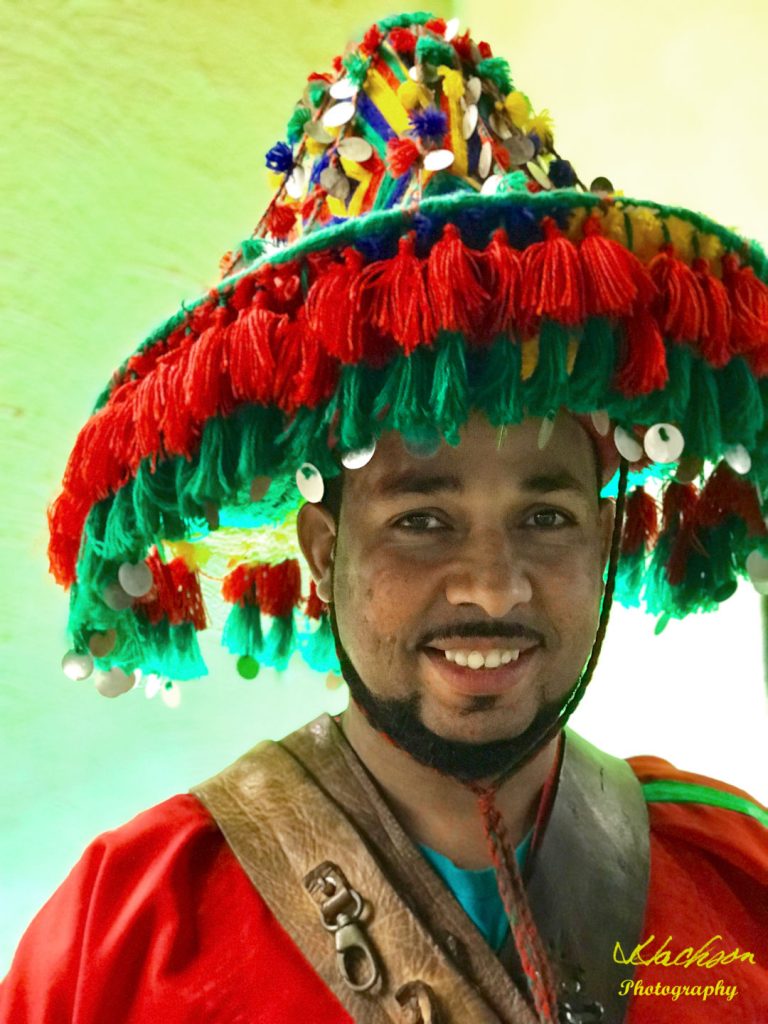 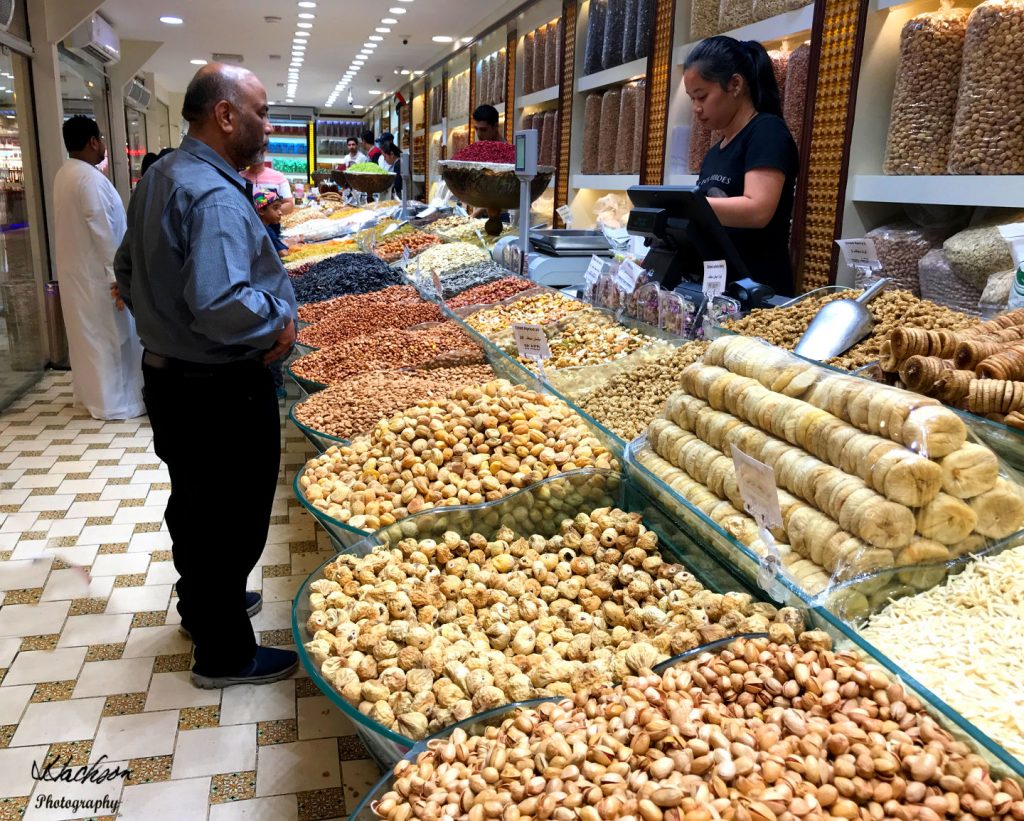 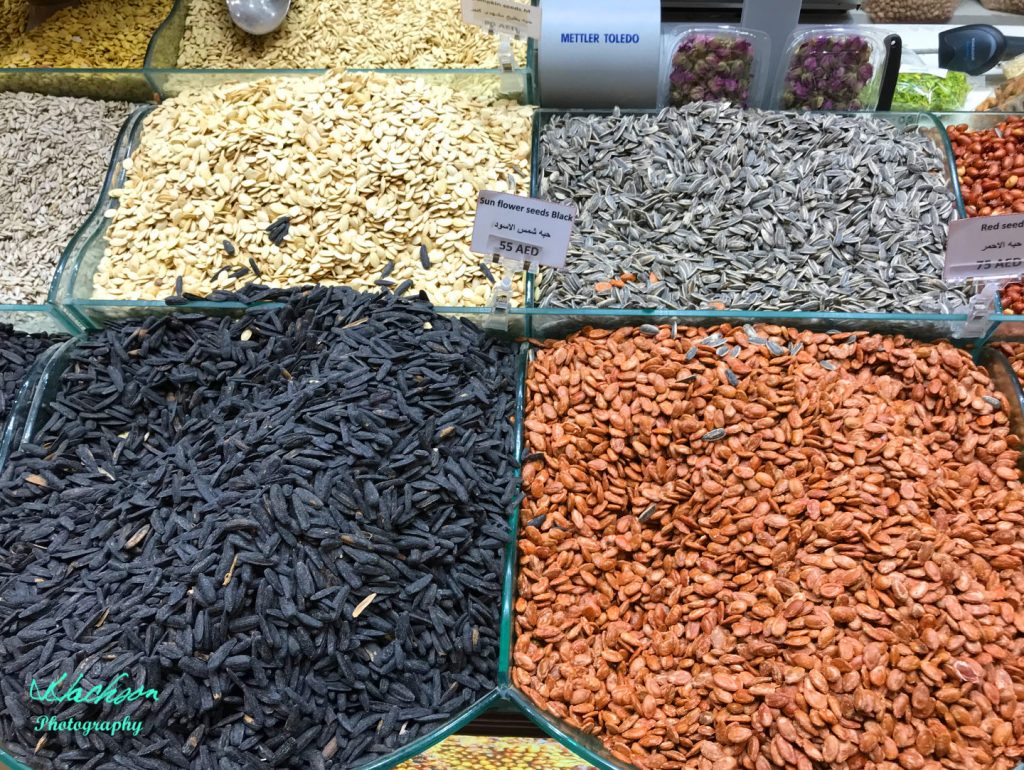 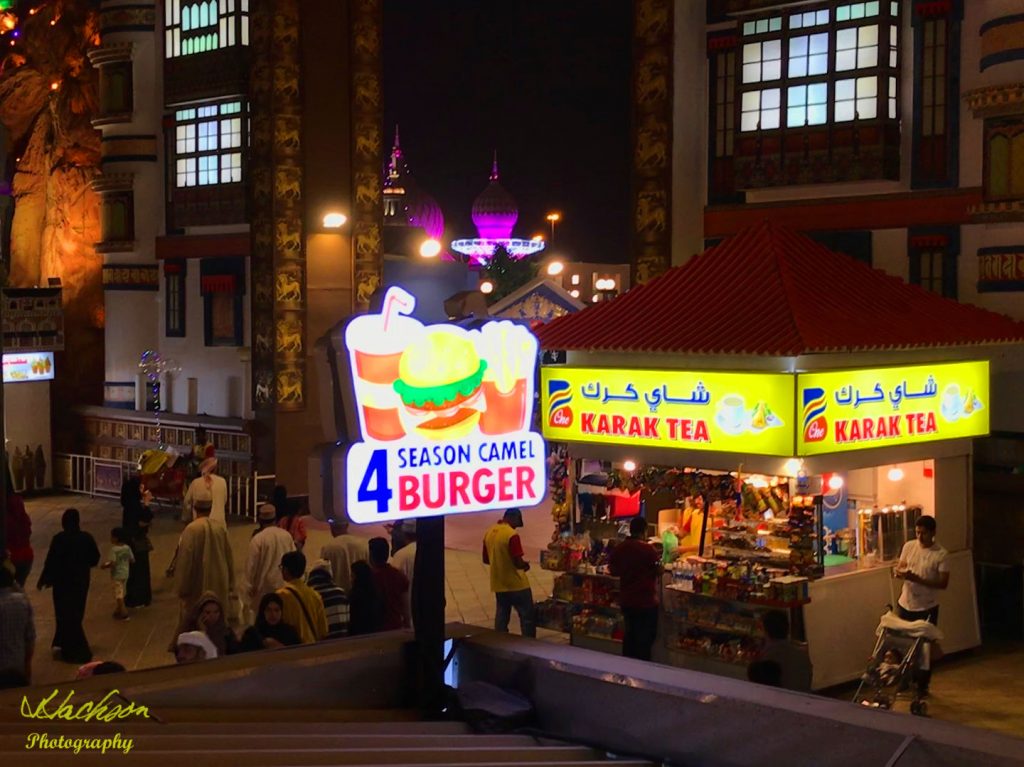 We ultimately found an Arabic restaurant, thanks to a nice Filipino lady who was hired to entice customers into their restaurant.  Since our group was mostly made up of Filipinos, we were glad to have her help us with our food order.  However, I think we could have just pointed our fingers to anything on the menu and we would have been just fine.  I was delightfully surprised at the good quality of the food, the great barbeque flavor of the skewered meats and basmati rice and even the wonderful lemon-mint drink concoction.  If I were asked to put together a listing of the top ten places that I have enjoyed visiting in my lifetime, this Global Village would have to be near the top! 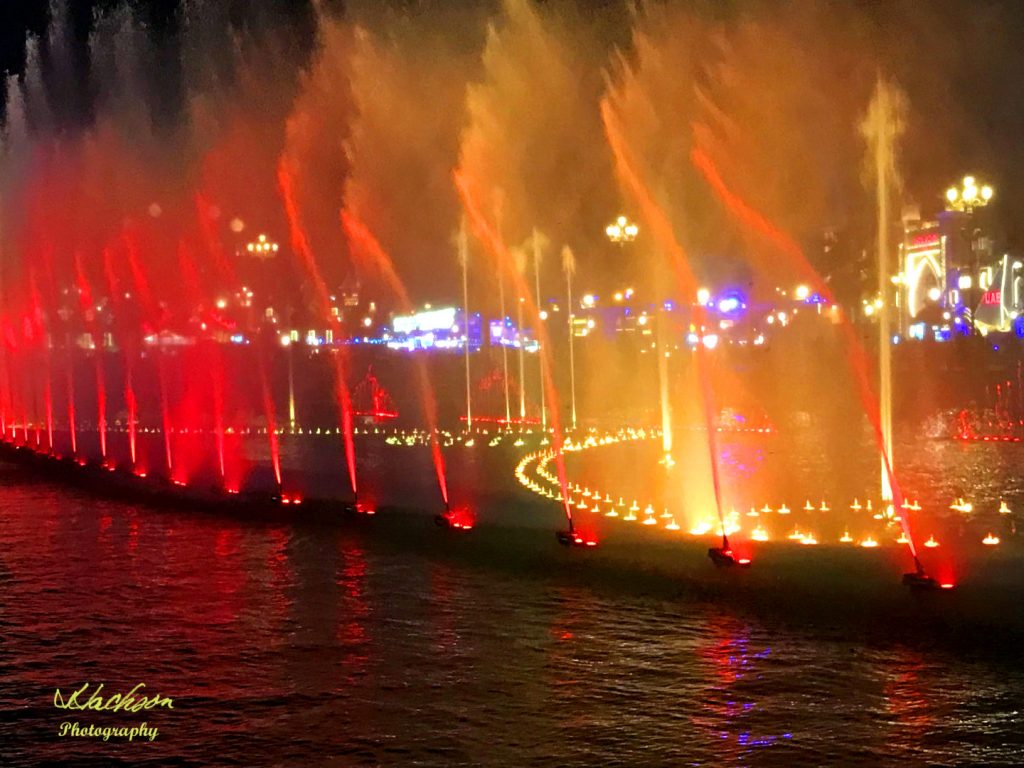 The lights and colors and cultural diversity of this wonderful place are really what make it so charming.  Although we did arrive later in the day, the warm evening made for a very pleasant time while we were here.  We did see a great deal in the Global Village, however, had I to do this adventure again, I would certainly have given it more time in order to spend more time enjoying this special place.

There are times when I plan out the addition of items on my so-called bucket list.  I study them, doing plenty of research before an item gets put on the list.  And then there are the times when a heretofore unknown item or place is visited and I instantly know that it should have been on my bucket list and it immediately becomes one of my drops in the bucket.