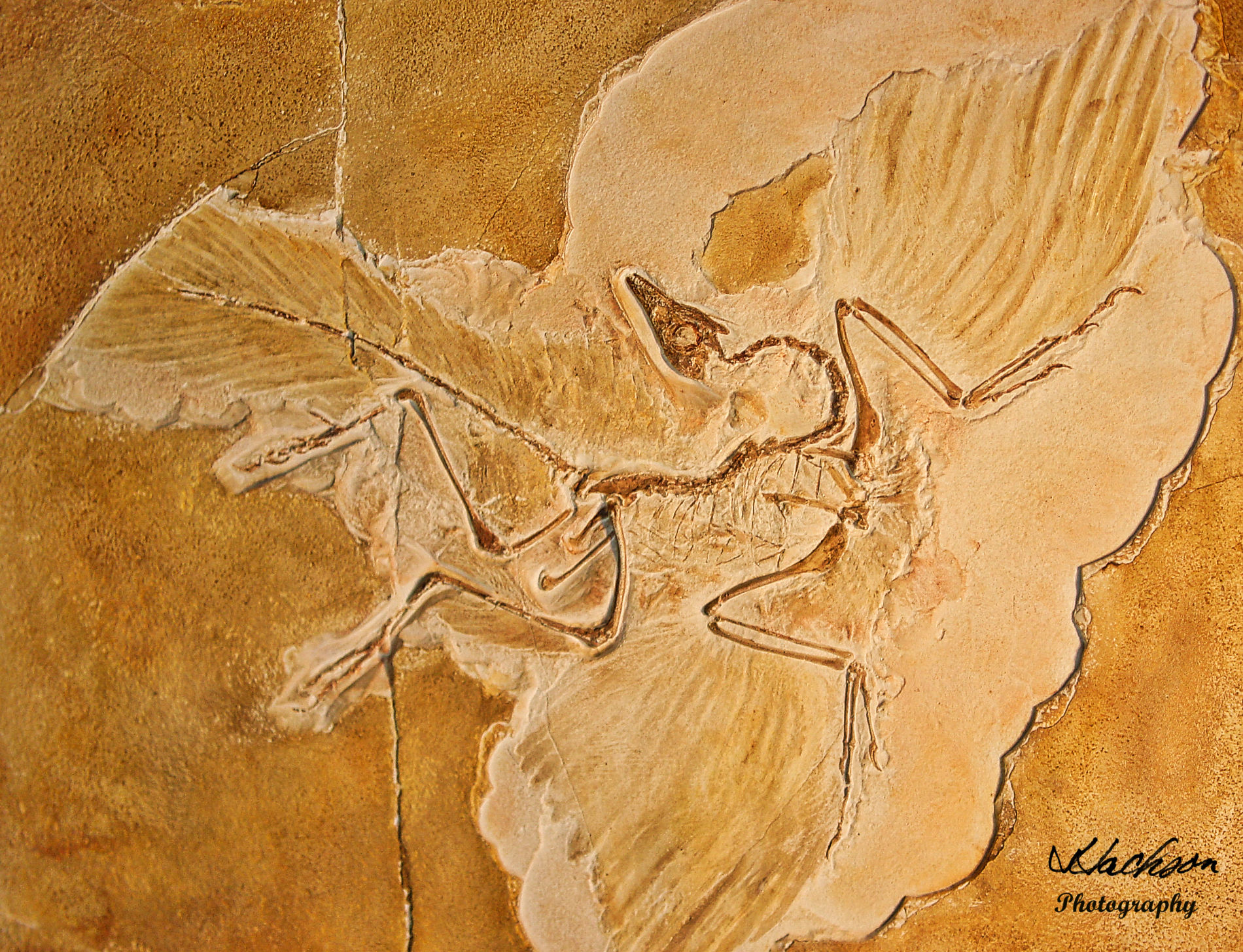 On every rockhound fossil collectors bucket list is a visit to the world-renown fossil beds of Solnhofen, Germany. Of course, it is easy to add an item on your bucket list but to actually have that opportunity is another story. And then again, you may want to go there but your better half may not share your enthusiasm for hunting rocks in the hot sun! Perhaps this short blog will help you and your significant other decide whether a trip there is worth the effort and the expense. For me, just drinking that great German beer was incentive enough! 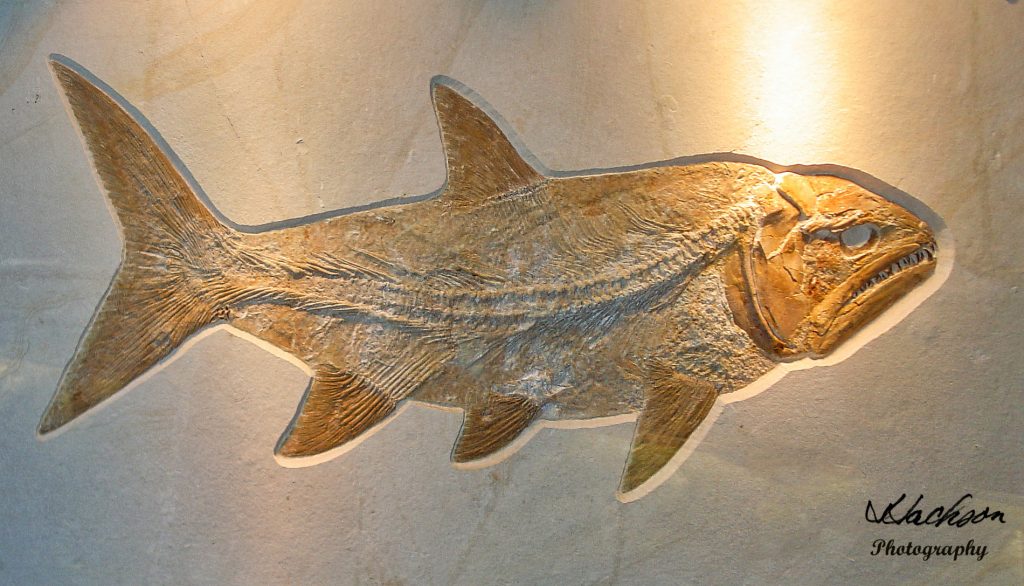 The Solnhofen Limestone, which is also known as the Solnhofen Plattenkalk, is a Jurassic-era fossil bed where a very large and rare collection of fossilized plants and animals have been preserved. Many of these softer organisms have been fossilized in such stunning detail that they have never been found anywhere else in the world. These highly detailed fossils of fragile organisms such as sea cucumbers, starfish, feathered lizard-birds, dragonflies, and a host of rare prehistoric plants, are remarkable in their preserved state. Perhaps the most well-known fossil of the Solnhofen limestone quarries is the earliest example of a feathered theropod dinosaur, the Archaeopteryx. The Solnhofen specimens have been preserved over the millennium in such great detail that they are ranked among the world’s most famous examples of fossils in the world. 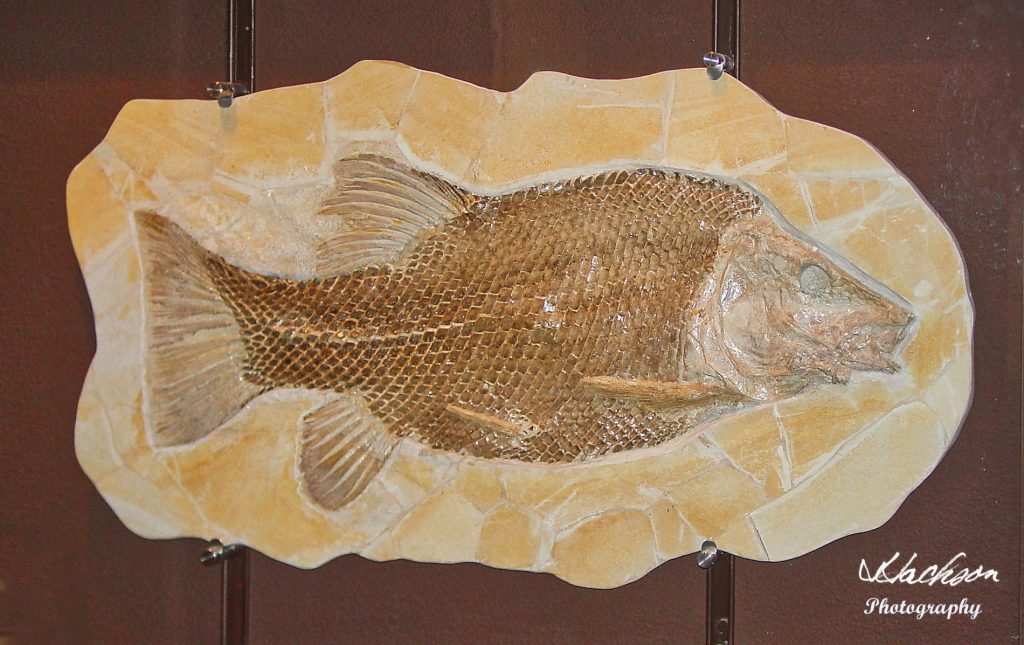 The Solnhofen limestone fossil beds are situated in the German state of Bavaria between Nuremberg and Munich and are an easy drive from most parts of the country. There is a museum in Solnhofen, where the material was originally quarried as a source of lithographic limestone. Nearby is a forested area that has several clearings where one can spend time searching for fossils in exposed limestone outcroppings. 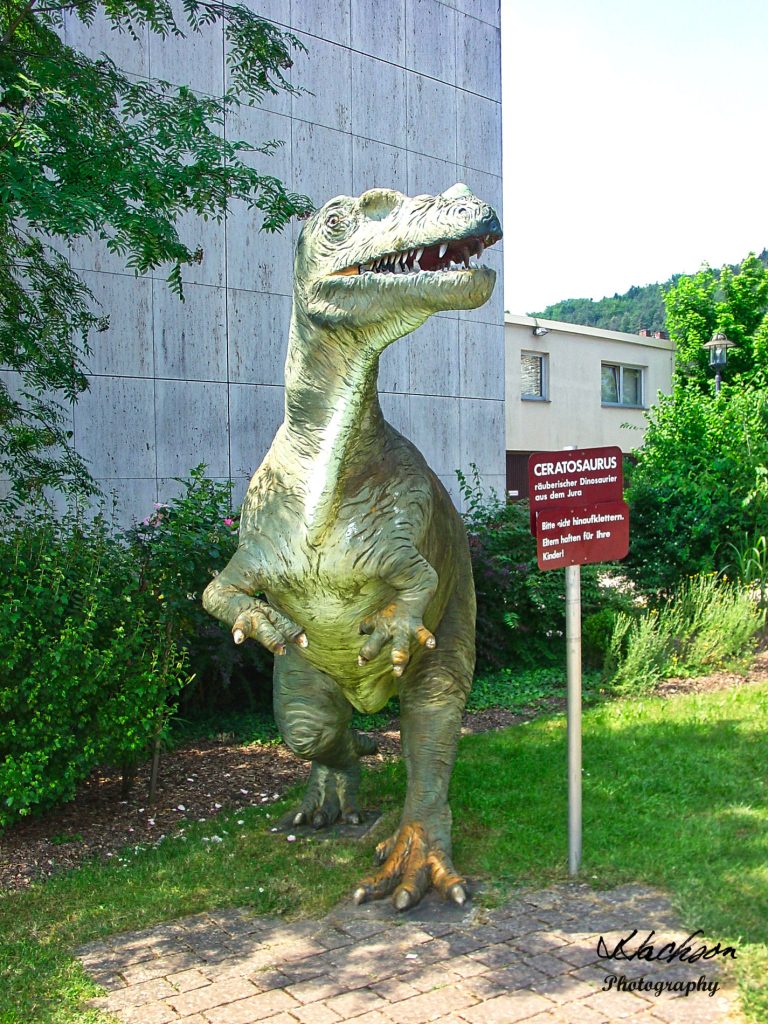 In the neighboring town of Eichstadt (Eichstätt) is located the Jura Museum which houses an extensive display of Jurassic fossils that were found in the quarries of Solnhofen and the surrounding limestone beds. Over the years, there have been twelve full-bodied fossil remains found of the Archaeopteryx in the limestone deposits near Solnhofen. In Eichstadt, you can see a replica of that world-famous feathered bird-lizard, which initially was discovered in about 1860 by Hermann von Meyer. The original is currently on display at the Natural History Museum of Berlin. 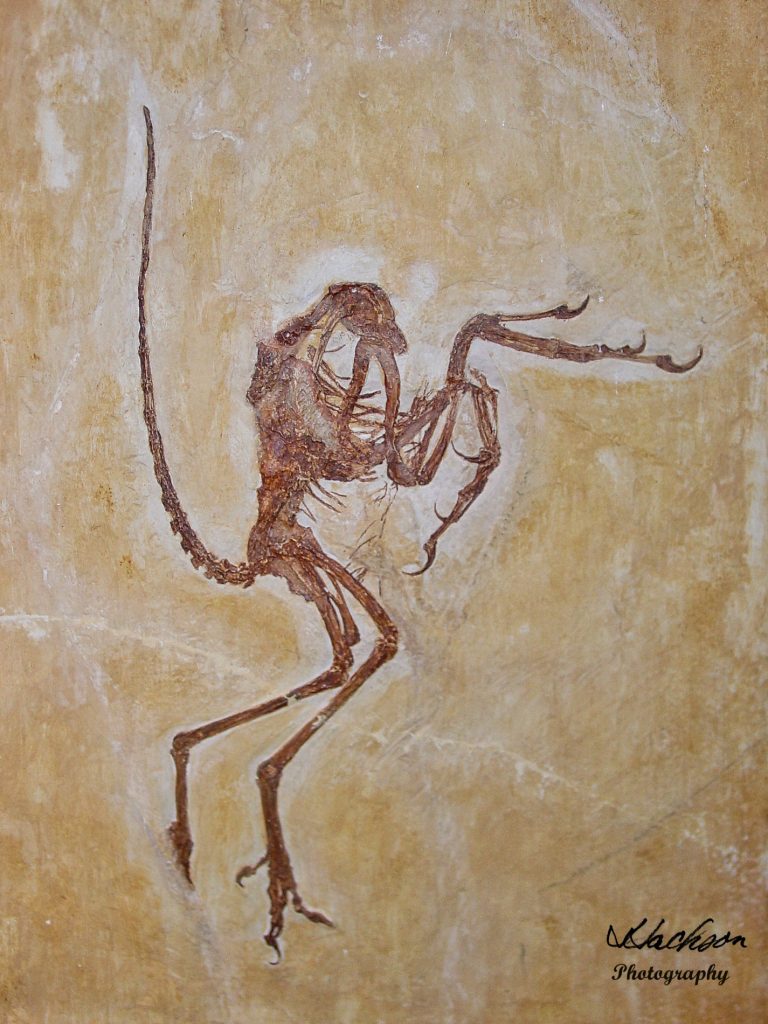 The Solnhofen limestone has been quarried since the days of the Reformation in the 15th Century. The very fine-grained, light yellow colored limestone has been used throughout history in the making of lithographic plates and in fine art sculpture. The limestone was formed over time in a stagnant underwater environment that was totally depleted of oxygen. This anoxic environment was also hypersaline which meant that the salt content was so high that it made the water toxic. 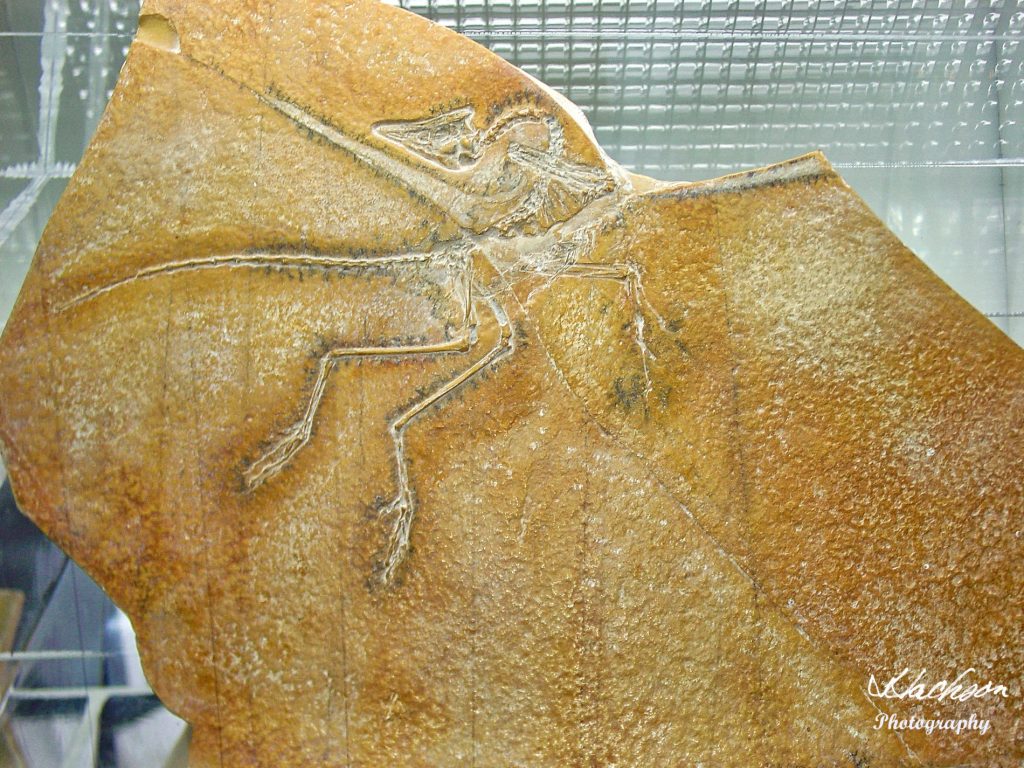 The area of Solnhofen was, during the late Jurassic period, an archipelago at the edge of the Tethys Sea. In this area were tranquil lagoons that were periodically exposed to the seas. However, during times when the placid lagoons were blocked off from the open sea, the salinity rose high enough that the resulting brine-water could not support life. Since the very salty water was mostly devoid of oxygen, the typical scavengers were absent and any organism that happened into it, whether from the sea or the land, became buried in soft sedimentary calcium carbonate mud. The serene water combined by the absence of predators and scavengers allowed many delicate organisms from being consumed or damaged by heavy tidal currents. Elegant dragonfly wings, as well as a host of other delicate insects, birds, lizards, and plants that were trapped in the lagoons, were all well preserved. The fossils, many of them very spectacular, are diverse in their range and provide a snapshot of the ecosystem in this region during the Jurassic period. 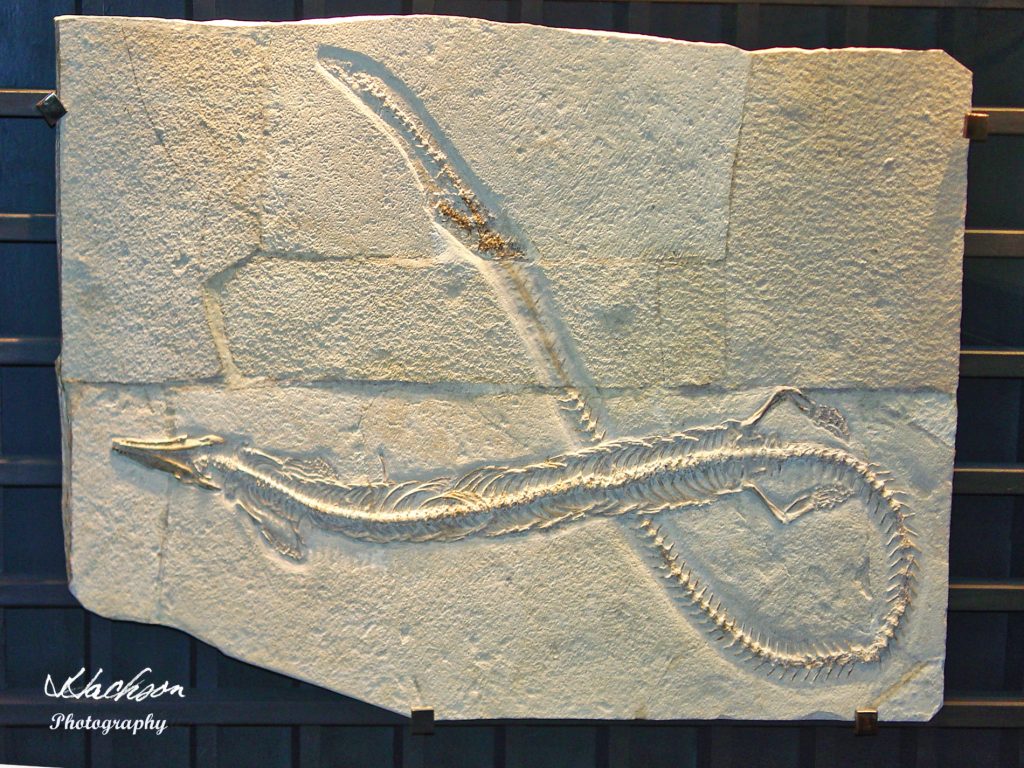 The ultra-fine grain structure and superb quality of the Solnhofen limestone are undoubtedly due to the dry periods between the times when the lagoons would flood, then dry. Had the lagoons been continuously underwater, large expanses of limestone blocks would have formed. Instead, over time layer upon layer of limestone formed as the sea flooded the lagoons then receded or dried up. When there were times that the lagoons flooded, sea creatures as well as and plants were carried into them. These organisms became trapped and were embedded in the soft mud as the water receded. Over time more flooding brought more mud and more organisms which were encased layer upon layer. Over the course of 150 million years, the mud hardened and the organisms were petrified. 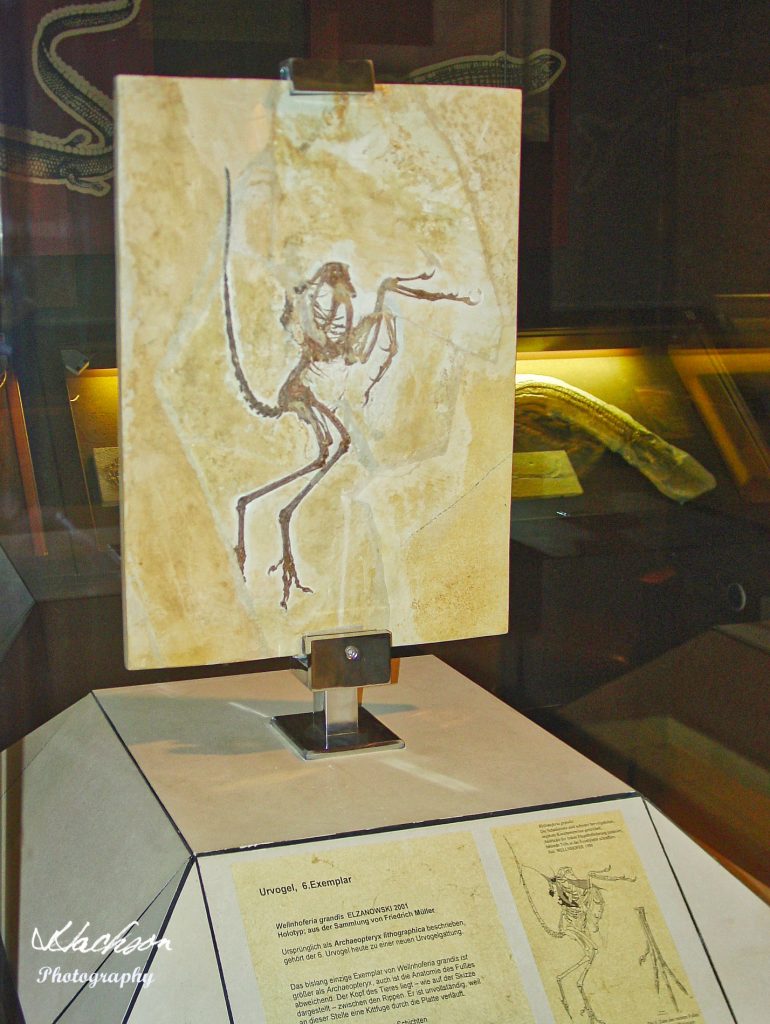 There were occasions when the flooded lagoons did not dry out completely. During these times there were shallow pools of water that held soft, sticky carbonate mud along its shores and bottom. Many insects, reptiles and small dinosaurs became inescapably bogged down in the quagmire. To date, there have been over 600 different species identified, including nearly thirty different types of pterosaur ranging from a few inches to over four feet in length. 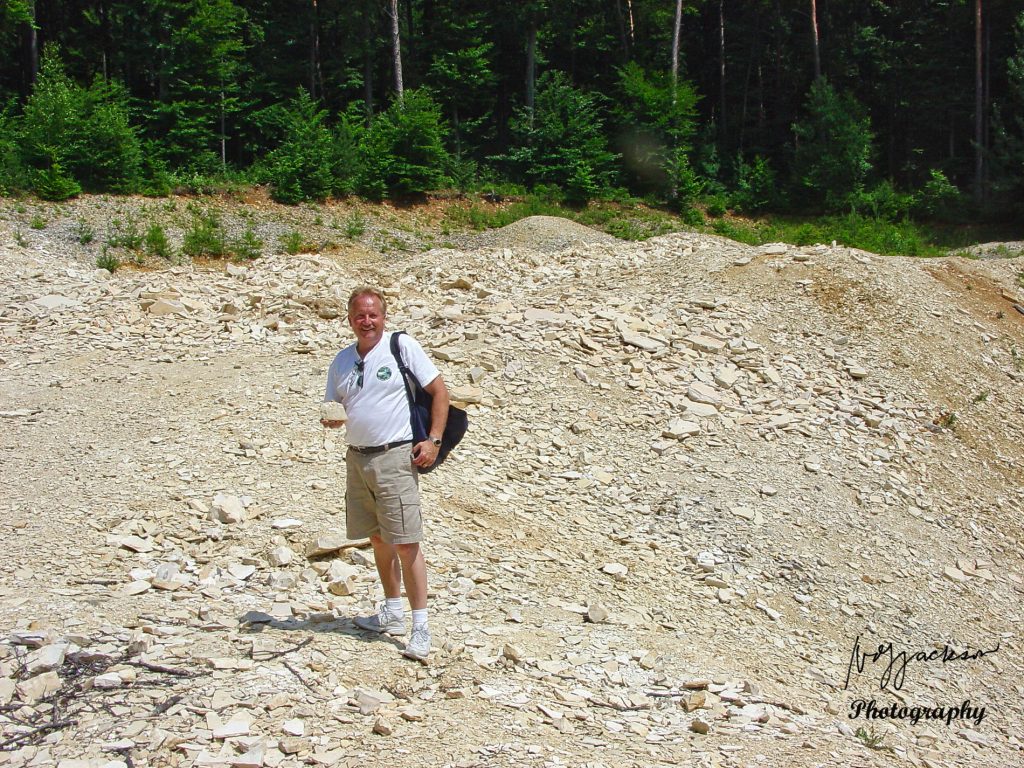 Above, me hunting for fossils in an area near the museum that has been designated a location where anyone can hunt for fossils. It was hot when we went there and I don’t mean the fossil collection.

Pterosaurs, (from the Greek pterosauros, meaning “winged lizard”), were flying reptiles of the extinct order of Pterosauria. This group of animals existed during most of the Mesozoic period from the late Triassic to the end of the Cretaceous period, about 66 to 228 million years ago. From fossil evidence, these Pterosaurs are the earliest vertebrates known to have developed powered flight. It is known that these reptile-birds had evolved to a state where wings were formed by a membrane, made up of skin, muscle, and other tissues, that stretched from the animal’s ankles to an extremely elongated fourth finger. 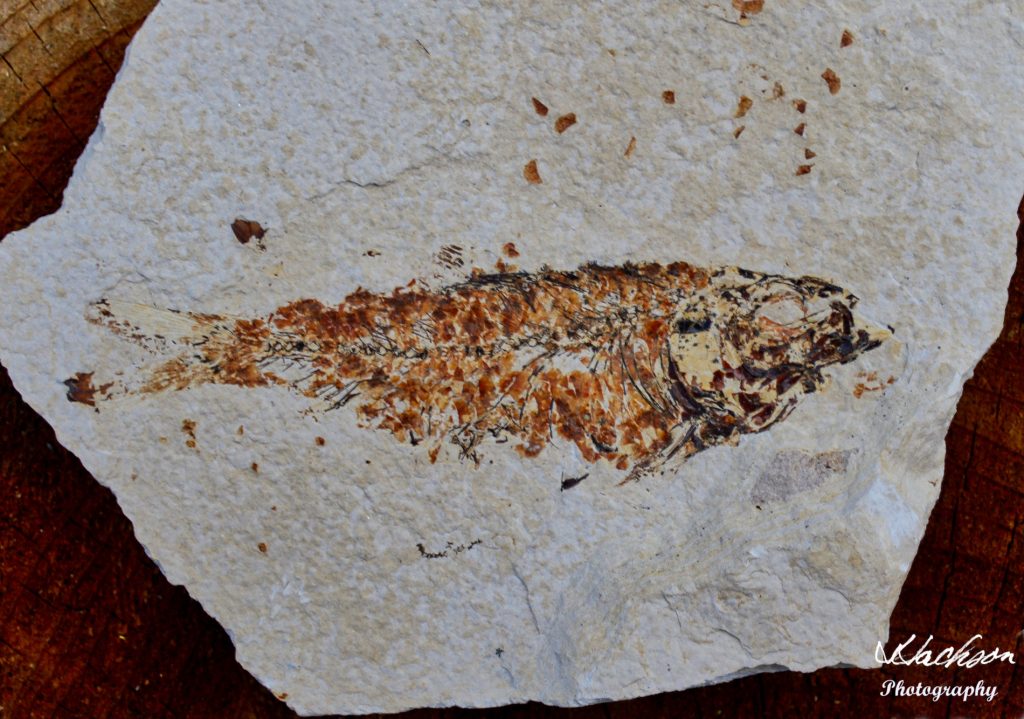 Early species of Pterosaurs developed long jaws that were fully toothed. They also had long tails but as the species evolved their tails began to reduce and they no longer sported teeth. The outer skin and winged membranes were clad in a coating of hair-like filaments known as pycnofibers. These ferocious-looking winged animals encompassed a huge range of sizes, as adults, from the very small anurognathids to the largest known flying creatures of all time, the Quetzalcoatlus and Hatzegopteryx. 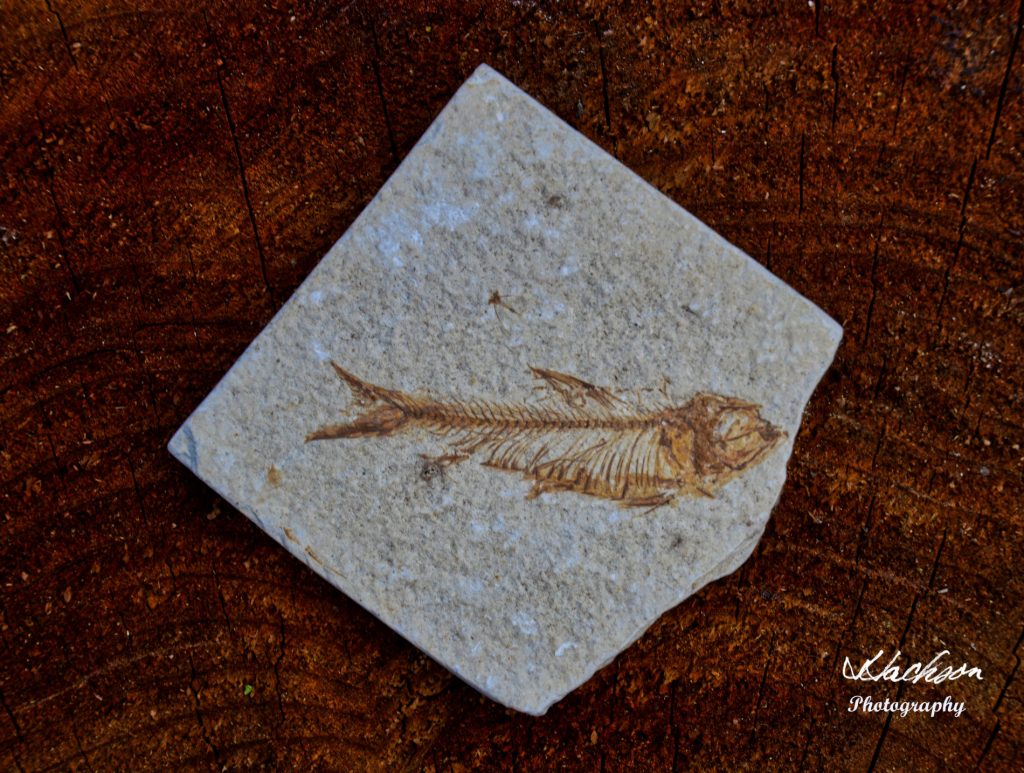 It has been already mentioned that the fine-grained texture of the mud silt that formed the limestone from the Solnhofen area makes it ideal for lithographic plate production. As a tribute to this, all of the fossils that originate from this area have been commemorated with the name Archaeopteryx lithographica. 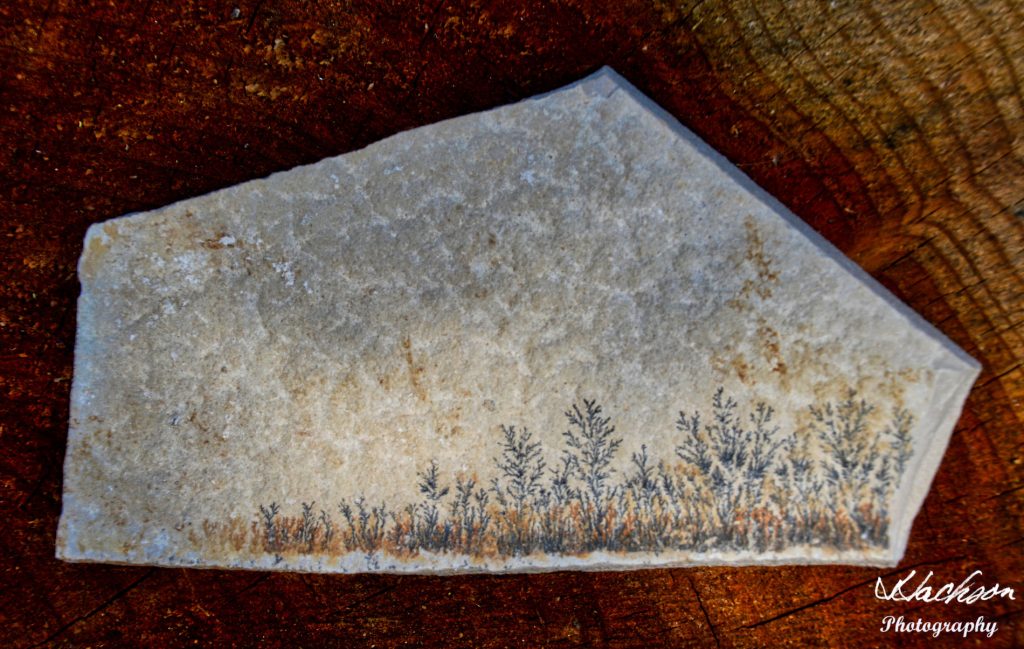 Interesting examples of dendrites can be found at Solnhofen 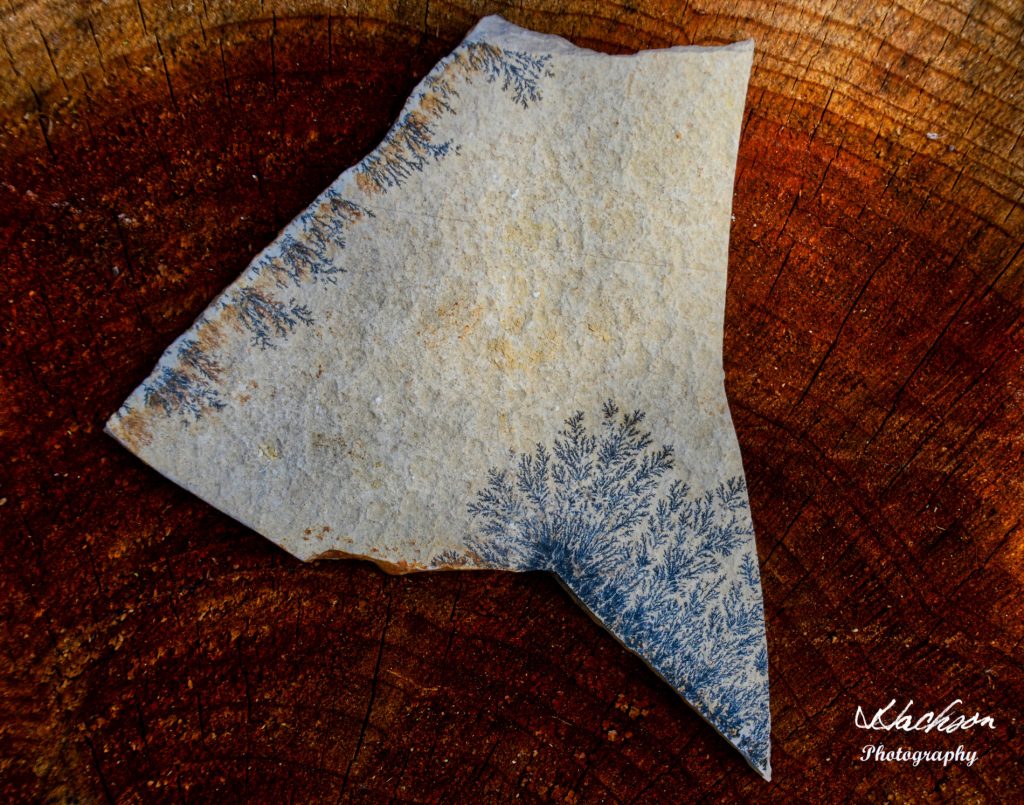 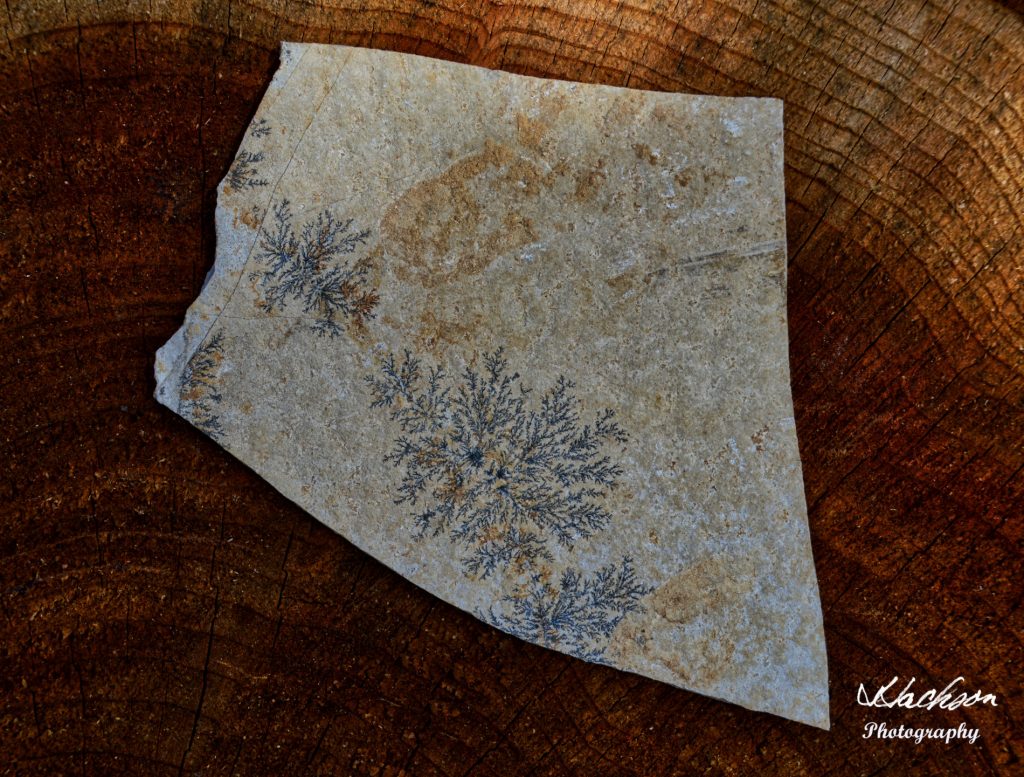 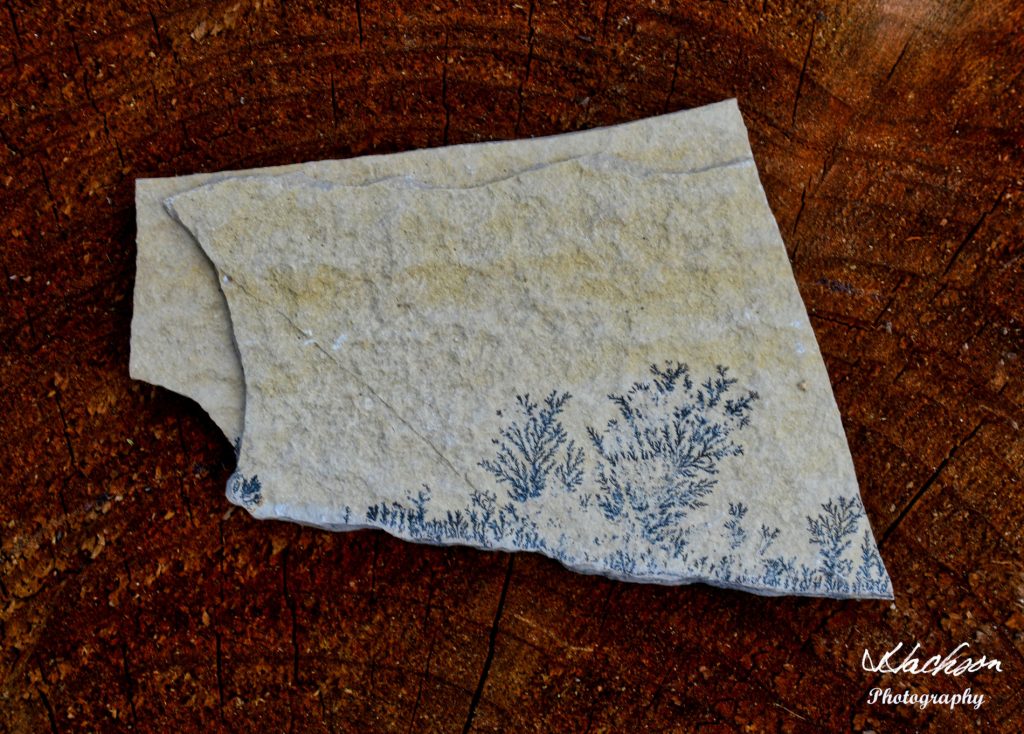 Solnhofen is one of the most southernmost towns in the rural Bavarian district of Weißenburg-Gunzenhausen. The Altmühl River cuts through the town which was founded by the Anglo-Saxon monk named Sola. There is not much information about his early life but we do know that Saint Sola came from England. He immigrated to Germany where he became a spiritual student of Saint Boniface, who was later set upon by a troop of pagans. Sola was dispatched to the Altmühl area in 750 A.D. from the monastery of Fulda and was given the task of converting the region’s pagan Germanic tribes into Christianity. As he started his missionary work there, he lived a hermits life in a rock cave, the so-called “Sola cave” which can still be seen on the edge of the limestone hill above Solnhofen. 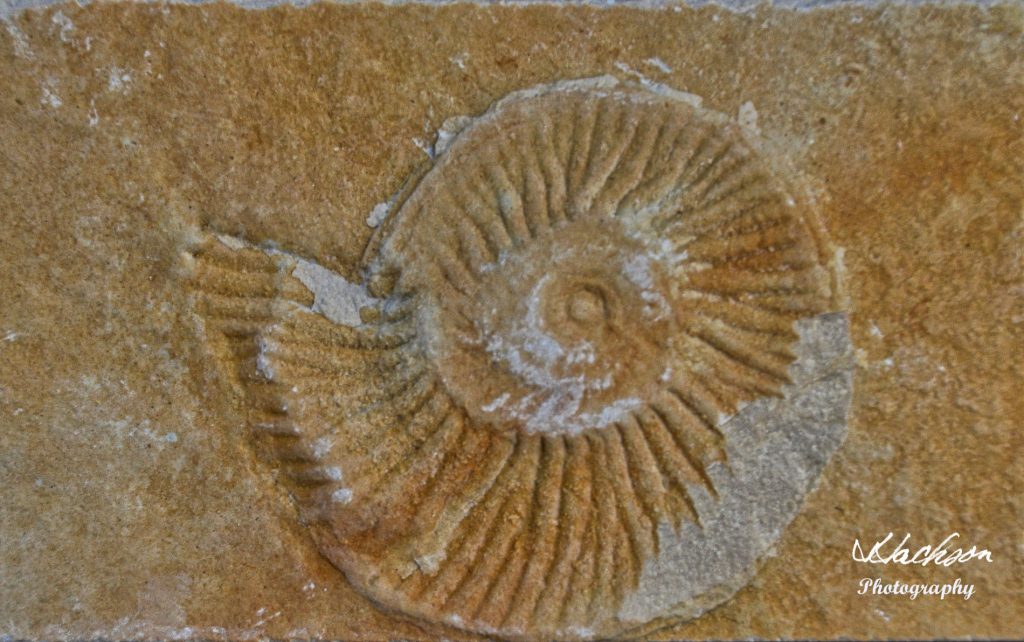 Saint Sola started a farm on the right bank of the Altmühl River on land that was given him by the great Charlemagne as a reward for his help during the construction of the “Fossa Carolina” a canal named after Charlemagne in what is today the German state of Bavaria. The canal was strategically intended to connect the Swabian Rezat River to the Altmühl River. 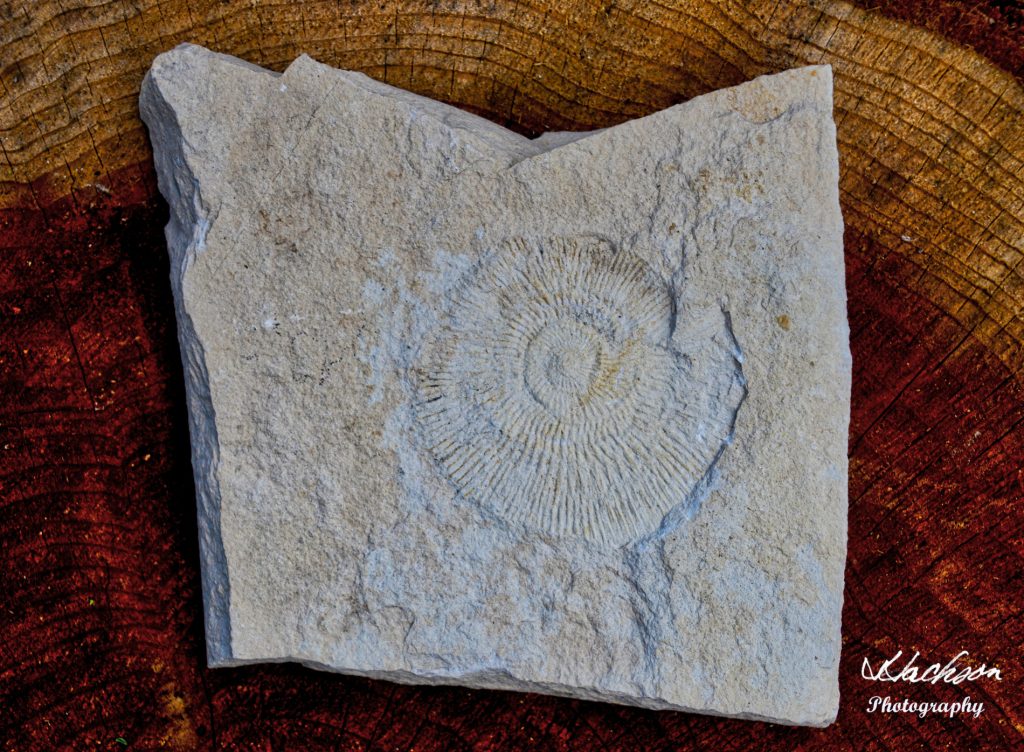 Saint Sola the monk died in 794 A.D. and bequeathed all of his property to the monastery at Fulda. The monks there built Sola a tomb and in 825 A.D. a basilica was erected over the spot. The basilica, one of the oldest architectural masterpieces in Germany, with its Carolingian columns has been preserved and eventually, the name of the town, Solnhofen, would derive from the word “Solahuf.” 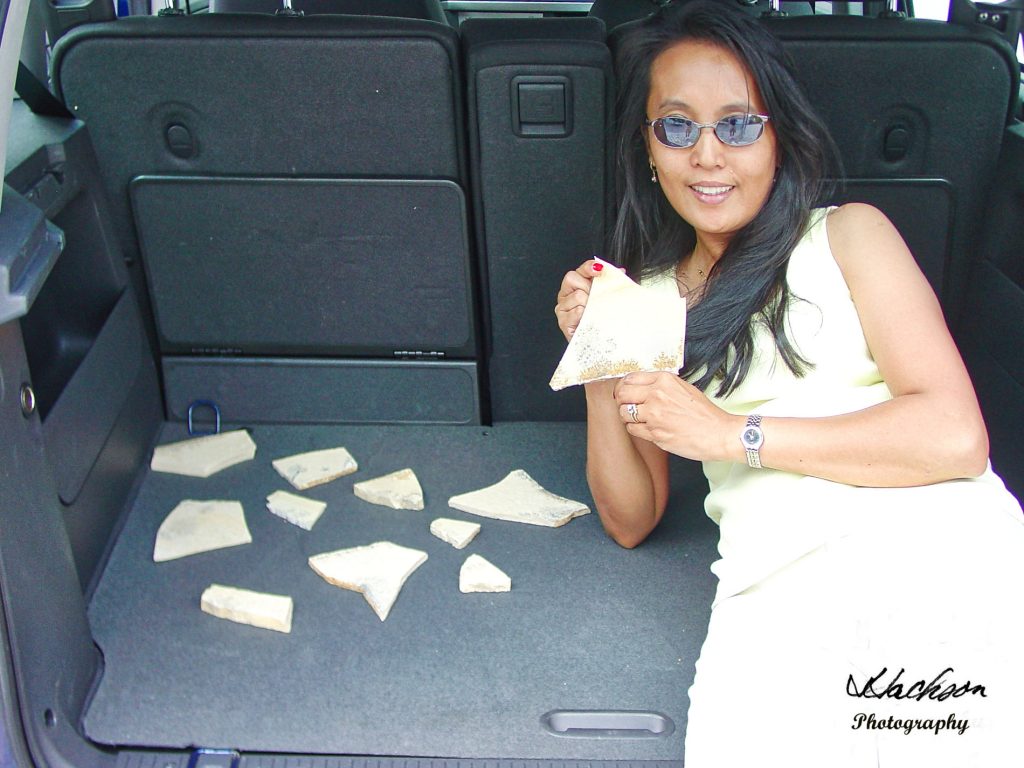 In Solnhofen there is also a memorial that is a tribute to the inventor of lithography, Alois Senefelder, who was responsible for the development of the Solnhofen quarries. As an actor, Senefelder had problems with the printing of his play Mathilde von Altenstein which resulted in his falling deeply into debt. Unable to afford to publish the plays that he had written, Senefelder experimented with an etching process that used a greasy, acid-resistant ink as a resist on the smooth, ultra-fine-grained Solnhofen limestone. His discovery that this process could be extended to allow printing from the flat limestone surface alone made for the first planographic process in printing. 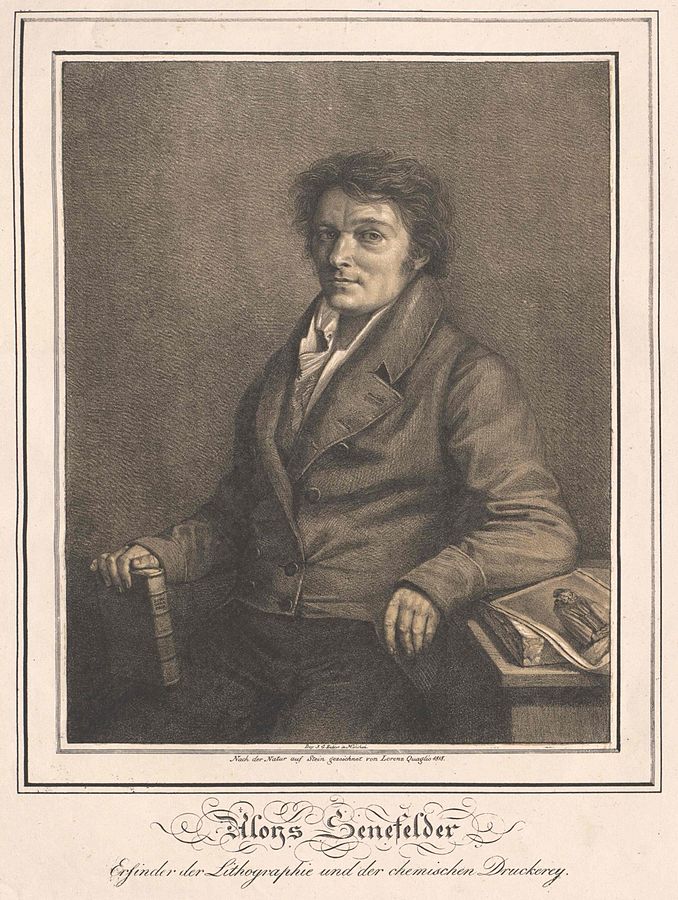 Nothing like a good German beer after a long day of hunting for fossils! 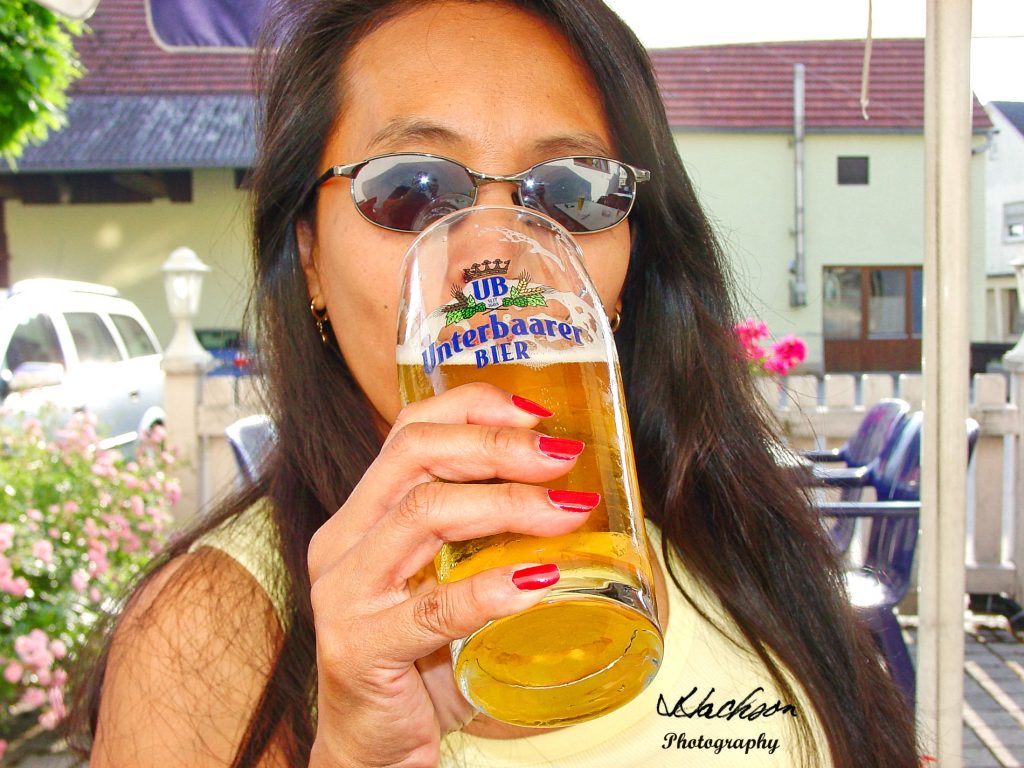 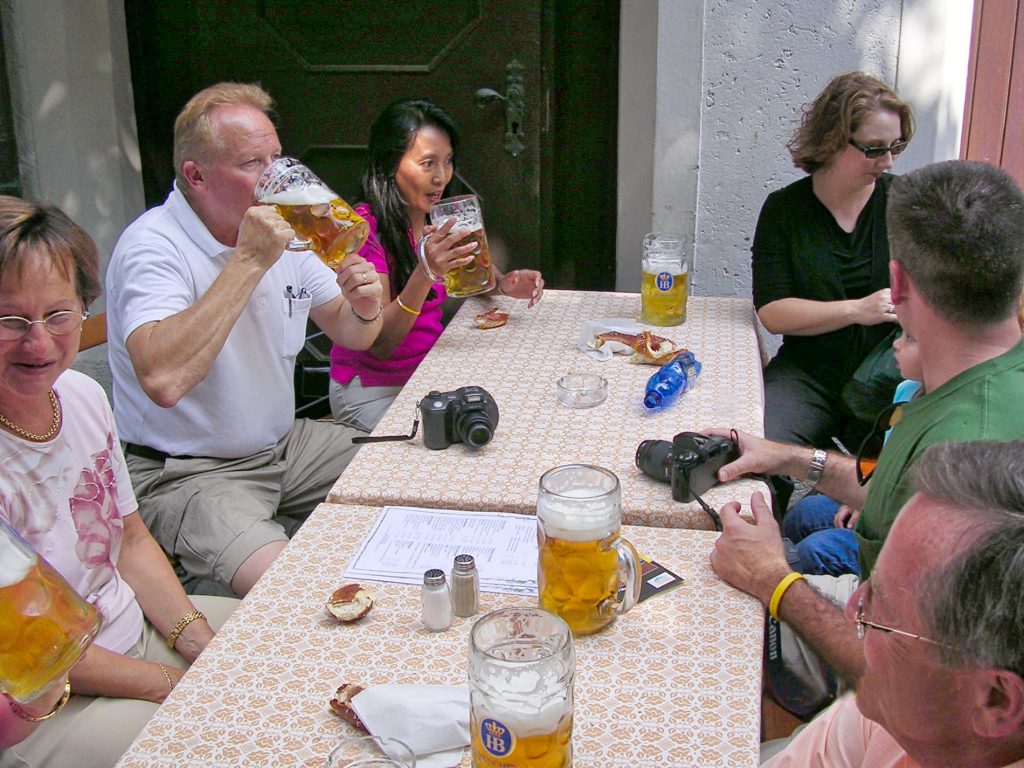 Like I said earlier, hunting for fossils may not make it onto everyone’s bucket list, but a visit to Solnhofen should. It is a wonderful city in a wonderful state– Bavaria, where you can enjoy a romantic drive along the Romantic Road. Is there a more romantic drop in the bucket?