The Parthenon at the Athens Acropolis 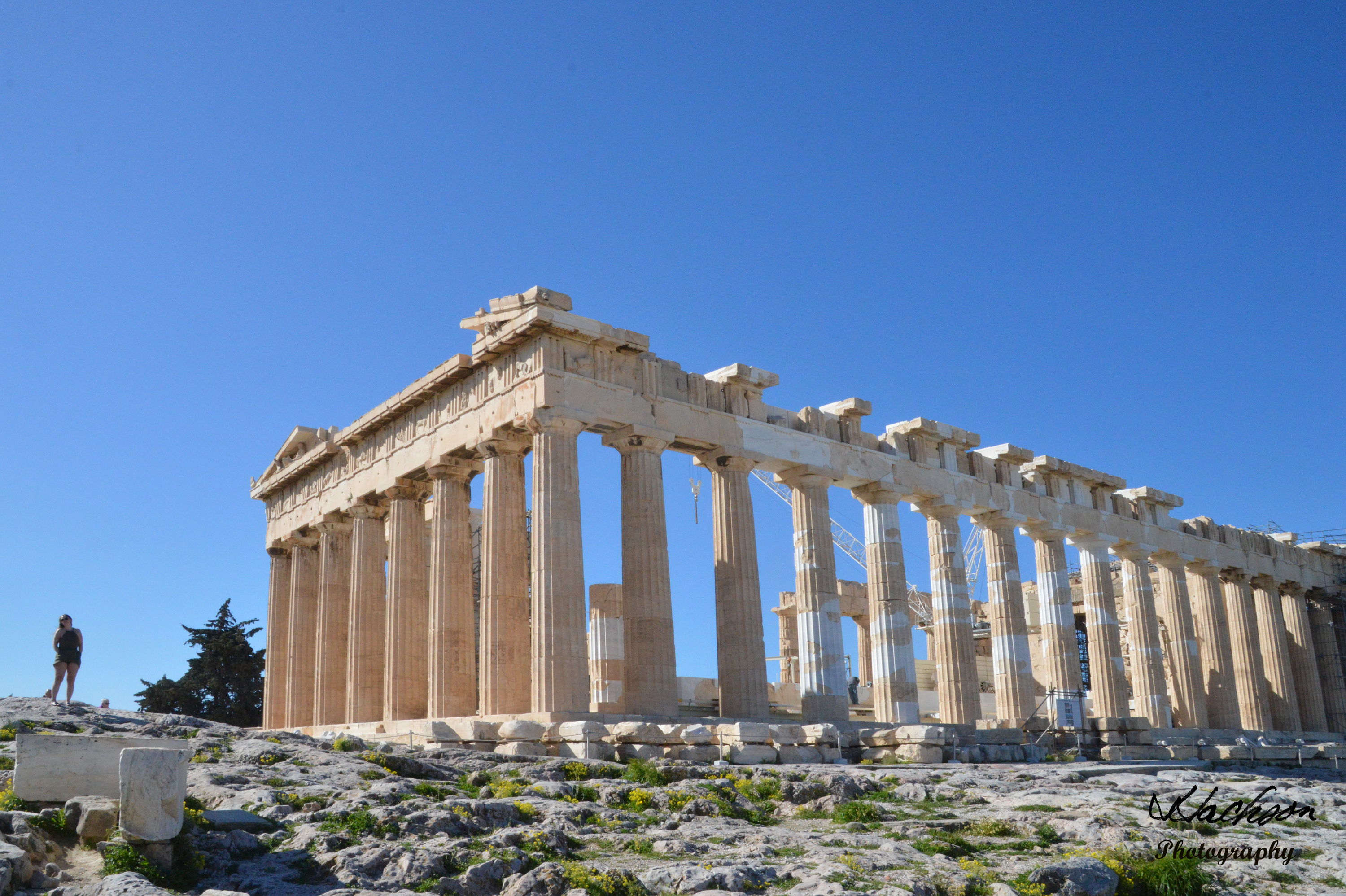 Shaquille O’Neal, one of the greatest centers in NBA history and four-time champion, once visited Greece in the early days of his illustrious career. Upon his return from Europe, a reporter asked, “Shaq, did you visit the Parthenon?” Shaq replied, “I don’t know. I can’t really remember the names of all the clubs that we went to.” 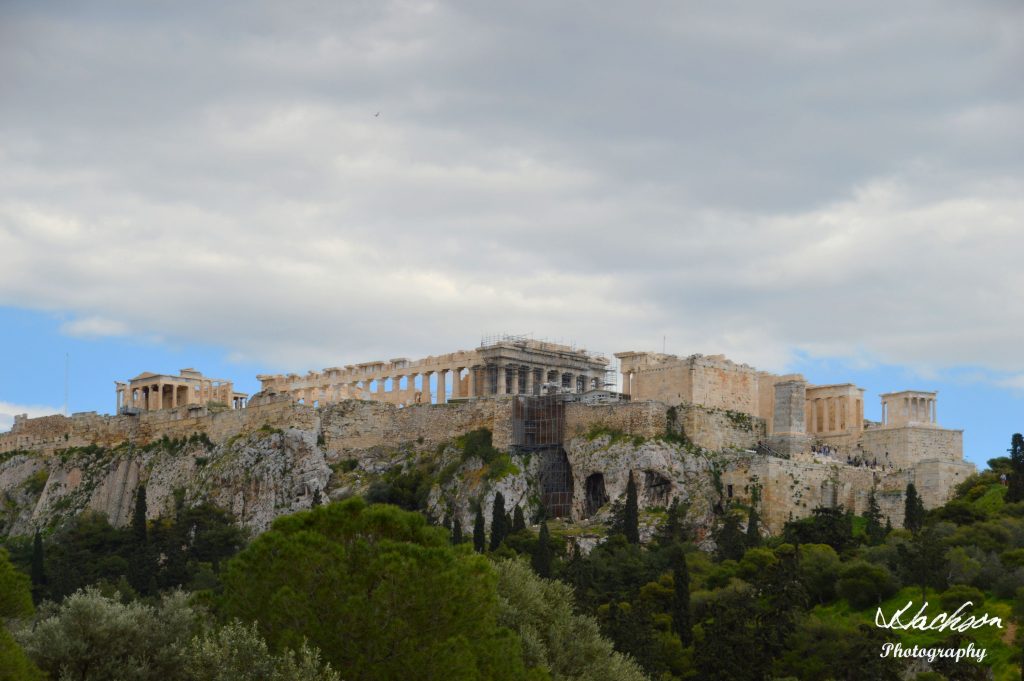 Whether it was another of his many “Shaqisms” or if he really was confused about this iconic wonder of the civilized world, there is some confusion about just exactly what is the Parthenon and the Acropolis. When you visit Athens, Greece it becomes apparent that just about everywhere you may wonder, you will see the Parthenon. And you may have heard it called the Acropolis. Well, let me try to make some sense of this. 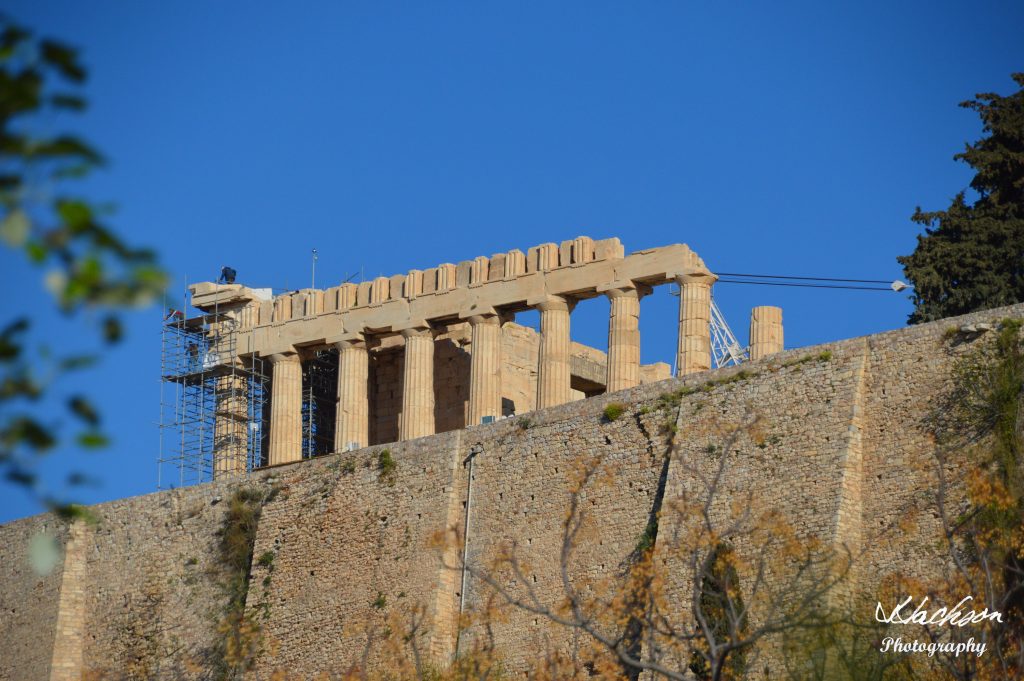 The term “Acropolis” is somewhat generic, as there are several other acropoleis located throughout Greece. The Acropolis of Athens is of such great significance that it is simply known as “The Acropolis” much as a generic adjustable wrench is simply called a “Crescent wrench.” During ancient times the Athens Acropolis was known as the Cecropia, after Cecrops, the legendary serpent-man, and the first Athenian king. 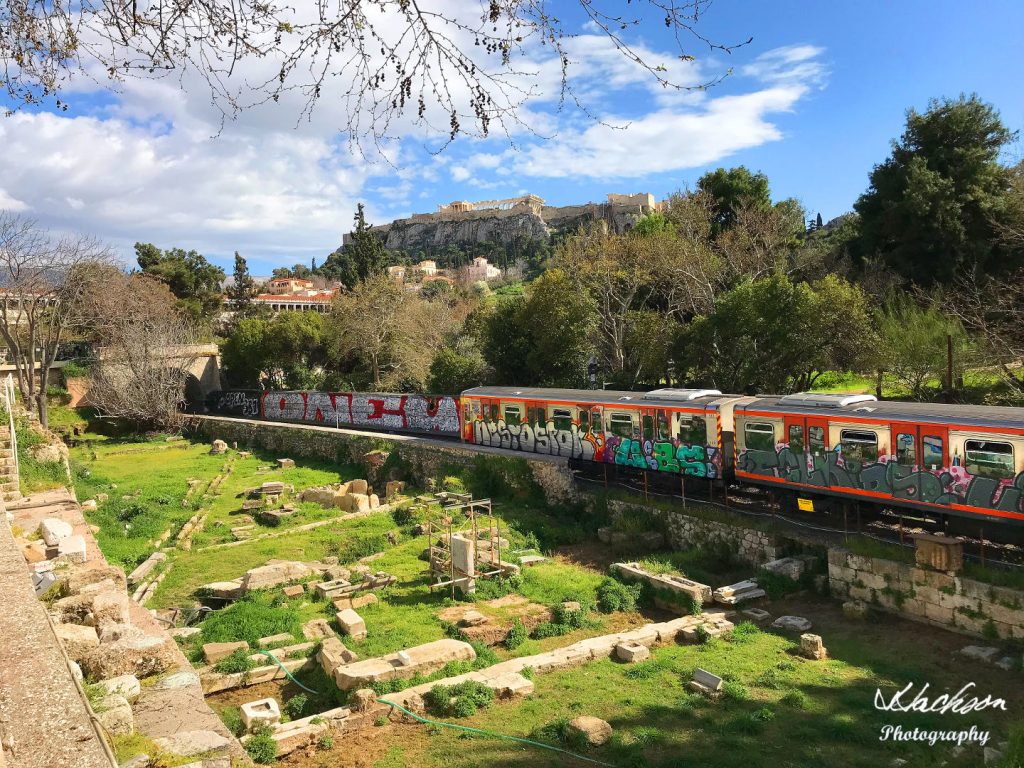 The word “acropolis” is from the Greek words “akron” meaning “highest point” and polis meaning “city”. In Athens, the Acropolis is a rocky outcrop that sits high above the city and contains numerous buildings of not only historical significance but architectural as well. The most famous of these buildings, of course, is the great Parthenon.

You begin your visit to the Acropolis at the base where the magnificent stadium, the Odean of Herodes Atticus, is located.

While there is evidence that the Acropolis was inhabited as far back as the fourth millennium BC, it was Pericles (c. 495–429 BC) in the fifth century BC who coordinated the construction of the site’s most important present remains including the Parthenon, the Propylaia, the Erechtheion and the Temple of Athena Nike. 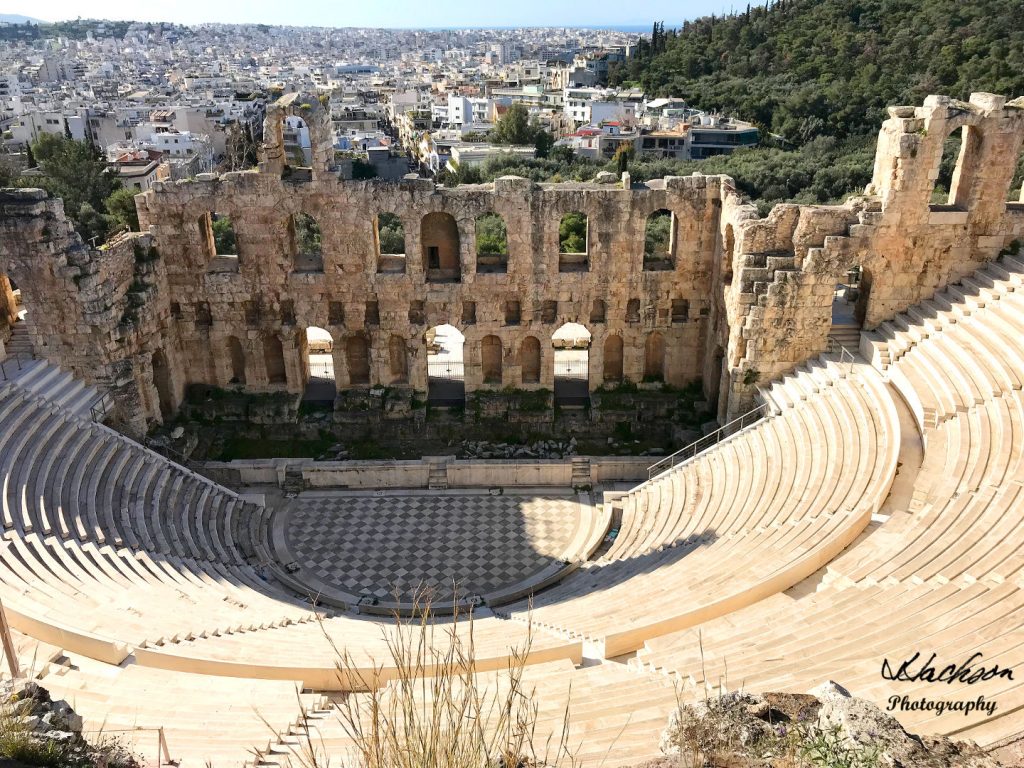 The Odean (Odeion) of Herodes Atticus was completed in 161 AD

In Ancient Greece, citizens built ornate temples to honor and worship their pantheon, or a collective group, of gods, such as Ares the god of war and Hermes the god of travel. The gods had legendary tales of glory, romance, and adventure.

The view from the top

Athens’ patron deity was Athena, the goddess of wisdom and warfare. According to Greek mythology, Athena was born from Zeus’ head. Shortly after her birth, Poseidon and Athena fought over the patronage of Athens. Athena won the battle, and thus, the patronage of the glorious city. She is the syncretized version of the Roman goddess Minerva. 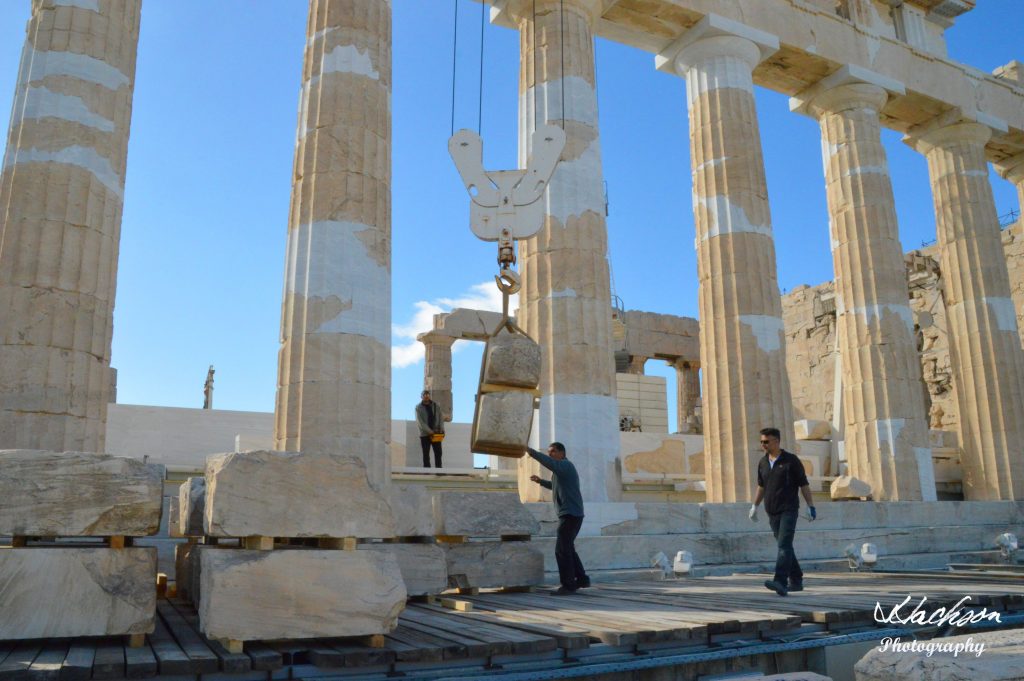 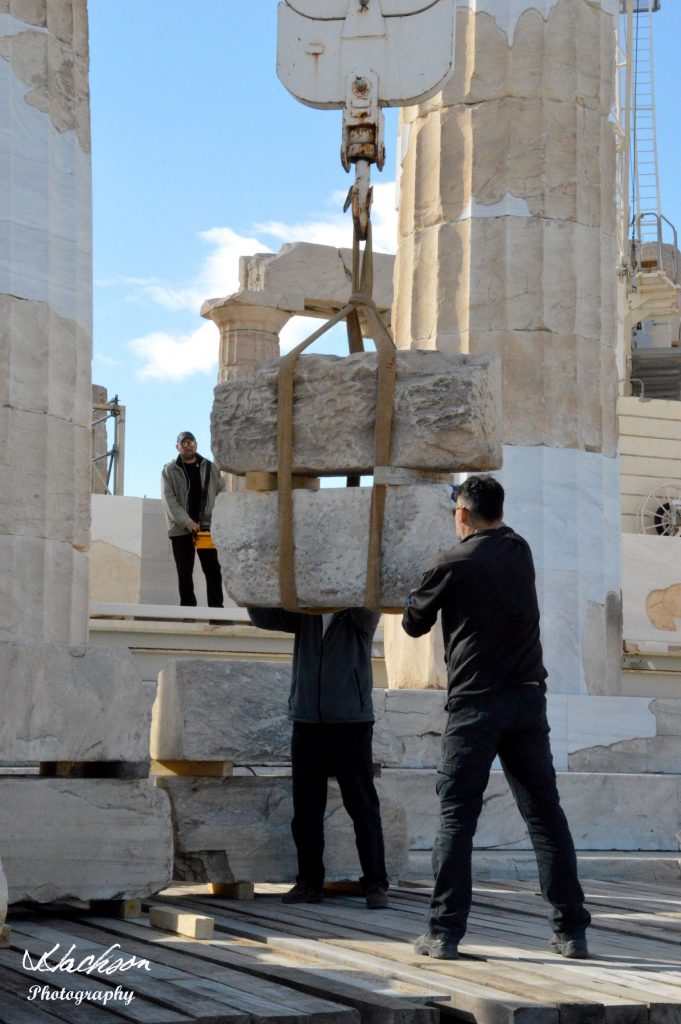 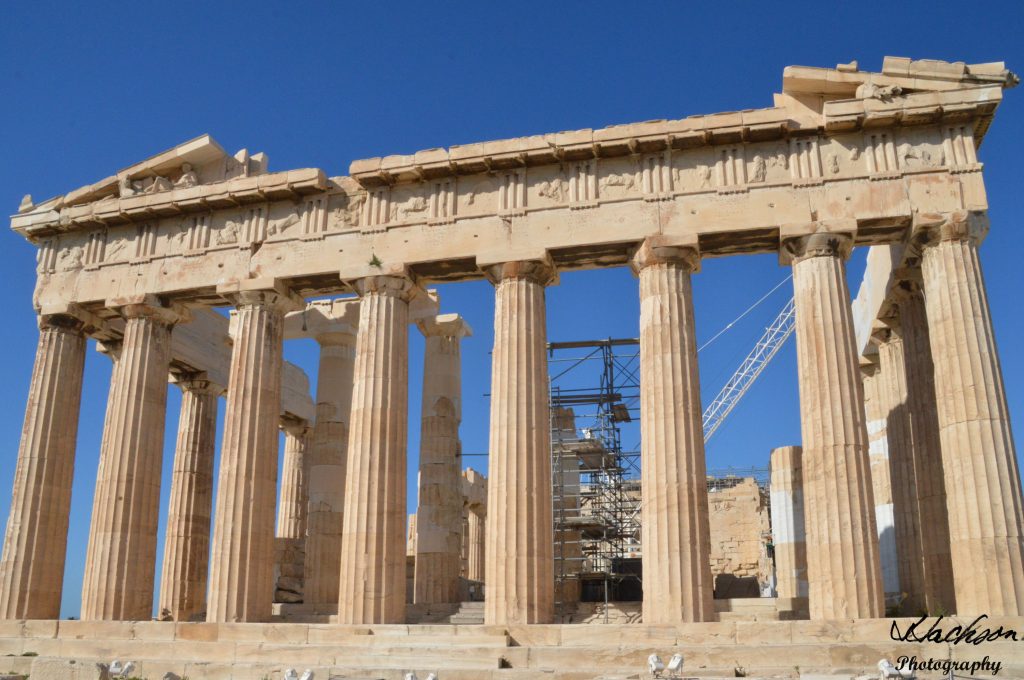 The citizens of Athens built the Parthenon temple to honor Athena

In honor of the goddess Athena, the Athenians built the first Parthenon, beginning in about 490 BC and is often referred to as the Older Parthenon. This original version of the Parthenon was built on a foundation made of soft limestone material. It was destroyed in 480 BC during the Second Persian War when King Xerxes of the Persians sacked Athens. 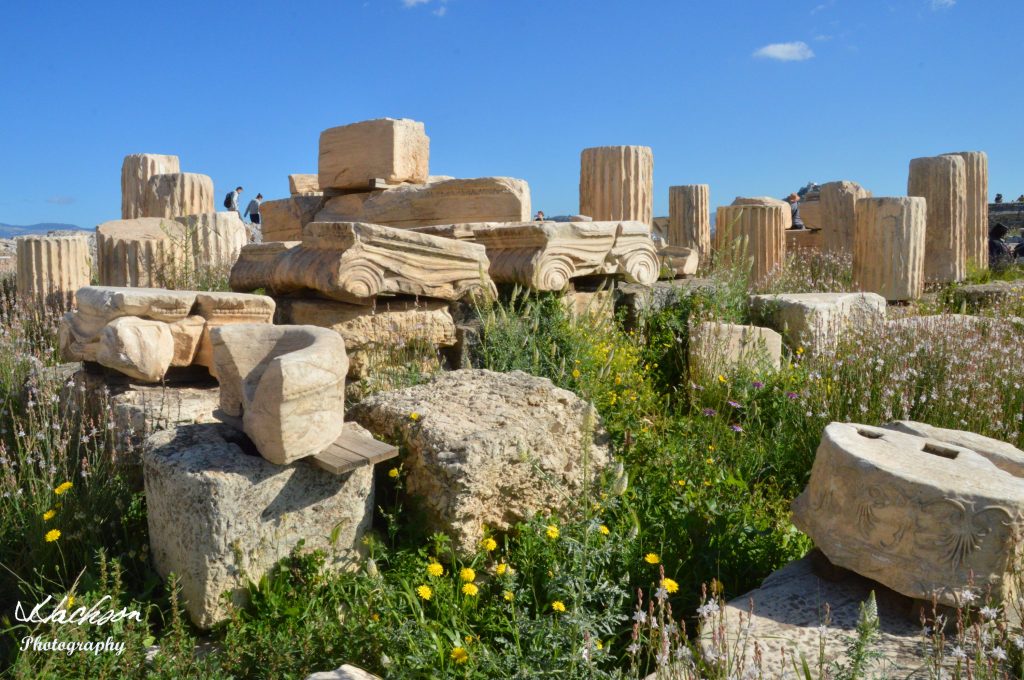 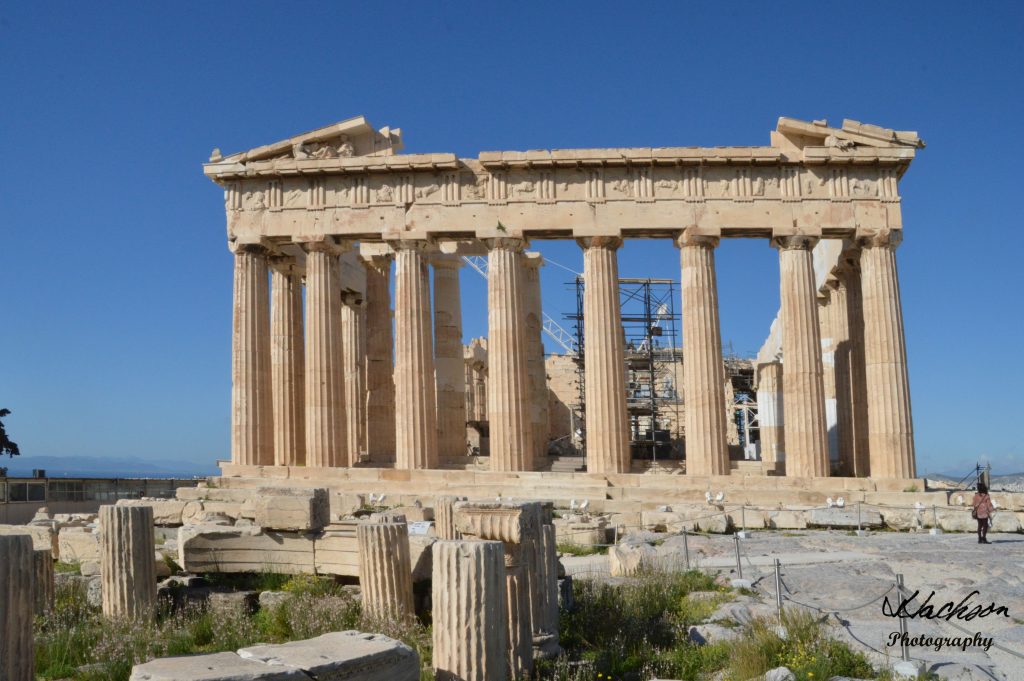 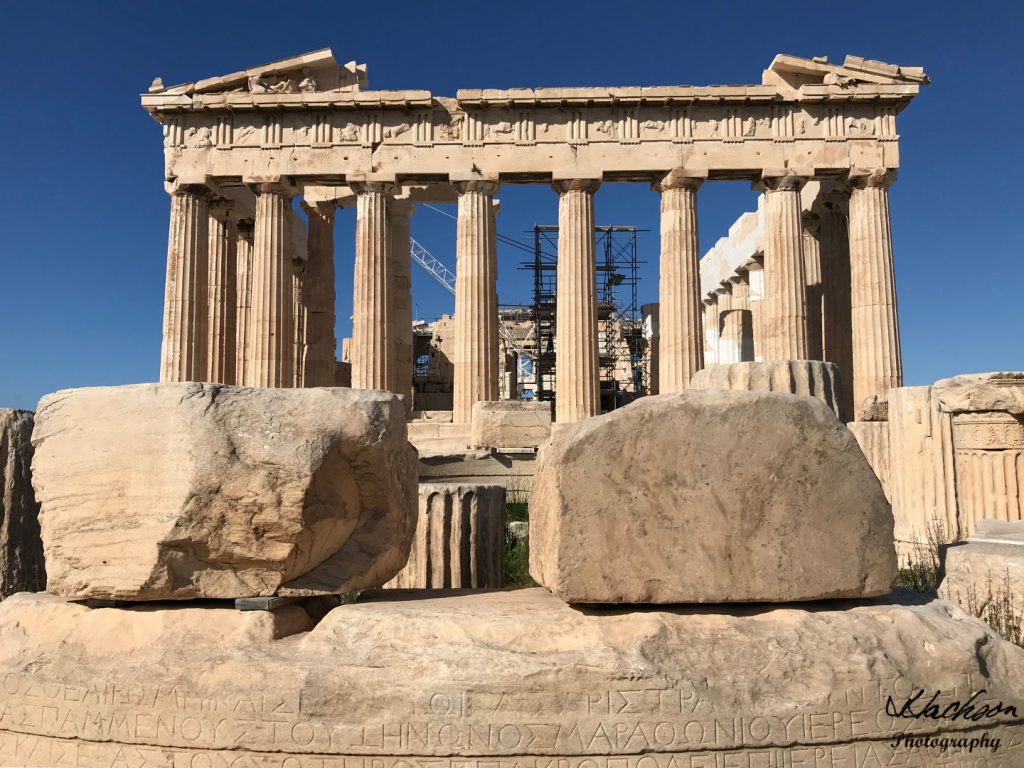 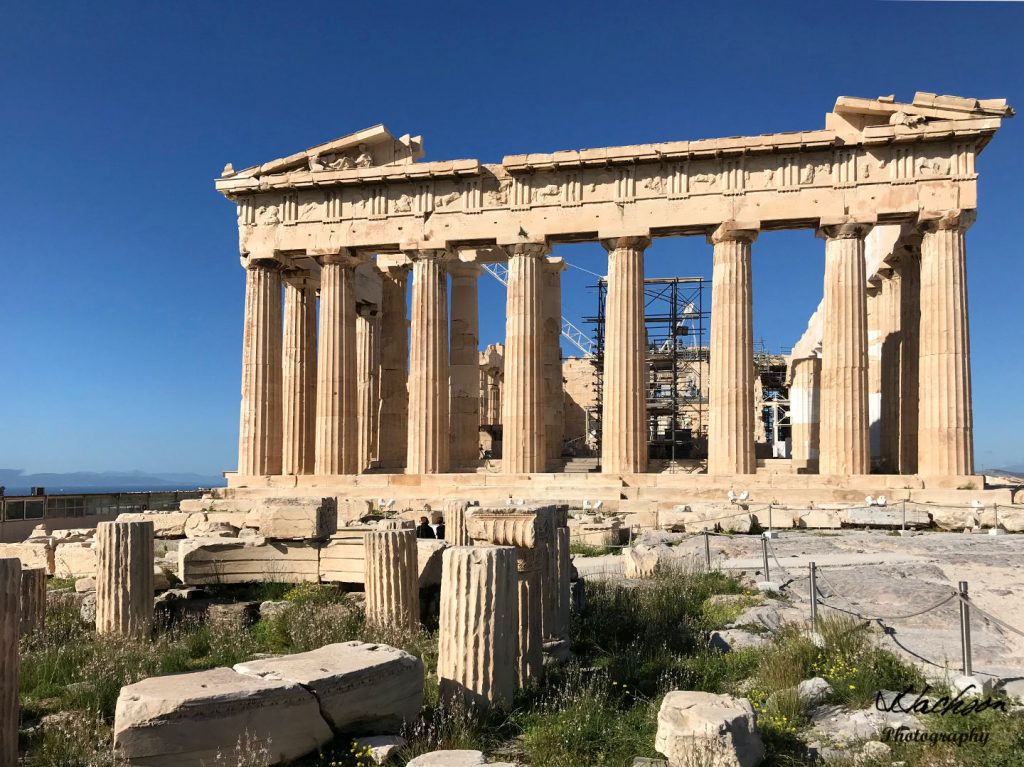 Above, the Parthenon undergoing restoration in 2018

Have you ever wondered what the Parthenon looked like when it was first built? The above photo shows how the marble decorations appeared on one portion of the building.

The so-called Elgin Marbles, housed in the British Museum, came to London directly by way of a systematic plundering by a British lord, Thomas Bruce, the 7th Earl of Elgin. Bruce was the British ambassador to the Ottoman Empire, who had occupied Greece in the early 19th century. Bruce had grown very fond of the ancient marble sculptures and devised ways to remove them and sell them to the British Government. Although it is doubtful that he ever recovered the full amount he paid to have them removed and shipped to England. 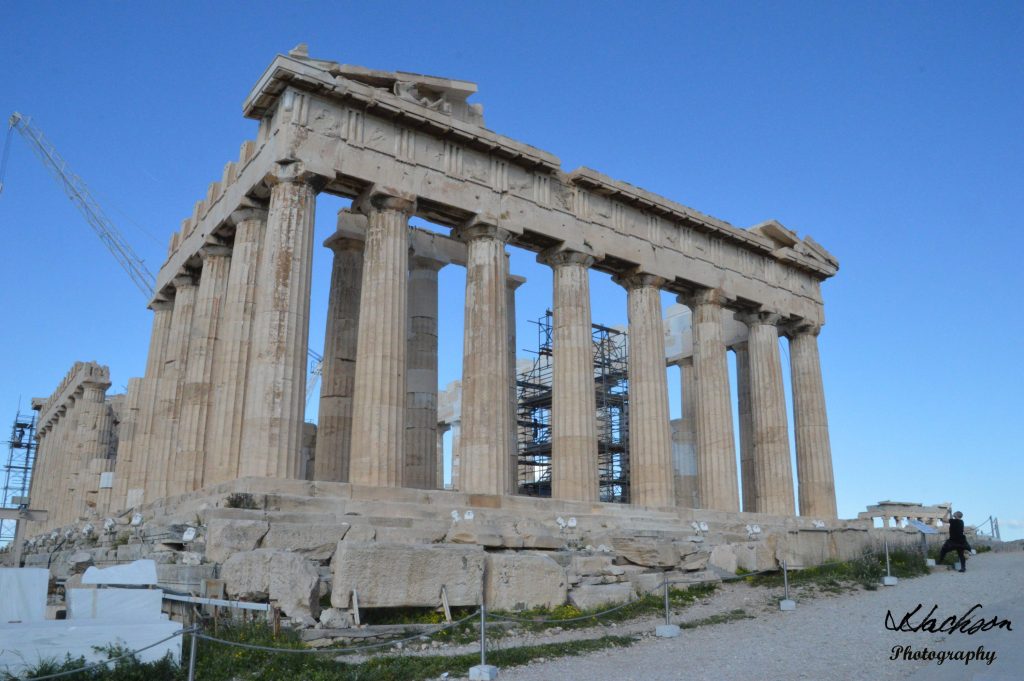 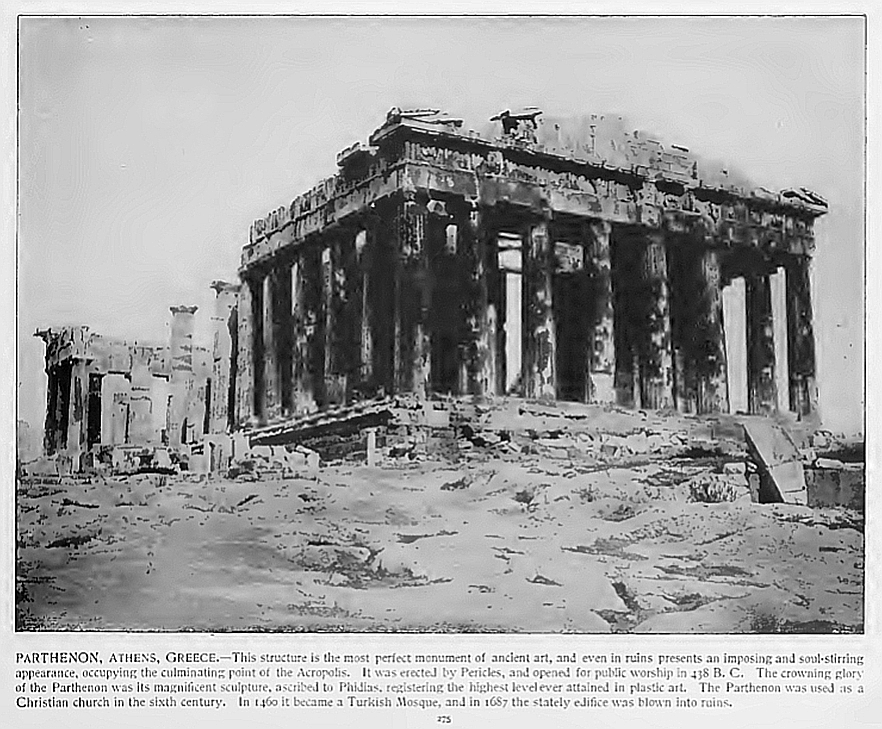 It seems that Athens was undergoing a systematic plundering well before Mr. Bruce and his British compatriots arrived there. Many speculate that Bruce actually saved many of the statutes from further pillaging which had been going on by locals. Unfortunately, many statues and artifacts were lost when one of his ships that were transporting the artwork back to England sank during a heavy storm in the Aegean Sea. 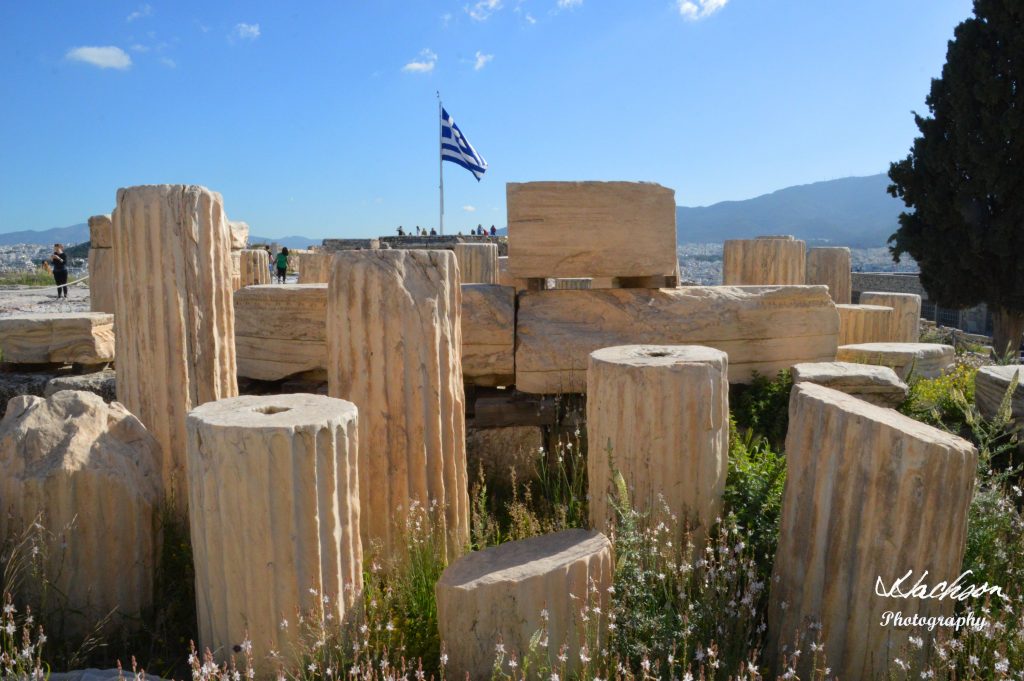 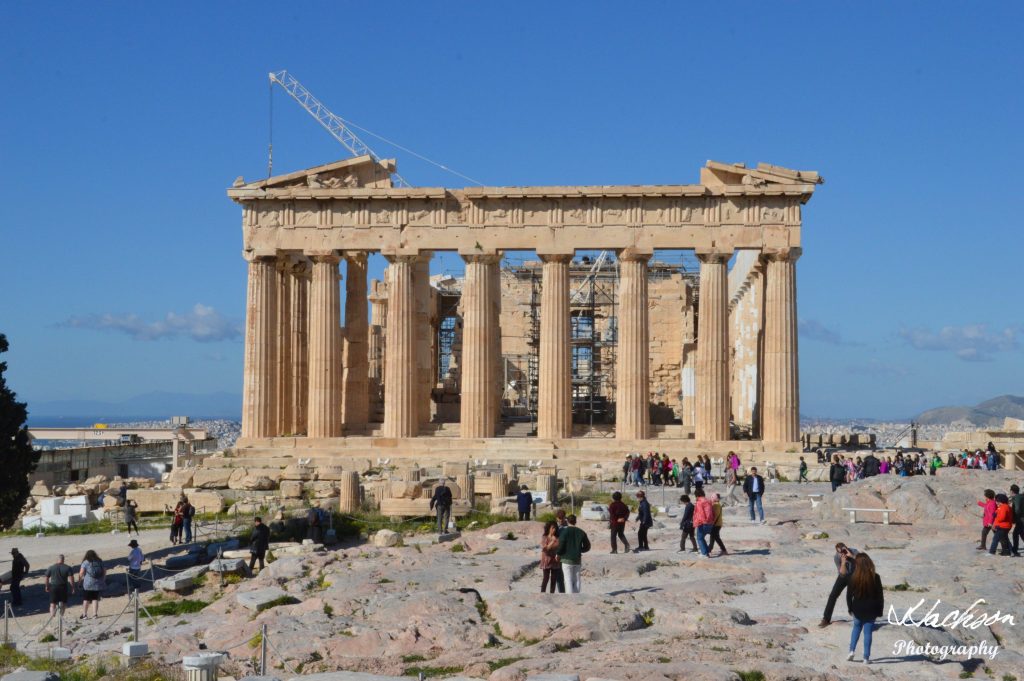 When Bruce began his extraction of so many priceless works of antiquity in 1801, he claimed that the Ottoman sultan had given him permission to remove anything that he liked, as long as it did not interfere or jeopardize the walls of the ancient citadel.

When the Bruce plunder was completed in 1805, and under heavy protest that he ruined Athens, the British Government went ahead and purchased his loot in 1816 which has been housed in England ever since. 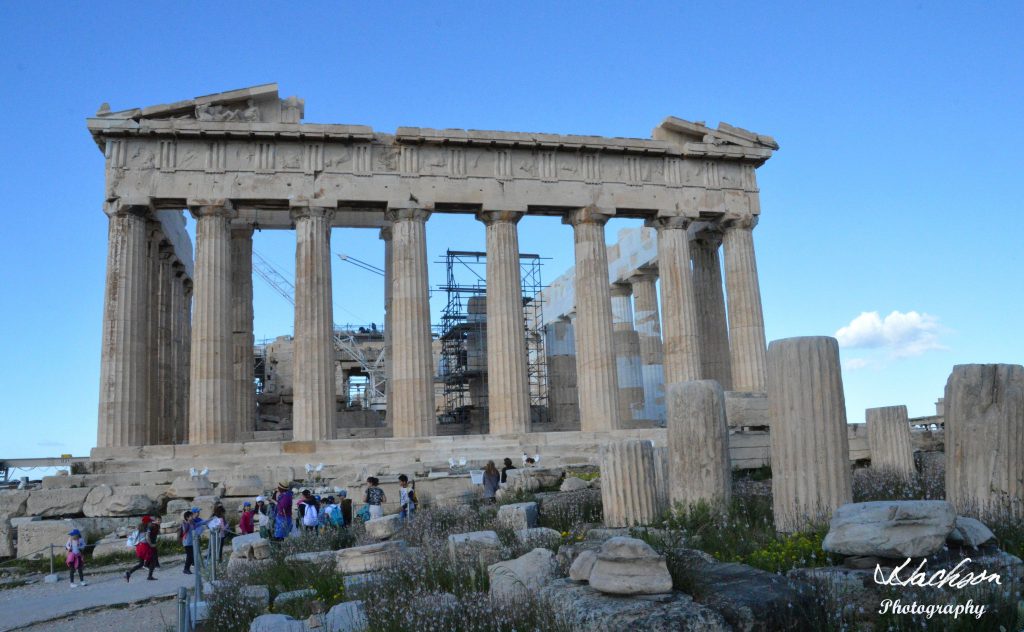 The columns of the Parthenon were constructed to be wider in the middle and thinner at the top. This was done as an optical illusion to make the columns appear as though the heavy timber roof was putting excessive stress on the columns. 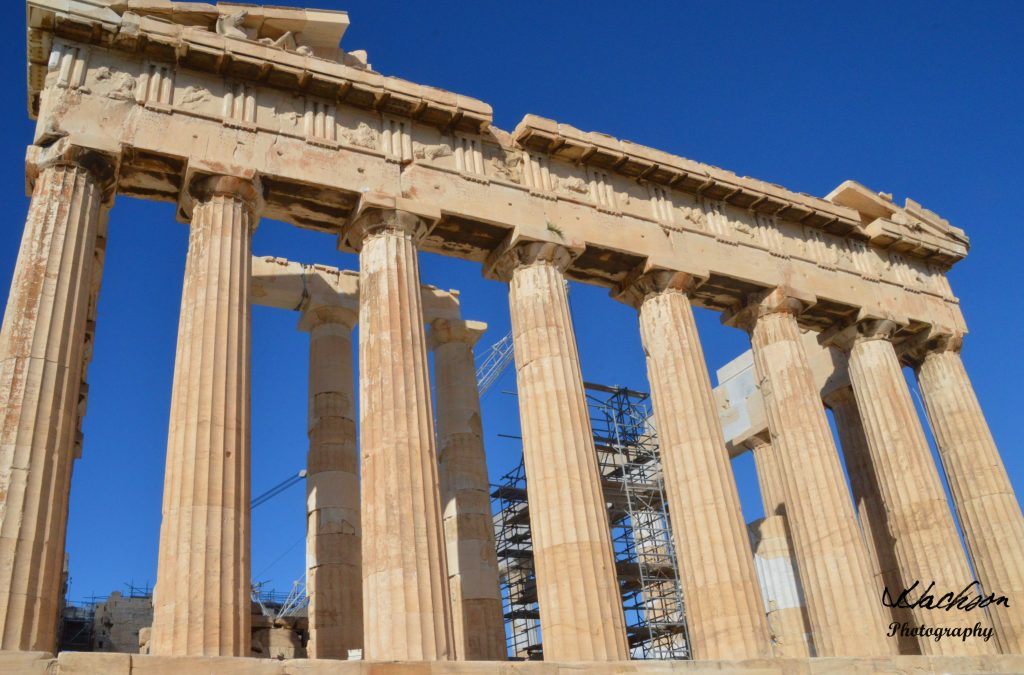 The roof of the Parthenon had to be constructed of lumber because any other material that was available at the time would have been too heavy and the roof would have collapsed. The builders used wood they had gotten from the boats of their defeated Persian rivals! 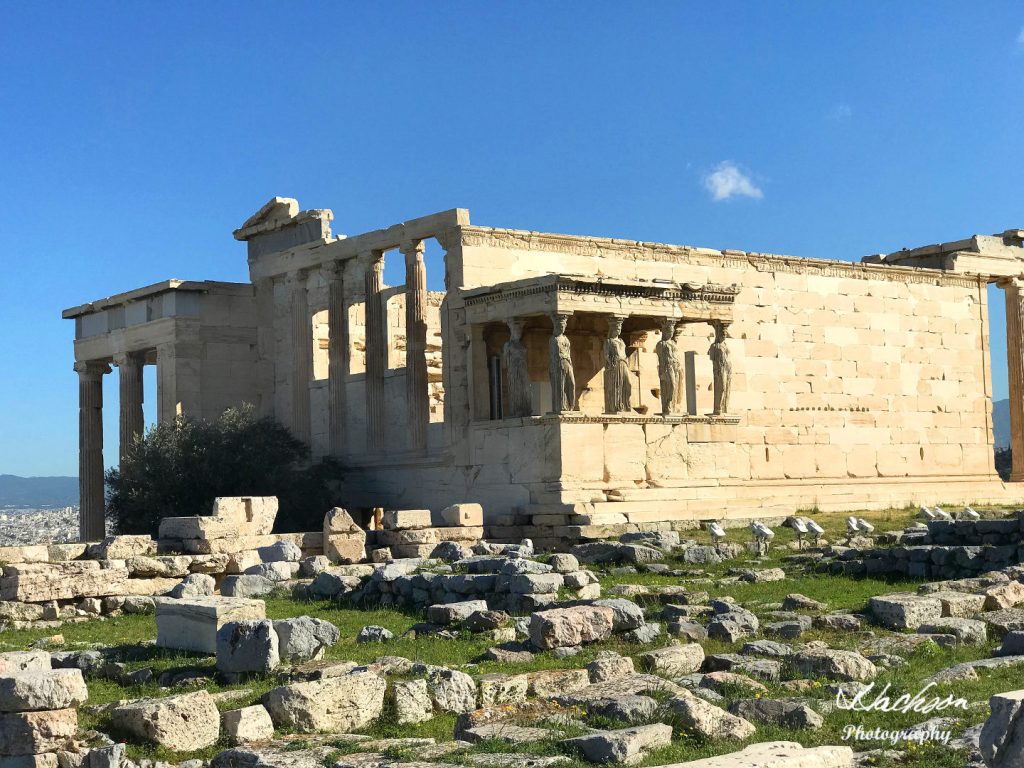 Above, the ancient Greek temple, the Erechtheion (or Erechtheum), was dedicated to both the god Poseidon and the goddess Athena. It sits on the north side of the Acropolis of Athens and was built between 421 and 406 BC. 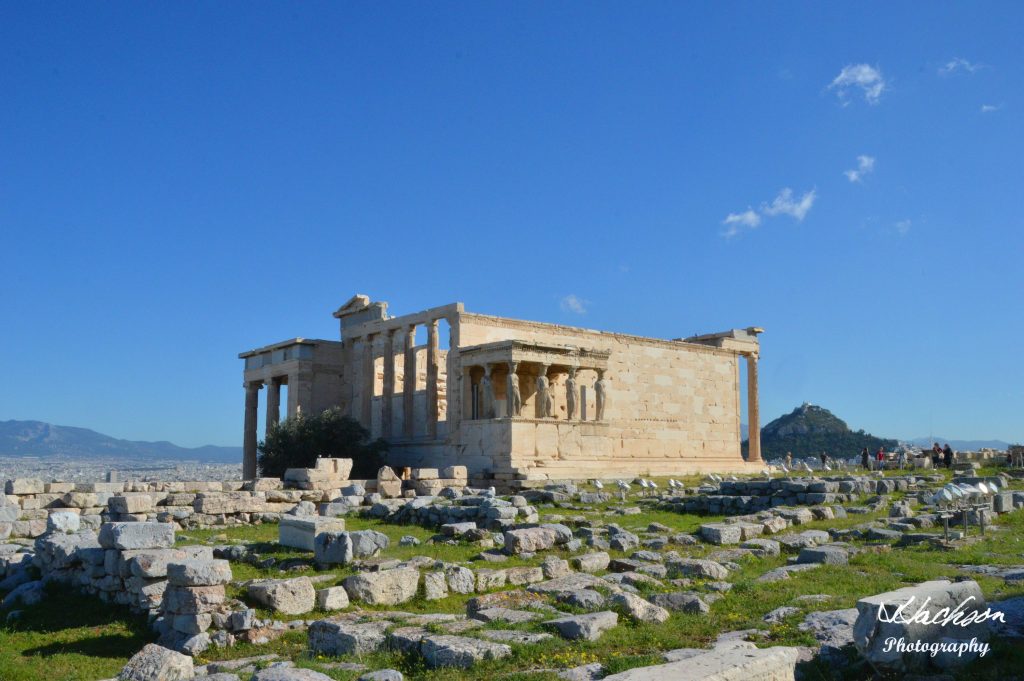 It is speculated that the architect Mnesicles may have designed the building and it derived its name from a shrine dedicated to the legendary Greek hero Erichthonius. The sculptor and mason of the structure was Phidias, who was employed by Pericles to build both the Erechtheion and the Parthenon. 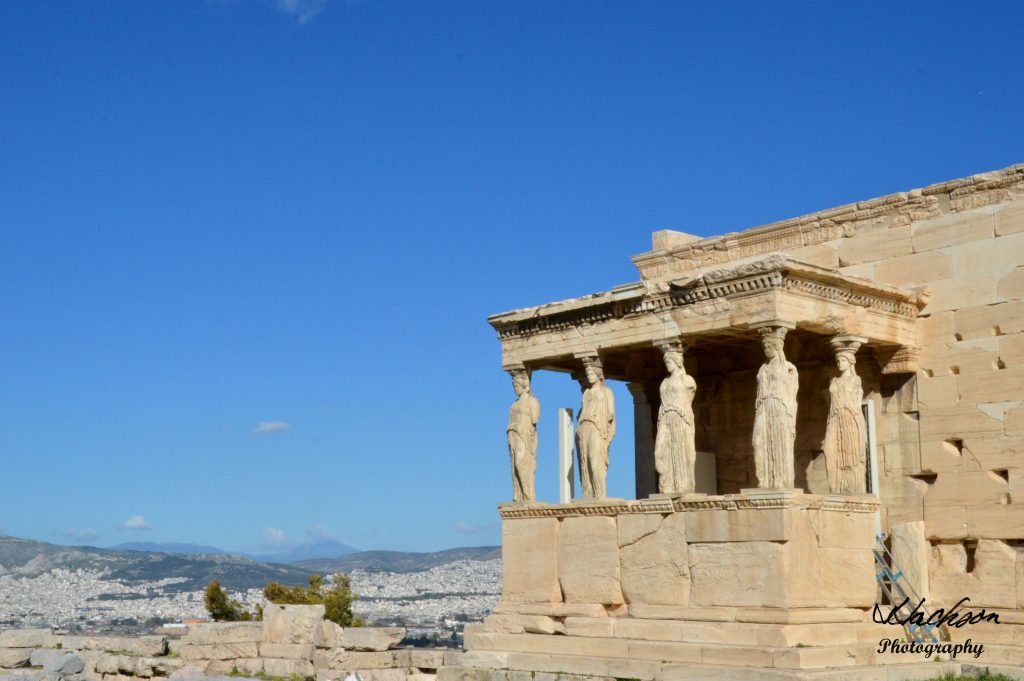 Some have suggested that the Erechtheion may have been built to honor the legendary king Erechtheus, who is said to have been buried nearby. In the Illiad, Homer mentions Erechtheus as a great king and ruler of Athens during the Archaic Period. The Erechtheion is believed to be a replacement for the Peisistratid temple of Athena Polias that was destroyed by the Persians in 480 BC. 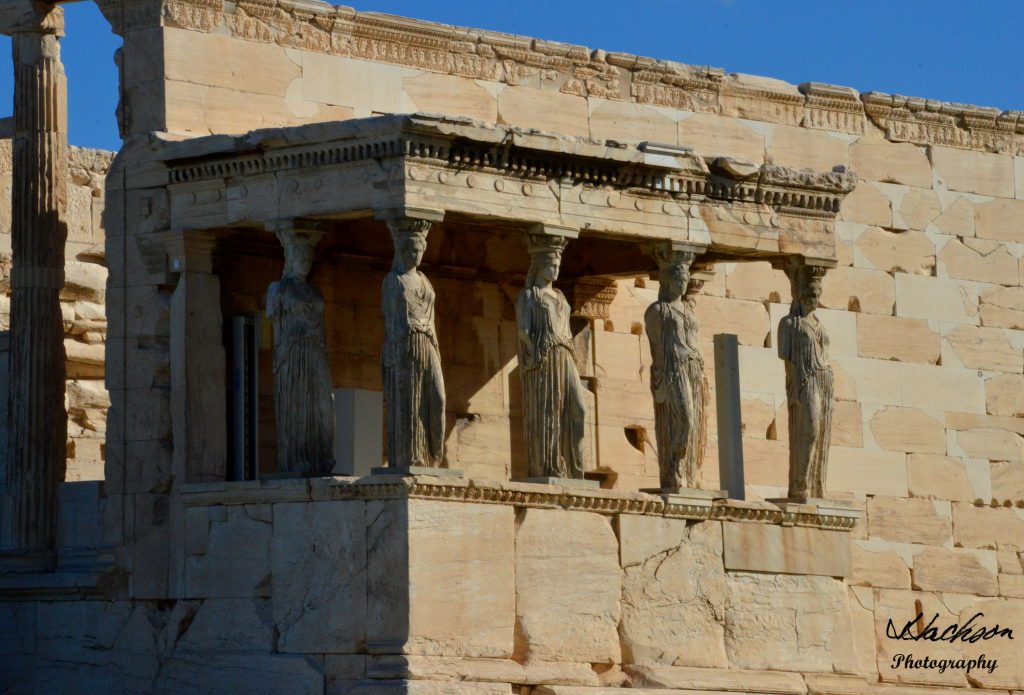 Standing atop the Acropolis and standing among the ruins gives you a better understanding of the history that you were taught in school about the Greeks and their gods and goddesses. You can really feel the history here. 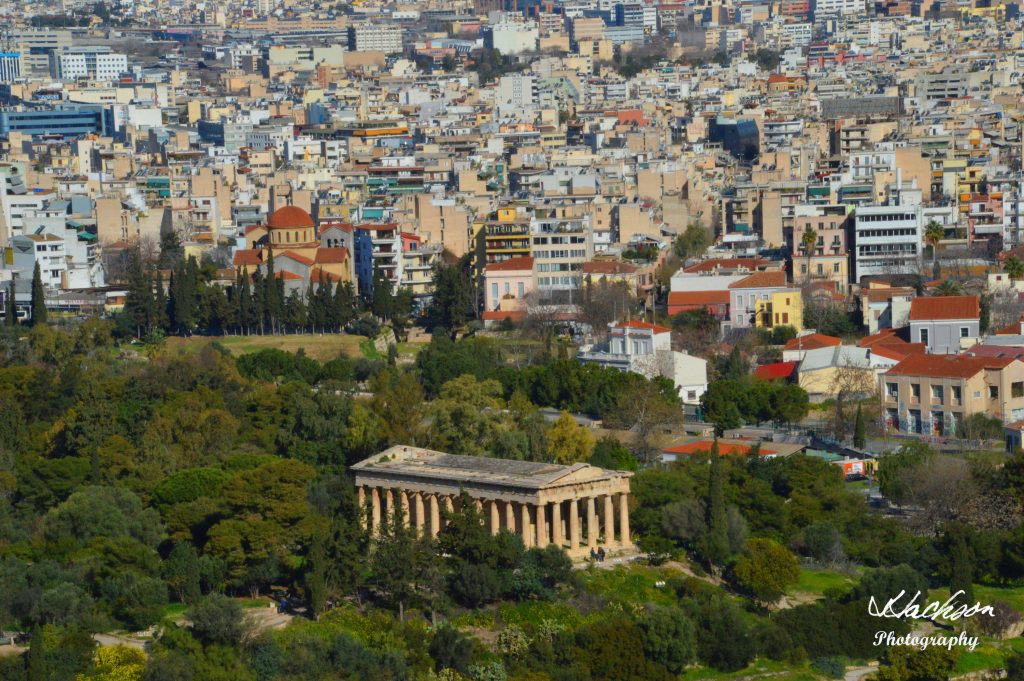 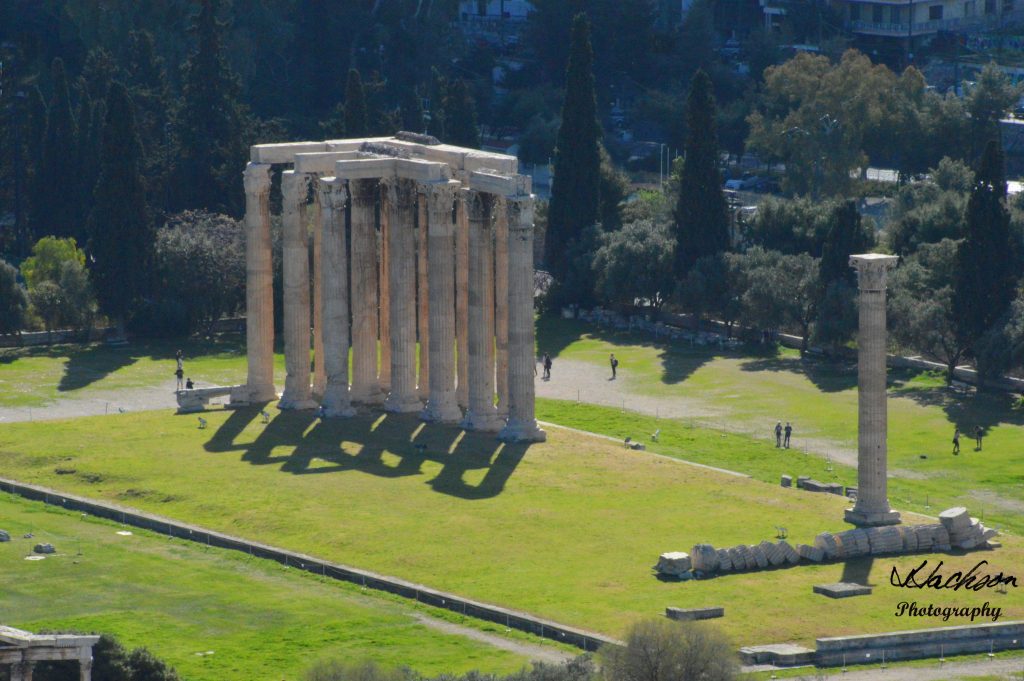 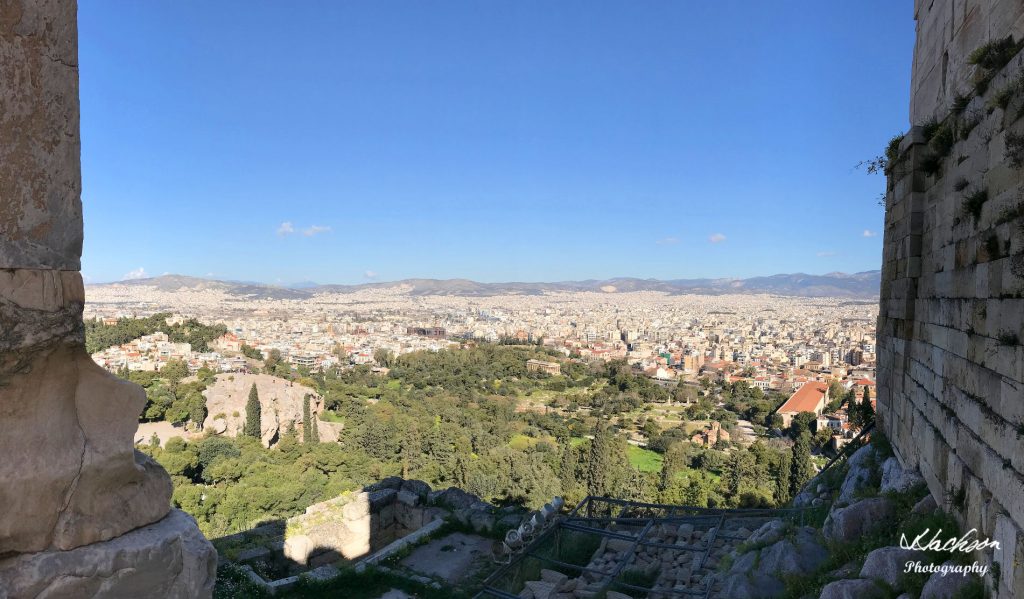 From the top of the Acropolis, you see the history all around you and also below you in the city of Athens. Considered one of the greatest manmade wonders of the world, the Acropolis of Athens should be a drop in everyone’s bucket!